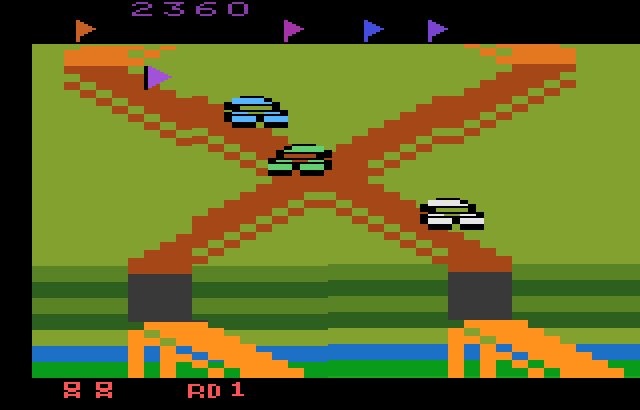 Despite the ho-hum name, this was one of my arcade favorites way back in "the day". The object is to navigate your "buggy" (which looks like a Volkswagen Bug) down some single-lane, zigzagging streets, collecting flags and avoiding collisions by jumping over (or onto) other cars. I was really looking forward to reliving the thrills of my youth through this 2600 cartridge. Imagine my dismay when I turned this thing on and saw some of the most horrific graphics I've ever seen.

The blocky, jagged roads look more like steps, and those cars are pixelated blobs! Vehicles and flags flicker badly and often disappear completely. This is one of the worst looking games I've ever seen on the Atari 2600, and that's saying something. After the initial shock, I started warming up to this game. The controls aren't bad; you can easily change speeds, and I soon remembered that jumping is not only for squashing cars, but also for leaping from one road to the next.

Once you collect all the flags, you're off to a totally different course. The roads are poorly rendered, but you start to learn where the bridges and hills are by the color scheme. The game is seriously challenging and undeniably fun. I really couldn't put it down once I started playing it. The background music is annoying, but at least it's faithful to the original game. When all is said and done, I like Up 'N Down. If you can stomach the graphics you're in for a good time. © Copyright 2002 The Video Game Critic. 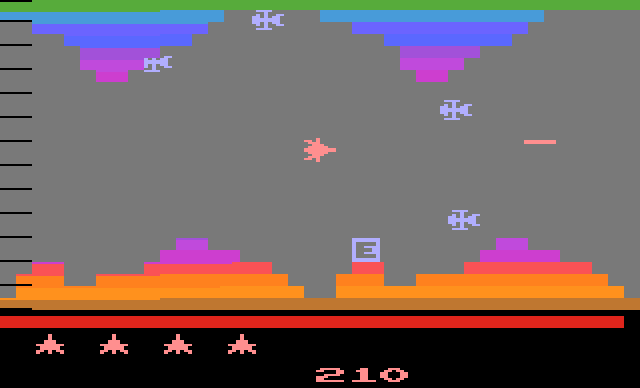 Vanguard can be fun if you have a reliable arcade-style joystick. This shooter introduced several original concepts to the world of arcade games, including stages that scroll in different directions, the ability to shoot in four directions at once (!), and invincibility power-ups. But perhaps its most significant innovation was the "continue" feature, which let you pay another quarter and pick up where you left off. Like it or hate it, the continue feature caught on in a big way.

This Atari 2600 edition of Vanguard attempts to incorporate the same features but comes up a bit short. For one thing, it doesn't do a good job of simulating the dual joysticks of the arcade game. In this version, pushing the joystick in any direction not only fires in that direction but moves your ship slightly. Holding down the fire button lets you move quickly but halts your firing. Typically players will rotate the joystick rapidly to maximize their firepower but gradually meander around the screen. It really hurts your arm after prolonged play. Atari half-heartedly addressed this problem by supplying the option of automatic forward fire, but that makes the game entirely too easy.

Vanguard isn't much to look at, and even the rainbow colors can hide the horrid blockiness of backgrounds. Vanguard does have a nice variety of stages, each of which brings its own unique style of play. The zones scroll horizontally or vertically but not diagonally. The "stripe zone" is the most interesting, with two different paths and two sets of adversaries. The "bleak zone" features floating snakes that you can "dock" with for big points. The trick is to shoot the snakes just before docking, so you can collect the points for killing them (you can only do this three times).

Vanguard's most disappointing stage is the "gond" (remember the commercial? "Luther kills the gond!"). This blocky rainbow snowman is supposed to be the "boss", but all you do is shoot him in the face. It's hardly a challenge and definitely anti-climactic. The second level features the same set of stages, only harder and in a different order. Vanguard isn't a great shooter, but it's certainly original, and it'll give your arm one heck of a workout. © Copyright 2004 The Video Game Critic. 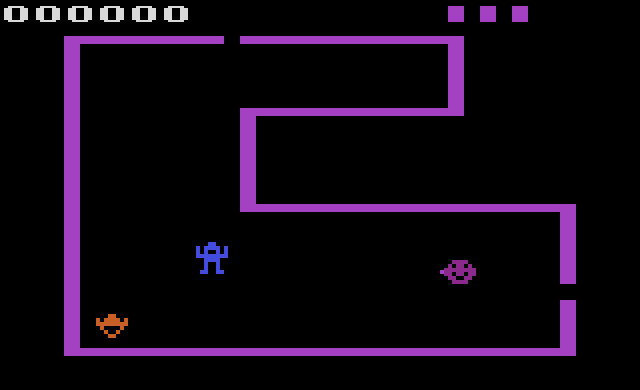 This bare-bones adventure game involves entering rooms, shooting monsters, and grabbing treasure. I've enjoyed Venture on several other systems (notably the Intellivision), but this version waters down an already minimal game to practically nothing. The arcade version was simplistic enough, but this translation strips it down to an unacceptable level.

The blocky monsters are mere static images, and shooting them results in a pixelated mess. Your so-called "arrows" are single pixels! Your smiley-face character is easy to control, but he moves like a snail! This is a serious problem considering the impatient hall monsters tend to invade your room before you've even had a chance to snag the treasure.

When you do "conquer" a room, it doesn't even fill in on the map screen, so you have to remember which rooms you've finished (lame). Lastly, the game only offers two sets of rooms for a grand total of eight! And I thought the twelve rooms in the other versions were lame! Venture for the Atari 2600 is a weak effort, reflecting poorly on a very fun arcade title. © Copyright 2006 The Video Game Critic. 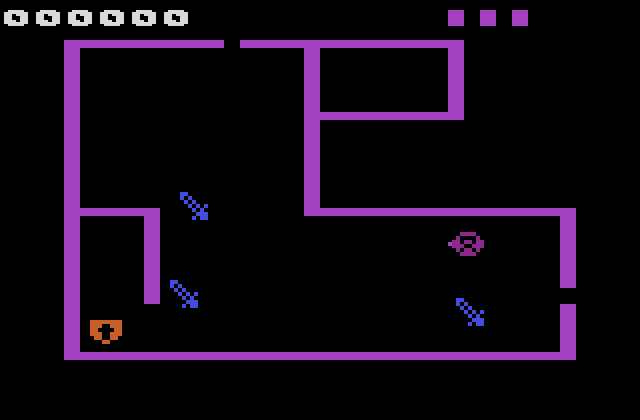 Tim Snider has brought new life to the venerable adventure game, creating new monsters, treasures, and more complex dungeons. The dungeon layouts are basically the same, but now the rooms have extra walls. This is a double-edged sword. Although the rooms are more interesting and allow for more strategy, they can also cause frustration as you easily get hung up on them. I found the new monsters to be pretty interesting and original. This time you'll encounter floating swords, swarms of bugs, and octopus among others. Venture II is a nice effort, but it still has the flaws of the original game. © Copyright 2001 The Video Game Critic.
Find Venture II The Abysmal Abyss on eBay, Amazon, YouTube
Copy link to this review
Recommended variation: 2
Our high score: 5,500
1 player
If you like this game, try: Venture (Intellivision),
Venture (Atari 2600), Venture (Atari XEGS),
Montezuma's Revenge (Atari 2600), Venture (Colecovision)
Video Checkers
Grade: F
Publisher: Atari (1980)
Reviewed: 2001/10/17 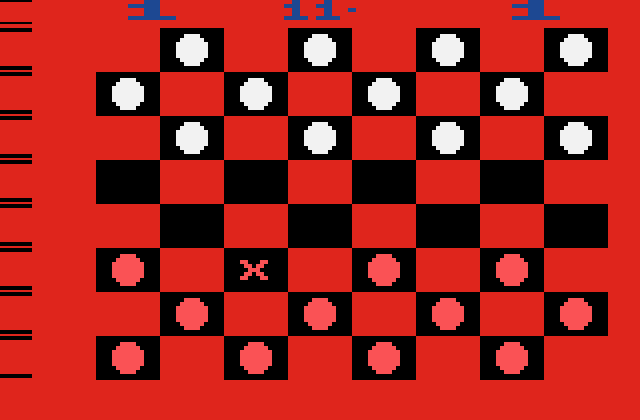 Checkers isn't the most exciting concept for a video game to begin with, and this particular version has other problems to boot. An awkward control scheme forces you to move the joystick diagonally, which is painful if you're using a standard 2600 joystick. In addition, although the computer response is fast during the easy levels, the wait can be unbearable (up to eight minutes!) in the advanced ones. You'll just have to stare at a black screen while the computer decides what to do next. There are 19 game variations, but it's overkill. Check out the artwork on this game - that looks like Luke Skywalker! © Copyright 2001 The Video Game Critic.
Find Video Checkers on eBay, Amazon, YouTube
Copy link to this review
1 or 2 players
If you like this game, try: Checkers (Atari 2600),
Skiing (Atari 2600), Backgammon (Atari 2600),
Rubik's World (Nintendo DS), Pitfall (Atari 5200)
Video Chess
Grade: D-
Publisher: Atari (1978)
Reviewed: 2009/9/8 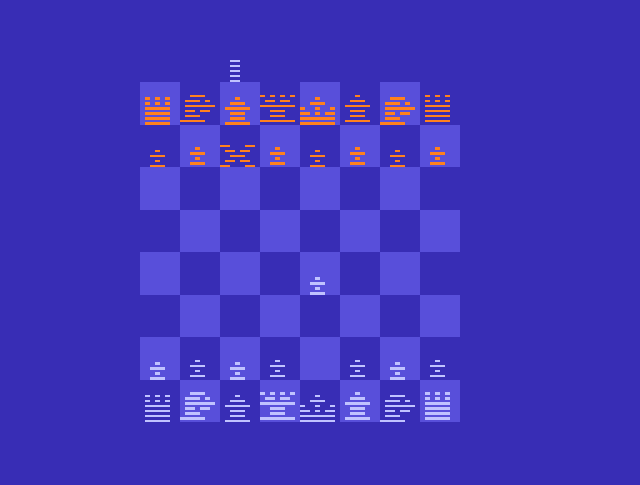 I love the art on old Atari cartridges. The labels feature artistic illustrated collages that suggest the game is about ten times more sophisticated than it actually is. It's easy to visualize games like Asteroids and Football, but what about Video Chess? Atari found a way. The picture has chess pieces superimposed over checkerboards, along with some colorful circuits that suggest a mainframe computer (circa 1965). There's also a guy reaching for a chess piece, and you know he's smart because he's a balding middle-aged man with a beard (and he's wearing a white buttoned-down shirt for Pete's sake!).

A technical marvel in its time, Video Chess has not aged well. The chess board consumes about half of the screen, and the small pieces look awful. The orange pieces are a pixelated mess, and the white ones look like stacks of horizontal lines. The interface for moving pieces around is slow and awkward. While the CPU is calculating its turn, the screen flashes random colors, instantly sending epileptic players into violent seizures and convulsions. Depending on the skill level, the CPU can take anywhere from seconds to hours to calculate its next move!

On the hardest level (7) the CPU can take up to 10 hours between moves! Hell, you could be playing this God-forsaken game for months on end! Adding insult to injury, it's a proven fact that the CPU will actually cheat on occasion! How pissed off would you be if it pulled a stunt like that after three long months of intense gameplay? Is there anyone who could appreciate the bad graphics and glacial pace of Video Chess in 2009? I'm not sure, but it would help to be stranded on a desert island. © Copyright 2009 The Video Game Critic.

I can't decide if passing off 50 variations of Pong as "Olympics" is more misleading or ingenious. Video Olympics was one of the earliest Atari 2600 cartridges, and it looks the part. Despite its action-packed label with a menagerie of athletes, the graphics are limited to moving blocks and beeping sound effects. Hey! Stop rolling your eyes! You'd be surprised how much fun Pong can be, especially when you apply a "whammy" to the ball. There's even a single-player "Robot Pong" variation with a CPU that homes in on the ball like a heat-seeking missile.

The variations become progressively more elaborate, allowing up to four players to participate and control multiple sets of paddles. The term "paddle" is confusing because it refers to both the analog knob controller and the rectangles you move on the screen. The variations are a mixed bag. Handball is confusing because players take turns hitting the ball. Foozpong has so many moving parts it's hard to follow the action. Soccer finds a nice middle ground and hockey isn't bad either.

Video Olympics got creative with its loose interpretations of basketball and volleyball, and the results are somewhat hilarious. After playing all the four-player variations with friends I think we could agree Video Olympics is moderately entertaining. Chris grew weary of the endless Pong action, but Brent was impressed that the cartridge packs such a comprehensive set of Pong games. Not all variations are winners, but when it's at its best, this is multiplayer fun at its purest. © Copyright 2015 The Video Game Critic. 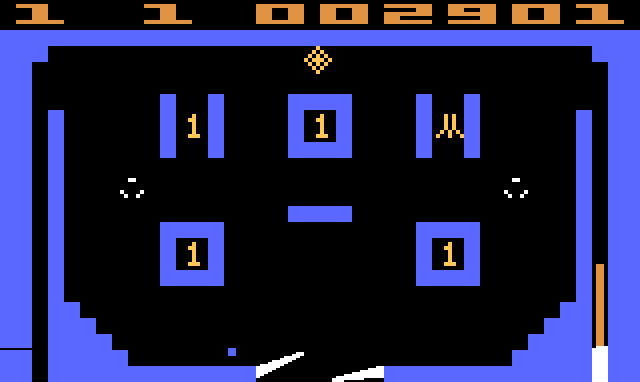 This is a perfect example of a game's sum being greater than its parts. At first glance, Video Pinball looks like a whole lot of nothing. Its blue "table" is sparse and those square bumpers are hard to get excited about. The two white flippers at the bottom of the screen are small and less responsive than I'd prefer. Two white "spinners" on each side tend to slow the ball down more than they speed it up. Still, Video Pinball proves addictive and fun.

The key is its excellent nudge controls which let you influence the ball's movement much more than you can in real pinball. Once you learn how to manipulate the ball without tilting, a lot of strategy unfolds. First, you'll want to focus on hitting the diamonds at the top which increase the bumper multipliers. Next, try to earn an extra ball by hitting the Atari-symbol rollover four times. Once you master the nudge control, you can get the ball to bounce through the rollovers almost indefinitely!

By working the rollover on the right side, you can earn some outrageous bonus points. This is the kind of game that you can play over and over again, and you'll do a little better each time. I remember playing Video Pinball with my childhood friend Billy, and he could keep one ball going forever (much to my chagrin). It bears little resemblance to actual pinball, but Video Pinball's unique style of play makes it an enjoyable experience all of its own. © Copyright 2011 The Video Game Critic.