The more console versions I play of Doom, the more I appreciate this 32X edition. The bad news is, the screen is cropped, and that stone border looks cheesy as hell. I find it appalling that this is not reflected in the screenshots on the back of the box. Shame on you, Sega. The good news is, ten seconds into the game you won't even notice the limited visibility. This is arguably the most playable non-PC version of Doom of the pre-Playstation era.

For the uninitiated, Doom is a hellish corridor shooter with demonic creatures, multi-tiered levels, and satisfying gore. The 32X graphics may lack the sharpness of the Jaguar version, but the silky smooth frame-rate more than compensates. The action moves along at a brisk pace and the controls are spot-on. You do have to use the C button to strafe however, since the Genesis controllers lack shoulder buttons.

Still, I love how you can quickly and easily navigate each stage without even having to use the run button. The monsters are always facing you in this version, but frankly I wouldn't have noticed if no one had told me. The stereo effects are clear and despite what you may have heard, the bass-heavy soundtrack isn't bad at all. Looks aren't everything, and this 32X version of Doom excels in the fun department, and that's the bottom line. © Copyright 2011 The Video Game Critic. 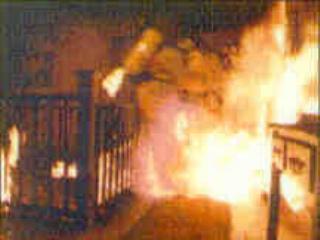 This full-motion video firefighting game puts you in three separate fire scenarios: A burning house, hotel, and university. You get a first person point of view of the action, and the fire and special effects look pretty realistic. But instead of putting out the fire as you might expect, you just move through the buildings locating hazards and rescuing victims before time runs out. The gameplay is confusing and relies almost completely on trial and error.

In one level you'll need to guess between three gas valves, and choosing the wrong one ends the game abruptly. The instruction manual contains maps of the buildings, and that's NOT a good sign for a video game. Navigating the house is bad enough, and most gamers will give up before they master the hotel stage, with its endless hallways that all look the same.

The supporting cast of characters are downright irritating, like your chief who's always yelling at you, or the engineer named "Stinky" who loves to say inappropriate jokes when people's lives are at stake. Fahrenheit comes with both a regular Sega CD disk and a 32X version. The 32X version looks terrific, with vivid colors and full screen video. As for you regular Sega CD people, well, your eyes are in for a world of hurt.

As far as audio goes, this game is surprisingly poor in that regard. The dialogue was poorly recorded and is hard to understand. There's also a theme song that plays during the title screen, and it's almost as embarrassing as the one in Night Trap. Check out these sizzling lyrics: "Feel the heat... of the fire". Fahrenheit is a lousy game, and only players fascinated by firefighting will be the least bit interested in it. © Copyright 2003 The Video Game Critic.

Now this is a good 32X game!! The complete title is "Golf Magazine Presents 36 Great Holes Starring Fred Couples". Geez, is that the longest video game title ever or what? Before I review this game, let me remind you that most Genesis golf games were played on flat courses. But this game actually has hills, valleys, and realistic physics! The holes are actually a collection taken from several courses, so you get a nice variety. There are even one or two "island" par threes!

The game offers 6 play modes including stroke, match, tournament, skins, shoot-out, and scramble. Loads of options include ball trails, replays, the ability to create golfers, and the option to save your stats! The game supports one to EIGHT players! Most importantly, it's fast-paced and easy to play. The digitized golfers are well animated. Control is good - maybe too good. It's tough to screw up unless you take a lot of risks. The courses are fairly wide open.

There are only a few problems. The ball is too small - it appears to be about one pixel big!! The computer always positions your golfer for you. Usually you're aimed at the hole or fairway, but occasionally it's a bit off. You can aim your shot, but the limited graphics (and views) make it difficult to know WHERE it's safe to hit it. This is a quiet game with the exception of some birds and an occasional comment from Fred. Overall, a quality 32X title. © Copyright 2000 The Video Game Critic.

Attractive on the outside but bogged down by counter-intuitive gameplay, Knuckles Chaotix was one of Sega's more spectacular flops. 32X owners anticipating a Sonic-style platform game were bitterly disappointed with this failed experiment. In probably the most ill-advised design decision ever, Chaotix lets you control a pair of characters tethered to each other via a rubber-band-like force. On paper it opens up possibilities for team-oriented play, but in practice, it's a mess.

Imagine Sonic with a ball and chain always pulling him the opposite direction, and you'll get an idea of what playing Knuckles Chaotix is like. The initial alarms are set off in stage one, where you're presented with an arduous, six-part training session that explains the basic moves. It takes a long time to get accustomed to the controls, but even when you do, characters often bounce around beyond your control.

Speaking of characters, there are plenty to choose from, including Charmy Bee, Espio the Chameleon, Mighty the Armadillo, and Vector the Crocodile. Most of these zany creatures are currently residing in the "where are they now file." It doesn't really matter who you select, because any special abilities are negated by the whole tethering aspect. The stages are awash with vibrant pastel colors (okay Sega, the 32X can display a lot of colors - we GET it!), but the layouts are actually quite dull. Most lack a distinctive theme, unless "bright colors and random shapes" counts. Only the Marina Madness stages are the least bit interesting, with their shimmering blue water and enormous white yachts.

The whole "exploration" aspect that made the Sonic games so appealing is completely lost here thanks to the lousy controls and unimaginative stages. The 32X's scaling capabilities are used to some extent, but characters grow pixelated as they increase in size, which doesn't look so hot. You'll notice a few minor 32X effects here and there, but nothing spectacular.

The low-light of the game has got to be the "bonus" rounds where you run through a floating hexagonal-shaped tube while collecting blue balls. The choppy animation and heinous controls are so bad that you'll kill yourself just to end the ordeal. A second type of bonus stage that lets you snag power-ups while floating through space isn't too bad.

Knuckles Chaotix saves your progress automatically, and I like how the stages are selected at random. In addition, the music has that upbeat Sonic flair that Sega fans will find appealing, and quality of the stereo sound is also exceptional. Fascinating to look back on, Knuckles Chaotix may be the best-looking and best-sounding "bad" game I've ever played. © Copyright 2007 The Video Game Critic.

For a game that promised to be so unique and original, Kolibri is awfully tame. It's a hummingbird shooter for Pete's sake! Employing the innocent "Ecco the Dolphin" formula, Kolibri offers beautiful scenery and relaxing music but little else. The colorful layered backdrops resemble oil paintings, and the melodic soundtrack is heavy on the harps and flutes. Kolibri makes good use of the 32X color palette, but otherwise this might as well have been a Genesis title.

In most stages your hummingbird can fly in all directions while eradicating harmful insects or collecting rings. Your objective is never explicitly stated however, so you'll need to figure it out for yourself. Likewise, there are no numbers or indicators of any kind on the screen. Perhaps Sega didn't want to obscure their lovely artwork, but it would be nice to have a score, or at least know how much health you have!

Most enemies are small insects like bees, although you'll also encounter some amazing yellow-striped snakes. That toad might look friendly enough, but if you get too close he'll swallow you in an instant! Over the course of the game your bird will venture through forests, caves, and an ancient temple. If the game's scale is consistent, wouldn't this "ancient temple" be the size of a shoe box?? Sega, you are so busted!

The simple early stages are moderately enjoyable, but later you'll need to perform tedious tasks like moving objects and flying against the wind (joy!). Kolibri is armed with a wide selection of weapons including burning rings, heat-seeking lasers, and pea-shots that explode into fireworks. But while these weapons may look great, they are seriously weak considering every foe can sustain numerous hits. In fact, some creatures appear completely unfazed. Floating bubbles house weapons and health, but their tiny icons are hard to discern.

Each stage is introduced with a password, and the odd stage titles include "Deep Seeding", "Dark Cavity", "Penetration", "Eruption", and last but not least - "New Infection". Yeah, these programmers were some really lonely guys! Kolibri is only mildly fun with one player, and the two-player co-op is completely worthless. My friends hated this game, even calling it a "piece of [expletive]". Maybe so, but there aren't many original games like Kolibri for the 32X, and if you have a soft spot for the Ecco series, your reaction might be a little less visceral. © Copyright 2008 The Video Game Critic.