For classic gamers the word Pitfall is held in high regard, but Pitfall: The Mayan Adventure failed to endear the franchise to a new generation. This time Harry can climb vines, scale waterfalls, and crawl through booby-trapped tombs. The dense jungle scenery is alluring but Harry can't seem to touch a freaking tree without losing his balance and falling flat on his face. He carries a supply of rocks to fling at wild animals but the controls are clumsy. Invisible walls tend to block your progress and monkeys blending into the scenery chip away at your health. The stage designs can be infuriating. The game will lure you to a shiny golden bar only to send you plunging through an unseen hole, dumping you back into an earlier part of the stage. You'd expect the 32X version to be an substantial upgrade over the Genesis, but it's a step down. Despite claims on the packaging, the graphics are not upgraded, and the choppy framerate makes the game hard to watch. You'll languish with unresponsive controls and erratic collision detection. Three new levels bring the total to 13, but few will have the intestinal fortitude to reach them. Pitfall: The Mayan Adventure isn't so much an adventure as it is an ordeal. © Copyright 2018 The Video Game Critic.
Find Pitfall The Mayan Adventure on eBay, Amazon, YouTube, Forums
Copy link to this review
Our high score: 35,828
1 player
If you like this game, try: Pitfall: The Mayan Adventure (Super Nintendo),
Super Pitfall (NES), Pitfall: The Mayan Adventure (Sega CD),
Pitfall: The Mayan Adventure (Genesis), Tarzan (Colecovision)
Primal Rage
Grade: C
Publisher: Sega (1994)
Posted: 2013/8/30

As a child I always had a fascination with dinosaurs, and that was rekindled by Jurassic Park in 1993. Then I could barely contain myself when I discovered a one-on-one arcade fighter with dinosaurs (and apes) rendered with stop-motion animation. Primal Rage is a special effects extravaganza, but its formulaic gameplay fails to live up to its glorious visuals.

This 32X version is a modest improvement over its Genesis cousin, but you really need to place both side-by-side to notice the difference. The option menus are identical and the instruction booklet is practically word-for-word the same. The expanded color palette of the 32X does produce more detailed and lifelike creatures. Their skin and fur has that nice sheen you like to see on a healthy monster. The scenery is slightly enhanced, so in the glacier stage I could clearly see Blizzard the ape's face etched into the side of the mountain. The continue screen features a digitized girl begging you to continue, just like the arcade. The sound effects are clearer than the Genesis, but also louder and occasionally grating. Still, I love those understated "cricket chirps" that play as the last few seconds count down.

The battles are fast and furious, and the button mashing springs into high gear as the action becomes more frantic. For best results, use a six-button controller. As if the moves needed some spicing up, the apes can unleash flatulence and vomit attacks. Not to mention the highly controversial "golden shower" fatality. Stay classy, Primal Rage! So, is this 32X edition worth the upgrade? Only if you're a hardcore Primal Rage fan who wants to experience the game in all of its forms. © Copyright 2013 The Video Game Critic. 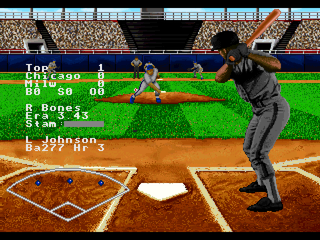 It's easy to get the impression RBI Baseball '95 is undercooked when the title screen can only muster enough voice synthesis to utter "RBI". It may be raw, but RBI Baseball is extremely playable, adopting some of the best features from other 16-bit era baseball titles. You get large, digitized batters like World Series Baseball 95 (Genesis, 1995) along with the robotic Larry King commentator voice of SportsTalk Baseball (Genesis, 1992). The pacing is brisk, with controls so intuitive you won't even need to consult the manual.

The default auto-fielding gives you a head-start on fly balls, but you can turn it off if you prefer more offense. The pitching gives you total control of the ball in flight, and as a batter you can check your swing. The players look fairly realistic in the field despite some jittery animation. Pleasant, understated music plays throughout the action - a relic of a bygone era. The main problem with RBI 95 are the little glitches and oversights, some of which border on comical.

The commentator will exclaim "down the left field line!" as the ball bounces off the right field dugout. The faceless pitchers appear to have sacks over their heads, and some have the complexion of pea soup! Pressing upward during a pitch makes the ball take off like a rocket! The picture-in-picture cut-scenes look bizarre, with actors apparently filmed against a black screen. The AI is erratic, with routine ground balls turning into infield singles when CPU fielders fail to charge the ball.

The games end abruptly without even showing a box score. The graphics are realistic but the colors are oversaturated. There's a slew of modes to choose from including a full season mode, home run derby, gamebreaker challenges, and even a "stadium tour". Perusing the various ballparks sounds like fun until you discover just how blocky and inaccurate they are. RBI Baseball '95 has that rushed, let's-get-this-out-before-the-32X-flops vibe, but if you're looking for some lightweight baseball fun this is surprisingly enjoyable. © Copyright 2018 The Video Game Critic.