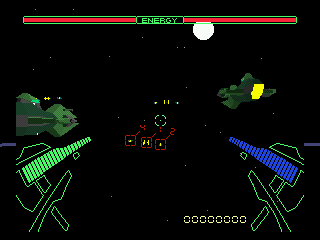 Here's one of the few 32X titles that truly showcases the 3D-rendering capabilities of the system. An impressive first-person space shooter, Shadow Squadron lets you freely maneuver your ship around large areas in space while single-handedly taking out invading armadas. When I first purchased this game in 1994, it was absolutely amazing. Just being able to buzz around massive vessels was a treat, and some are so immense that you can even fly around inside of them!

Your firepower is so potent that a single hit will cause fighter ships to veer off and explode. The larger ships must be destroyed polygon-by-polygon, although it's possible to launch a well-placed "ultra shot" to set off a chain reaction. The satisfying explosions are punctuated with flames and thunderous explosions. You can control one of two ships, and each has its own unique, vertigo-inducing launch sequence. The second ship (Feather 2) offers an "auto-pilot" option which provides an entirely different style of gameplay, as you simply aim crosshairs and shoot while your ship moves in a predetermined path. It's a bit shallow but has a nice arcade flavor.

Shadow Squadron's controls feel smooth and responsive, and red indicators make it easy to locate targets in the distance. Unfortunately, the control scheme is not clearly explained in the manual, and the heads-up displays (unique to each ship) are equally confusing. The battles are a bit slow and not particularly intense, but they're still enjoyable and satisfying to win. An instant replay mode allows you to view a completed mission from various angles. Considering its solid gameplay and cutting-edge graphics, it's surprising that Shadow Squadron always managed to remain under the radar of most gamers. © Copyright 2007 The Video Game Critic. 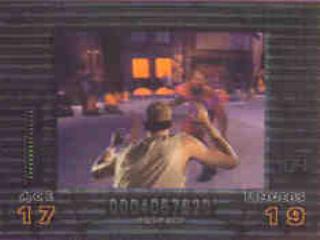 Like most full motion video (FMV) games, Slam City looks terrific but plays poorly. You play Ace, a Woody Harrelson look-alike playing one-on-one against five "street" players, and if you're worthy, you'll face Scottie Pippen himself. Viewing the action from just behind your man, you really feel like you're "in the game". When you start moving around, you feel like you're in control, but you're really not, and that's the first thing you'll need to learn in order to beat the game.

Although you can move side-to-side, your only opportunities to score happen when your opponent lunges a certain way. React properly and a video kicks in of you taking the ball hard to the hoop. If you don't see an opening, you'll want to settle for a jump shot before the 10 second clock runs out. Playing defense is tougher, because steal opportunities are few and far between. The first player to score seven points wins, and you score one point per basket. The CPU is tough and exceedingly cheap.

There's plenty of trash talking throughout the game, but most of it is really dumb. The graphics are terrific, with good definition and no lag time. Watching the same video clips over and over does wear thin after a while though, and although you're supposed to be playing on a city basketball court, it's clearly just an indoor sound stage.

Likewise the "streetwise" players look more like a bunch of perpetrators, and the white actors look terribly out of place. I have to admit that the short haired blonde with the tight white dress is incredibly hot though. The action is spread over four CDs, which seems like a good thing at first, but changing disks is a real pain in the ass. I will admit that Slam City did keep me occupied for a little while, but the game should probably be called Scottie Pippen's Airball. © Copyright 2003 The Video Game Critic.

Sega probably should not have released Space Harrier for the Master System and Genesis. Those graphically-challenged versions don't leave the player with a positive impression of the series. Fortunately this 32X version finally does the game justice. Its rapid-fire gameplay involves moving a guy in a jet pack around the screen while blasting mushrooms, stone faces, flying dragons, and UFOs that quickly scale in from the distance.

The action is chaotic, but the smooth scaling allows you to anticipate incoming missiles and weave around marble pillars. The sense of speed is good, and you can tell the game uses the same underlying engine as Afterburner. The controls are responsive and you can hold in the fire button for constant fire (although tapping lets you unload more shots). When you shoot a UFO it immediately takes a nose-dive straight into the ground, which looks kind of odd. The explosions are completely over-the-top, and I find it amusing how trees and vegetation often go up in mushroom clouds!

Some of the enemies are hard to make out. Are those clouds I'm shooting in the first stage or floating rocks? In one of the later stages there are a lot of big colorful mushrooms that tend to obstruct your vision. Each stage concludes with an obligatory boss, and they turn red to indicate damage just like any good boss should. The familiar soundtrack will please fans of the series and the voice samples are clear. This appears to be a very close port of the arcade game, so Space Harrier fans should be satisfied - at long last. © Copyright 2011 The Video Game Critic.

Web of Fire is the crown jewel of any 32X game collection. Not because it's particularly good, but because the game is Spider-Man, and it's quite rare. Its gameplay is so underwhelming I suspect it could just as easily have been released on the Genesis. The developers tried to use shading to make the characters more detailed, but it's very subtle because the characters are so small and dark.

Spider-Man is nicely animated as he swings through the air, climbs walls, and beats up green dudes in purple pants. I like how he can punch in any direction while sticking to a surface, making short work of any approaching drones. The game is moderately fun but the controls could be better. I found myself "sticking" not only to ceilings and walls, but also dangerous things like giant fans and electrified transformers.

The first stage takes place on New York City rooftops, but while Spidey can swing freely he'll inexplicably die if he swoops too low. The scenery is so repetitive you'll think you're moving in circles. At the end of each stage you'll face an obscure villain like Dragonman, Thermite, or The Eel. Making a special cameo appearance is DareDevil, whom Spiderman can call upon to apply a quick strike. Most stages tend to take place in industrial environments and the layered backdrops look attractive. I especially like that green laser netting stretching across the night sky.

The soundtrack has that distinctive metallic sound but the sound effects could use more punch. The difficulty is reasonable except for the fact that dying sends you all the way back to the beginning of the stage. Web of Fire is an underachiever. Where is my score? Where is the password feature? I expected more, but as one of the few big names in the sparse 32X library, Spider-Man: Web of Fire still manages to be a stand-out title. . © Copyright 2020 The Video Game Critic.

This is an odd little game that even Star Trek fans will struggle to enjoy. In it, you are a student at the Starfleet Academy, where you can learn and participate in several "training missions" to "challenge your tactical skills". Why not just make a REAL Star Trek game? I'm guessing that the developers were planning to do just that, but later downgraded the scope when they realized how weak the 32X's graphic capabilities were.

At heart, this is a glorified Star Raiders clone with better graphics but far worse gameplay. You have access to layers of menus with all sorts of data and instrumentation, but only a geek versed in Star Trek techno-babble could digest any of this garbage. The first person shooting "action" is painfully dull. The enemy ships are fully 3D, but their movements are sluggish and the AI is idiotic.

Being an academic environment, there's also an opportunity to meet and socialize with your fellow space cadets. Here I stumbled upon the single redeeming feature of the game: a pool table! That right, you can challenge classmates to a game of pool, which is by far the highlight of this cartridge. The pool balls are huge but they rotate nicely and the game is easy to play. As you can deduce, Starfleet Academy really isn't much of a game. It's probably the worst 32X title I've come across. . © Copyright 2002 The Video Game Critic. 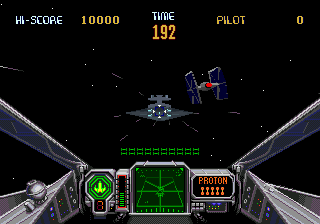 One thing I can say about Star Wars Arcade (not to be confused with the 1983 vector graphics game) is that it really does showcase the 32X's polygonal graphic capabilities. It's a good-looking first-person shooter where you dogfight Tie Fighters in space, infiltrate Star Destroyers, and battle over the Death Star. The game includes a four-mission "arcade" mode and an expanded eight-mission "32X" mode.

Half the stages involve shooting Tie fighters in open space, which is fun because they shatter into pieces (polygons) when blasted. It's also neat how these battles occur in the midst of the huge Star Destroyers. Your X-Wing is well-armed with both lasers and guided proton torpedoes. Unfortunately, the other missions aren't so hot.

It may look great as you approach a Star Destroyer or Death Star, but the gameplay subsequently takes a turn for the worse. The frame rate slows to a crawl and your ship becomes difficult to control as it absorbs hit after hit. Hitting the side of a trench sends you caroming off the walls like a pinball. Looking back, I wonder how I could have possibly completed that Star Destroyer stage.

The background music and sound effects are very good, especially the distinct sounds of zooming Tie fighters. A two-player option lets one player steer while the other shoots, but it's nothing to write home about. Despite its flaws, I enjoy Star Wars Arcade, and would rank it as one of the best titles for the 32X. © Copyright 2005 The Video Game Critic.