If you've never heard of this game, you're not alone. It's a pretty rare 32X first-person tank game (no, there are no "mechs" in this one). A tank combat game for the 32X sounds like a pretty good idea, but this is just a sloppy, unexciting mess. One player can make his way through a series of levels containing numerous tanks (and sometimes a boss), or two players can go head-to-head. You get your choice of tanks, each with its own special attributes including special weapons.

There's not much strategy; just shoot the other tanks and don't stay in one place for too long. The frame rate is smooth enough, but the graphics are ugly. The objects are all sprites, which get very pixelated up close. The small text on your control panel is hard to read. The flat battlegrounds differ in color and scenery, but none are conducive to any kind of strategy.

The music and voice effects are very good, and include a deep voice that lets you know if you're winning or losing. The scoring system is useless; it resets to zero after each round (what's the point??). But the ultimate let-down is the bosses. These menacing-looking monstrosities are well-illustrated in the instruction book, but in the game they are nothing but tanks of a different color. Even the 2 player game is pointless. The 32X could have used a good tank battle game, but this wasn't what I had in mind. © Copyright 2001 The Video Game Critic.

Tempo is like Mario Bros on acid. The seven levels include a psychedelic "hi-fi" stage and an unusual "indigestion" stage, along with the more traditional downtown, winter, and jungle stages. Each level is bursting with color. The scenery is multi-layered, and everything is alive and moving. Sega was definitely trying to show off the 32X graphic capabilities here.

As far as the audio goes, the game tries to have a hip "rap" theme, but the opening song is pretty cheesy. The in-game music is funky, and some of it is quite good. Your big-eyed character must fly, jump, shoot, and kick his way through each level. While the game is certainly an eyeful, you'll soon discover that this is just a by-the-numbers platform game.

And although the graphics are wild, they are often so cluttered that you can't tell where you can go, or what you can touch (without dying). Portals that transport you around only add to the confusion. The control could be better also. The same button is used to jump and fly, and you'll often fly when you just want to jump. Also, Tempo moves a little slow for my taste. There is a nice stage select screen, and there are even some mini games available. But overall Tempo just isn't much fun. © Copyright 2001 The Video Game Critic.

The 32X version of this boxing game plays better, but lacks some of the charm of the Genesis version. Toughman plays similar to Nintendo's Punch Out games, with your boxer being a green outline. The action is fast and furious, and there are plenty of punches and special moves. The backgrounds look more realistic than the Genesis version, but are less animated and not as interesting (or funny). Only one babe introduces the rounds, no matter where you fight, unlike the Genesis version, which has a different girl for each location. The responsive control is the star of this game, but it will make your fingers very tired. © Copyright 2000 The Video Game Critic.
Find Toughman Contest on eBay, Amazon, YouTube
Copy link to this review
1 to 2 players.
If you like this game, try: Toughman Contest (Genesis),
Evander Holyfield's Real Deal Boxing (Genesis), Super Punch Out!! (Super Nintendo),
BC Racers (Sega 32X), Punch-Out!! (NES)
Virtua Fighter
Grade: A
Publisher: Sega (1995)
Posted: 2022/3/28
Rating: Teen

It's a shame Virtua Fighter wasn't among the initial crop of 32X titles, because it could have generated a lot more interest in the system. Instead it turned out to be the 32X swan song, released when the system had one foot in the grave and the other on a banana peel.

This 32X version compares favorably to the Sega Saturn Virtua Fighter (Saturn, 1995). All eight martial artists are included. The character models may be blocky but the motion-captured animation and dynamic camera angles are easy on the eyes. The silky-smooth takedowns are particularly satisfying. I noticed fighters change facial expressions and their voices are clear too.

A responsive three-button scheme lets you guard, dash, throw, and even stomp. The manual lists 25 moves for each character, most of which are easy to learn. You can feel the devastating impact of each hit. Attacks deal significant damage, keeping the matches short and sweet. Ring-out possibilities add excitement when you're teetering on the edge.

The stages are sparse. The beach scene has a nice tranquil vibe but the city-at-night looks like a mess of yellow dots. When you knock an opponent off a building, he really should fall more than two feet. You can experiment with camera angles while the match is paused but I wouldn't recommend it.

This 32X edition might be considered Virtua Fighter 1.5, as it incorporates the new "ranking" mode from Virtua Fighter 2 (Saturn, 1995). This pits you against a series of CPU competitors, allowing you to gain levels of experience. It doesn't record your progress but does provide for a more satisfying single-player experience.

The fact that this cartridge has no load times catches me off-guard as I'm accustomed to reaching for my beer - um mean vitamin water - between matches. Easy to play and fun, there's something pure about this version of Virtua Fighter. It's also a shining example of what the Sega 32X was capable of. © Copyright 2022 The Video Game Critic. 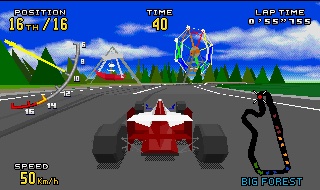 Star Wars Arcade (Sega, 1994), Doom (Sega, 1994), and Virtua Racing Deluxe comprised the holy trilogy of 32X games. This one however takes the cake with its amazing 3D graphics offering multiple camera angles you can toggle on the fly. Not to mention it is simply a pleasure to play.

You have the option to race Formula One, stock, or prototype cars. Automatic transmission is available but you'll want to select manual for any chance of catching your 14 CPU opponents. It's not too hard, as the game will automatically downshift for you. You can view the action from behind your car or climb right into the driver's seat. There's even a vertigo-inducing birdseye view that's like playing with a Matchbox car!

What makes Deluxe so engaging is its silky-smooth frame-rate and responsive steering. Spinouts occur if you try to take a corner too fast, but letting off of the accelerator helps. The digital steering works remarkably well, allowing you to make fine adjustments with ease.

I love the energetic synth music that introduces that game and kicks in at various intervals. It's got that feel-good Sonic the Hedgehog vibe! The sound effects are less enticing. Those whining engines sound like a swarm of angry bees, and why does my car keep backfiring?

The post-race replays are surprisingly fun to watch, thanks to quick-cuts of exciting camera views. The game tracks statistics like best laps, but doesn't save them, which is too bad.

This game has aged extremely well, offering smoother visuals and more options than the $100 Virtua Racing (Genesis, 1994). It even has a two-player split screen mode, although the graphic quality is substantially degraded. There aren't many great games for the 32X, but Virtua Racing Deluxe is pretty fantastic. © Copyright 2023 The Video Game Critic.