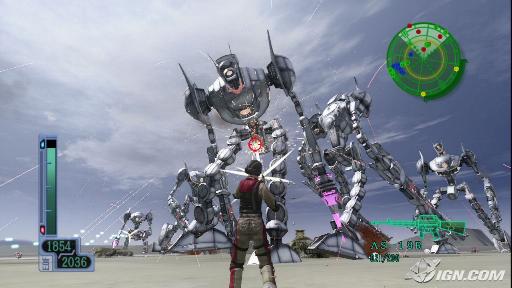 Earth Defense Force 2017 (EDF) is the 3D equivalent of those Dreamcast-era 2D shooters - the ones with frantic rapid-fire action and projectiles that flood the screen. The familiar premise has an armada of alien ships invading Earth, deploying towering robots and giant rampaging insects. Played from a third-person view, you are an infantryman fighting alongside dozens of other soldiers.

The controls are refreshingly simple, mainly limited to the shoulder buttons, and even reloading is automatic! Selecting weapons between stages is key, and there's plenty of big guns to choose from. Typically you'll want one assault weapon for close-range combat, and some kind of rocket launcher for the big jobs. Green blood splashes all over as you employ the standard "strafe and shoot" tactics on the swarms of marauding ants and spiders. The alien bugs look remarkably lifelike, and the cool, retro-futuristic robots lumber around with an alarming sense of mass.

The endless blasting is fun, but it's the quality of the visual effects that really caught me off guard. The buildings are the largest I've seen in any game, and when they collapse, it's astonishing. Equally impressive are the enormous alien ships that settle over the landscape and dispatch aliens into the city. What makes the graphics so effective is the fact that you can see very far into the distance, giving the carnage an impressive sense of scale.

While running amidst the chaos, you'll want to keep an eye out for pixelated icons to regenerate shields, regain health, and acquire new weapons. There are even opportunities to man vehicles like tanks and helicopters, although the controls for these are less than intuitive. I love the unapologetic B-movie quality EDF exudes, with cheesy radio announcements and gung-ho soldiers that call to mind Starship Troopers (not that I would ever condone that awful film).

You can select your difficulty for each stage and even cooperate with a partner on a split screen. My friends absolutely love this game, and often find themselves shouting "holy [expletive]!" in response to the relentless destruction. Only the occasional glitch will remind you that EDF is a budget title. In one instance, a bug was hiding under an overpass, but you could see parts of its body jutting through the road above. Another time my soldier appeared to inexplicably take flight, when in fact he was swimming (with the camera situated underneath). It may be a little rough around the edges, but Earth Defense Force is still exceptional. Incorporating simple controls, substantial firepower, and amazing eye candy, this is a break-through shooter for the 360. © Copyright 2007 The Video Game Critic. 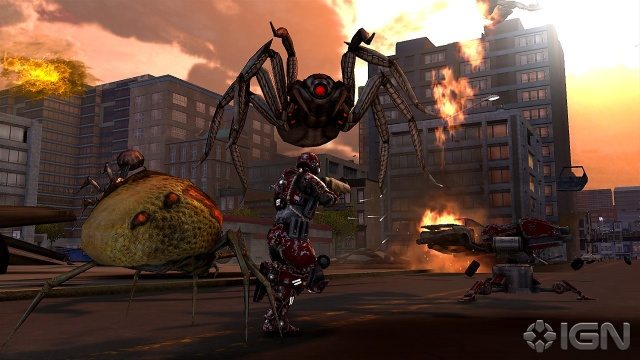 Earth Defense Force is the kind of game you want to like, but it makes it so hard. The original EDF was a refreshingly straightforward third-person shooter with an unapologetic B-movie theme. It was great how you could team up with a friend to defend earth via split-screen. At first glance this sequel looks like the same game! Much of the action is set in the war-ravaged "New Detroit" where giant ants emerge from holes, alien ships terrorize from above, and hulking robots tower over you.

You can toggle between two weapons (like a machine gun and a rocket launcher), and there's a nifty quick-reload mechanism borrowed from Gears of War. I love how the ships in the sky rotate into position before unleashing their deadly lasers, and I was surprised when I realized I could take them out with normal bullets! It's fun to see them come crashing down all around you, and excellent surround sound envelops you in the carnage.

The giant humanoid robots look scary in a 1950's comic book kind of way, and their synthesized roars will strike fear into your heart. Taking down these behemoths is satisfying thanks to the awesome manner in which they collapse and explode. Despite the extensive mayhem, Insect Armageddon lacks the sense of awe of the original game. Blasting ants and spiders is fun for a while, but there are too many, so it becomes tiresome. Some enemies are just plain irritating, like those giant "ticks" that latch onto your back.

The jet packs are fun to use, but the plodding mechs are boring. A female radio voice keeps you posted on your current objective and a map in the corner indicates your next destination. You'd think that would be enough to keep you informed, but the game is confusing! The symbols on the map are tiny and hard to discern. At one point you're told to move out of the "blast radius" but you have no clue where that is. Often you'll find yourself shooting at regenerating monsters for extended periods of time, wondering if there's something else you're supposed to be doing.

The game has an auto-save between chapters, but there's no save indicator and the stage selection screen is confusing. But Armageddon's biggest sin is its lack of restraint. There are simply too many enemies and the battles drag on for so long you just become weary and want it to end. It'll take 15 minutes to take down a mothership, and then you enter the next area and there are three more! The visuals have a hard time keeping up with the chaos, leading to some unsightly glitches and slow-down. Insect Armageddon is fun in concept, but "more of everything" isn't necessarily a recipe for success. © Copyright 2011 The Video Game Critic. 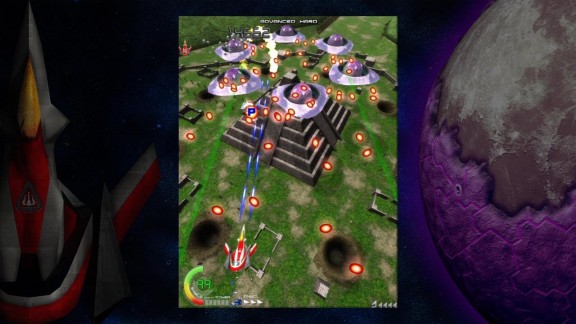 Region-free shooters from Japan fill a narrow niche, but when enjoyed properly they can deliver simple, unadulterated joy. Eschatos has old-school written all over it. Its gameplay is mainly the old-school 2D vertical format, but the viewing angle occasionally swings in a vertigo-inducing manner. Enemies assume odd geometric shapes (including tripods and pinecones), and flying saucers are everywhere.

The pacing is brisk. Scenery whizzes past you almost too fast to comprehend, and enemies and missiles converge on you quickly. You have two rapid-fire weapons: one that shoots straight and one that fires diagonally (both sides). A shield is initiated using the right trigger. Eschatos will keep you on your toes but doesn't feel nearly as overwhelming as similar games. Certain enemies absorb a frustrating number of shots, but touching floating smart bomb canisters help clear the screen. You get one continue, which is fair.

The graphics are unspectacular but clean, and the upbeat soundtrack sounds like something from a Sonic the Hedgehog game. Earning a high score is what it's all about, and thankfully Eschatos offers a local high score screen for you to enter your initials.

Multiple versions of the game are included (original, advanced, and score attack) along with two old-school bonus games. Judgement Silversword (2001) is clearly the spiritual predecessor of Eschantos, featuring similar gameplay with what appear to be 8-bit graphics. Cardinal Sins (2004) is an odd variation that features one stage per "sin" (greed, envy, wrath, etc). The difficulty is high, but the bonus ships keep coming, and it's possible to "save" a kidnapped ship (ala Galaga). Eschatos feels like it's from another era, and I guess that's what I like about it. © Copyright 2013 The Video Game Critic. 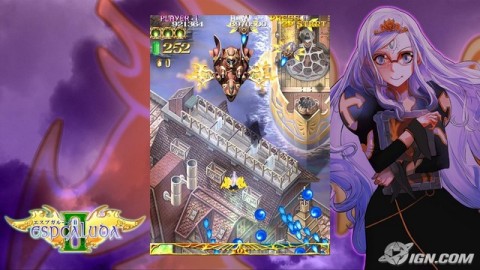 If you have a thing for these crazy Japanese shooters, this one really hits the sweet spot between projectile insanity and shooting oblivion. Like many of its ilk, you control a spritely chick that fires magic beams and missiles to destroy enemies in air, land, and sea. Espagaluda (roughly translates to "chicken butt") has a few elements that put it a notch above your garden-variety Japanese vertical shooter.

The artistry and detail of the stages is absolutely spectacular. You'll fly over quaint townships with clock towers, scenic gardens, and cobblestone roads. The game has a retro-futuristic style with steel structures and detailed ornamentation (think Naboo from Star Wars). Even the tanks look gorgeous with their shiny gold plating. It's hard to take in the scenery however when the action only consumes one-third of your screen.

The gameplay itself is deep, as evident by the 18 lessons in the tutorial mode (all in Japanese). Of course, trying to figure out "the angles" for yourself is half the fun. Espgaluda II is a bit more forgiving than similar games, partly due to a handy shield that consumes incoming missiles before releasing a massive blast. When you destroy an enemy its missiles are neutralized, and in advanced stages they actually turn in bonus points. It's pretty exhilarating when you're about to be overrun by a torrent of missiles, only to have the screen suddenly awash in bonus points. If you find yourself in a situation with no escape, hang back and hope for the best.

One thing that's kind of cheap is how you get a "maximum firepower" icon when you use a continue. This disc comes with five versions of the game: arcade, 360, arrange, novice, and black label. Each will save your high scores locally, which is pretty sweet. Japanese shooters tend to be an acquired taste, but if you're into this kind of thing, Espgaluda II is a nice addition to the collection. Note: This is a region-free disc. © Copyright 2013 The Video Game Critic. 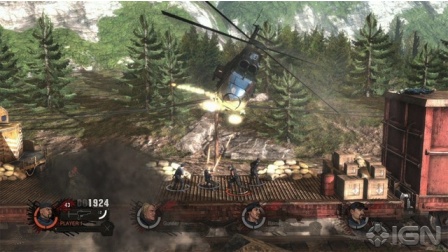 With old-school stylings and a kick-ass license, Expendables 2 should have been a slam-dunk. At the very least I was expecting some mindless shooting action. Well, I got the mindless part right. The game incorporates actors from the film (Sylvester Stallone, Dolph Lundgren, Jet Li, Terry Crews) who look and sound just like their characters - only a lot smaller! Up to four players can team up, and if you can't round up three buddies the CPU will assume the remaining characters.

The overhead view offers a decent perspective of realistic combat zones packed with enemy soldiers to mow down and vehicles to blow up. Your character has a circular life bar that slowly reconstitutes, and your comrades can revive you. It sounds like straightforward fun but the gameplay absolutely sucks. It's painfully repetitive as generic goons continuously pour out of buildings like clowns from a clown car. Your guns are terribly inaccurate and not particularly harmful. It's hard to shoot a guy standing directly in front of you! The weapons are so ineffective I started running around punching people instead!

You can toss grenades but whenever I tried it would land about two feet in front of me. There are plenty of weapons lying around but you can't tell if they are better or worse than what you already have! The four-player action is unbridled chaos, and the sputtering framerate doesn't help matters. I can't even tell you if this game has friendly fire or not.

The stages have a lot of invisible walls. The helicopter shooting stage is a nice change of pace, but watching vehicles blow up after getting hit with a single bullet gets old after a while. The game lets you upgrade skills and weapons, but only before you begin playing, and it doesn't tell you the price of anything until after you try to buy it. Expendables 2 is the type of crap that makes you realize how low the standards for downloadable games really are. © Copyright 2015 The Video Game Critic.