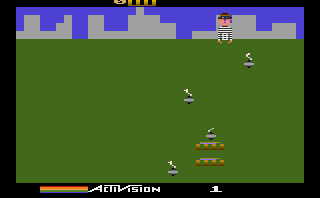 Like most ports of their other Atari 2600 titles, Activision didn't bother sprucing up Kaboom! for the 5200. They just slapped some blocky buildings in the background, and as you catch bombs, the game plays notes from Tchaikovsky's 1812 Overture (otherwise known as the theme to the Bad News Bears). The only other addition is a "pitch and catch" mode, which allows a second player to be the mad bomber - not a big deal. The 5200 joystick has analog capabilities, so the control is respectable -- but there's really no substitute for a good paddle controller. I'm a pro on the 2600 version, but I couldn't get very far on this one, and didn't find it nearly as fun. © Copyright 2001 The Video Game Critic.
Find Kaboom! on eBay, Amazon, YouTube
Copy link to this review
Our high score: 837
1 or 2 players
If you like this game, try: Kaboom! (Atari XEGS),
Kaboom! (Atari 2600), Vaboom (Vectrex),
Keystone Kapers (Atari 5200), Pitfall (Atari 5200)
Kangaroo
Grade: C+
Publisher: Atari (1983)
Reviewed: 2014/8/25 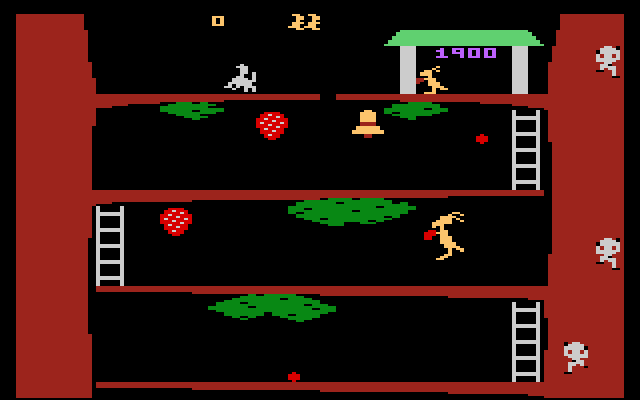 It's clearly inspired by Donkey Kong yet Kangaroo has a certain charm of its own. You are a mother Kangaroo attempting to save her kid at the top of the screen. The platforms are formed by tree branches, and these trees happen to be inhabited by apple-hurling monkeys. But get this: you can punch the monkeys in the face! Yes, your kangaroo is armed with a boxing glove and I love how it gets extra large when you unleash your fury. It reminds me of Battletoads (NES, 1991).

Climbing the trees isn't easy due to apple crossfire and the fact that falling any distance will kill you. You collect fruit along the way for points and ringing a bell causes more valuable fruit to appear. The arcade-style graphics look sharp but the audio is lousy. The nursery rhyme-style music will make you cringe and the high-pitched sound effects are just grating. And since this is on the Atari 5200 it almost goes without saying that the control sucks. You push up on the stick to jump, and since it doesn't auto-center you end up hopping several extra times.

Leaping between platforms requires a precision these controllers lack. The spaces between branches are small but your timing needs to be exact or you'll plunge to your death. Your toe literally needs to be just over the edge before you initiate that jump! My first instinct was to dial down the difficulty, but there are only two skill levels: novice and advanced! I guess it's that challenge that keeps me coming back for more. Kangaroo follows a familiar formula but has enough twists to keep things interesting. © Copyright 2014 The Video Game Critic. 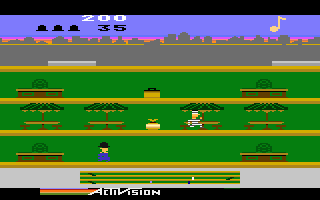 While I love the Atari 2600 version of Keystone Kapers, I wasn't impressed with this adaptation. The graphics are nearly identical to the 2600, except for some additional background department store items which have no bearing on the gameplay. I was expecting Activision to at least add a few new obstacles, but no, this is the same game. Happy music plays incessantly, but fortunately it can be turned off. The control is fine until you try to take the elevator. It was difficult enough to line up your man in the 2600 version, and it's nearly impossible here! One nice feature is the ability to select your starting level. © Copyright 2001 The Video Game Critic.
Find Keystone Kapers on eBay, Amazon, YouTube
Copy link to this review
Our high score: 26000
1 player
If you like this game, try: Keystone Kapers (Atari 2600),
Keystone Kapers (Colecovision), Pitfall (Atari 5200),
Kaboom! (Atari 5200), Joust (Atari 7800)
Koffi: Yellow Kopter
Grade: C
Publisher: R.W. Lloyd (2002)
Reviewed: 2004/8/17

This 5200 homebrew cartridge is highly original. You control a yellow fire-fighting helicopter named Koffi, and your main adversary is a storm cloud by the name of "Pyro". Pyro likes to set forest fires with his lightning bolts, but can be defeated simply by bumping into him a number of times. Be warned; you'll need to time your attacks carefully to avoid his bolts. Koffi must also collect raindrops to fill up his water tank, allowing him to douse the flames below. Rescuing animals in the forest earns you bonus points.

Koffi's graphics are colorful and appealing. Lightning bolts shoot from the side of Pyro to form actual words like "BURN!" - a nice touch. The three forest screens are colorful and attractive, and I especially like the one with the evergreen trees and snow. There are ten different animals you can save, and each is nicely rendered in multiple colors. I found it amusing how this group includes a blue whale and calamari. The fourth screen is a "boss" confrontation with Pyro's mother -- a cloud stretched across the top of the screen with two huge eyes.

The game has a few technical issues. First, you must fly at just the right height above the fire in order to release your water, and it took me a while to figure this out. Also, the clumsy 5200 controller will cause Koffi to "slide" into the fire if you're not careful. Rescuing the animals is fun - too bad it's not more integral to the game. Finally, the whole "bumping into clouds" business does get repetitive after a while. Koffi is an acquired taste, but it's fun once you get the hang of it. Five skill levels are provided, so there's ample challenge. Koffi Yellow Copter is a fresh addition to the 5200 library that should appeal to arcade fans of all ages. © Copyright 2004 The Video Game Critic. 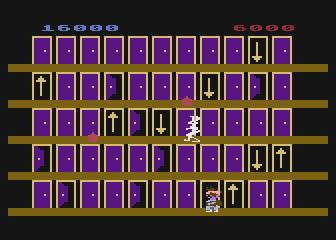 Having reviewed just about every official release for the system I now find myself descending into the deepest, dark bowels of the Atari 5200 library. Yes, I'm referring to the world of unreleased prototypes - conveniently found on my handy multicart. Looney Tunes Hotel stands out in this wretched hive of scum and villainy, mainly on the strength of its big-name license.

The title screen boasts a large Bug Bunny face overlooking a parade of characters. Actually these "characters" are weird monochromatic shapes that require quite a bit of effort to discern. It's a good thing subtitle names are used to identify Bugs Bunny, Elmer Fudd, Yosemite Sam, and the Tasmanian Devil. Taz looks like a giant purple frog for Pete's sake!

Start up a new game and you're presented with a grid of generic doors, prompting some serious eye-rolling on my part. Some doors contain up or down arrows, transporting you between floors. Playing the role of Bugs Bunny you'll try to avoid the roving Elmer Fudd and a bomb-rolling Yosemite Sam.

Doors left ajar allow you to take cover from enemies and bombs. When a bomb comes to a stop you can pick it up and place it in the doorway, ala Spy Vs Spy (Atari XE, 1984). If you think it all sounds perfectly awful, you'd be right! The game is no fun at all and the point system makes no sense. Confusing, awkward, and just plain ugly, Atari did us all a favor by pulling the plug on this mess. © Copyright 2016 The Video Game Critic.