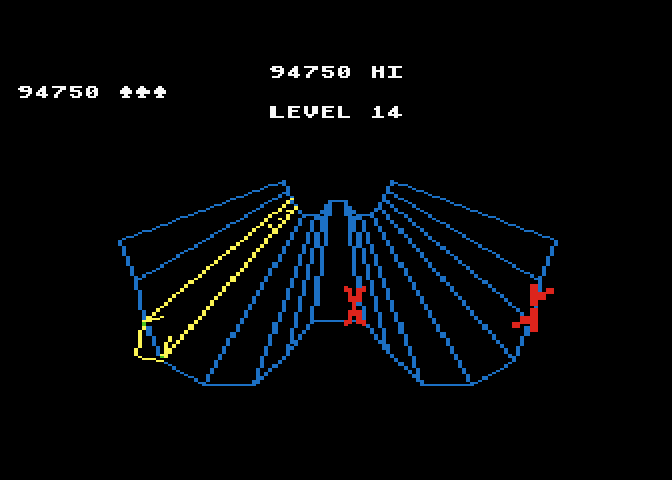 The lack of a home version of the original Tempest always bothered me. This innovative arcade hit used vector graphics to convey 3D and employed an analog knob controller. You move a "blaster" along the perimeter of a geometric shape, unleashing a stream of missiles at oncoming flippers, tankers, and fuseballs that scale in from the center. This 5200 version was originally slated for release in 1983 before being cancelled. Thank goodness some kind-hearted souls took it upon themselves to resurrect (and finish) this lost treasure.

I have to confess that my first impression was not good. I expected the Atari 5200 controller to be a natural fit considering it "twirls" so easily (centering is the problem). Unfortunately you have to move the stick side-to-side. Not only is this imprecise, but your blaster tends to move on its own. I didn't fall in love with this game until I used the trak-ball. The difference is night and day! You can effortlessly roll your blaster around the perimeter and stop on a dime!

The high-resolution, raster graphics do a remarkable job of emulating the razor-sharp lines of the arcade. Your square-shaped missiles look cool, and I love how you can flood several lanes by rapidly moving back and forth. Tempest is tough but it helps that you have a "super zapper" (smart bomb) that recharges between rounds.

One minor complaint is that it's hard to make out the green spikes that appear in the lower part of each lane. They can kill you as you're whisked from one stage to the next. All the stages are included and you can choose your starting level. Tempest is a fantastic addition to any Atari 5200 collection, especially with its glossy packaging and colorful manual. Just remember to knock down the grade by one letter if you do not own a trak-ball. © Copyright 2013 The Video Game Critic. 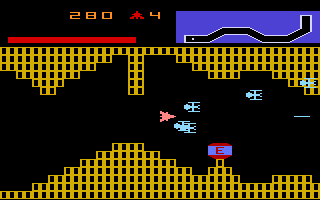 This multi-directional-scrolling shooter lets you shoot in four directions simultaneously, as you travel through a variety of "zones". I'm happy to say that Vanguard looks just like the arcade version. Unfortunately the gameplay begs for a real joystick, and the 5200 joystick just isn't up to the task. It feels extremely unresponsive, and it's difficult to get off a shot quickly in any particular direction. Fortunately, there's an option that will keep you shooting forward continuously (which helps a little bit).

Another annoyance is the horrific carnival music that plays during the rainbow zone stages. Was that in the arcade version? It's appalling! Since when is carnival music cool? On a positive note, there are four selectable tunnels to keep the challenge high. But despite its good looks, poor control prevents Vanguard from being great. © Copyright 2000 The Video Game Critic. 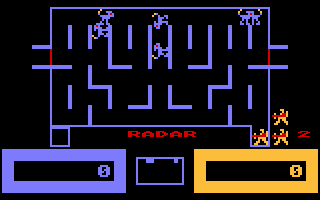 This two-player maze shooter is entertaining enough, but what' the deal with these chunky graphics! This looks like the Atari 2600 version minus the flicker! C'mon, I know CBS could have done something with these goofy-looking monsters! At least the sound effects are up to par, with foreboding background music which increases in tempo as the action intensifies.

Despite its mediocre graphics Wizard of Wor is always a good time to play. The monsters move unpredictably, and it's fun to hide around corners and wait as they approach. The radar display at the bottom of the screen is critical to tracking invisible enemies. Once you clear a wave, you face the flying "Warluck" which frantically flutters around the screen until you kill it.

Next, the wizard himself appears, teleporting from one area of the maze to the next. To be honest, shooting the wizard involves just as much luck as it does skill. Wizard of Wor's best feature is its two-player simultaneous action. It's great to team up, but keep in mind that you can shoot the other guy! Wizard of Wor may not be much to look it, but its intriguing gameplay can be habit-forming. © Copyright 2004 The Video Game Critic. 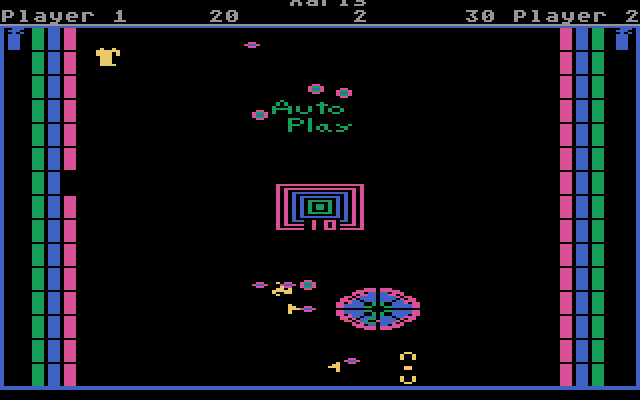 I have a problem with games that you can play for a long time and score a ton of points while having absolutely no idea what the heck is going on. I assume Xari Arena was conceived as a head-to-head version of Super Breakout (Atari, 1982). Players move a paddle around each side of the screen, guarding their respective walls from objects flying all over the place. There's a bunch of concentric squares in the center which I still don't know the purpose of.

The text instructions aren't much help because it's not clear what objects they're referring to. After a while I figured out the basic idea. You need to grab incoming fireballs and then pass over the floating cells to destroy them. Touching a cell without a fireball temporarily puts your paddle into a weird funk. It sounds simple but there's so many moving parts it's hard to follow what's going on. The fact that the fireballs rotate and scale only adds to the chaos.

I can see why this prototype never was released. Can you imagine this being pitched to an Atari executive? I can see his eyes glazing over. The game also features lengthy "dancing dot" intermissions that are a complete waste of time. I was hoping Xari Arena would grow on me but the more I played it the more I just wanted it to stop. I haven't tried the two-player mode but to tell you the truth I can't imagine trying to explain this game to a friend. Xari Arena is one over-engineered mess. It's a mishmash of random ideas that add up to one big "huh?" © Copyright 2020 The Video Game Critic. 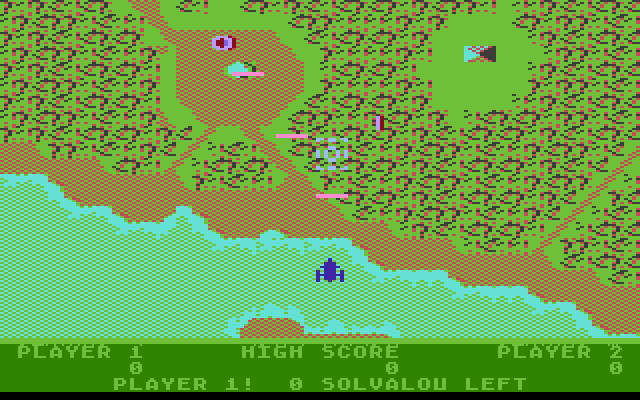 I stumbled across this Xevious prototype on my Atari 5200 multicart. I don't know if it was expressly designed for the Atari 5200 or ported from an Atari 8-bit version, but either way it's pretty good! For those not familiar, Xevious was a vertical shooter that let you simultaneously shoot enemies out of the air while dropping bombs on ground targets. I believe it was also one of the first games to feature end-of-stage bosses.

This unreleased version retains the basic elements of the arcade and the audio is particularly faithful with its trademark "clinking" sounds and booming explosions. So I fired up this puppy and wouldn't you know, my ship begins drifting up and to the left. Damn non-centering Atari 5200 joysticks! Once you take control however it's really not an issue. The missiles you fire in this game look peculiar because they're so wide. They look more like waves. I'm cool with that because I love the coverage they provide.

I also appreciate how you can hold the button in to initiate constant fire. When it comes to bombs you can only drop one at a time so you need to make it count. You'll aim them with a reticle that floats in front of your ship. Ground targets tend to be small so you need to be precise. I like how the bombs leave burning craters in their wake. In the air you're accosted by floating rings, but instead of the spinning silver rings of the arcade these look more like little pink donuts. The rotating "mirrors" are smaller but still look great. Enemies tend to fire rapidly and the crossfire in this game is treacherous.

Scenery includes green foliage, rivers, and platforms for enemy armaments. One is sticking out of the water like an oil rig. Enemies on the ground look small and indistinct, so I was somewhat shocked to see a fully-realized boss! Xevious is the real deal. If this is just a prototype then I would have loved to have played the finished version. © Copyright 2020 The Video Game Critic. 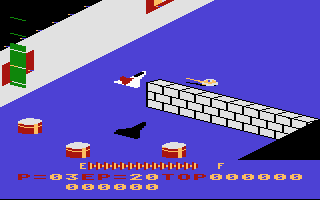 This classic isometric shooter rocks on the 5200. The scenery is impressive as you fly through well-fortified space fortresses; blasting cannons, dodging missiles, scaling walls, and navigating electronic force fields. Judging the heights of the walls is tricky at first but once you get the hang of it, it's not very difficult. Zaxxon was one of the first games to feature an end-of-stage "boss". Compared to modern bosses however, this small, boxy robot looks kind of wimpy.

The sprites in this game are slightly more pixelated than the Colecovision version, but the animation and scrolling are far smoother. As usual, the 5200 controller is an issue, but this time it's not the joystick at fault - in fact, the directional control is terrific. It's the mushy side buttons, which you need to press constantly to maintain your firepower. Your thumb will be exhausted after two or three plays. Still, when taken in small doses, this is a very entertaining version of the groundbreaking shooter. © Copyright 2005 The Video Game Critic. 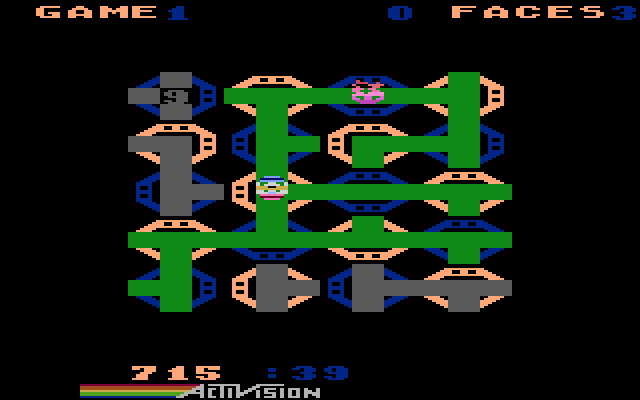 You know you're in for some kind of abstract puzzle shenanigans when you see a nonsense name like Zenji. As with most brain-teasers, I'm not a fan. If I wanted to think I'd read a book or something. I had envisioned Zenji to be some kind of obscure card game, but in fact it's one of those "solve the circuit" puzzles that currently serve as mini-games in just about every modern adventure from Resident Evil (PS1, 1996) to Marvel's Spider-Man (PS4, 2019).

The screen is a grid of pipes and your goal is to connect them all so they'll turn green. You move a "rolling head" along the pipes, rotating each individually by holding in a button and moving the joystick. The controls aren't bad but I found the gameplay tedious. I actually progressed pretty far by tinkering around but I was losing interest in a hurry.

As if the timer didn't make the game hard enough, there are flames wandering around. You can't defend yourself but you can rotate a pipe to alter their path. But get this - in advanced stages those flames actually shoot at you! Give me a break! Now I realize there are people who enjoy racking their brains over something like this, and those weirdos should bump up the grade by a letter. Zenji has that Activision polish with clean graphics and even a nifty how-to-play screen. It's just not my idea of a good time. © Copyright 2020 The Video Game Critic. 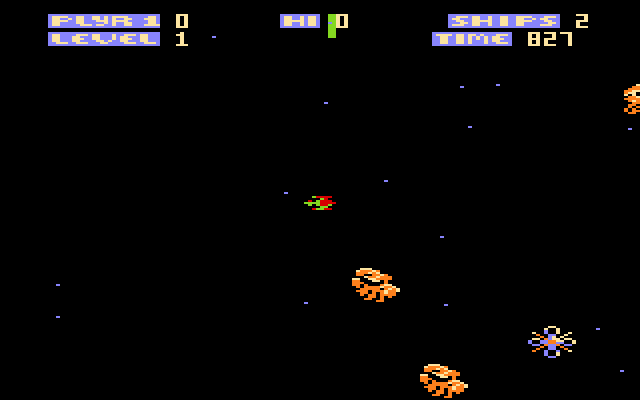 This rapid-fire space shooter is surprisingly fun and addictive. Your mission is to destroy 16 satellites, but you'll encounter asteroids, robots, and other adversaries as well. The screen scrolls in all directions, letting you fly around freely. It's easy to locate the satellites because they send light beams between each other. Still, it would have been nice to have an on-screen counter indicating how many remain.

While the basic gameplay is simple, Zone Ranger has a lot of extra elements to spice things up. "Sonic sparklers" make you temporarily invincible, and portals allow you to bypass levels. There are even cool maze stages. The graphics are great - all objects are multi-colored and well defined. I even like the control scheme - holding down a button to rapid fire is quite satisfying. Zone Ranger is an exciting shooter. Check it out. © Copyright 2001 The Video Game Critic.