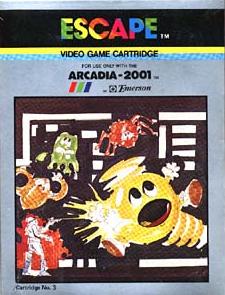 This curious title is practically identical to Robot Killer, except enemies assume random "mutant" shapes instead of robots. And oh yeah - that bouncing ball has been replaced by a spinning bow tie. Any classic gamer will immediately identify both as Berzerk rip-offs.

I suspect Escape was meant to replace Robot Killer (Arcadia, 1982), perhaps in an effort to avoid a lawsuit (Escape's product number is higher). This game does make a good first impression with its well-defined mazes peppered with a diverse assortment of enemies. But once the sluggish action kicks in, it feels like your man is wading through molasses. The monsters have all day to elude your slow-ass missiles, but they just stand around like a bunch of wallflowers.

Pretty soon both your wrist and attention span will languish as you easily escape one uneventful screen after the next. That spinning bow tie is pretty quick, but since it lashes out in random directions, it's rarely a threat. Escape's pathetic gameplay is only matched by its atrocious box art. At first glance I thought a little kid had attempted to "color in" the poorly drawn characters, but apparently that's just the design. Berzerk fans might want to give Escape a try, but no one will ever make the mistake of playing this game twice. © Copyright 2008 The Video Game Critic. 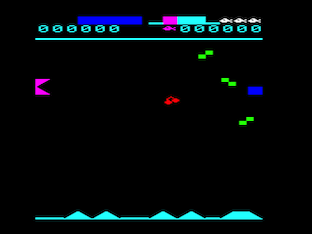 The title screen to Funky Fish states "licensed by Tahkan Ltd". Are you telling me companies were fighting over this license in 1983? Wow. Funky Fish tries to combine elements of Defender and Pac-Man, carefully sidestepping the fun parts. You're an angular fish swimming across a side-scrolling screen. Occasionally you'll encounter a large geometric shape (like a bow tie) spewing smaller shapes. Making contact with these turns your fish into a skeleton, so give them some room.

By firing pellets from its mouth your fish can transform these mini bow ties into delicious cherries. I don't remember that in Oceanography class! It's fun to gulp the cherries down as they swirl around in the current. When the large shape is depleted it turns into an empty square, and you can swim over it to "soak up" bonus points.

Advanced stages introduce additional obstacles like a shrimp moving up the screen, but it's easy to keep your distance from these slow-moving crustaceans. While competently programmed, Funky Fish comes off as bland and unexciting. You'll find yourself losing lives not due to hazards, but due to carelessness brought on by boredom. © Copyright 2021 The Video Game Critic. 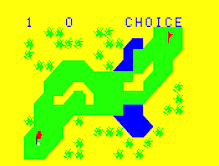 After reviewing a few dreadful Arcadia 2001 titles I'm happy to report that Golf does not completely suck. Its intuitive gameplay is similar to Golf (Atari 2600, 1977) except more sophisticated because you get to pick your club before each stroke. The holes are fairly elaborate with branching fairways, ponds, and trees. Apparently those angular yellow areas in the center are sand traps.

You select your club via the keypad, and I noticed the game is smart about the selection (no driver available in a sand trap for example). To aim you press the joystick up or down as your brown golfer rotates around the ball. The thing is, there are only about 12 angles so you sometimes just need to make due. You press the button to swing, holding it longer for a harder hit. The ball doesn't travel nearly as far as you might expect, so never attempt to cross water. Your hits don't get much height either, so avoid the trees too. I do like how the ball scales on occasion, momentarily becoming larger when high in the air.

The game switches to a putting view when you reach the hole, but your putts are either too short or roll over the cup. You'd think the game would cut me some slack; I'm playing Golf on the Arcadia 2001 for Pete's sake! Have a heart! Should you make par you'll hear a clapping sound effect that could honestly be mistaken for gunfire. I like how you can play a 9-hole round in about 15 minutes. It leaves you with the impression you might want to play this again sometime. © Copyright 2018 The Video Game Critic.

Video games allow us to be superheroes, sport stars, space marines, and medieval warriors, but precious few let you play the role of a homeless slob. Why? Perhaps because it's such a bad idea. Hobo is a marginal game that bastardizes elements of Frogger (Atari 2600, 1982) and Lode Runner (Atari XE, 1983). It would be a blatant rip-off if two of its three screens weren't oriented diagonally. That's right, on a system with some of the most unresponsive joysticks ever made, you're asked to execute precision diagonal movements.

In the first screen you try to cross a street with cars moving in opposite directions. Trying to navigate your hobo is so aggravating; it feels like you're wrestling with the controller! The second screen is even more painful as you climb ladders while avoiding police on patrol. As if the awful controls aren't bad enough, your margin of error is razor thin. When caught by police your hobo is escorted to a big cinder block with "JAIL" written across the top. Apparently being dirt-poor is a crime!

The final stage looks pretty good with criss-crossing trains, but why are they surrounded by letter Z's? Are passengers sleeping inside? Your hobo is tiny on this screen, and since the trains move horizontally it's not hard to hop between them. Then it's back to the first screen, but now the cars move so fast only pure luck will guide you across. I like the graphics and variety of Hobo, but the controls really bummed me out. © Copyright 2014 The Video Game Critic. 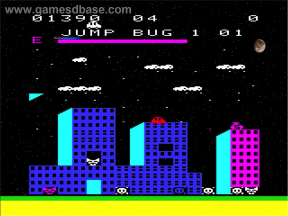 I call this "the little platformer that could" because I wasn't expecting much from Jump Bug but I got a lot! The game puts you in control of a perpetually bouncing car. Yes - apparently this "bug" is a Volkswagen. For each screen you begin on the left, trying to hop over to the right side while snagging bags of cash for points. The only thing standing in your way are stationary skulls and evil faces peppering the landscape.

You can control how high you jump and you can even fire shots to clear out the faces. I guess in theory you could hang back and pick off all the faces, but that's time-consuming and an energy meter is ticking away at the top of the screen. There's no requirement to clear the screen of money - you can just skip across a few bags of cash and exit stage right. Jump Bug offers some attractive 3D background scenery that incorporate skyscrapers, pyramids, and erupting volcanoes. Touching clouds propel you upward but the lava from volcanoes is fatal to touch.

While great fun at first, Jump Bug loses some luster during advanced stages. The graphics become more elaborate but it's hard to tell what's in the foreground or background. The collision detection could be better and some faces tend to blend into the scenery. It may not be the most polished game for the system, but Jump Bug is an unexpected good time. © Copyright 2016 The Video Game Critic.

When I told my friend Scott we were about to play this, he immediately launched into an elaborate Morris Day song and dance routine ("ow-wee-oh-wee-oh! Think I wanna know ya"). I felt bad about breaking it to him that the name was Jungler - not Jungle Love! Many readers have recommended Jungler to me, especially since I've been routinely bad-mouthing Arcadia games and claiming that most are excruciatingly slow. I was led to believe this was the Holy Grail of the Arcadia library - a lost gem that would elevate my opinion of the system from bad to marginal.

The box looked promising enough with its intertwined dragons and the magic words "licensed arcade game"! Wow, this must be as good as Pac-Man and Donkey Kong! Jungler does look arcade-ish when you fire it up, with its crisp, elaborate maze and long "dragons" slithering through it. Actually, those things look more like bees followed by a trail of circles, but hey, we can pretend, right?

Setting up the game took me a while. The default variation is painfully easy, and with 64 variations to sift through, it's hard to find the one that hits that "sweet spot" combination of speed and difficulty. When you begin a game you're greeted with a very unpleasant, off-key string of disjointed musical notes. That's got to best the worst song I've ever heard!

Jungler's gameplay involves guiding a dragon around a maze while shooting at the tails of two other dragons. After shooting off their tails, you can hit them head-on for points. The controls are not terribly exact (Scott kindly referred to them as "inelegant"), but the collision detection just plain stinks. Half the time your shots don't even register! Granted, some variations move remarkably fast, but those border on unplayable. Truth be told, Jungler is not that fun, and far less entertaining than watching Scott get funky. © Copyright 2009 The Video Game Critic.