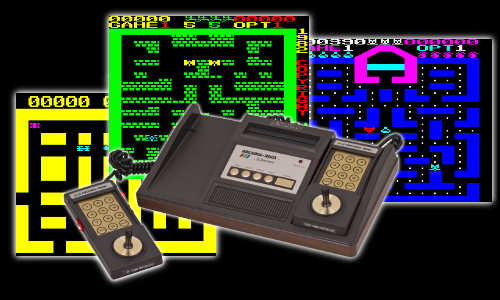 Here's a prime example of a company hopping onto the video game bandwagon in the early 80's hoping to cash in on the craze. The Arcadia 2001 was capable of displaying sharp, colorful graphics, but its games were second-rate rip-offs of arcade hits like Pac-Man, Missile Command, and Space Invaders. Most were buggy and poorly programmed, with some bordering on unplayable. Despite its reasonable pricetag the system was pronounced dead on arrival, and is little more than a footnote in video game history.

Although the Arcadia's tepid game library didn't deliver much, its poorly-written manuals certainly packs entertainment value. Clearly the people (person?) writing these instructions lacked a firm grasp of the English language. As if the rampant typos weren't funny enough, every aspect of the game is described in such verbose detail it's unintentionally hilarious. For example, there's usually an entire page dedicated to the "pause" feature (which Emerson apparently reinvented as "freeze"). Check out the following excerpt which I copied directly from a manual (including capitalizations and typos):

VI. TO FREEZE THE GAME

It's interesting to note that Emerson threatened to sue a company named Arcadia which had created a tape-loading peripheral for the Atari 2600. That company was forced to change its name to Starpath. Considering how most Arcadia 2001 games were shameless rip-offs, I find this astounding. 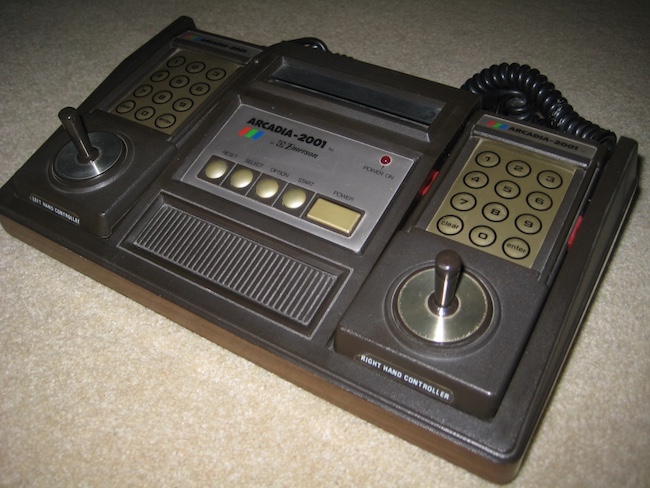 Console design: C+. This is a surprisingly compact little system, resembling a miniature Intellivision. The center of the unit features a cartridge slot, power light, and five buttons: reset, select, option, start, and power. On side of the unit has a controller slot for easy storage. Like the original Intellivision, the controllers are hard-wired, and their short, telephone-style cords don't allow you to sit very far from the system.

Console durability: B. I don't have much data to even speculate about this, but the system is solid-state and feels sturdy.

Graphics: C+. Judging by the screen shots alone, you might think the Arcadia is relatively powerful in terms of graphics. The objects are relatively high in resolution, and the visuals feature crisp, vibrant colors. You'll rarely find an object rendered in more than a single color however, and when multiple sprites begin moving around the screen, the system's limitations become evident.

Audio: F. Either little effort was put forth to create audio for its games, or the system just wasn't very strong in this regard. The sound effects in most games are limited to basic buzzes and beeps. There were very few attempts made to create music on the system, and these tunes sound off-key and generally pathetic. 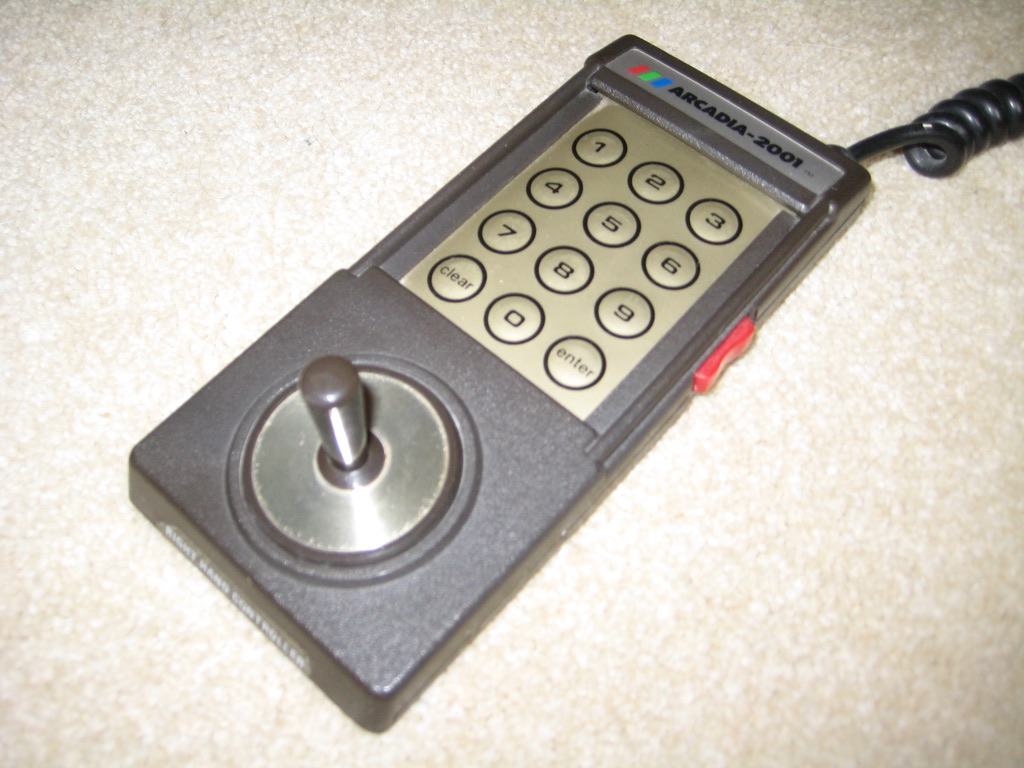 Controllers: D. The Arcadia's controllers are similar to those of the Intellivision, boasting a twelve-button numeric keypad which accommodates overlays. There's a directional disk on the bottom, but thankfully it has a joystick coming out of it. It feels stiff but relatively comfortable to use - for short periods of time at least. There's a red button on each side of the controller, and these mold to your thumbs unlike their Intellivision cousins. 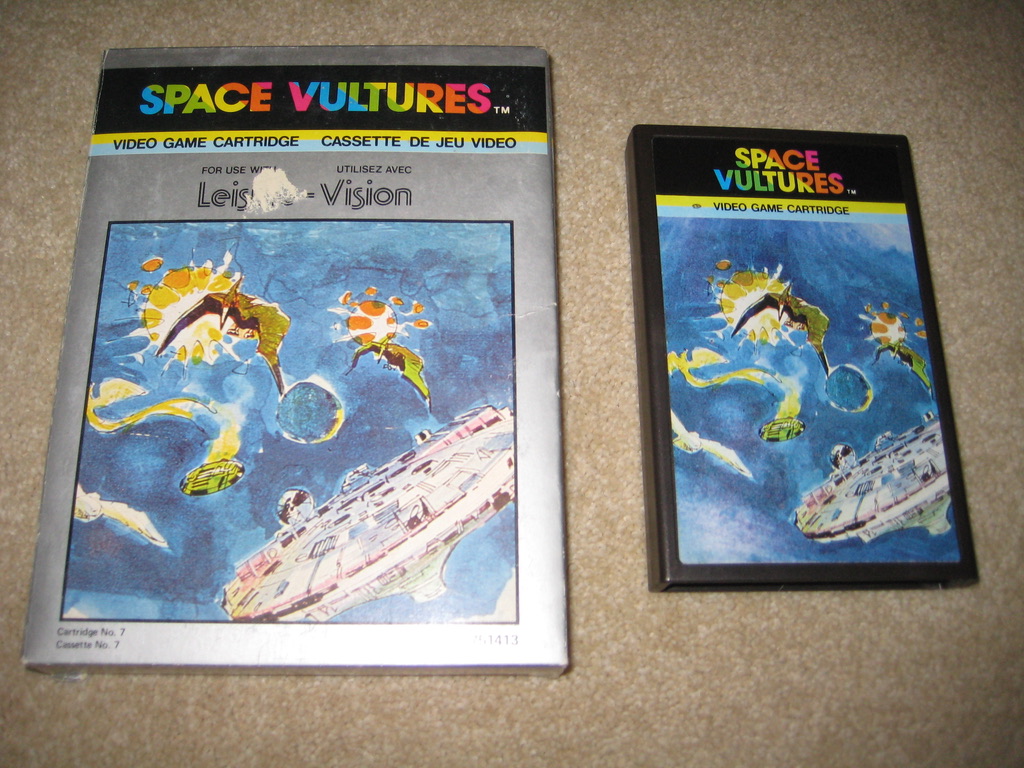 Media: D-. Arcadia's blocky cartridges came in two sizes. The small ones are slightly larger than an Atari 2600 cartridge, and the larger ones are nearly twice as long. The reason for the size difference is not clear. There's plenty of room for artwork on the front of these cartridges, but the space is wasted on poorly-drawn illustrations. The rainbow-colored font looks tacky. On the back of each cartridges is a blue label listing features of the cartridge and/or instructions.

Packaging: D. Arcadia cartridges were packaged in large silver boxes which opened like books to reveal the cartridge in a blue plastic insert. A manual and overlays could be found tucked into a pocket behind the cover. The front of these boxes boasts some of the most amateurish artwork ever seen, rivaling what you'd find in a kid's coloring book. The name of the game is printed on the side of the box in a rainbow font along with the "cart #", indicating where it falls in the series. The unnecessary overlays tend to be plain and white, with no artwork.

Pack-In Game/Launch Titles: I couldn't really find any information on these. If you know any, please pass along.

Library: F. With very few exceptions (Cat Trax comes to mind) Arcadia games tend to be of low quality. They tend to run slowly and are prone to glitches and bugs. A few titles (like Space Vultures) could even be considered broken out of the box! Even the more respectable titles move at a plodding pace. The graphics may look sharp at first blush, but rampant slow-down and choppy animation keep the excitement to a minimum.

Collectability: F. As if the lack of decent games isn't bad enough, Arcadia systems and cartridges tend to be expensive and hard to find. That's mainly because the system was never produced in large quantities. The Arcadia 2001 is more of a curiosity for collectors than a system you'll want to play on a regular basis.