This is one of the better and more original titles for the Arcadia 2001. In fact, I really can't really think of any other game that's quite like this. Tanks A Lot places you in a maze against a brigade of tanks. Your slow-moving soldier is armed with a missile launcher that unleashes large blue balls. Your goal is to protect your "commanding base vehicle" at the bottom of the screen, which actually looks like a little red truck.

Several enemy tanks appear near the top of the screen per wave, but only two are active at a time. The stationary yellow tanks may look like sitting ducks, but they'll sometimes surprise you and suddenly spring into action. When dealing with tanks in motion, be sure to stay out of their line of sight. Anticipate their movement into an intersection, and fire just before they arrive. When two missiles collide, they cancel out. The maze is composed of bricks, and it's cool how you can blast holes in the walls.

Adding more strategy is your ability to open and close gates, and even "warp" to another part of the maze. Tanks A Lot offers an interesting combination of traditional elements, but the action is so sluggish that you almost feel as if you're playing in slow motion. Your death animation is so drawn-out that it's almost comical. Tanks A Lot could definitely use a little zip, but this game is not half bad. © Copyright 2008 The Video Game Critic. 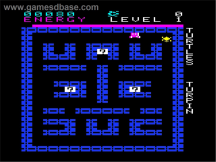 Turtles Turpin is proof that even third-rate maze games can be fun. The intro screen depicts a turtle slowly approaching a building with an SOS signal emanating from the roof. Those high-pitched beeps might be more tolerable if it didn't take the turtle forever to reach the front door (which looks like a brick wall for some odd reason). Once inside, each "floor" is a maze with eight boxes labeled with question marks. You must touch all the boxes while avoiding several trucks in hot pursuit. Hold on a second - why are trucks driving around the inside of a building?! Whatever.

You can immobilize the vehicles by dropping bombs which the trucks have a tendency to run right smack into. Most boxes reveal a "turtlette" which hops on your back, but sometimes the box will unleash another truck. When that happens you'll want to turn tail and drop a bomb immediately to avoid instant death. You really need to stay alert! After all the boxes are revealed an exit appears on the top right.

If you survive you'll watch a dull intermission showing the turtle taking an elevator to the next floor. The sound effects are an abrasive cacophony of screeches - I had to hit mute just to write this review. While annoying at times, Turtles Turpin is a pretty solid arcade game. The controls are good, the action is relatively fast, and there's even a bit of strategy to it. It's one of the more playable titles in the Arcadia library. © Copyright 2014 The Video Game Critic.