I received this cart from none other than the Video Game Critic himself while attending a convention in Philly with him about 15 years ago. He purchased it for me as an incentive to get back in touch with my Commodore roots. A decade and a half later I finally got around to playing it. The verdict? It may be another decade and a half before I play it again. Actually that's a bit harsh; the game is mildly amusing for short-burst gaming.

Playing as a clown on a unicycle, you move right and left to catch balloons on your head. The balloons come in different colors that fall at various speeds - the yellow are nice and slow, the red a little faster, the blue faster still, and the green fastest of all. After you clear the first screen subsequent levels incorporate pac-men and ghosts (yes - you read that right). A pac-man will eat any balloons or ghosts on your head, but he'll stick around until you're stuck with four pac-men on your head until the end of the level. If you can't catch a falling balloon you can try to kick it back up in the air. This can be done as many times as you wish, but meanwhile subsequent balloons will continue to drop and you can find yourself in trouble.

The graphics incorporate a static cityscape as background and the balloons above in a Space Invaders-type formation. The sound effects are okay but the background music is disturbing, prompting most players to hit the MUTE button about 30 seconds in. This monotonous tune manages to be both boring and hauntingly evil at the same time. Sadly, Kickman has little replay value. It gets a little more hectic after the first screen, but then settles into the same thing over and over. I achieved a high score of 81,150 and feel no desire to go back and top it. © Copyright 2015 The Video Game Critic. 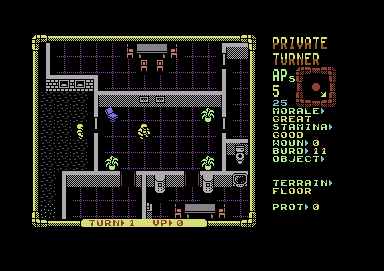 Anyone familiar with "the gamer in me" knows I consider X-COM: UFO Defense one of the best video games of all time. Over the course of my multi-year man-crush on its developer Julian Gollop I discovered he had in fact developed several precursors to X-COM for the C64! Laser Squad is considered one of the better ones. After spending about three years waiting for it to appear on Ebay, I finally secured a complete, boxed copy with one of the smallest manuals I've ever seen! About the size of a postage stamp, you'll need some sort of magnification to read it.

I played through several scenarios in Laser Squad with mixed results. As much as I love tactical turn-based strategy I couldn't get into this as much as I had hoped. I'm sure many people have fond memories of playing against friends and family but I only played against the CPU. Your objective is to outfit and control a small squad of men against a force of combat droids. Varying scenarios let you rescue POWs or escape hordes of robots but it all comes down to keeping your men alive while eliminating enemy droids.

Action points (APs) determine how many moves each soldier gets during their turn. Equipping weapons, changing direction, and movement all consume various amounts of APs. The interface is a little busy and non-intuitive so it took a couple of games before I got the hang of it. I can't tell you how many times I wasted APs by rotating my character to the left when I meant to rotate right. Another point of contention was figuring out how to open a door.

You'd think it would be pretty straightforward or at least covered in the manual, but you'd be wrong on both counts. Believe it or not, you have to un-equip anything you're holding (which consumes AP of course) before you can open an unlocked door! How ridiculous is that? The scenarios themselves are interesting in that the environments are somewhat destructible. I've seen windows shot out, trees and bushes destroyed, and doors blown off their hinges. Items that litter the playfield can be destroyed or used for cover.

If you detect droids one room over and don't want to risk walking through the door, just blow a hole in the wall! Destroyed droids or fallen comrades can be scavenged for extra ammo or weapons. During the CPU's turn the screen blanks out for any movement your men wouldn't be able to see - a nice touch that adds to the tense atmosphere. Laser Squad clearly has a place in the lineage of the X-COM series, but it would have been a lot more playable with a better interface and a decent manual. © Copyright 2017 The Video Game Critic.

I snagged a copy of Munchy off Ebay after one of the Critic's readers suggested it for review and I realized it wasn't in my collection. Having never heard of it back in the day, I'm not sure this game was ever officially released by a real publisher, and I was unable to find much information about it online.

Munchy is, for all intents and purposes, Pac-Man. I mean, just look at the picture for cryin' out loud! I have to believe that if any legally-recognized company put this product out on the market they'd have been sued by any combination of Atari/Midway/Namco.

You run around a maze eating dots, avoiding ghosts, and occasionally gobbling up fruit for bonus points. If you eat a large dot, the ghosts become vulnerable for a short time and you can snack on them for extra points. As far as I could tell the course layout is identical to the original Pac-Man and even the ghosts are the same colors. I think the biggest difference is that Munchy has the status information (score, # of lives, current bonus fruit) displayed on the right-hand side of the screen, making the actual playfield slightly more "up and down" than the official Atarisoft version.

The sound effects are slightly different, with a continual "woooo woooo woooo woooo" which will make you think your little brother is behind you trying to imitate the sound of a fire truck as best a 7-year old can. Yes, it's THAT annoying. I do like the display slightly better on Munchy than I do Pac-Man, so it's a complete toss-up as to which one is better if you're a Pac-Fan. © Copyright 2011 The Video Game Critic.

I recently had a chance to play the original Pitstop with the Critic on his Atari XEGS, and Pitstop 2 isn't much different. You have the option of racing 3, 6, or 9 laps around any one of six tracks (or all six if you select Grand Prix). The graphics are much improved over the original. That isn't to say they're spectacular by any stretch, but compared to the original it's like night and day. As you race around the track you need to avoid other vehicles and keep an eye on your fuel gauge and tires. If you're running low on fuel or your tires are worn (as indicated by different color bands that appear on them) you'll need to make a pitstop.

What could have been an interesting "mini-game" is a bit of a mess in this iteration, as it's more difficult to change tires than I remember in the original. Trying to maneuver your tire-changer around the front and back of the vehicle and then line him up just right is a maddening exercise in frustration. Apparently the developer realized this and put some dotted "guiding lines" on the ground but you still have to fuss around to get him to the sweet spot.

Considering how speed is the #1 criteria for pit stops in real racing, it's amazing how slow and clumsy your crew is. Refueling is much easier; the gas man only goes left or right, so you move him towards the car until he starts pumping and push him away when you've got enough. Do not let him overfill your tank, as that will lead to your fuel dropping back to nothing and you'll have to refill it all over again.

You can usually get away without even hitting the pits if you're only racing three laps, but otherwise you're sure to run out of fuel or blow a tire before you complete the race. One odd thing about this game is that it always presents the action in a split-screen format, even when playing the computer! When playing against another player I find myself glancing down occasionally to see what he's up to, but I really don't care when it's the computer player.

It's a shame they don't have the option for playing full-screen, but what can you do? The audio is limited to your racing engine and some minimal sound effects when you do hit the pits. Pitstop 2 isn't bad for an early 8-bit racing title. The two-player split-screen was pretty unique for the time, but the lack of a save feature for best lap or race times hurts its replay value. © Copyright 2011 The Video Game Critic. 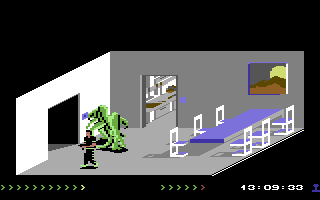 Check it out - a game set in the future that actually takes place in the future! In 2061 genetic experiments are in progress aboard an orbiting space station to develop a stronger, heartier race of mining creatures. What could possibly go wrong?

Project Firestart casts you in the role of an intrepid "fixer" sent to retrieve the station's log files, initiate self-destruct, and get the heck out of Dodge before two hours elapses. Otherwise *they* well remotely destruct the ship, taking you with it. Which begs the question, why are they sending you in the first place? They must really want those logs!

Once you arrive they fax you a map. Who could have guessed such a problematic, hated technology would make a comeback in 2061? I'm surprised they didn't issue me a beeper for good measure! I had read Project Firestart is considered one of the first (if not the first) "survival horror" titles and I believe it. Despite minimal sound and sparse inventory there's a pervading sense of dread and foreboding as you search the deserted vessel while keeping an eye on that ever-ticking countdown.

On occasion you're subjected to a jump-scare in the form of a sudden loud noise accompanied by a quick cut-scene of a mutant. When played in a dark room in total silence it is a jarring experience! Despite being armed with an energy weapon there isn't much combat. Finding your way around is the primary challenge and it can feel tedious at times. The game seems designed for confusion. You press "up" to enter a room but to exit you have to push left? And while I'm no cartographer I am a guy and could not make heads or tails out of the so-called map. I did find a decent fan-made map on the internet so apparently I wasn't the only one with issues.

Apparently there are several endings to the game although to date I've only been able to achieve one of them. Sadly, it's the one where you die! There's no "Try again?" option. No, you have to power-cycle the C64 and completely reload the game. Talk about punishment! Project Firestart is a difficult and often disorienting experience. Still, when played alone at night it does a surprisingly good job of raising goose bumps and building tension as you feverishly try to complete a harrowing mission in the lonely desolation of space. © Copyright 2018 The Video Game Critic.