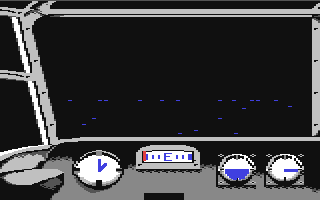 I try to adhere to the Critic's mantra of staying seasonal and with Veterans Day looming I was thrilled to find a still-in-shrinkwrap, unopened copy of The Dam Busters on my shelf. This game takes place during World War II - the last "good" war! But while Accolade published some fine games for the C64, I quickly learned this is not one of them.

The Dam Busters puts you in the role of pilot, navigator, gunner, and bombardier of a British Lancaster bomber on a mission to destroy a German dam. Along the way you'll encounter barrage balloons, anti-aircraft flak, enemy fighters, and spotlights. If it sounds like a thrilling incursion, dial your expectations back now!

First of all, missions occur in the dark of night, so while you can look outside from a variety of angles, it's always blackness staring back. I spent over an hour just trying to get through the "tutorial" which lets you practice bombing runs with no resistance. You're given a quick lesson on how to set your throttle, boosters, altimeter, and airspeed to the ideal settings.

The instructions tell you to "move your throttle down slightly until your RPM gauges read two o'clock", but your gauges immediately begin to drift. Is that good? Bad? Does it even matter? The instructions also reference where the "red needle" airspeed indicator should be in relation to the "blue needle". The problem is, both freakin' needles are blue! It's as if the person writing the documentation was given design notes that didn't match the final product!

Needless to say, at no point did I ever remotely come close to bombing a damn thing ...which ironically is what I was trying to do in the first place. Nine times out of ten I just plowed into the ground, with the reason provided "failed to put out engine fires"? Eventually I quit the damn/dam tutorial and jumped straight into the second scenario.

The ability to ward off enemy fighters, shoot down barrage balloons, and destroy searchlights elevates this game from pure "F" territory into "D" range, but only because it was vaguely playable - although not particularly fun. I tend to gravitate toward flight simulators and war games, but The Dam Busters is one that completely misses the mark. © Copyright 2018 The Video Game Critic.

Never have I wanted to like a game prior to playing it quite as much as The Last Ninja. Apparently a huge hit with our Commodore brethren across the pond, the game was released late in the C64's life cycle yet still managed to spawn two sequels. I'd heard plenty of buzz and seen lots of screenshots. The game features an isometric game field (a la Zaxxon), beautiful graphics, wonderfully immersive music, and of course - Ninjas! Can't miss, right? Wrong!

I spent about an hour trying to get into this game and all I got for my trouble was frustration and bloody knuckles. The Last Ninja employs a unique control scheme, whereby your character will move in one direction while continuing to face another. In order to face the way you're actually moving, you need to rotate the joystick around to that direction. Sound confusing? It is.

I can't tell you how many times I was getting a sword to the face (or a foot to the junk) as I flailed at thin air because I couldn't face my assailant in the heat of battle. As you walk from screen to screen looking for items and exploring, you'll face enemies one at a time, pray at statues, and navigate obstacles. At a water crossing it took me about ten tries before I could successfully make the three jumps from rock to rock to the other side.

The isometric view makes judging your spacing and lining up angles extremely difficult. If it weren't for a website that shows you the exact jumps, I may never have made it. Picking up objects, necessary to advance the game, proved equally difficult. It probably took me five minutes to figure out how to pick up my first object (a sword on a rock).

I could occasionally pick up a key, but at no point was I able to successfully pick up something from the belt of a dead man (nun-chucks?). Apparently you have to be standing at just the right pixel to execute the "crouch and grab" technique, and it drove me mad. I've read there's a dragon you have to either kill or run past at the end of the first level, but I couldn't bear the control scheme long enough to find out for myself.

The only things saving this game from an "F" are the impressive graphics and the excellent music. Had they simply made your ninja face the direction you moved, this game could have been a real winner. I'm sure I'll eventually muster the patience to give The Last Ninja another go, but unless I have some incredible epiphany I'm afraid I'll never understand why this game was so popular. © Copyright 2012 The Video Game Critic. 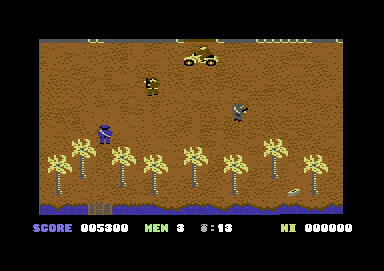 Continuing my binge of Veterans Day shooters, I decided to go with the Commando-inspired import Who Dares Wins II. After all, it wouldn't be right to ignore our SAS brothers overseas. So why start with the second in the series? Because I don't own the original - that's why. From what I've seen online however, there isn't much of a difference. There's no doubt Who Dare Wins II is a Commando (Data East, 1985) rip-off, as both play nearly identically.

You're a soldier armed with a rifle who must travel up the screen avoiding enemy combatants while trying to rescue fellow soldiers and capture outposts. There are eight levels to clear and if you finish them all you start back over at level one. Yes, being a foot soldier is a thankless job! "In gratitude of your unflinching and dedicated service, you're now going back to the front to do it all again soldier!"

I must confess I prefer this to the arcade port of Commando. Who Dares Wins has a slower and calmer pace, so you can be thoughtful and strategic instead of straight run-and-gun. Additionally, they managed to implement a functional method of grenade throwing. You simply hold the fire button a second longer than you normally would. While this sometimes causes you to throw a grenade inadvertently, it's far better than having to hit the spacebar like Commando.

Several levels begin with a man tied to a pole about to be executed, and you can save him if you can shoot his executor in time. That's pretty cool. The game also put a lot of thought into the vehicles, incorporating ground-strafing fighters, trains, boats, bombers, and robotic tank things. Who Dares Win II is a fairly easy game as C64 shooters are concerned but I appreciated its deliberate pace and so did my thumb. © Copyright 2016 The Video Game Critic.

Continuing my trend of reviewing games just past the point of anyone caring (baseball after baseball season, football after football season, the WNBA at any point in time), I figured a solid week after the Sochi Olympics would be the best time to review Winter Games (No IOC trademark here! Any resemblance to actual Olympic events is purely coincidental.) Building on the success of Summer Games, Epyx takes the action to the colder climates and challenges the player to achieve the best score in any of seven winter-themed events.

You enter your name, choose a country to represent, watch the opening ceremony, and then it's off to the slopes. The graphics do a great job of conveying the feeling of playing winter sports and playing in my basement on a real life "snow day". I swear I felt a few degrees colder from looking at the screen than I did before I booted the game up. You begin with a trick-ski event called Hot Dog, where the object is to leave a downhill ramp, do as many varied tricks as possible, and then stick your landing.

Like most events, the timing of your joystick movements is crucial and landing correctly is an absolute bear! This event is followed by the biathlon (much better) and the incredibly weak and ponderous figure skating (just like the real Olympics!) Then there's the ski jump, speed skating, free skating, and finally bobsled.

You can compete in any single event, practice one event, or play through all seven in order. As I mentioned previously, the timing of your joystick is crucial to doing halfway decent in all of the events. Then again, if you're playing by yourself you're bound to get at least six gold medals no matter how poorly you perform, as there are no computer-controlled opponents. You can still shoot for "world records" though, and best scores get saved to disk for future generations to admire and worship you over.

Despite playing this during "the winter that doesn't want to end" and fresh off the actual Olympics, I had a hard time getting into Winter Games. The controls were just awkward and the weakest/lamest event (figure skating) effectively makes up two of the seven events. Why not include hockey or curling? I'd go back to see if I can get my name saved to disk for at least one event (preferably the biathlon), but there isn't much draw beyond that. Like most sports games of its time, Winter Games is much better if you have a human competitor, which would probably bump the score up to a B-. © Copyright 2014 The Video Game Critic.