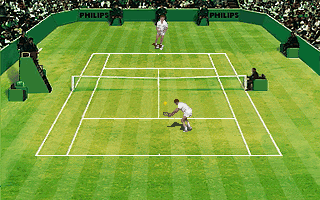 The CD-i isn't exactly known for its sports games but International Tennis Open is an eye-opener. Its photorealistic graphics and digitized audio far exceed anything else in the 16-bit era when it was released. Each court (grass, clay, hard) looks real and the tilted overhead viewing angle is just right. The digitized players are well animated and the ball bounces correctly. Crowd noise and ball sounds are digitized, and commentators even chime in on occasion.

There's a bit of "dead time" between points but you can hit a button to expedite the process. I didn't recognize any of the players in this game (Victor Player? Robert Garett?) so I assume they're fictional. One issue with International Tennis is its controls. It's easy enough to volley the ball but hard to perform cross-court shots, lobs, or drop-shots. After consulting the manual I discovered the default "manual" mode is anything but manual!

If you want to influence your shots you have to set it to "fully manual". Seriously? Even then I found it hard to angle shots. Your positioning is supposed to play a role but it's all pretty vague. That said, competing against a friend is fun, as is challenging the CPU in a tournament. When switching sides both players perform "get loose" moves that make it look like they're dancing with each other. My friend Scott isn't a big CD-i advocate but even he had to admit this is impressive. © Copyright 2016 The Video Game Critic. 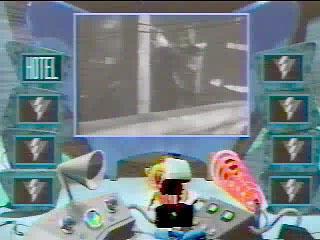 Jack Sprite versus the Crimson Ghost is a well-intentioned but ill-advised attempt to combine old black-and-white film clips with conventional 2D fighting action. For you youngsters out there under the age of 60, the Crimson Ghost was a 1950's detective serial featuring a frightening villain donning a ghastly skull mask. Despite the cool villain, most of the action in the series consisted of lame fistfight sequences between guys in suits.

In stark contrast, the star of this game, Jack Sprite, is a wacky, computer-animated geek who speaks in an annoying high-pitched voice. With Jack manning the "control desk" on the bottom of the screen, you view video clips by selecting from seven locations including a hotel, office, and warehouse. Jack narrates as you watch the grainy video, and prompts you to "inject him into the scene" at critical moments. When this happens, the game suddenly switches to a colorful screen with 2D graphics and sparse scenery.

Here Jack must punch and kick his way through a parade of goons that all look the same. These fights are extremely lame thanks to unresponsive controls and a limited number of moves. The quirky background music that plays during these fights is almost unbearable. Some action sequences end with an encounter with the Crimson Ghost himself, who serves as a boss. The main problem with this game is obvious: the pieces don't fit together very well.

Juxtaposed with the grainy video clips, the clean-looking 2D sequences look sorely out of place. And unlike campy games like Night Trap, you won't want to sit through these dull video clips twice. What nearly saves the game are some funny, Mystery Science Theater-inspired voice dubs that play when you select an irrelevant location. Nevertheless, the unlikable lead character and general poor design makes Jack Spite and the Crimson Ghost impossible to recommend. © Copyright 2004 The Video Game Critic.

Billed as "the ultimate electronic puzzle", Jigsaw lets you assemble old-fashioned puzzles by swapping "pieces" on the screen. And if you think that sounds boring, you're right! Jigsaw isn't as much a game as it is a prelude to a nap. The puzzles are sharp, digitized photos that range from Mount Rushmore, to a surfer on a wave, to a cat's face, to a scientist working with test tubes. You can peruse the categories by subject, and even select the shape of the pieces. The pieces are fairly large, so none of the puzzles take more than a few minutes to solve. As you methodically put the pieces into place, relaxing light jazz plays in the background. Philips could have injected some excitement into Jigsaw by incorporating some kind of scoring system, but they didn't bother. Puzzle fanatics may find Jigsaw mildly appealing, but most gamers will regard it as a pointless exercise. © Copyright 2007 The Video Game Critic.
Find Jigsaw on eBay, Amazon, YouTube, Forums
Copy link to this review
1 player
If you like this game, try: Kelly Slater's Pro Surfer (Game Boy Advance),
Tetrisphere (Nintendo 64), Atari Video Cube (Atari 2600),
Zenses: Rainforest Edition (Nintendo DS), Ecco The Dolphin (Sega CD)
Kether
Grade: B
Publisher: Philips (1993)
Posted: 2004/7/21

Rest assured that Kether is not just another cheesy FMV (full motion video) title. No, this is a fully interactive space expedition into the dark corners of the galaxy, or at least that's what the box says. Piloting a starship, your objective is to travel to five temples located on various planets. Your first challenge is to navigate one of the many harrowing obstacle courses. These stages involve negotiating an asteroid belt or weaving through the buildings of a city skyline.

Viewing your ship from behind, you must dodge obstacles while whisking through the scenery. The smooth graphics are basically pre-rendered movies, and they are very easy on the eyes. The Asteroid fields remind me of Silpheed (Sega CD, 1993), but the best stages let you navigate through virtual cities - they can be quite exhilarating at times. Alas, since your path is predetermined and the camera tends to swing wildly, it's difficult to judge the position of obstacles (nothing a little memorization won't help).

Once you reach the temple, you must solve a puzzle to gain entrance. This "puzzle" is little more than the classic game of Memory, except played with mysterious hieroglyphics. Once inside the temple, you find yourself in a dark labyrinth with a first person point of view. With the help of an overhead map, you must locate the six special rooms while blasting wandering monsters. Overly-sensitive controls and rough animation make these stages a bit frustrating, but they're still intense.

The graphics and audio effectively convey an aura of isolation and fear. Kether's first-rate voice acting, crisp sound effects, and futuristic synthesized music all add to the eerie atmosphere. Some of the screens look like works of art! I wasn't expecting much from Kether, but I found it to be an intriguing journey. © Copyright 2004 The Video Game Critic. 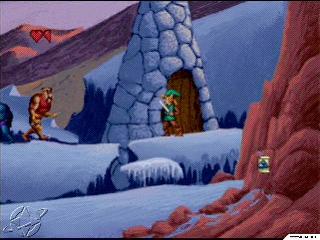 Some games are best left forgotten, and Link: The Faces of Evil is one such game. If Nintendo could turn back time, I suspect they'd bury every last copy of this ill-conceived hatchet job in some New Mexico landfill. Subtitled "The Humiliation of Link" (by me), Faces begins with a heinous cartoon intro portraying him as the most whiney pansy you've ever seen. Between the cringe-worthy dialogue ("how about a kiss for luck?") and the flamboyant "acting", it's impossible to watch this thing with a straight face.

The game itself is a marginal side-scroller, albeit with above-average graphics and sound. The music is well orchestrated, and the backgrounds are rendered in an old painting style. Sadly, the gameplay is marred by sluggish controls and cheap hits. Faces of Evil is less forgiving than its sister game (Zelda: The Wand of Gamelon), and there's too many unavoidable projectiles and deadly leaps. Certain creatures, like the baboons, seem mysteriously impervious to your sword.

The dialogue makes no sense, so speaking to characters will just leave you hopelessly confused. And why is it that when you exit the game, credits start to roll?! What the hell? Compared to the NES Zelda games, Faces of Evil is an utter disgrace, and Link was fortunate to retain his manhood after this debacle. On any other system this game would be considered "bottom of the barrel", but on a system so lacking in action titles, Faces of Evil seems almost respectable. © Copyright 2007 The Video Game Critic. 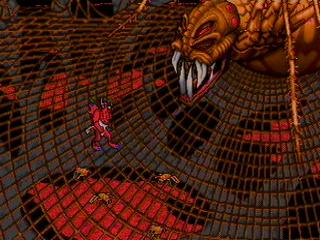 This game reminds me of a Disney version of Hell. You control an animated demon who battles monsters and solves puzzles in a fiery underground labyrinth. Litil Divil suffers from excessive cuteness (beginning with its name), but it's hard to knock the visuals. The cut-scenes are cartoon quality, and the game itself features large, nicely animated creatures. A well-orchestrated musical score also complements the action.

Playing the game involves wandering hallways, avoiding traps, solving puzzles, fighting monsters, and jumping platforms. You can also purchase items with money you'll find lying all over the place. The items you buy are used automatically and are required to defeat many creatures. As a rule, buy everything you can. One room features a gigantic, hideous spider, but once armed with the bug spray, you can spray it until its head explodes (gross!). Your game is saved to memory in special save rooms, but there need to be more of these.

Litil Divil excels in terms of eye candy, but its gameplay has problems. First off, the control is not what I would call responsive and the pacing is too slow. You'll absorb a lot of cheap hits. The hallways all look the same after a while, and even with the auto-map feature, you'll either become lost or just plain tired of wandering aimlessly. Although the canned animated scenes are amusing at first, you can't skip them, and you'll become weary of watching them over and over. In the end, Litil Divil is a nice showcase title for the CD-i that comes up short in the gameplay department. © Copyright 2002 The Video Game Critic.

May Cause Nausea
This ultra-rare CD-i title boasts some of the most vertigo-inducing visuals I've ever witnessed in a video game. As you careen down rolling, winding tracks in a pod-shaped car, you shoot obstacles to clear your path and trigger junction switches to change your course. With its smooth animation and first-person perspective, Lost Ride conveys the feeling of being on a roller coaster like few other games.

The sensation of speed is so convincing that I practically became ill during my first play session! But leave it to Philips to take a promising concept and totally ruin it. Lost Ride's main issue is its unreasonable difficulty. The first stage of any game should be relatively easy, letting the player become comfortable with the controls with learning the basic strategy.

Lost Ride's initial level is both sprawling and agonizingly difficult. It's set in a mineshaft, and zooming through tunnels and over suspended tracks is great fun - for the first half hour or so. But once you get tired of going in circles, you're ready to advance to a new stage. Good luck with that! Navigating the tracks requires constant checking of the map - which is only available at certain intervals. An onscreen map would have been helpful.

Switching tracks is needlessly tricky. While it should be a simple matter of shooting an arrow, more often than not your shots don't even register. That's a serious problem, because once you start heading in the wrong direction, it could be a long time before you work your way back. Since you're limited to the track layout, you're often forced to travel lengthy sections before reaching the next junction.

The shooting action in Lost Ride is lame. Although you can blast flying bats and boulders, these appear at random and it seems their only purpose is to break up the monotony. I should also mention that the game contains programming glitches that cause your "ride" to temporarily go off-track, although the program usually recovers. Lost Ride should have been called "Lost Opportunity". Had it been designed with shorter, more reasonable stages, it could have been a hit. © Copyright 2005 The Video Game Critic.