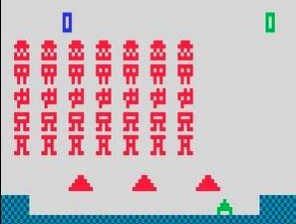 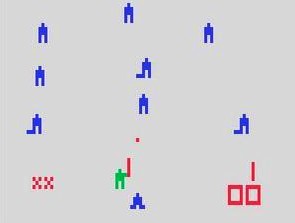 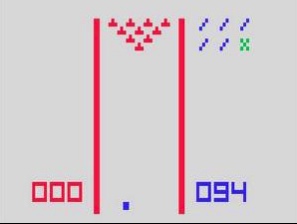 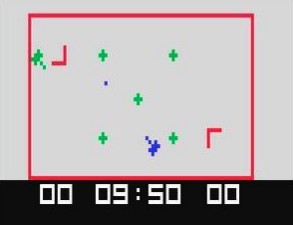 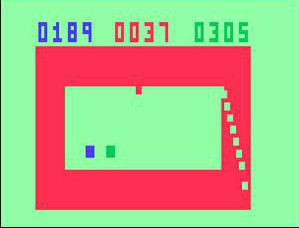 This primitive title is so slight you'd be tempted to dismiss it right off the bat. Not so fast, son! You control a blue square moving freely about an enclosed rectangular area. A red square then enters the "arena" and begins bouncing around. Your goal is to avoid making contact with it. It seems simple enough except an additional square enters the fray every 10 seconds or so.

Each new square seems to increase the difficulty exponentially. Not only do the squares move at various angles but they can carom off each other. This thoughtful feature makes it far more difficult to anticipate where the squares will end up. Your "death" animation is a bunch of concentric squares being rapidly drawn to random noises.

During each round a score "counts up" for as long as you can survive. With two people playing at once the player who survives longest has this score added to his total. It's a neat concept. Each round tweaks the formula slightly, with different sized "arenas", variable-sized blocks, and random speeds.

Sudz and I were pretty high on Dodge-It until we discovered an unfortunate flaw. Frantically moving around the screen is fun, but you'll rack up just as many points - probably more - by just hiding in a corner. Especially if you're a little block on a field with bouncing fat blocks, you'll last a lot longer and work a lot less.

That's a bummer because Dodge-It gets a heck of a lot of mileage out of a dirt-simple formula. This is dodgeball stripped down to its bare essentials. Had they only incorporated electric walls this would have been a hidden gem. © Copyright 2022 The Video Game Critic. 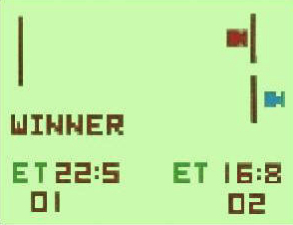