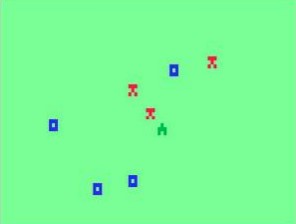 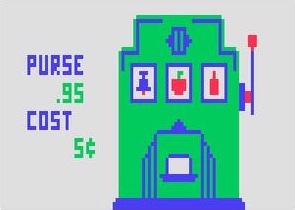 Slot Machine games tend to be a pretty worthless bunch but this one has a certain 1970's kitsch going for it. Its black-and-white title screen proclaims "Welcome to the Big Casino" surrounded by flashing light bulbs. The slot machine itself is large, colorful, and intricately detailed with fancy trim. There's even a coin return slot on the bottom.

You begin by establishing an overall "purse" which is the cash you will have to work with - 90 bucks or so. Before each turn you enter an amount, typically 50 cents. You pull the arm by pushing in on the controller, which feels a little backwards. The colorful spinning symbols include an apple, bell, and wine glass. I really like that "tick tick tick" sound they make as they go around.

In most cases the lanes stop on their own but one particular variation lets you stop them yourself, one by one. I thought this might give me the ability to "time" the symbols but as it turns out they are randomized. That pretty much confirmed my suspicion that this game boils down to 100% luck.

You need to get three like symbols in a row to win, which is hard. For the sake of this review however I felt obligated to do it once, if only to see what happens. Well, after about 100 pulls I managed to get three bells in a row. What happened? Besides a bump in my cash purse, absolutely nothing! What a buzzkill.

I looked up Slot Machine's instruction manual on the internet to see if I was missing any pertinent details, but what you see is what you get. You'd think they could have come up with partial payouts for specific combinations, but nope! This game is as brain dead as the sad, pathetic souls who play it. Oh wait... © Copyright 2022 The Video Game Critic. 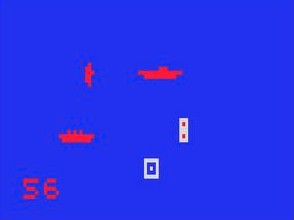 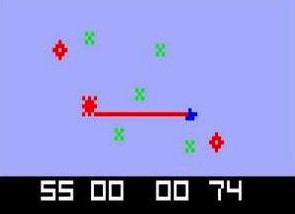 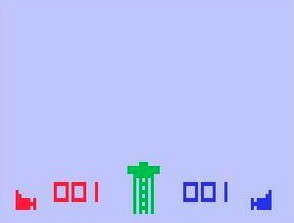