If you're a child of the 80's, you'll recall that the Cabbage Patch Kids dolls were the hot item that kept Coleco alive, even after the Colecovision faded and their Adam personal computer tanked. This rarely-sought-after game features one of those hideous dolls navigating a series of Pitfall-inspired screens. You'll swing on vines, jump over puddles, dodge bouncing apples, and things of that nature. The challenges are fun at first, but do get repetitive after a while. Still, the control is good and the cartoonish graphics aren't half bad. There's even a happy theme song that plays in the background, and it reminds me of Frogger. Cabbage Patch Kids isn't a bad game, but to be frank, there's nothing here to get excited about. © Copyright 2001 The Video Game Critic.
Find Cabbage Patch Kids on eBay, Amazon, YouTube
Copy link to this review
Our high score: 24450
1 or 2 players
If you like this game, try: Frogger II (Atari 2600),
Pitfall II: Lost Caverns (Atari 2600), Super Pitfall (NES),
Pitfall 2 (Atari 5200), Frogger II: Threeedeep! (Atari 5200)
Carnival
Grade: B+
Publisher: Coleco (1982)
Reviewed: 2006/6/25

Don't make the mistake of overlooking this oldie because it's a heck of a lot of fun. About as old-fashioned as you can possibly get, Carnival lets you move a gun across the bottom of the screen, aiming at three rows of moving ducks, bunnies, letters, and bonus items. You have a limited number of bullets, and once your supply is depleted the game ends abruptly. Remaining ammo is lined across the bottom on the screen, and low-flying ducks will actually swoop down and "eat" into your precious supply. If you ever wondered what it is that ducks eat, now you know it's bullets. Who says video games can't be educational?

It's possible to replenish your ammo by shooting boxes with numbers on them. A wheel of "pipes" rotates at the top of the screen, and you'll want to clear those out first, as their point values count down quickly. A large box on the top left periodically contains bonus bullets and points - just don't shoot it when it's displaying negative points! I always felt a second box was needed on the right side in order to balance things out, but instead the right side is used to keep track of your B-O-N-U-S letters, which you need to hit in order.

Carnival's graphics are bright and cheerful, and I even like the old-fashioned carnival music. Upon clearing each level, you're treated to a cool "shoot the bear" bonus stage, which lets you pump as much lead as you can into a moving bear. Back in the day, I remember how kids at the local bowling alley thought "shooting the bear" was the greatest thing in the world - and they were right! Subsequent bonus stages even let you take aim at two or three bears. Carnival is a simple, no-frills arcade title that even females have been known to take a liking to. © Copyright 2006 The Video Game Critic.

Centipede is indisputably one of the greatest shooters of all time, and this version is outstanding. Strangely enough, Atari seemed to make the best versions of its games for other consoles. The cannon, bugs, and mushrooms are extra large and the animation is silky smooth. Using Colecovision's Roller Controller (trackball) is a pleasure, giving you lightning-fast movement and pinpoint accuracy.

The action is relentlessly fun and incredibly addictive. Even women tend to gravitate towards this game - probably due to their hatred of bugs! The huge, hideous spider is a bit slower here than in other versions, but he also tends to linger near the bottom of the screen -- preventing you from getting a good shot at him.

The scorpion shows up early and often, and at 1000 points, he's always worth taking a shot at. By poisoning the mushrooms, he indirectly leads to most of your deaths. Centipede has three skill levels and comes with my highest recommendation. © Copyright 2008 The Video Game Critic. 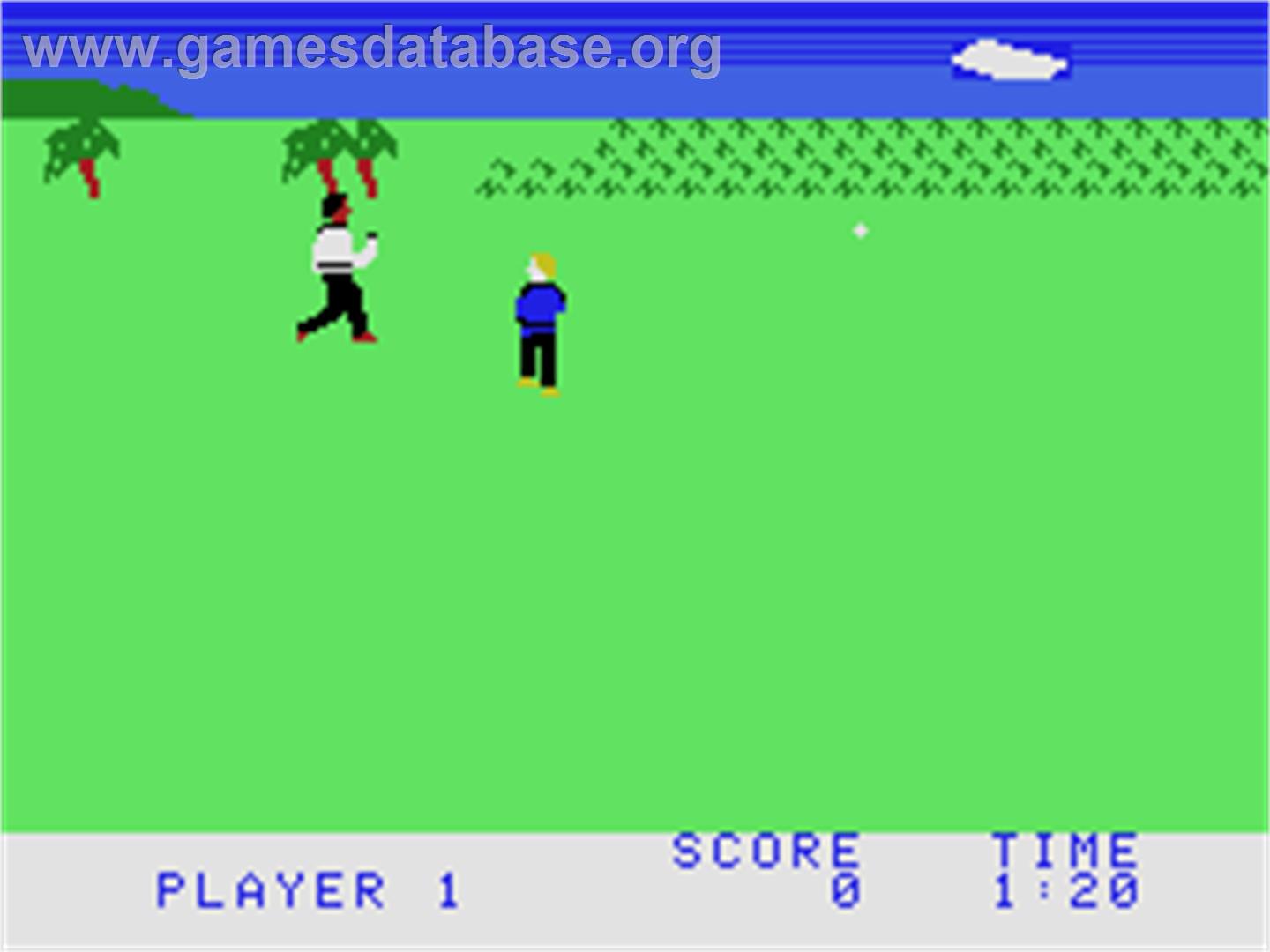 Coming fresh off my review of Chuck Norris Superkicks (Atari 2600, 1983) this Colecovision edition was exactly what I expected. It's the same game except with larger characters, detailed scenery, and stiffer controls. Your guy is a dead ringer for Chuck Norris and I love that spiffy blue uniform. When performing kicks I like how he turns his body sideways in a realistic manner. As you walk up a branching trail the scenery is rich with farms, forests, rivers, stone bridges, and mountains. This is a good-looking game!

Trying to stay in that narrow path can be pretty painful however as you wrestle with the rigid controller. During the fight sequences you'll battle preppy guys in Izod sweaters who throw stars like a girl. The collision detection is forgiving as you unleash punches, thrust kicks, and his patented Superkick. If you're familiar with the Atari 2600 game you'll have no problem picking up on this one.

The thing is, executing precision movements with the Colecovision controllers will take its toll on your hand. The approach to the final monastery stage is quite a sight as the majestic building rises before you. Only after beating about 30 blinking ninjas inside did I learn that Superkicks doesn't even have an ending! My wrist is still killing me! Much like Chuck Norris himself, this game will teach you the meaning of pain. © Copyright 2018 The Video Game Critic.

With colorful, pseudo-3D graphics, Colecovision's Congo Bongo made Atari 2600 fans of the early 80's green with envy (including me). The game stole a lot of ideas from Donkey Kong, but gave them a whole new dimension (literally). In the first stage, your explorer must climb a tiered cliff to reach the nasty ape at the top, named Congo Bongo. Along the way, he'll have to dodge coconuts, cross a bridge, slide down a hill, leap chasms and avoid monkeys.

The detailed graphics are an eyeful, although I would have much preferred a green color scheme instead of the ugly yellow/orange one. The splashing blue waterfalls look beautiful, and minor details like the little skull in a corner gives this game charm. Although the monkeys are mostly an annoyance, if two of them get a hold of you, they can hoist you over their heads and hurl you off the cliff! If only the other two stages were as interesting as this one!

The second stage is much less imaginative, featuring a wide-open savannah with charging rhinos all over the place. There are some holes to take cover in, but I've found that if you just jump a lot, you won't even need to use these. The last screen resembles a 3D Frogger, where you need to cross water by hitching rides on lily pads and hippos. This screen is attractive enough, but I found it frustratingly difficult. Worse yet, there's no payoff for reaching Congo for the third time - it's just back to the beginning of the game. Despite the uneven gameplay, Congo Bongo is a challenging, good-looking title. © Copyright 2003 The Video Game Critic.

I was overly harsh in my initial review of this game, unfairly comparing it to Scramble (a long-time favorite of mine). Cosmic Avenger is one of the more action-packed, challenging titles you'll find on the Colecovision. A side-scrolling shooter, you fire missiles at enemy rockets and ships (many shaped like Tie Fighters) while dropping bombs on ground installations. There are a lot of objects on the screen at a given time, and the action is intense!

Usually I prefer to play Colecovision games on skill level 3 (arcade level), but in this case I found it nearly insurmountable. As you move your ship towards the right side of the screen, your speed increases. While this may seem tempting, I'd highly advise against it because the frame-rate becomes choppy and the screen too chaotic.

Staying to the left and taking a slow, deliberate approach works better. I actually found it effective to hold in both buttons to fire nonstop. Sometimes you'll find yourself pursued by heat-seeking missiles, and I love how you can make them collide with other projectiles. That's a pretty advanced concept for an oldie like this!

On the downside, Cosmic Avenger's collision detection is erratic, and I don't like how touching an explosion will destroy your ship. In better shooters (including Scramble) it's always satisfying to fly right through the debris. Also, during the "underwater" stages, the high-pitched sonar "pings" got on my nerves after a while. Still, Cosmic Avenger provides a very exciting brand of space shooting action, and it's fairly addictive as well. © Copyright 2006 The Video Game Critic. 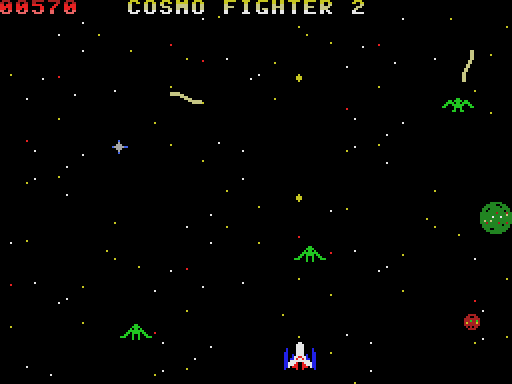 If you appreciate simplicity in video games, Cosmo Fighter 2 is as simple as they come. You move a cannon side-to-side across the bottom of the screen as assorted objects rain down at various speeds. The game has an appealing arcade look (circa 1982), complete with cycling demo screens displaying directions and point values. You'll face beakless birds (last seen in Atari 2600's Phoenix), heat-seeking Chinese noodles (my interpretation), and bouncing red hourglasses. There's even a big mother ship, although the chances of seeing that thing (outside of the demo screen) are slim.

For such a basic shooter, Cosmo Fighter 2 has a hell of a lot of things wrong with it! For starters, the background features descending planets and stars that blend in with dangerous aliens and missiles! You can fire your cannon rapidly, but pressing the button continuously is hell on your thumb, and your cannon tends to "cut out" periodically for reasons I have yet to discern.

The "beginner" skill level is insanely difficult, and the unforgiving collision detection certainly doesn't help matters. The sparse audio features some ear-piercing sound effects that are none too pleasant. When I asked my friends to describe this game, they replied with "Not good". Cosmo Fighter 2 has one thing going for it, and that's a challenge. You'll be lucky to last for two minutes, yet you'll keep coming back for more. Colecovision die-hards should check this out, but Cosmo Fighter 2 is just too sloppy to recommend to casual gamers. © Copyright 2008 The Video Game Critic.

Cosmo Fighter 3 is a vertical shooter with aliens that emerge from the top of a vertically-scrolling screen. The background graphics feature walls, forests, and lakes, but they look extremely grainy and the colors are ugly. Making matters worse is the jerky scrolling that's not at all pleasing to the eye. Each wave of aliens moves in a distinctive manner, including some that drop down quickly but high-tail back before you can get them lined up for a shot. The aliens are so much faster than you that shooting blindly is your only option.

Your ship fires two missiles at a time, but the fact that you have to pound the fire button continuously will absolutely kill your forearms. The challenge is there, especially when dealing with the first boss who teleports all over the screen. The background music has a happy-go-lucky vibe that doesn't seem to fit with the theme. I do like the game's opening sequence, which shows a spaceship landing on a partially-destroyed Earth. Cosmo Fighter 3 seems playable at first, but in the long run proves painful and unsatisfying. © Copyright 2008 The Video Game Critic.