Dam Busters was a difficult game to review, even harder to play. The instructions read like a military operations manual, and come with plenty of extra "official" looking documentation (makes me sleepy just to look at it). The apparent objective of this first-person simulation is to fly a fighter plane over enemy territory and blow up dams. Each button on the keypad brings up a different view, similar to the scheme used by B-17 Bomber on the Intellivision. Unfortunately, the game takes place entirely at night, so there's not much to see except a bunch of white pixel "lights". The controls are extremely complicated and require hours to master. Dam Busters is one of those titles for people who love to pore over details. Personally I found it to be hopelessly confusing and dull. © Copyright 2000 The Video Game Critic.
Find Dam Busters on eBay, Amazon, YouTube
Copy link to this review
1 player
If you like this game, try: Intellivision Lives (Nintendo DS),
The Dam Busters (Commodore 64), B-17 Bomber (Intellivision),
Ace of Aces (Atari 7800), Stealth (NES)
Defender
Grade: B
Publisher: Atarisoft (1983)
Posted: 2016/9/8 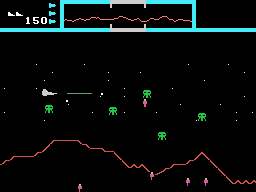