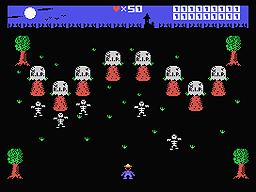 This one transports me back to 1982 when I could be found playing Jungle King over at the old Westview Mall. Perhaps due to copyright issues the name was changed to Jungle Hunt and the main character was altered from Tarzan to a snooty European explorer. With his short shorts, dress shoes, and a safari hat, this guy looks like a total dork.

The opening vine stage is more challenging than it looks. In some versions of Jungle Hunt you can blindly leap between vines and make it most of the time. Here the vines are widely spaced so you need to take your time. Make sure that next vine is swinging towards you before you commit.

The programmer did a bang-up job with this stage. I love how the vines rotate smoothly, as if the programmer actually used math! I also like how the upper reaches of the granular vines are partly obscured by tree leaves, flickering in and out of view. Even if unintentional, it looks striking.

After navigating the vines your character dives head-first into a raging river. While swimming through turbulent waters you'll want to look out for crocodiles that swim erratically. Hitting a button lets you stab them with a tiny knife, but point values don't appear on the screen, making the experience less satisfying than other versions.

Next you find yourself ascending a hill while jumping over and ducking under bright red boulders. I like how you run faster as you move toward the left side of the screen. You can jump pretty far but the stage is harder than it looks, especially when the large boulders appear.

Upon reaching the cannibal stage you find your girlfriend suspended over a boiling cauldron, guarded by a pair of green natives you must leap over. The screen may not win any awards for politically correctness but it looks pretty remarkable. During the next round a huge monkey appears on the vines. Any contact with him will cause you to fall, and he's really hard to avoid. All in all however I'd rate this version of Jungle Hunt every bit as fun as the one I remember from back in the day. © Copyright 2021 The Video Game Critic.