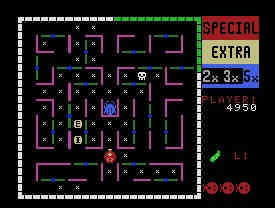 It would be tempting to write off this game as just another Pac-Man clone, but Ladybug has its charm. It's a likeable little maze game with some interesting features. You control a ladybug being pursued around a maze by nasty, evil bugs. The maze and dots look pretty standard, except for the fact that there are turnstiles all over the place that let you dynamically change the layout. These allow you to cut off your enemies and sometimes even isolate them in enclosed spaces.

Unlike most maze games, there's no way to turn the tables on your enemies -- you're always on the run. Adding some variety are scattered bonuses and letters you can collect to earn a free bug. There's nothing fancy about the graphics, but the background music is pleasant enough. I found the control to be a bit stiff. I sometimes got caught up on the walls, and my hand started to ache after a while. But other than that, Ladybug is just good clean fun. © Copyright 2002 The Video Game Critic.

Was Looping really an arcade game? Never heard of it. To be honest, this game didn't do much for me. It's a side scrolling airplane shooter where you can fly forwards, upside-down, and perform loops (hence the name). Your initial goal is to destroy a few missiles on the ground below while being attacked by hot air balloons. Some missiles are protected by buildings that you'll need to break through.

Once the missiles are destroyed, you must navigate a series of narrow mazes while shooting the occasional obstacle. During this part of the game you'll hear music that wouldn't be so annoying if it weren't so freakin' LOUD! If you reach the end of this section, you're off to the next stage, which is slightly faster.

The graphics aren't bad; there's plenty of detail and color. Looping has other problems, however. The control is super-sensitive; hardly providing the precision required to navigate the tight, narrow mazes. The collision detection is poor, and the game feels sloppy in general. Most importantly, it's just not much fun. © Copyright 2001 The Video Game Critic. 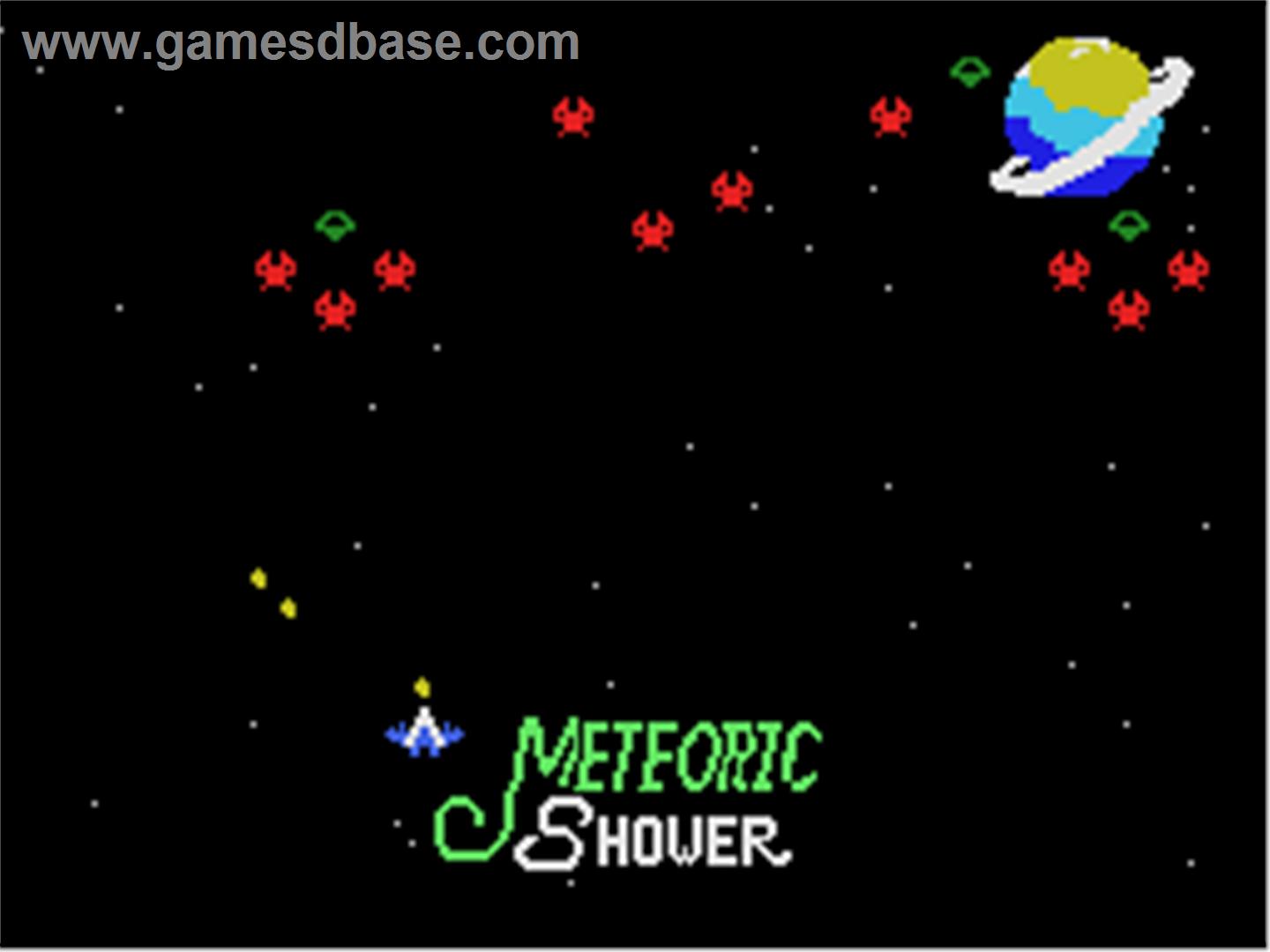 This game comes built into the DINA; a cheap, poorly-made Colecovision-compatible system. Meteoric Shower is a pretty basic Galaga-style shooter, but there's more freedom of movement and you can shoot both up and down. The background music is awful, and the graphics aren't anything to write home about either. The aliens are high-resolution, yet single-colored. They start out in formation; then break off into groups. Soon they're flying all over the place. It's tough to pick these guys off, especially when there's only one or two left; and they tend to ram your cannon from below. Meteoric Shower is mildly amusing for a while, but non-DINA owners aren't missing anything. © Copyright 2000 The Video Game Critic.
Find Meteoric Shower on eBay, Amazon, YouTube
Copy link to this review
Recommended variation: 3
Our high score: 7200
If you like this game, try: Sega-Galaga (Sega SG-1000),
Galaga (Atari 7800), Galaga '90 (Turbografx-16),
Basic Programming (Atari 2600), Demon Attack (Atari 2600)
Miner 2049er
Grade: A
Publisher: Micro Fun (1982)
Reviewed: 2004/11/26 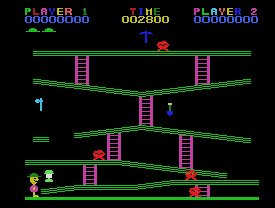 This cheesy-looking platform game is a slick combination of Donkey Kong and Pac-Man, and it's probably more fun than either one of those. The star of the game, Bounty Bob, looks like a complete dork, but moves with a swiftness rarely seen in this type of game. Each of Miner 2049er's eleven well-designed screens contains a series of girders connected by ladders.

The girders are initially hollow, but solidify as Bob walks over them. To complete each stage, Bob must walk over every inch of girder on the screen. Slow-moving, blob-shaped "mutants" patrol the girders, but these are easy to avoid and far less dangerous than the running jumps you'll need to execute. Touching a floating tool lets Bob attack the mutants for points, just like Pac-Man.

Yes it's all very derivative, but Miner's speedy pace and crisp graphics make it exceptionally fun and addictive. It's also intriguing to see what sort of imaginative challenge each new stage has in store. The second stage is clearly inspired by Chutes and Ladders, and the third has an elevator controlled by the numeric control pad. Miner 2049er is a whole lot better than it looks, and is regarded by many as a classic. © Copyright 2004 The Video Game Critic.

I have fond memories of this one from my Atari computer days of the early-1980s. Montezuma's Revenge took the Pitfall brand of exploration to the next level. After your explorer climbs down into a pyramid, he enters an intriguing underground world composed of contiguous screens with branching paths. Some of these screens are surprisingly complex, with ladders, poles, moving platforms, traps, spiders, snakes, and rolling skulls. There are keys that let you access new areas and large gems that add to your point total. Although you can't really attack a creature, it will be destroyed if you're holding a sword item as you run over it.

On my Atari computer Montezuma's Revenge was a monument to good programming, boasting crisp graphics and perfectly responsive controls. But despite sharing many of the same traits, this Colecovision edition is barely even playable! To call the controls "touchy" would be the understatement of the year. It doesn't help that your character can't survive a fall of any height. Gravity is not your friend, and it feels like your guy is wearing a freakin' lead vest! You'll fall off the same ledge over and over again, burning through all of your lives trying to make one simple jump.

I also hate how you need to be perfectly lined up with a ladder in order to climb it. Scratch that - you have to be one pixel to the left of the ladder, and finagling you way up and down these things is a chore. That's one problem that could have easily been rectified by a good programmer. The game's pacing is too frenetic in general, with scampering spiders and rolling skulls which give you little time to react. On paper, Montezuma's Revenge is an amazing game, but frantic controls render it nearly unplayable. © Copyright 2009 The Video Game Critic. 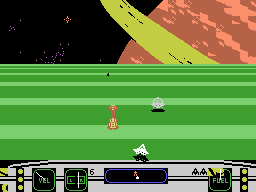 I always had a thing for Imagic titles. While Activision preferred to keep their games simple and clean, Imagic wasn't afraid to add a little flair. Just check out their shiny, silver packaging! Moonsweeper's first screen is a difficulty select of sorts as you move your cursor to one of four galaxies of varying point values. Next you find yourself moving a ship across the bottom of the screen as a huge image of Saturn looms in the background.

Various comets, meteors, and satellites slingshot around the planet, approaching quickly from the left. In theory you can shoot them down but they come in at such a severe angle I found myself losing ship after ship! The secret is moving from side-to-side which somehow causes objects to be evenly dispersed across the screen. That doesn't make any sense. Touch one of the small, colored marbles - umm I mean "planets" - and you're transported to its surface. Now you're flying into the horizon while picking up miners and blasting red towers.

Orbital spacecraft travel across the top which you can pick off like the motherships in Space Invaders (Atari 2600, 1980). They drop destroyer ships which antagonize you to no end. Momentum makes it hard to fire with precision and errant shots tend to blow up innocent miners. Save enough of those poor bastards and you can pass through white "accelerator" rings to escape the planet's atmosphere. There's quite a bit happening in Moonsweeper but I'm sad to report that none of it is particularly good. © Copyright 2021 The Video Game Critic.

In this likeable arcade classic you are a mouse being pursued by cats through a maze full of cheese. What makes Mouse Trap unique is the ability to toggle red, blue, and yellow doors by pressing color-coded buttons on the keypad. This adds a nice element of strategy as you manipulate the maze to your advantage, creating escape routes and sometimes even trapping cats into confined spaces. Until you really get the hang of it however, you'll need to peek at the keypad a lot, and that can get you killed!

Collecting scattered bones generates a cool "ruff" sound effect, and also lets you transform into a dog (via the dog button) to turn the tables on those evil felines. Just remember to keep an eye out for the deadly hawk that constantly glides over the maze. Mouse Trap for the Colecovision is a nearly flawless translation with its crisp graphics, fast pacing, outstanding sound effects, and bouncy background music.

The one thing that could be improved is the controls. Instead of easily lining up with corridors, your mouse has a tendency to get "stuck" on corners. I struggled with the controller and it took its toll on my hands, putting a serious crimp in the fun. Other than that, this game is money. © Copyright 2007 The Video Game Critic.

Back in the day a lot of gamers (including myself) dismissed Mr. Do as a Dig Dug knock-off. While that's not an unfair characterization, this is not a bad game. Mr. Do is a clown who tunnels through his orchard while being pursued by generic gnomes referred to in the instructions as "badguys". Instead of clearing waves of enemies, your goal is to collect cherries scattered around the maze (including the stems).

Apples serve the same role as the rocks in Dig Dug, allowing you to crush the baddies for big points. Unlike Dig Dug, these apples can be shoved sideways as well. Enemies can push them too, and sometimes you'll even find yourself in a shoving contest. This apple-pushing adds a new layer of strategy, but long-time Dig Dug fans may have trouble wrapping their brain around the concept at first.

Mr. Do's controls are a little stiff, and after tunneling under an apple, you need to move down slightly before moving over to get out of its way. I like how enemies sometimes inadvertently drop apples on each other. Mr. Do also has the ability to fire a "magic ball" which bounces around the maze until it hits something. Bonus items like cake, ice cream, and Wheat Thins appear in the center of the screen, but it's hard to predict the effect of grabbing these. Sometimes it freezes enemies in place, but sometimes it unleashes an army of purple "munchers".

A bonus system lets you earn a free life by spelling "EXTRA", but the indicator for this is cluttered by confusing symbols and colors. Coleco prided itself on its arcade-to-home conversions, but this one falls a little short. In the arcade Mr. Do was a colorful clown, but here he's just solid white. His magic ball had a lot more visual pizzazz in the arcade; it's little more than a bouncing pixel here. The maze is well defined however and the bonus items look sharp. In the final analysis, Mr. Do succeeds in taking the Dig Dug formula to the next level. It's a little convoluted, but those who dig in will be intrigued by its depth and strategy. © Copyright 2011 The Video Game Critic.