This Defender clone has so-so graphics and mediocre gameplay. A side-scrolling space shooter, your ship can drop bombs as well as fire lasers. Your mission is to protect cities on a planetary surface, giving the game a Missile Command flavor. The cities are surrounded by shields, which weaken after sustaining enemy hits. You can recharge them by transporting energy from "energy depots". Although it's probably the most original aspect of Nova Blast, the process of transferring energy is tedious and not the least bit fun. The rapid-fire shooting action is better, but the bomb controls are weak and trying to hit your target can prove frustrating. Overall, Nova Blast is too generic to hold my interest. © Copyright 2001 The Video Game Critic.
Find Nova Blast on eBay, Amazon, YouTube
Copy link to this review
Recommended variation: 5
Our high score: 15500
1 player
If you like this game, try: Nova Blast (Intellivision),
Missile Command (Atari 5200), Space Spartans (Intellivision),
Missile Command (Playstation), Space Ranger (Philips CD-i)
Oil's Well
Grade: B-
Publisher: Sierra On-Line (1984)
Posted: 2017/7/15

Pepper II borrows heavily from both Pac-Man and Qix, but has enough originality to be interesting. You control an angel that moves around mazes, "zipping" up different areas. It's a bit like playing Qix -- on tracks. You are pursued by sets of eyes, which you can turn the tables on by zipping up an area containing a pitchfork. This causes you to become an invincible "demon" for a short period of time. One cool feature is the ability to move between four different maze screens, which you can complete in any order. Pepper II features good control and fun music ranging from the Alfred Hitchcock theme to Zip-a-dee-doo-da. It may be derivative, but Pepper II is definitely a good time. NOTE: No, there was not a Pepper I. © Copyright 2000 The Video Game Critic.
Find Pepper II on eBay, Amazon, YouTube
Copy link to this review
Recommended variation: 3
Our high score: STP 141,180
1 or 2 players
If you like this game, try: Ms. Pac-Man (Atari 5200),
Jr. Pac-Man (Atari 5200), Happy Trails (Intellivision),
Amidar (Atari 2600), Pac-Man Collection (Atari 7800)
Pitfall
Grade: A-
Publisher: Activision (1983)
Posted: 2000/4/13

This is basically the same game as the classic Atari 2600 version, a few subtle differences aside. First of all, the sound effects are slightly improved. The trees and bushes in the background are more detailed, but the treasures actually look worse (what the heck IS that thing??). But the most noticeable change is Pitfall Harry himself! He definitely looks "thicker" in this version. Apparently he got lazy after his Atari success and let himself go a little. I'm not saying that the guy is overweight, but he's picked up at least 20 pounds! Otherwise, the game plays like every other version of Pitfall. Too bad they couldn't improve upon the graphics for this Colecovision edition. Even the scorpion looks exactly the same. © Copyright 2000 The Video Game Critic.
Find Pitfall on eBay, Amazon, YouTube
Copy link to this review
Our high score: 5576
1 player.
If you like this game, try: Pitfall (Atari 5200),
Super Pitfall (NES), Ultimate Mortal Kombat 3 (Super Nintendo),
Pitfall II: Lost Caverns (Colecovision), Pitfall II: Lost Caverns (Atari 2600)
Pitfall II: Lost Caverns
Grade: B+
Publisher: Activision (1984)
Posted: 2017/7/15 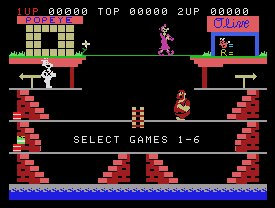