I have a lot of fond memories of playing this over a friend's house as a kid. I love the concept. Venture is Dungeons & Dragons boiled down to its most basic elements. You enter a room. You kill monsters. You collect treasure. The simplicity is beautiful. Each room has its own unique treasure and set of monsters, although they do eventually repeat.

Each "map" features a set of rooms you can navigate between by steering a little dot past wandering "hall monsters". Each room you enter has a unique layout, and some even contain traps or hidden walls. You'll face goblins, skeletons, serpents, spiders, and hydras just to name a few. Since the creatures are all basically the same size, the "dragons" look more like yapping dogs.

You control a happy face with a bow and arrow. Taking aim at monsters is much easier said than done because the controls are terrible! Especially when trying to fire diagonally, I feel as if I'm fighting with the controller the entire time! Part of the problem is the inexplicable split-second pause that occurs whenever you change directions. Also, instead of maintaining your position, holding in the fire button causes you to edge towards your target. This is a serious problem because most of the time you're operating in close quarters.

When you shoot a monster the image of the creature shot with an arrow looks cool, but don't touch the corpse or you will die. Just wait for it to disappear instead. Venture's fun graphics and harmonized music are charming, which makes the poor controls all the more difficult to accept. What should have been a fun romp feels like an exercise in frustration. © Copyright 2022 The Video Game Critic. 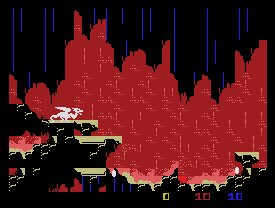