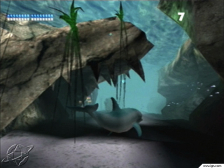 Ecco was a wonderful non-violent title for the Sega Genesis, but playing this Dreamcast edition is a miserable experience. The artistic graphics, serene music, and crystal clear audio are totally wasted on this unmitigated disaster. Defender of the Future is such an ordeal to play that you couldn't pay me to finish the thing!

The opening cinematic explains how humans and dolphins have joined forces to protect the earth from some intergalactic evil. Must the fate of the world hang in the balance in every video game? This is supposed to be about a damn dolphin for crying out loud! Ecco's heavily constrained underwater environments feature colorful coral and sunny tropical scenery above the water line. The sea life is well animated and Ecco contorts himself realistically as he turns in the water.

The production quality is high, but the playability is rock bottom! This game is so frickin' hard that you'll need to consult an FAQ just to complete the tutorial! And even the guy who wrote the FAQ describes the learning curve as "vertical." Your first order of business is to locate and save a baby whale, and if this task leaves you feeling bewildered, it's just a microcosm of the entire game.

Your main source of guidance comes from talking gems that speak in incomprehensible riddles. You'll come upon a purple gem only to be told "Power of Vigor - you have not mastered yet". What the [expletive]? The worthless manual doesn't help, failing to explain even some of the most basic moves. The arduous stage two is infuriating enough to make David Banner turn into the Incredible Hulk!

Did I mention how the topsy-turvy camerawork made me nauseous? I couldn't play this God-forsaken game for more than 20 minutes without wanting to barf! I actually had to take Dramamine just to get through this review (seriously). Who says playing video games can't lead to a drug habit? Defender of the Future is a gateway drug - to untold pain and suffering. © Copyright 2010 The Video Game Critic. 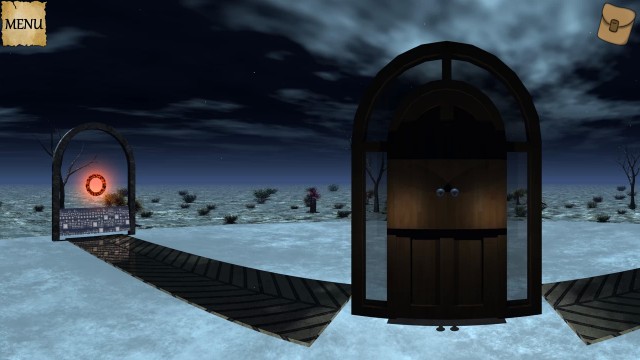 This package offers two separate games: Elansar and Philia. Both are point-and-click adventures in the tradition of Myst (Jaguar, 1995). Myst was pretty popular in the mid-90's, but that may have been more due to its surreal graphics than its obtuse puzzles. If you're looking for a slow-paced, thought-provoking experience, this two-disc set is a good deal.

In both games you move a cursor around the screen, clicking to interact with objects and navigate a computer generated landscape. I would highly recommend using a Dreamcast mouse because dragging that cursor across the screen using the analog stick is just tedious. Elansar lets you explore a deserted island, collecting random items like a bracelet, hammer, and piece of rock.

The static island scenery is sharp and colorful, and the sound of waves pounding the surf is immersive. As you sweep the cursor across the screen it will become an arrow if you can move or a hand if you can grab something. The problem is, the game doesn't always make much sense and it feels like you're just trying to exhaust every possibility.

Somebody went through the trouble of incorporating rumble support for the Dreamcast controller, and it's effective. If only they bothered to incorporate some way to save your progress! Navigating the island is disconcerting to say the least. The screens aren't arranged in a neat grid as you might expect.

I enjoyed Philia a lot more, as it keeps you in confined areas full of mini puzzles and treasure-hunting challenges. The landscapes are surreal and dreamlike, and the jazzy background music is relaxing. Elansar and Philia will probably put most gamers to sleep, but cerebral types will appreciate this thoughtful combo. © Copyright 2015 The Video Game Critic. 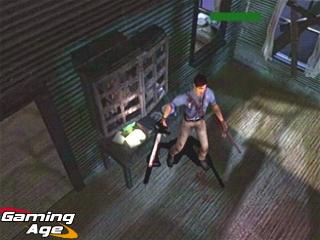 I've been an Evil Dead fan for many years, often citing Evil Dead 2 as one of the greatest movies of all time. No other film has so effectively combined action, horror, and humor. And just for this game, actor Bruce Campbell has returned to lend his voice to the main character, Ash. So as you can imagine, I was pretty disappointed when I realized how mediocre this game is.

The gameplay is almost exactly like Resident Evil, right down to storing items in chests. One difference is that all relevant items shine like beacons, eliminating the element of exploration. I enjoyed the audio track, with sound effects ("I'll swallow your soul!") and music taken directly from the film. The background graphics are outstanding and a feast for the eyes. I love being about to walk around that old cabin and explore the surrounding areas. The pre-rendered rooms and outdoor areas capture the spirit of the movie very well.

If only the monsters looked so good. But no, the ghosts, zombies, and skeletons are so incredibly blocky that it's almost comical. And the control is a nightmare too. Ash is slow at turning and constantly getting stuck in the scenery. And if you thought battling monsters with a chainsaw would be fun, think again.

Fighting is nothing but button mashing, and it gets so tiresome that you'll soon try to avoid confrontation altogether. Unfortunately, the creatures regenerate constantly and love to block your path. It's especially painful when you get lost in the endless maze behind the cabin. Hail to the King fails to capture the edginess or humor of the movie, and poor control and repetitive action are like nails in the coffin. © Copyright 2001 The Video Game Critic. 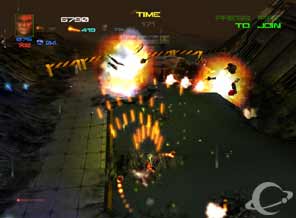 Expendable brings to mind a game called "One" released on the Playstation a few years back. It's an all out blast-a-thon, with dark environments, aliens, robots, and magnificent explosions. The idea is simple: move around and shoot the hell out of everything in sight. You view the action from up high and behind your man, and a useful strafe feature makes it easy to aim and maximize your damage. The camera angle sometimes moves to the side for no good reason, but this isn't a major problem.

Expendable certainly delivers some serious shooting satisfaction! Your firepower is awesome. You can run out of ammo, but there's always plenty more lying around. The levels and bosses are a pretty unspectacular, but at least there are some branching paths and secret side areas. There's a two-player simultaneous mode, but it's way too confusing with all the destruction going on. I like Expendable for its mindless mayhem, but its replay value is pretty low. © Copyright 2001 The Video Game Critic.