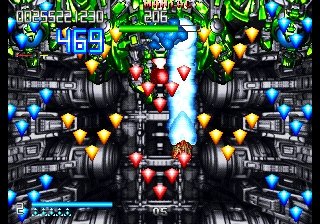 It's good to know that people are still making quality Dreamcast titles. Somebody's got to keep this thing going for Pete's sake! While it might look like a garden-variety vertical shooter, Fast Striker has extraordinary depth. The game also has a fine sense of humor, evident by the load screens warning of "Huge load times ahead!"

Unlike many other vertical shooters, Striker consumes the entire screen. The action is 2D in nature, but objects are very large and rendered in full 3D. Enemies tend to rotate and bosses sometimes reassemble themselves as if they were Transformers. The backgrounds are nearly photorealistic, but the repetitive gray industrial scenery is pretty bland. It's easy to spot danger, but enemies lack distinctive forms, looking like blobs of flying metal.

What makes Fast Striker intriguing is its rich control scheme, which allows for plenty of technique. You spray missiles when you tap the fire button, and unleash a concentrated stream when you hold it down. When not firing, bonus pods gravitate toward you, giving you reason to let off every few seconds. Another button lets you fire behind your ship, which is unusual but not particularly useful.

There's also a shield button that comes in handy when faced with a barrage of missiles with no escape in sight. Actually, escape is usually possible thanks to some extremely forgiving collision detection. Unless your ship takes a hit dead center, you can often weave your way through a torrent of missiles with miraculous results.

Fast Striker isn't easy, but it's possible to get into a zone. The less thinking you do, the better! The game is designed to be played for high score, and when I say high, we're talking 12 digits long. Continues are available, but they reset your score (as they should). There are four game variations, each with its own ship and difficulty level.

Fast Striker is designed for shooter enthusiasts, but you don't need to understand advanced techniques to enjoy the game, and figuring it out is half the fun. The upbeat techno music is appealing but not particularly catchy, and it tends to cut out on occasion. High scores are saved to VMU for each skill level, and codes are provided so you can post your high scores on-line. First Striker is fun to play for score, and its depth is sure to intrigue hardcore fans. Note: This is a region-free CD. © Copyright 2011 The Video Game Critic. 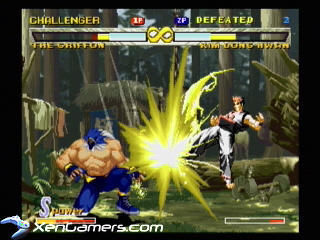 Mark of the Wolves is mainly distinguished by the fact that it's the first game to feature a fighter named Butt (I kid you not!) You might think that alone would be enough to earn it an 'A', but compared to Capcom Vs. SNK or King of Fighters Evolution, Fatal Fury looks somewhat dated. Heck, the faces on the character selection screen are so pixelated you can barely make them out!

The fighters in the actual game don't look much better, but at least they're animated nicely, although a little on the small side. Most of the characters are your typical martial arts variety, but there's also a huge guy with a little bird head, the aforementioned black guy named "Butt", a bratty little boy, and a sexy woman who enjoys hanging out with sailors. The backgrounds are completely 2D, but are quite appealing in a Street Fighter II kind of way. I especially like the downtown scenes.

The gameplay features some cool twists on the standard formula. First of all, before each fight you position your "T.O.P." meter over your life gauge, providing extra strength depending on the status of your life bar. "Just Defended" moves give you back life if you successfully block a series of attacks, and "Guard Crush" wears down your opponent's ability to block. No question about it, this is some solid 2D fighting action, even if it does look old. There's also plenty of humor and some impressive artwork you can open up. I just wish the game didn't constantly ask if I want to save. © Copyright 2002 The Video Game Critic. 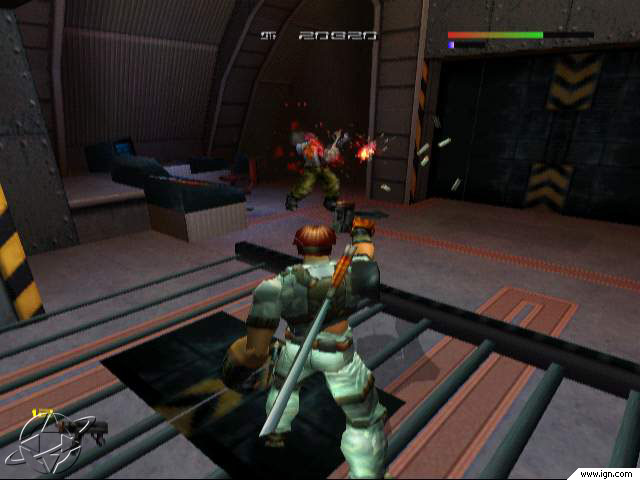 Playing Fighting Force 2 is like participating in an experiment to see how much pain the human body can endure. I haven't had this much fun since being kicked in the groin in the eighth grade. The first Fighting Force (Playstation, 1996) had its share of issues, but at least it didn't take itself very seriously. Fighting Force 2 has no sense of humor and its uninspired gameplay blows enormous chunks.

I can understand why Eidos dropped the two-player mode from the first game (the camera was unwieldy), but there's no excuse for such a lackluster single-player mode. The opening sequence explains how you are a super-cop trying to infiltrate evil corporations. You get a tantalizing glimpse of a Blade Runner-style futuristic world, but don't get too excited because you'll be relegated to exploring concrete bunkers. These rooms look so similar that it's hard to tell if you're forging ahead or backtracking.

The awful graphics feature chunky characters and unsightly pixelation. Some of the henchmen look like Power Ranger rejects and they don't put up much of a fight. There are weapons all over the place, but who needs them? The controls are terrible. Your character will sometimes refuse to grab a ladder right in front of him, and he'll sometimes turn in the wrong direction while engaged in hand-to-hand combat. There were times when I couldn't interact with a computer system just because I couldn't figure out how to put my [expletive] weapon away!

The touchy analog controls make it nearly impossible to navigate narrow walkways, and the collision detection is an absolute joke. At one point a conveyor belt sucked me into a grinding wheel where I was helplessly stuck as I watched my life dwindle to nothing. Not my idea of a good time! A cheat code let me preview advanced levels with labs, factories, and prisons, but it was basically just more of the same. When Eidos began releasing throwaway titles like Fighting Force 2, it became obvious that the once-respected company had officially entered free-fall mode. © Copyright 2011 The Video Game Critic. 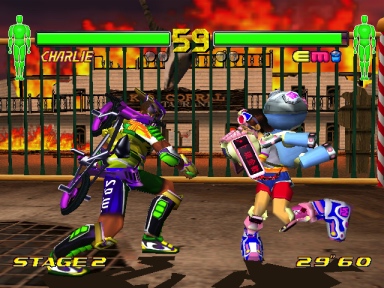 The original Fighting Vipers (Saturn, 1996) was a showcase title, so it's a shame this fine sequel never saw an American release. Fighting Vipers 2 retains all the spirit of the original, only with crisper graphics, tighter controls, and a few new additions. The character models are chunkier than those in say, Soul Calibur (Namco, 1999), but that's partly due to the game's armor system. It's possible to weaken portions of your opponent's armor, but considering how quick the matches are (45 second limit) that's rarely a factor.

The vibrant visuals, fast action, and dramatic camerawork really have the feel of an arcade coin op. I highly recommend using a sturdy joystick, as you can expect a lot of aggressive button tapping. The fighting action is wild and it's possible to jettison your foe right out of the enclosed arena. It's especially satisfying to send his ass off a building, although you never see where he lands. Apparently it was on an awning or in a dumpster because he's right back for the next round.

Arcade mode offers a string of eight battles, and there seems to be some kind of branching stage mechanism I couldn't figure out. I hate it when I need to face "myself" in battle. Even with different color palettes I always find it confusing. Like the original Fighting Vipers the stages boast magnificent skylines with soaring skyscrapers against the night sky. I love that! Even more spectacular views can be seen in the cinematic intro.

It's a shame that the scenery in stages like the museum is obstructed by ugly fencing. And why aren't the characters rendered on the character selection screen? Did they expect players to know them all by name? But these are minor issues. Fighting Vipers 2 follows the tried-and-true formula of the original and the results are every bit as good. © Copyright 2017 The Video Game Critic. 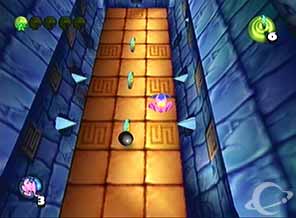 Just when I thought Hasbro was in way over their head in the video game business, they actually released a half-way decent Frogger game. Don't get me wrong, Frogger 2 is not great, but it's a frickin' masterpiece compared to their first Frogger game (Playstation). The biggest improvement is in the control department. Unlike the slow, lazy frogs in the last game, these frogs are quick and responsive. Sometimes they're too responsive, causing you to accidentally take that extra hop into the abyss.

The graphics are nice, and the stages are simple enough that you can easily tell where you're going. It's that simplicity that gives this game a tiny bit of the flavor of the original classic game. In addition to the adventure mode, there's an "arcade mode" with some "retro-inspired" mini-games. Although these mini-games feature bits and pieces of the original Frogger, a true emulation of the original game is nowhere to be found. The multiplayer mode, which consists of a series of frog races, isn't much fun at all. © Copyright 2002 The Video Game Critic. 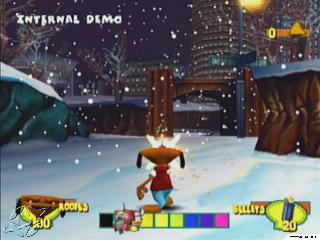 Fur Fighters will always be a sentimental favorite to many Dreamcast faithful. It stars a cast of loveable animals blasting each other to hell with automatic weapons. To be fair, this game contains about as much violence as a Bugs Bunny cartoon, so the "teen" rating is an absolute joke.

Played from a third-person point of view, Fur Fighters lets you switch between a number of animal characters. Naturally, each possesses a special ability. The hound can burrow, the cat can climb, the penguin can swim, the kangaroo can jump - you get the idea. Unlike most adventures which feature an evil scientist seeking world domination, Fur Fighters features an evil cat seeking world domination.

Your main goal is to rescue baby animals scattered throughout seven enormous stages, including New Quack City, a jungle, and a futuristic dinosaur metropolis (huh?). The stages are surprisingly well crafted, and when you see the towering buildings and beautiful falling snow of New Quack City, you'll realize the designers actually put some effort into this game. The stages are generally fun to explore, and while the graphics aren't the best you'll see on the Dreamcast, they have a certain charm.

The controls on the other hand take some getting used to. Using the four face buttons to move is not intuitive, and aiming using the analog stick is touchy (although the auto-aim feature helps a lot). The initial training stage is so painfully boring that it actually gave me a headache. Once the action is officially underway, not only do you need to switch animals often to reach new areas, but the babies can only be saved by animals of their same species. For the life of me, I can't think of any good reason for this stupid rule, and it makes the game all the more tedious.

Shooting cuddly animals is satisfying however, and I enjoy the dramatic "death" animations. The puzzles make sense, but the game is definitely slow, lending itself to brief play sessions. Fur Fighters really falters in its four-player split-screen mode. It should have been a good time, but the overly-complicated, maze-like arenas are a confusing mess.

Without a doubt, Fur Fighter's best feature is its outstanding soundtrack, which won me over in a big way. Not only are its unique, jazzy numbers easy on the ears, but they actually give the game a distinct personality. For the most part Fur Fighters is an average platformer, but more patient gamers will find a lot to like. © Copyright 2007 The Video Game Critic.