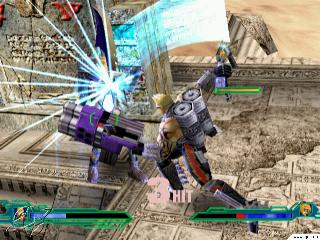 Did Capcom truly believe that a heavy metal soundtrack could justify a whole new fighting game? According to my friend Scott, there are some big musical names here, including Megadeth and Halford, but it's hardly enough to carry a mediocre fighter like Geomatrix.

Heavy Metal's shallow gameplay consists of one-on-one battles with an unhealthy emphasis on enormous guns. The expansive 3D arenas range from Egyptian ruins, to a castle, to a run-down stadium, but none are particularly memorable. Muscle-bound cyborgs and top-heavy babes round out the generic roster of fighters.

The battles are a mix of shooting and melee, but the control scheme is very counterintuitive. The ability to jump and hover is somewhat useful, but laying traps seems silly when you consider this is a one-on-one affair. The camera control is seriously lacking, so you often can't tell where the heck you are. Other glitches include CPU opponents who seem intent on running through (and getting stuck inside of) the walls.

The best thing about Heavy Metal's matches is how mercifully short they are. Ironically, the relentless soundtrack is arguably the worst aspect of the entire game. If the awkward camerawork doesn't give you a headache, the non-stop, grinding guitars certainly will. I don't know anyone who has ever enjoyed Heavy Metal Geomatrix, and I doubt I ever will. © Copyright 2006 The Video Game Critic. 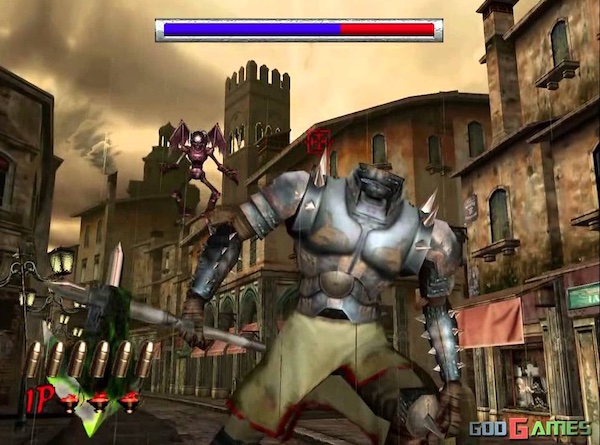 I don't tend to be very opinionated, but I firmly believe House of the Dead 2 (HOTD2) is the greatest light gun game ever conceived. It's pure adrenaline as you blast the limbs off hideous undead while exploring a gothic-looking city inspired by Venice. You can't control your movement directly, but your path branches based on the innocent civilians you save (or don't save). The shooting action is nonstop mayhem. Depending on where you shoot a zombie, an arm may fly off, a huge hole could be blown in his chest, or his head could be blown clean off.

HOTD2 exudes all the cheesiness of a low budget horror flick, complete with pathetic cardboard acting and hilarious dialogue. I absolutely relish lines like "Don't come! Don't come!" "James, go and stop the confusion in the city", and of course the classic "Suffer like G did?" Power-ups and bonus items are revealed by destroying barrels and other containers, so keep an eye out.

I play HOTD2 with friends every Halloween, and we're still discovering new areas and hidden goodies. Grotesque bosses include a headless knight, a hydra, and a "bleeding heart" lizard. The ultimate boss is a white guy decked out in a suit and tie.

In addition to the arcade mode, there's an "original" mode that lets you employ items you've collected in previous missions. An extensive option menu allows you to adjust the number of continues, difficulty, and controller configuration. A normal controller can be used, but I'd highly recommend a light gun.

Two people can play cooperatively, or better yet, one player can go solo holding two guns! Quirky, action-packed, and loaded with unintentional humor, House of the Dead 2 provides the most satisfying light gun shooting action I've experienced. NOTE: Dreamcast light guns don't tend to be very accurate, but it helps to crank up the contrast and brightness of your TV. © Copyright 2006 The Video Game Critic. 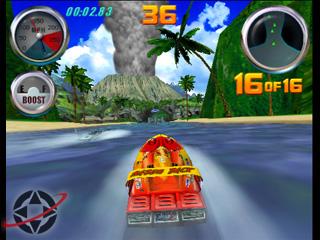 This "launch title" (released on the same day as the system) is my favorite Dreamcast game of all time. Hydro Thunder is pure arcade bliss, with eye candy galore, simple controls and some of the most exhilarating gameplay you'll ever experience in a video game. Imagine an amusement park water ride that moves at the speed of a roller coaster, and you'll start to appreciate what Hydro Thunder has to offer.

This wild racer features 13 power boats and 14 astonishing tracks. From the exotic jungles of the Lost World, to the gigantic ice formations of the Arctic Circle, to the majestic ancient ruins of the Greek Isles, each track is magnificent in scale and full of surprises. Complementing the smooth graphics is a dramatic musical score and some hilarious sound effects.

The intuitive control scheme makes it easy to maintain control even as your boat is careening down rapids at high speeds. Large floating icons provide turbo, and using your turbo power efficiently is key to winning. Numerous ramps allow for plenty of opportunities to catch big air, and your stomach will drop as you go over huge waterfalls, some over 400 feet tall!

A split screen mode allows two players to race head-to-head, and while it's a step down in terms of speed, it's still a lot of fun. Two minor complaints are the lack of a restart option and an automatic save. But all in all Hydro Thunder truly delivers on the promise of the Dreamcast. © Copyright 2004 The Video Game Critic.