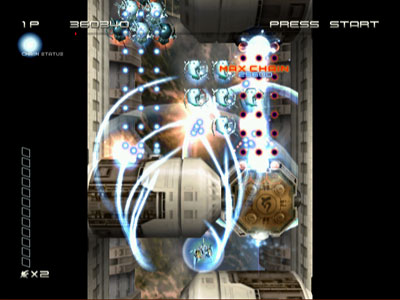 Ikaruga was never released for the Dreamcast in America, much to the consternation of shooter fans. If you've read my GameCube review of this game, you know that I like it a lot. Ikaruga appears to be a generic vertical shooter on the surface, but there's far more to it than meets the eye! Enemies are colored either black or white, and your ship can toggle between black and white "polarity". Firing on an enemy of opposite color inflicts twice the damage. You can actually collect enemy projectiles that match your polarity, using them to fuel a special weapon gauge.

It's more cerebral than your typical shooter, but the system quickly becomes second nature. Once you get a feel for it, you'll be switching polarity on the fly to gain advantage in any situation. The GameCube version of Ikaruga has a few extra modes, but the graphics in this Dreamcast edition look every bit as sharp (if not more so). There are plenty of options including the ability to change screen orientation (horizontal or vertical) and automatically save high scores. Whether you play it on the Dreamcast or GameCube, Ikaruga is a fascinating title all serious shooter fans should have in their collections. © Copyright 2008 The Video Game Critic. 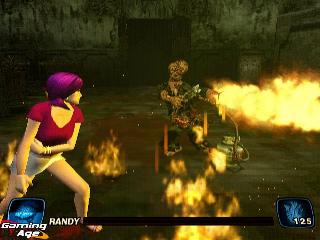 Over the past few years there's been a steady flow of survival horror games, most of which mimic the Resident Evil formula. But Illbleed is a different animal altogether, with truly innovative gameplay and unabashed B-movie storylines. Each of the six stages plays like a low budget horror flick with titles like "The Home Run of Death" and "Revenge of the Worm Queen".

The graphics are only average but the audio really steals the show, with blood-chilling sound effects and remarkably intense music. Illbleed has enough atmosphere to give you nightmares, but the learning curve is pretty steep. While aggressive play is rewarded in most survival games, it won't get you far here. No, you need to progress cautiously in order to detect traps and maintain your health. Staying healthy means moderating your pulse, bleeding, and stamina.

As you slowly explore, an on-screen "horror monitor" helps you detect traps or items. It may sound tedious, but Illbleed is anything but. The game feeds on your sense of paranoia. The tension mounts as you turn each corner or enter a new room. The monster battles are pretty intense and the gore is so over the top that every hit produces a fountain of blood.

The battles reveal the main weakness of the game, which is poor control. The "dodge" move is less than responsive, and sometimes you walk while trying to run. Problems like these aren't as apparent when you're sneaking around but they can lead to some serious frustration when things really heat up. Still, I found myself coming back long after I thought I was through. Illbleed is original, disturbing, and occasionally terrifying. It's a remarkable Dreamcast original that's worth checking out. © Copyright 2001 The Video Game Critic. 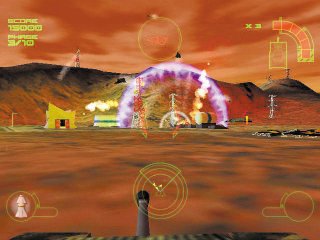 I only bought this game because it was five bucks, and didn't hold much hope for it, but Incoming turned out to be much better than I expected. If you like to blow stuff up, this game is right up your alley. You are faced with a series of missions to blow up invading enemy tanks, aircraft, and ground installations. You play from a first-person perspective, alternating between a turret, helicopter, tank, and a plane.

Basically you just aim and fire your main weapon (which never runs out or overheats) or a secondary weapon (usually a supply of guided missiles). A helpful arrow at the top of the screen always points you to your next target, so there's not much thought required. The vehicles look great, but the hills are rather blocky. The rapid-fire shooting, combined with some nice explosions gives you a feeling of satisfaction.

Although the games tend to be long and repetitive, I never got tired of the gratuitous death and destruction. The aiming controls are a bit sensitive, but the weapons tend to me very forgiving, compensating when you're slighting off. One annoying thing about the helicopter is that your targets tend to move underneath of you (and out of sight), so you need to make multiple passes to finish them off. Incoming also has a nice two player simultaneous mode. It's not particularly deep, but as a mindless shooter, Incoming serves its purpose. © Copyright 2002 The Video Game Critic.