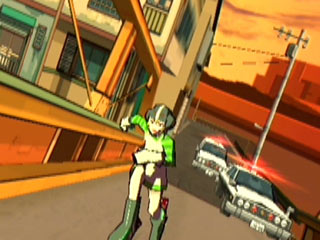 It's not often that a game comes along that's both completely original and fun, but that's Jet Grind Radio. You control a skater who must vandalize certain parts of the city while avoiding the police. The "cell-shaded" cartoon style graphics are unlike anything I've ever seen in a video game, and it looks fantastic.

In addition to the stunning visuals, the fashionable hip-hop music and sound effects really give this game an edge. The controls are simple but effective. Spray-painting involves moving the analog joystick around in the various motions. These motions seem excessive at times, but it's exciting trying to finish your "art" while the cops are heading your way.

One major thing that annoyed me about this game is the camera work. Some levels have cramped areas, and you'll really struggle to get a good angle. And that's no fun when the police are beating you with clubs like Rodney King (I'm not kidding!). Jet Grind is unlike any other game out there. It's far from perfect, but it deserves a look. © Copyright 2001 The Video Game Critic. 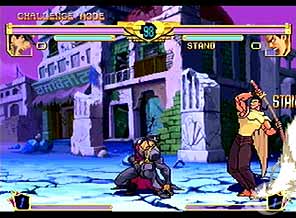 Ten years ago, when 2D fighters were a dime-a-dozen, it was hard to get excited about JoJo's Bizarre Adventure. Its gameplay was hard to grasp, thanks to a "stand" mechanism that's never sufficiently explained. And if you're among the 99% of gamers not familiar with the Japanese comic, the game can feel like an inside joke nobody bothered to let you in on. The manual doesn't bother to explain much of anything.

Judged purely as a 2D fighter however, JoJo's Bizarre Adventure is original, stylish, and visually pleasing. The game has its share of effeminate dudes sashaying around with pink hair and flamboyant outfits, but you can chalk that up to its anime influence. The playable characters also include two hotties, a cowboy, and an aged Indiana Jones. Alessey is the arguably the cheapest of the bunch considering he's armed with a gun! Who brings a gun to a fighting game anyway?!

As an indication of how over the top this game is, you can play as a yapping little dog or a freakin' bird! Most of the characters have a "stand" mode initiated via the A button. Typically this causes an "alter ego" to appear and fight by your side. These entities tend are decidedly weird, and usually assume the form of a ghost, doll, robot, animal, or non-descript shape-shifter. The "stand" gives you new attack options but tends to confuse the action.

With so much frenetic shape-changing, this game is more on par with Darkstalkers than Street Fighter. The action is chaotic but fun, and the moves are undeniably entertaining. As a prime example, the priestess can summon a pink Cadillac to sprout up under your feet (yes, we're talking about a car). The air juggling can be aggravating, but I like how you press multiple buttons to vary the intensity of your special attacks. The backgrounds are unspectacular yet clean and attractive. Even locations like the jail cell, office, and hotel room are aesthetically pleasing.

The story mode has a slick comic-book style presentation, and even boasts a side-scrolling desert stage. High scores are saved to VMU. I'd be lying if I said I "get" JoJo's Bizarre Adventure, because it really doesn't make sense to me on any level. Still, it's one of the more interesting fighting games I've played in some time. And with 2D fighters becoming such a rare commodity as of late, this unorthodox title is looking better all the time. © Copyright 2010 The Video Game Critic.