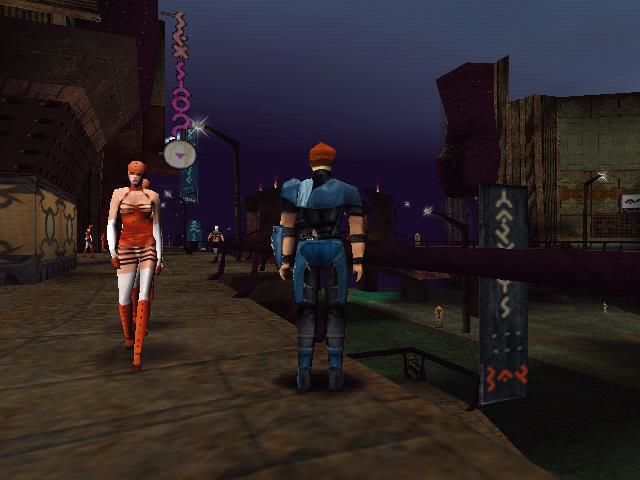 Ever on the cutting edge, David Bowie contributed the fine soundtrack to this futuristic adventure. In Omikron you are a cop in a dystopian city investigating the disappearance of your partner. Everybody you know including your wife is acting suspicious and you don't know who to trust. The remarkable atmosphere of the game owes much to Blade Runner with its overcast weather, glowing advertisements, floating cars, streetwalkers, and steam vents. Ominous police robots resemble ED-209 from Robocop, and it's startling when they snap to attention.

The game captivated me as I walked the streets, explored my apartment, collected items, and conversed with characters. I was able to visit a red light district and watch a virtual David Bowie perform one of his songs. Omikron's well-designed menu system lets you manage inventory and transfer items to virtual lockers for safekeeping. It's super convenient to call "sliders" (taxis) and the game even simulates traffic.

Omikron is ambitious in scope but technically deficient. The controls feel stiff and it's difficult to walk straight. Frequent disc accesses cause the animation to freeze and stutter. Once I actually became embedded in a door. An action button is used to interact with the environment, but most of the time it just displays "I don't understand" or something to that effect. In the police station it's hard to discern doors from random designs, so you end up pushing against walls hoping a panel will slide open.

The one-on-one fights feel like a low-budget Virtual Fighter, and the first-person shooting mode made me feel queasy. After a few hours my progress hit a wall and I reluctantly gave up on the game. The most compelling aspect of Omikron is David Bowie's artistic, otherworldly soundtrack. He wrote some truly beautiful songs for the game which can also be heard on his Hours album. If you're a fan like me, seeing a legend like David Bowie resurrected in digital form is a surreal, bittersweet experience. © Copyright 2016 The Video Game Critic. 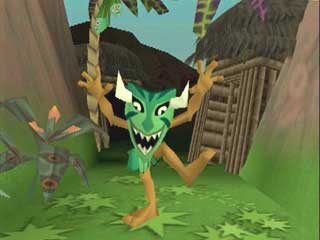 Several years back a Playstation game called Poy Poy was released to little fanfare, and it turned out to be one of the greatest multiplayer video games ever made. Four characters ran around a single screen, hurling boxes and bombs at each other, and my friends and I played the hell out of it. Ooga Booga tries to do the same thing, but the gameplay is deeper and played on a split screen.

The characters are goofy witchdoctors on exotic islands, and there are four types to choose from: the speedy "Twitchy", the obese "Fatty", the ghost-like "Hoodoo", and the curvaceous "Hottie". You can smack each other around, throw "shrunken heads", and cast spells like fireballs, lighting, and tornados. Wild animals like boars and birds add to the fun, allowing you to ram the other players or bomb them from the air.

The "tribal trial" mode allows one person to open up all of the islands, spells, and game types. Although it's a great intro to the game, it feels like work after a while, since ALL the game elements are locked initially (I hate that!). But Ooga Booga was really designed for multi-player action. Up to four players can compete via split screen, or you can battle online.

Some of my friends complained about the limited split screen view, but we still had a blast, sometimes laughing hysterically. It's true that the small screen makes it difficult to locate enemies and aim weapons, but I've heard that the online mode is much better. Other game variations include a "Boar Polo" sports variation, but it's surprisingly bad. Ooga Booga has simple graphics but loads of personality. It's not a classic, but if you enjoy multiplayer mayhem, give it a shot. © Copyright 2002 The Video Game Critic. 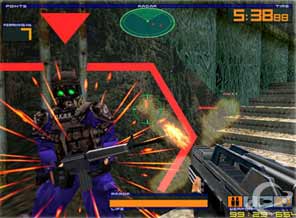 Do you like first-person shooters, but get tired of long, drawn-out missions? Outtrigger provides the same kind of thrills, but the missions are shorter and more arcade-like. Although some require you to collect items or guard a hostage, most missions simply require you to kill a certain number of terrorists within a minute or two. You view the action from behind your character, which gives you a good sense of your surroundings and lets you easily dodge incoming missiles.

The action is fast and chaotic, but the framerate is able to keep up just fine. The controls are awkward, mainly due to the layout of the Dreamcast controller. The digital control is used to move your character, and the analog stick is used to rotate sideways or up and down. Right away you'll notice a problem - since the Dreamcast controller puts both directional controls on the left side of the controller, you often have to switch back and forth between the two.

This game would have been far better suited to dual analog sticks. I could never really get used to aiming up and down. Other buttons let you fire, jump, and switch weapons. Weapons include machine guns, rocket launchers, flamethrowers, grenades, guided missiles, and bouncing photon torpedoes. Just be sure not to use the rocket launcher in close quarters.

The multi-tiered stages are fairly small, and power-ups are all over the place. The single player mode challenges you to an increasingly difficult series of short missions. I don't know about the network mode, but my friends hated the split-screen mode. It's played from the first person perspective, and it's very hard to tell what's happening. Trigger-happy arcade fans might appreciate Outtrigger, but overall it's just average. . © Copyright 2002 The Video Game Critic.