From 1978-1983 the Odyssey 2 console existed largely in the shadow of the Atari 2600 and Intellivision. Despite what its membrane keyboard would suggest however the Odyssey 2 was a nifty system with a lot of fun games. They came packaged in small glossy black boxes with gold trim. Attractive and unique, they are favored by retro game collectors like myself.

The Odyssey 2 artwork has a distinctive futuristic vibe with a dark backdrop that adds a sense of mystique. I don't own the boxes for all of my games but I do have quite a few. What better way to show them off but to put together a special page like this? Here you'll find scans I made of the ones I find particularly interesting. I also scanned the back of each box and included some witty commentary. You can click on any photo for more detail. Enjoy! 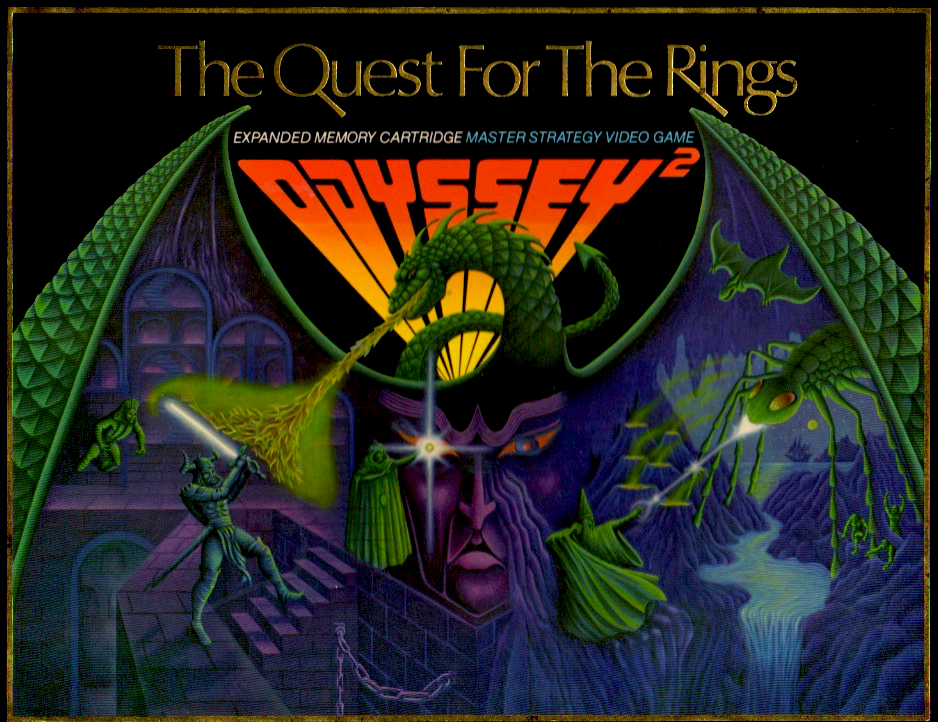 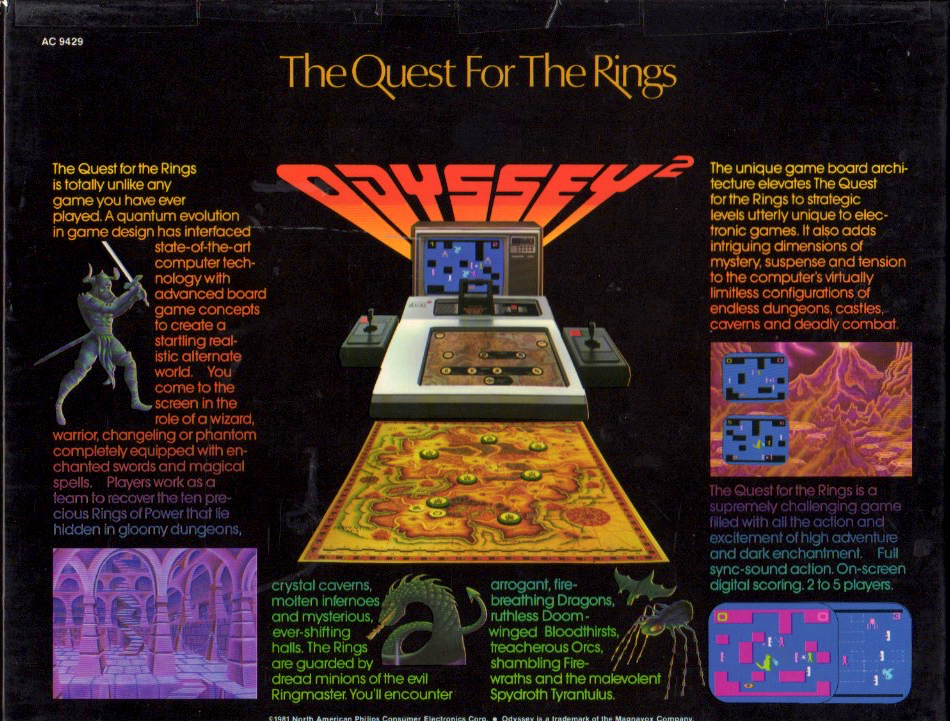 I'm cutting to the chase with perhaps the most impressive box in the Odyssey 2 line. The Quest for the Rings was an ambitious video game/board game hybrid, packaged in an oversized box that included a large manual, board, and many tiny plastic pieces. The artwork is pretty fantastic, capturing so many elements of a D&D-style adventure with an ominous green dragon presiding over it all. On the back of the box colorful text added to the intrigue, although the screenshots were conspicuously small.

Read my review for Quest For The Rings 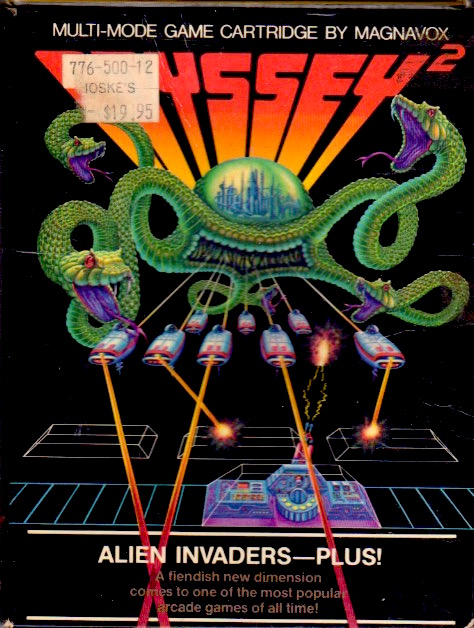 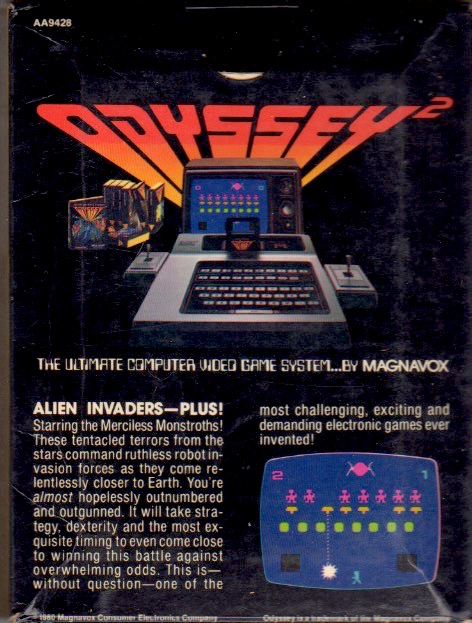 This Space Invaders clone may boast the most badass Odyssey 2 artwork of them all. It features an octopus-like "mother ship" extruding four scary-looking snakes as tentacles. There appears to be a complete city in its domed head and an armada of laser-firing ships below. Who could stand a chance against this juggernaut?

Read my review for Alien Invaders - Plus! 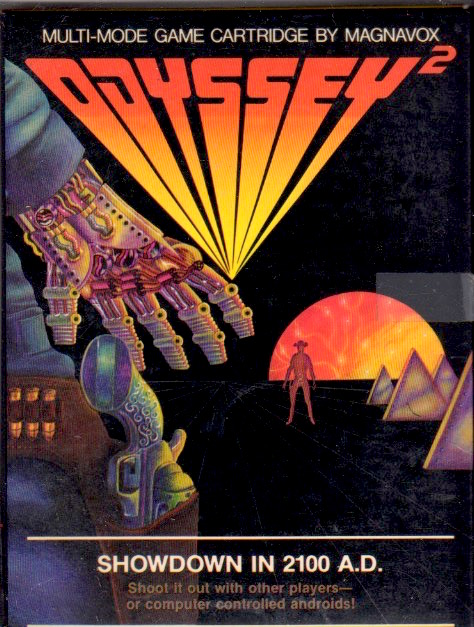 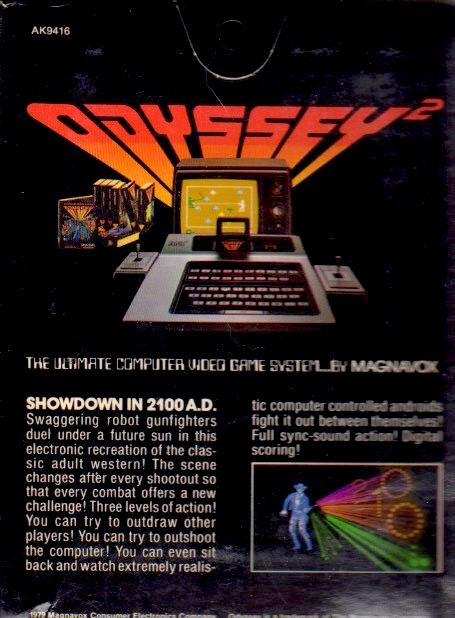 Every classic video system has the obligatory one-on-one cowboy shooter, but the Odyssey 2 added a futuristic spin. While the cowboy in the distance appears to be human, the hand reaching for the gun in the foreground is clearly cybernetic! That poor human has no idea what he's up against! One thing I don't like are those pyramids on the right, which appear to be about four feet tall. The back of the box includes a truly bizarre screenshot that looks nothing like the actual game. It shows a cowboy firing numbers out of his gun, as if this were some sort of educational title (*shudder*).

Read my review for Showdown in 2100 AD 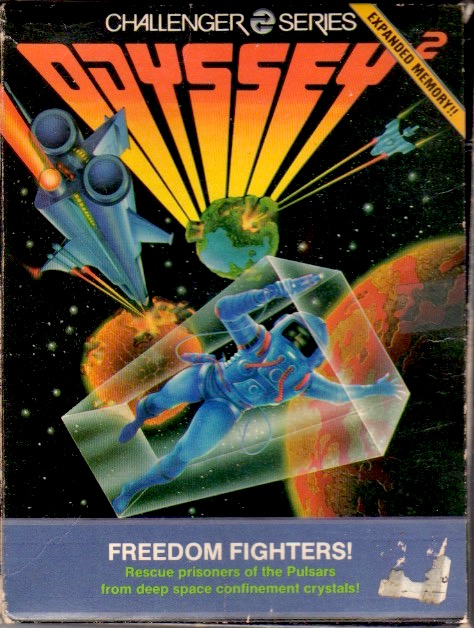 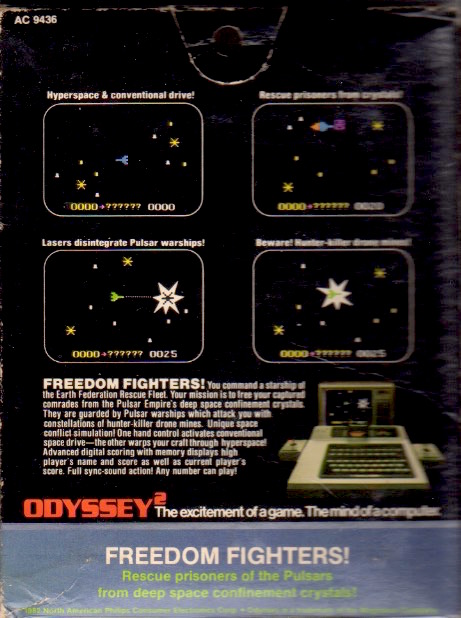 This artwork illustrates just how powerful the starships are in this game. The one in the distance is blasting out an entire chunk of the Earth with a single shot! I like how that astronaut is trapped in glass. It kind of reminds me of the villains in Superman getting encased in that shard at the end of the first film. Apparently that type of thing happens all the time in the space world so I guess we'd better get used to it.

Read my review for Freedom Fighters 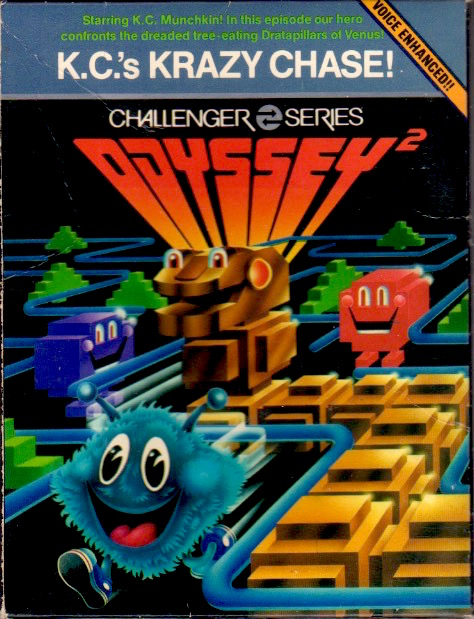 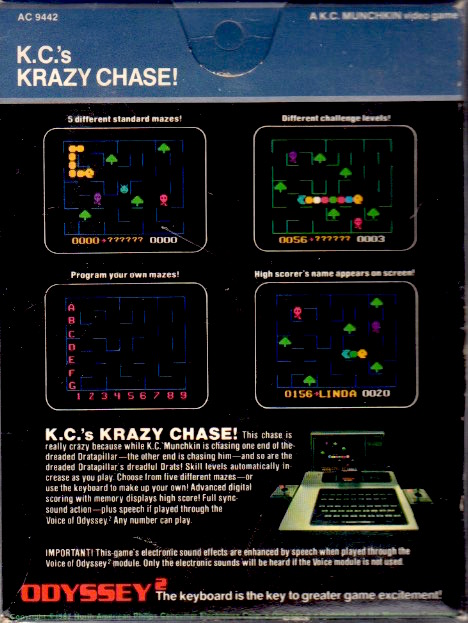 This box art here isn't much different from the box of its predecessor, K.C. Munchkin, but this has a decidedly 3D look. The screenshots on the back belie that image, much to the disappointment of countless children in 1982 (okay, maybe a dozen). I do like the frenetic look of this illustration, with colorful creatures zipping around all over the place. I wonder how the blue creature in front puts on his sneakers in the morning? 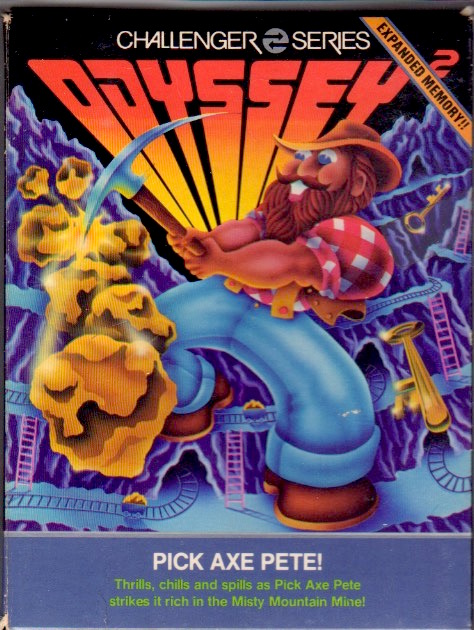 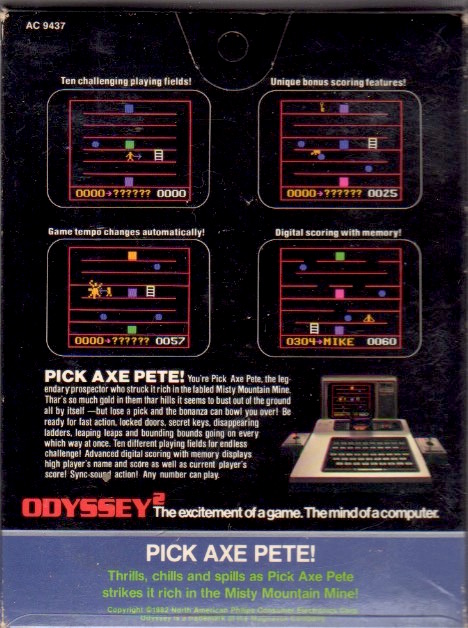 Pick Axe Pete is of the most beloved Odyssey 2 titles and its box art is nothing to sneeze at. You got this big lumberjack-looking dude hacking away at some rocks with ladders and keys all over the place. I find it interesting how the back of the box says "any number can play". So I can have 27 people over and we can all play at once? Can't wait to try! 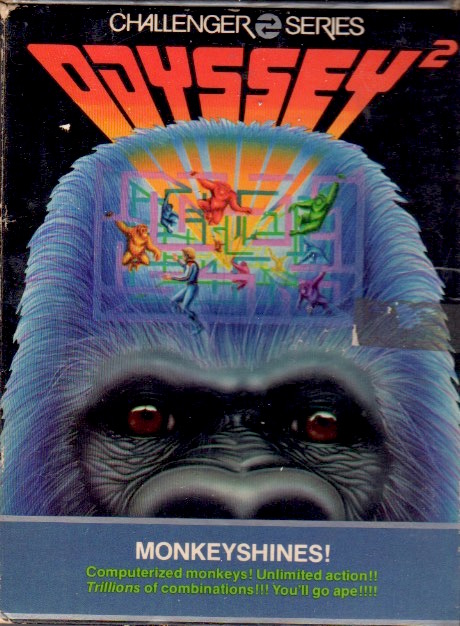 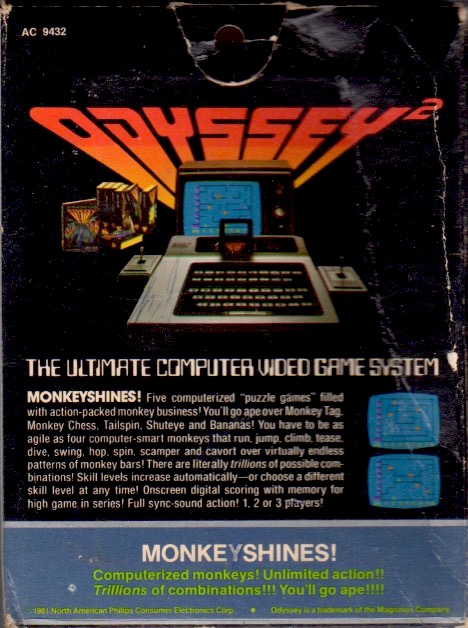 Yikes! There's something extremely ominous about this picture. That gorilla looks real, and he's staring right at me! Worse yet, I can see what he's thinking, and it's not good. He's fantasizing about a bunch of monkeys terrorizing some poor chump who looks vaguely like me! Very unsettling. I like how the description on the back says "full sync-sound action". Are you telling me when I do something on the screen it makes a noise? These computers are magic.

Read my review for Monkeyshines 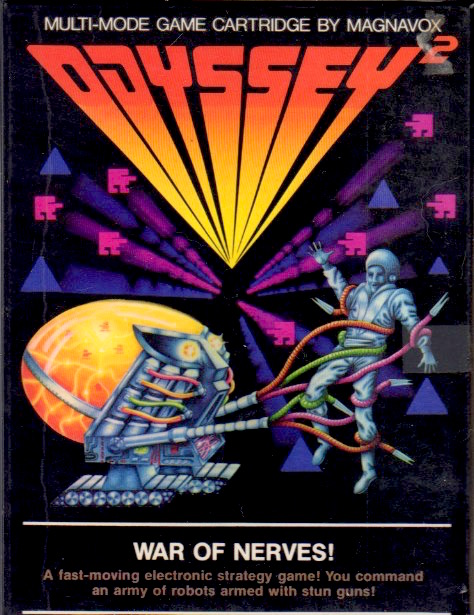 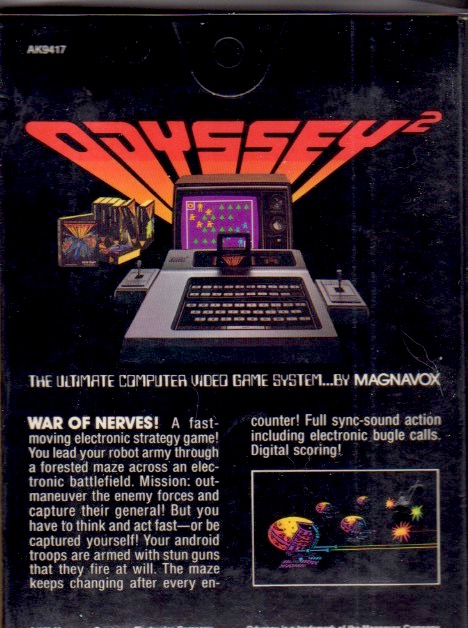 This is one of my more recent acquisitions. War of Nerves is a real-time strategy game (!) between two armies that lets you direct robot soldiers to some degree. The cover shows a robot entangling some space guy in its tentacles, about to rip him limb from limb no doubt. It's a little deceptive because the robots in the game assume that generic human shape. Also, there are no fatalities that I'm aware of. The screenshot on the back is a total scam, showing some oversized egg-shaped robots that have absolutely nothing to do with this game. I'm all for artistic interpretation, but c'mon now. 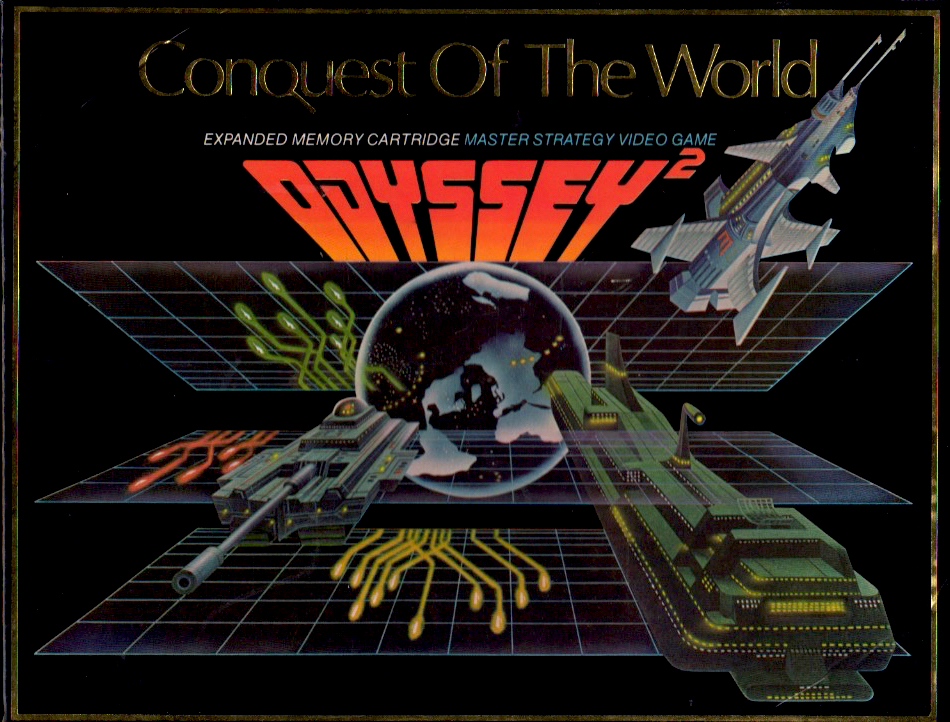 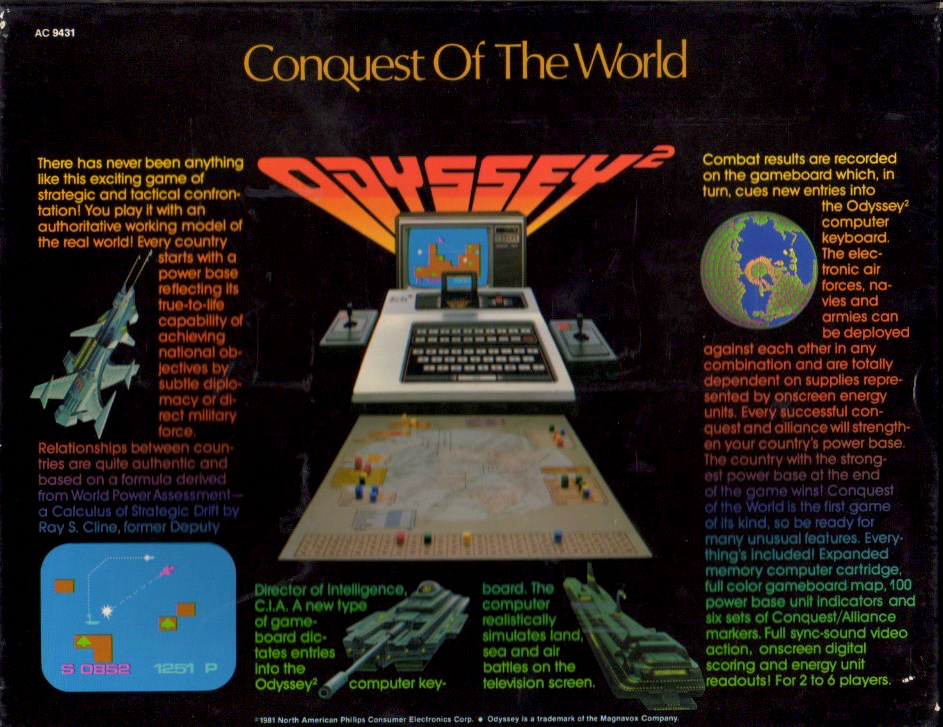 While less interesting than The Quest For The Rings, Conquest of the World is my other "big box" game so I figured it would be a fitting way to bookend this feature. Another boardgame hybrid, Conquest is very complicated which is probably why I have yet to review it (hangs head in shame). Still, the front of the box is pretty cool. Three planes give the image a sense of depth. There are several futuristic vehicles including a tank, ship, and jet. Filling in the gaps are some colorful circuits. I really need to get around to playing this.
Wasn't that interesting?