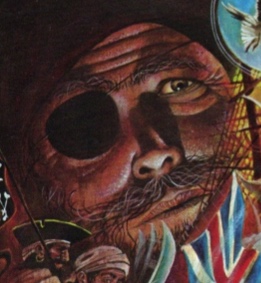 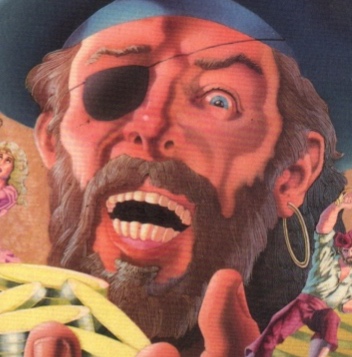 While recently perusing my shelves I stumbled upon Flag Capture for the Atari 2600. It's an obscure title but I had to marvel at its artwork. The image on the box sent my imagination in overdrive, fueling a thirst for danger, excitement, and adventure on the high seas!

Since August is offically pirate season (source: me) I began scouring my collection for other pirate-related images I might use for a new box art special. While pouring over dozens of pirate games I was amazed how lame most of them were. Many had little more than a stylized rendition of the skull and crossbones on their cover.

I kept digging however and eventually struck enough gold to justify this seasonal page. So splice the mainbrace, hoist the mizzen, batten down the hatches, and enjoy this tribute to game art of the swashbuckling sort! 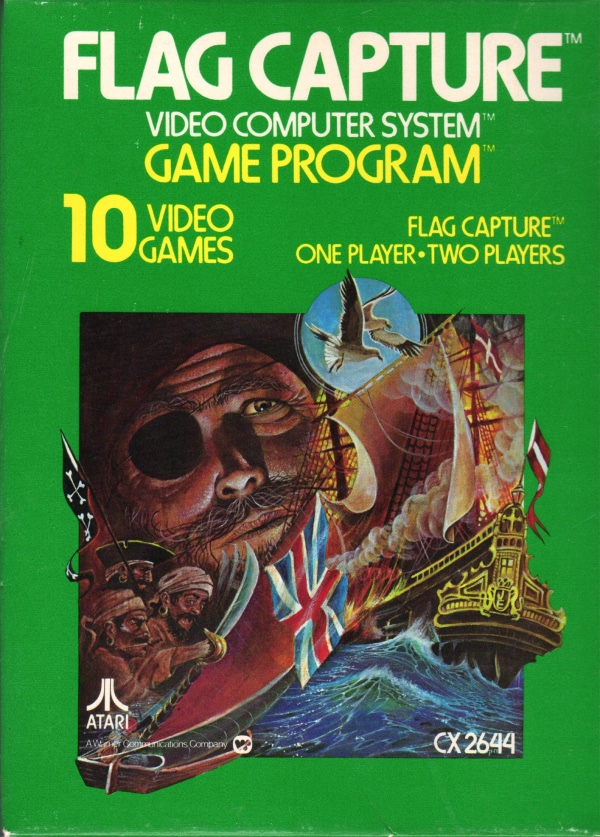 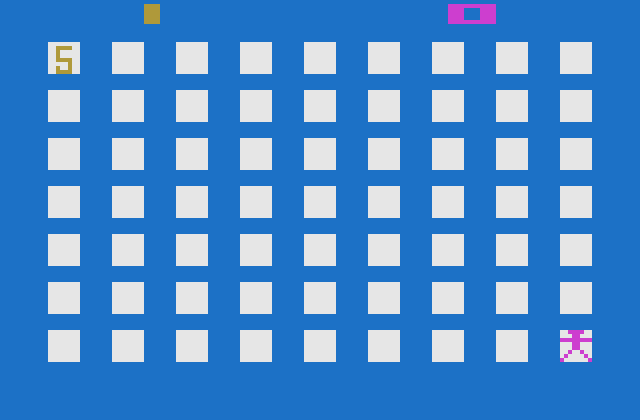 The people running the original Atari corporation were masters of advertising, tantalizing customers with lavish artwork that made even most primitive games seem positively epic. They really pulled out the stops for Flag Capture. What a visual feast! I don't even know what I'm looking at but I can't get enough of it!

It's difficult to find any connection between the artwork and the game itself, but that's besides the point. This artwork makes me want to play Flag Capture really, really bad. You got me Atari. Damn you! 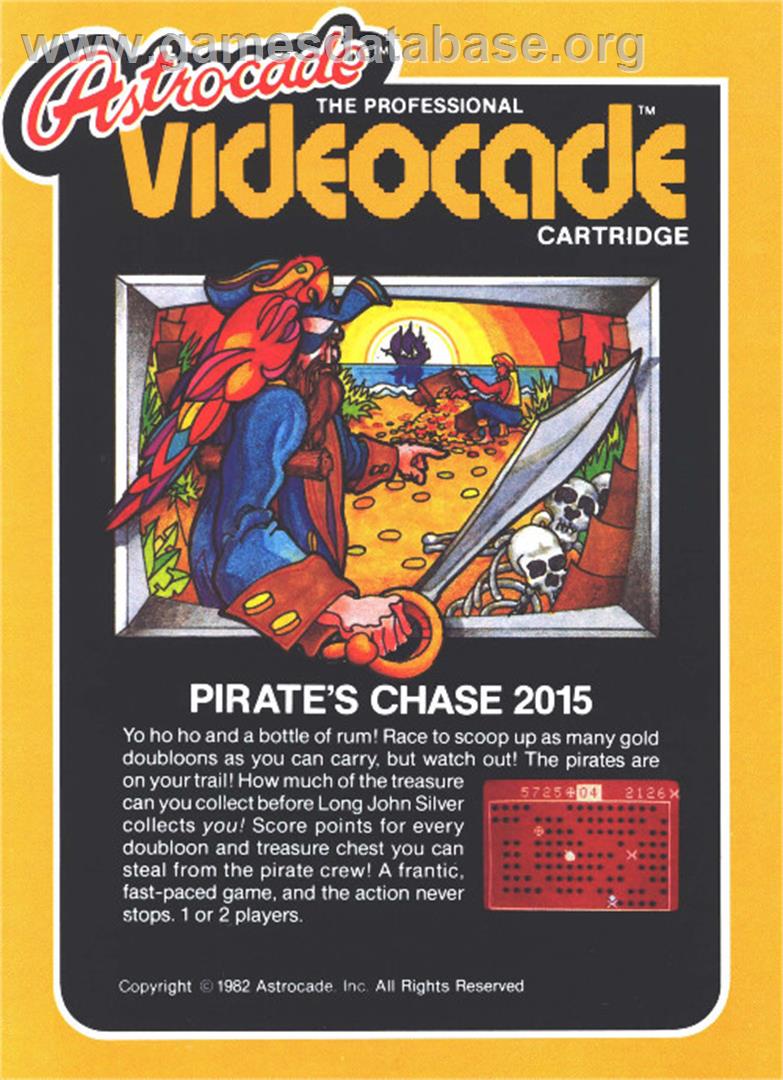 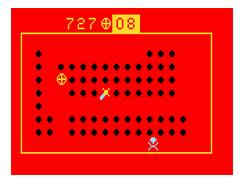 When it came to packaging Bally Astrocade games were the worst and frankly it's not even close. The boxes were nothing more than a generic gold box with the manual shrinkwrapped to the front, doing double duty as a box cover! How much money did Bally save by doing that? Not nearly as much as they lost, I'll tell you that much.

I do appreciate the vivid image on the manual of Pirate's Chase. Keep in mind that "2015" is not a reference to a year but was in fact part of Bally's bizarre game numbering system. The colorful picture manages to tick off a ton of pirate checkboxes. There's a parrot, sword, skeleton, treasure, chest, ship, eye patch... I thought the thing under his arm was a treasure map, but an astute reader pointed out it was a crutch in reference to the classic pirate of Robert Louis Stevenson's Treasure Island, Long John Silver. 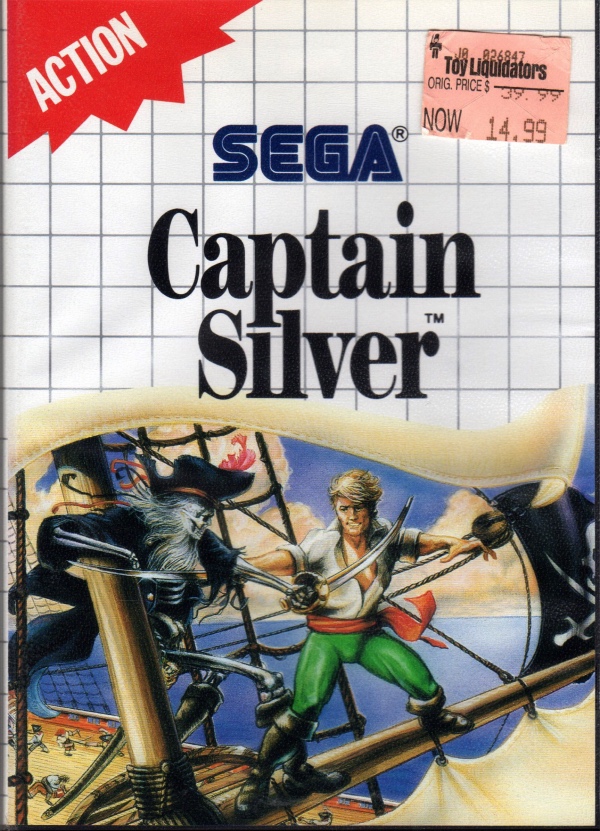 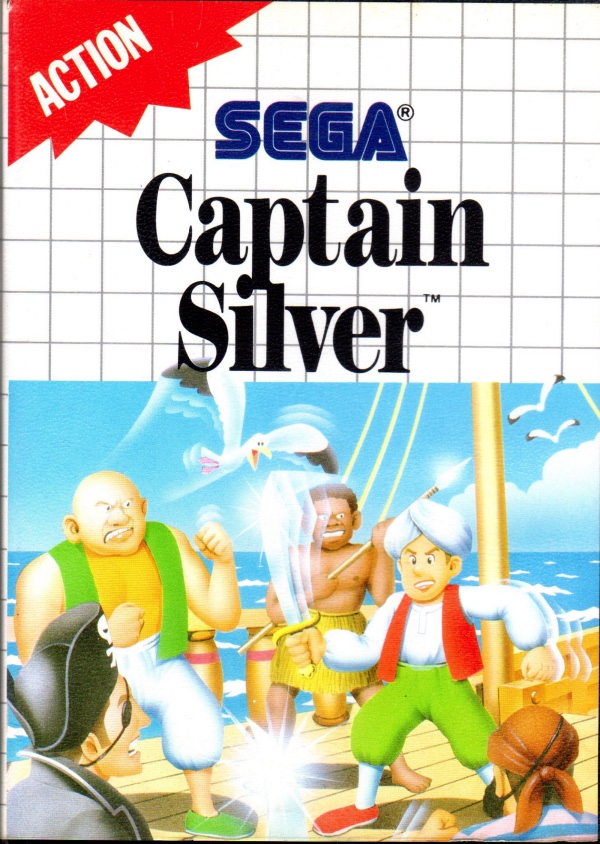 Captain Silver is one of the most beloved titles for the Sega Master System. It's a ton of fun and you won't find it on any other console.

It's interesting to note however the European and US versions of the game vary to a substantial degree. The European version contains more content and has a higher level of difficulty.

Europe got the short end of the stick when it came to box art however. The US version is on the left, and the European on the right. Which would you rather play? Oh yeah - still the European version. Damn. 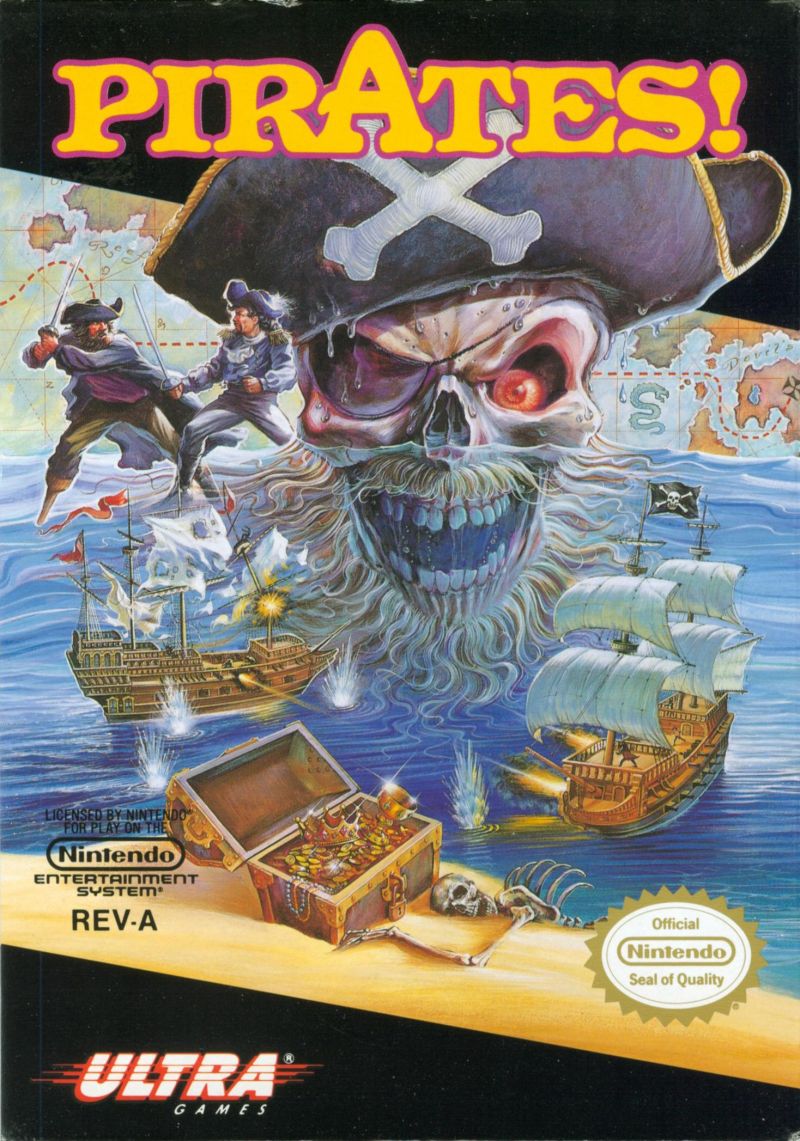 Gotta love this one. The skeleton pirate in the center is scary as hell, with that red eyeball just floating in the socket! He's rising from the depths like Davy Jones himself!

You also got sword fighting, ship battles, and a navigational map. Looks like the poor fellow at the bottom of the screen discovered buried treasure but never got a chance to enjoy it. I think there's a lesson for all of us in there somewhere. Maybe not. 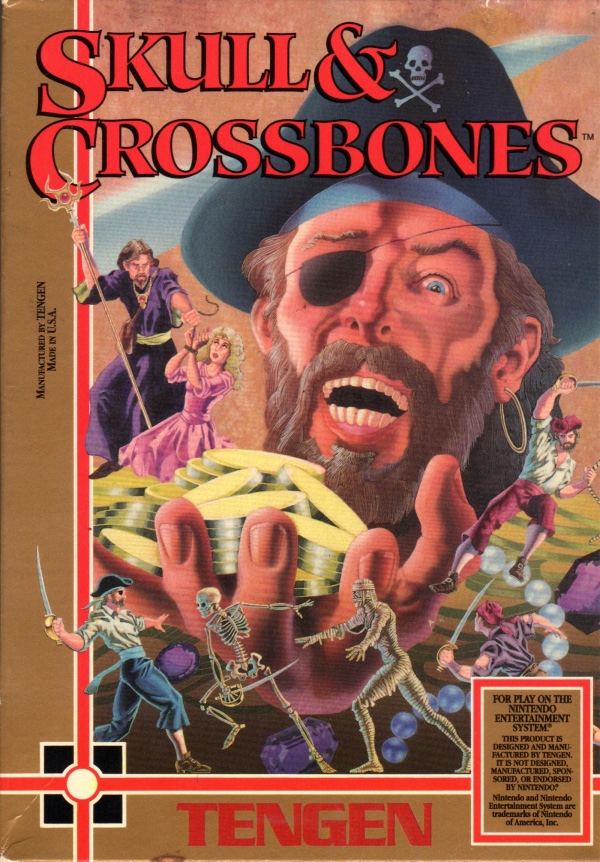 This cover has a heck of a lot going on. The pirate is the center is delirious with joy running his fingers through all that gold. Wouldn't you be?

The pirate at the bottom is fighting not only a sketeton but a mummy too! An evil mage on the left has captured a fair maiden. This may be the most realistic depiction of the pirate era to date. 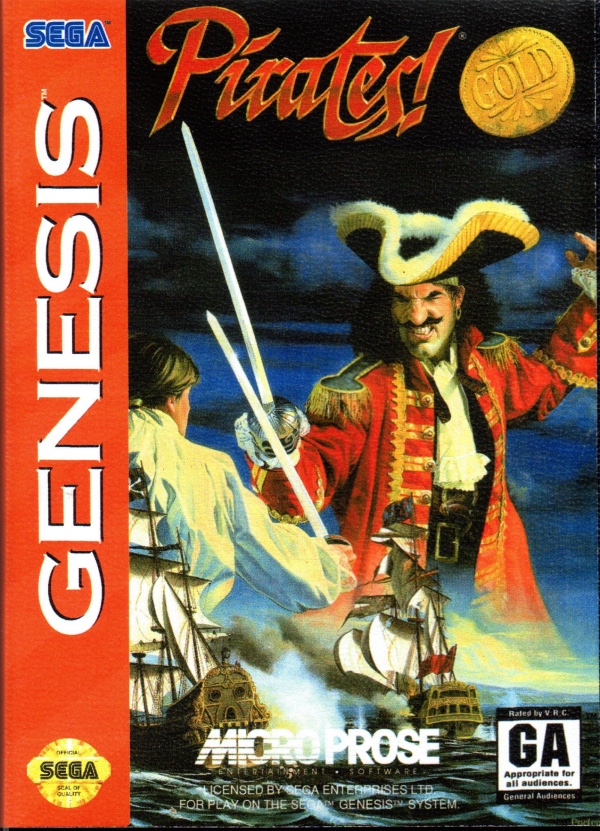 This cover has a painted illustration quality that's appealing, but calling it a cliche might be an understatement. Was this picture ripped out of a Peter Pan storybook? Tinkerbell has to be in there somewhere.

You'd think reputable company like Microprose would try to be a little more historically accurate, but hey - they needed to sell games and the console crowd tends to be a bit less discerning than the computer guys.

Secret of Monkey Island, The 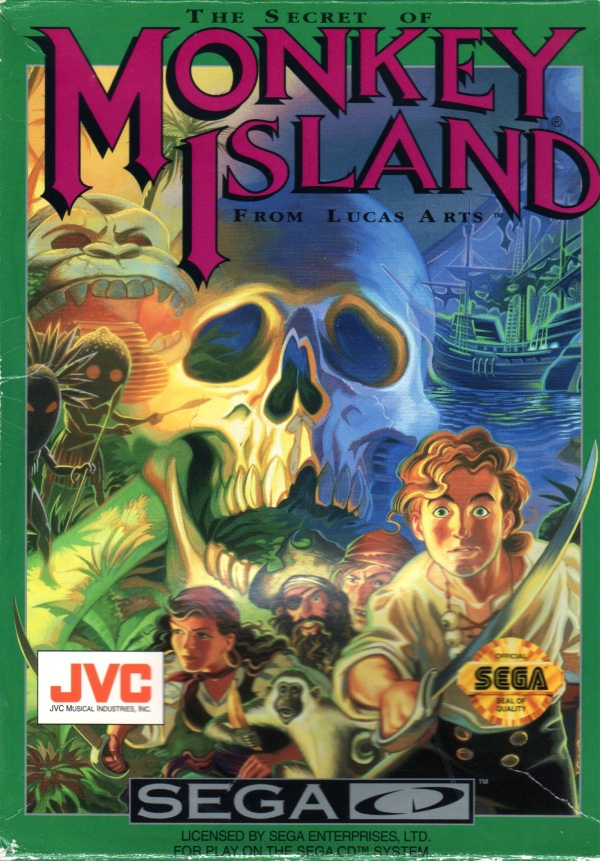 Okay now we're talking! Monkey Island is a legendary point-and-click adventure series conceived of by LucasArts when they were still on the forefront of the software industry.

The imagery presented here is pretty fantastic. You have four adventurers in the foreground, exotic locations in the background, and an ominous skull looming over it all. There's even a monkey for crying out loud! This image is captivating and haunting too. 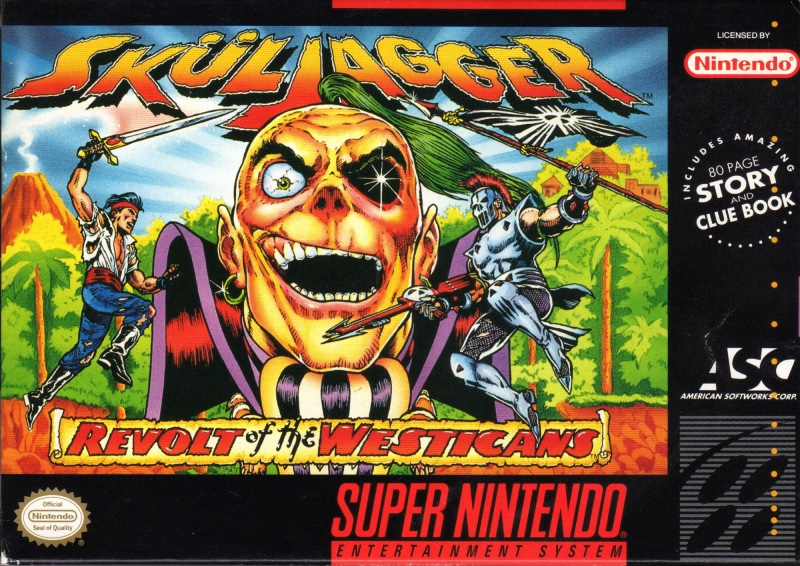 This art has more of a comic book style. The dude on this cover doesn't look like someone you'd want to run into in a dark alley. The two guys fighting really give the cover a swashbuckling vibe, and I love the bright jungle scenery.
Find Skuljagger on eBay, Amazon, YouTube
Read full review for Skuljagger 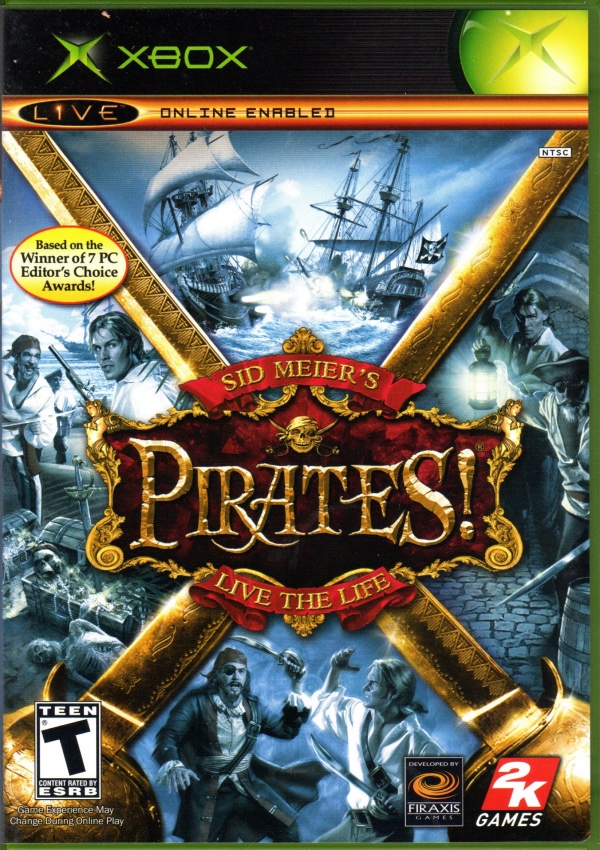 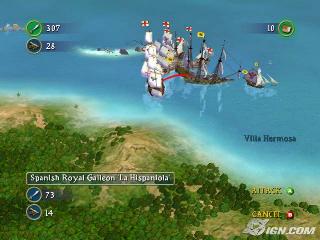 This elaborate cover embodies so many aspects of the pirate mystique. You got sea battles on the top, hand-to-hand combat on the bottom, treasure pillaging on the left, and exploration on the right. The classy color scheme contrasts the blue of the ocean with the sparkling gold.
Find Sid Meier's Pirates on eBay, Amazon, YouTube
Read full review for Sid Meier's Pirates 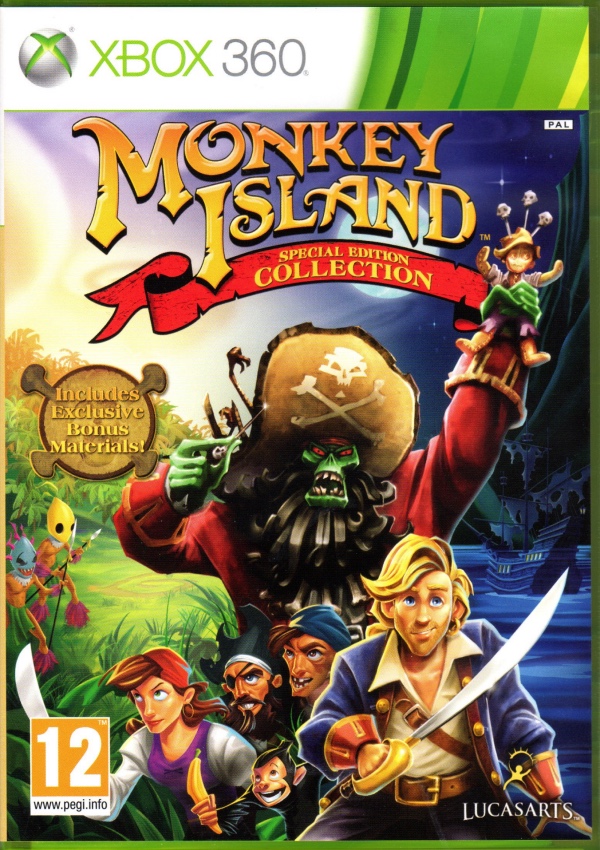 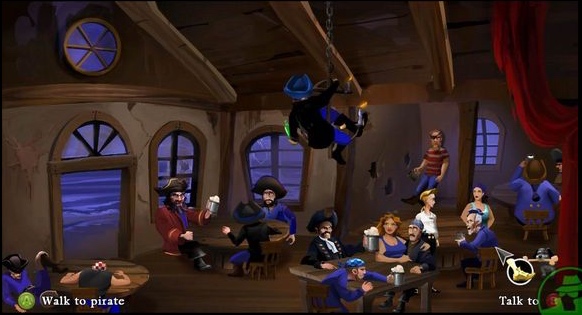 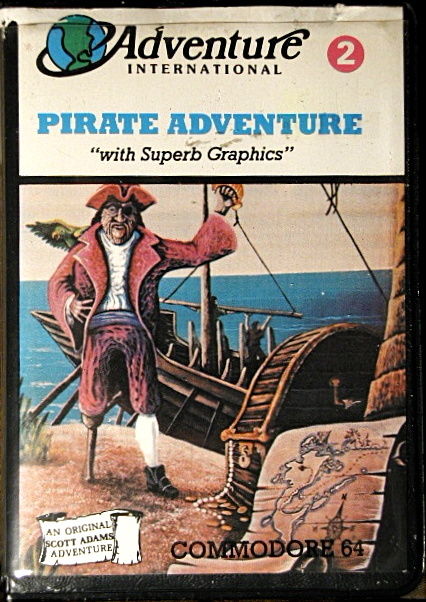 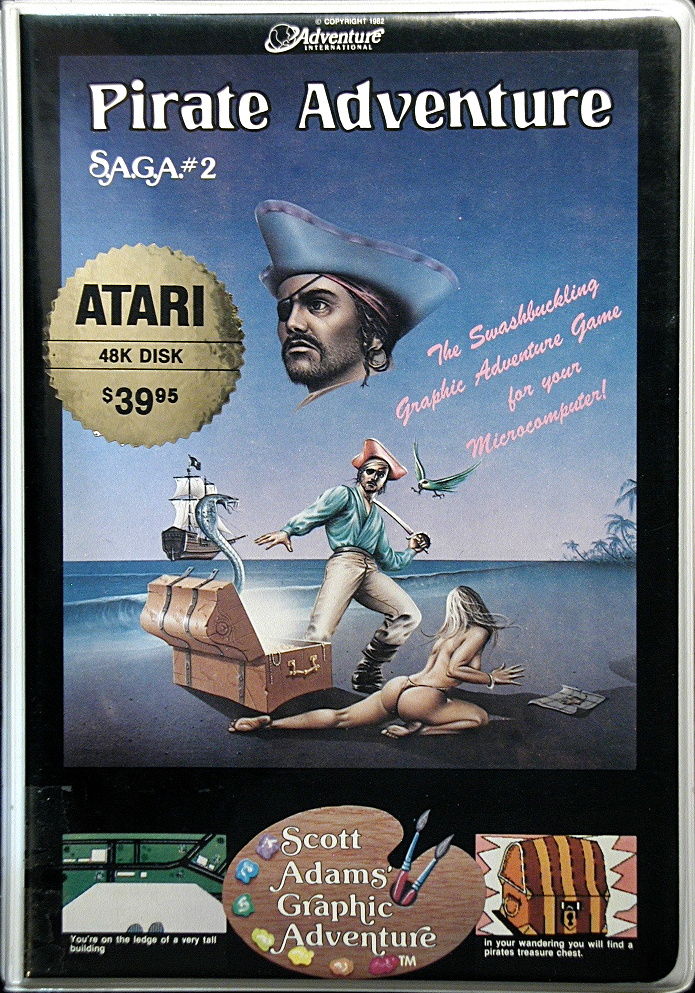 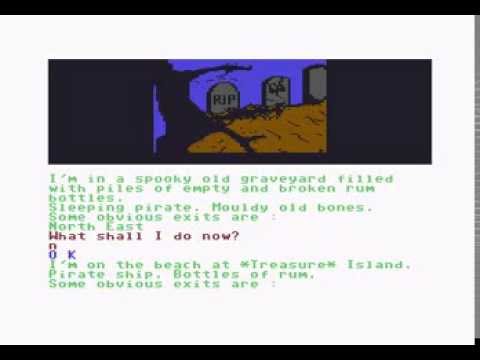 C64 Critic: The pirate on the cover of the C64 version (left) looks like he regrets every life decision he ever made, a veritable poster child for "Kids, don't turn out like me...", whereas the one on the right looks like the dude is about to soak in a treasure-chest shaped hot tub full of gold coins before having his way with a supermodel in a thong bikini.

One of those boxes actually make me want to buy the game. The other makes me want to stay in school and study hard. Talk about two different marketing approaches!