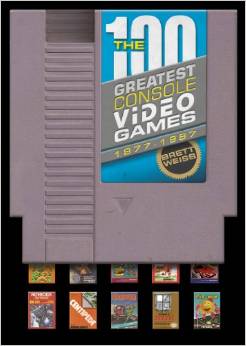 The cover of 100 Greatest Console Video Games: 1977-1987 is designed to look like a giant NES cartridge. What gamer can possibly resist? The book covers the video game industry during its most formative years, when revolutionary new titles were released on a monthly basis (literally). Author Brett Weiss knows his stuff. A respected name in the classic gaming community, Brett is a prolific writer and collector. The book clocks in at 242 pages, so you feel like you're getting your money's worth. It's hard to walk past this without picking it up and reading a few chapters. Crack it open and you immediately notice the inseam is plastered with vintage comics packaged from old Atari games. This is not a stuffy textbook; this is all about fun.

1977-1987 might seem like a rather arbitrary timeframe. It is not. 1977 was the year video game consoles were first ushered into our homes, and companies like Atari and Intellivision were about to become household names. After years of unbridled growth the industry suffered a "crash" in 1983, which some short-sighted "experts" interpreted as the end of the video game craze. Not a chance. Nintendo came to the rescue with its phenomenal NES system, and the book covers that as well.

The 100 games hand-picked for the book are heavily influenced by the author's personal experiences. They span a wide range of systems including the Atari 2600/5200/7800, Intellivision, Colecovision, Odyssey 2, Sega Master System, and NES. Some of the more obscure systems include the Arcadia 2001 and Vectrex. Designed with playability in mind, the games transcend the limited graphical capabilities of their time and to this day continue to be enjoyable to play.

The titles include plenty of "usual suspects" like Donkey Kong, Frogger, Asteroids, Pac-Man, Zelda, and Castlevania. But there are also surprises and hidden gems like Fortress of Narzod, Food Fight, Diner, Arctic Adventure, and Pick Axe Pete. Heck, I had never even heard of Balloon Fight. The fact that these selections are subjective makes the book a more interesting read. The games are presented in alphabetical order, so at least the author got off-the-hook from having to order them (which would have been a daunting task).

Each title is allocated two to four pages. Brett typically begins with a detailed explanation of mechanics of the game, which is useful considering the reader may have never played (or even seen) the game. Brett often shares anecdotes about his personal experiences with the title, and I like his easy-to-read, matter-of-fact style. In many cases he provides insightful behind-the-scenes information - sometimes from the original programmer himself. The last few paragraphs are usually dedicated to quotes and observations from vintage periodicals and modern web sites. You can expect many pearls of wisdom from The Video Game Critic, although seeing my own words in print is a little scary (for me, but hopefully not for you).

I really like the inclusion of artwork from manuals, labels, and arcade cabinets. During this particular era companies like Atari embellished their games with gorgeous illustrations. While these often belied the actual contents of the game, the pictures were fun and stimulated the player's imagination. Each chapter is peppered with colorful images of screenshots, packaging, cartridges, and manuals. This brings me to my one criticism of the book. Most games only include one screenshot (at most), and the images really could have been bigger. There were times when I felt a magnifying glass would come in handy.

The book is suitable for just about any type of video game fan. Those new to gaming will understand how each title pushed the envelope and generated a sense of excitement. Seasoned gamers will relish the behind-the-scenes details and quotes from magazines published back in the early 80's. Together the reviews paint a full picture of how the industry evolved. The book offers a wide range of opinions and perspectives, including some dissenting viewpoints.

Perhaps the best part about the The 100 Greatest Console Video Games: 1977-1987 is that you don't need to be an avid reader to enjoy it. I personally gravitate toward books that are easy-to-read with lots of pictures, so this is right up my alley. Since each article is brief and to-the-point, it's easy to pick the book up and just read an article or two at a time. Of course, once you start it can be hard to stop, but I guess that's the whole point.

Find 100 greatest console video games 1977-1987 on Amazon
Copyright 1999-2020 The Video Game Critic.  The reviews presented on this site are intellectual property and are copyrighted. Any reproduction without the expressed written consent of the author is strictly prohibited. Anyone reproducing the site's copyrighted material improperly can be prosecuted in a court of law. Please report any instances of infringement to the site administrator.