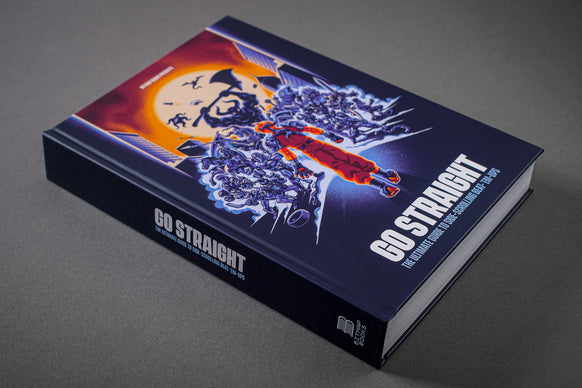 When this book was delivered to my house I thought it was a box with a freaking cinder block inside. This is literally the largest, heaviest book I've ever owned. I love it. It may not be the longest but its 490 pages are printed on the heaviest, glossiest, highest-quality stock available. The hard cover and stylized artwork calls to mind those classic Dungeon and Dragon reference guides of the 1980's. The title Go Straight may seem a little odd until you learn it the name of the musical theme for Streets of Rage 2, composed by the legendary Yuzo Koshino.

Had I not known better I would have assumed this book was written expressly for me. I've been a fighting game junkie since playing Double Dragon II on my Atari ST computer. My wife and I played Streets of Rage regularly while we were dating. Hell, I may be overqualified to review this book! Over the decades I've attempted to acquire every beat-em-up on physical media, and have been pleased to witness a modest revival of the genre in recent years.

Go Straight's two-page introduction is short but sweet, printed across a blown-up image of that gorgeous iconic skyline from the original Streets of Rage. I savor every pixel of that thing! As the intro explains, the side-scrolling beat-em-up genre has gone through its share of ups and downs since the 1980's, peaking in the early 90's before going nearly extinct later in the decade. But while major publishers like Sega and Capcom have forsaken the genre, independent studios have picked up the torch to help reinvigorate the classic formula. 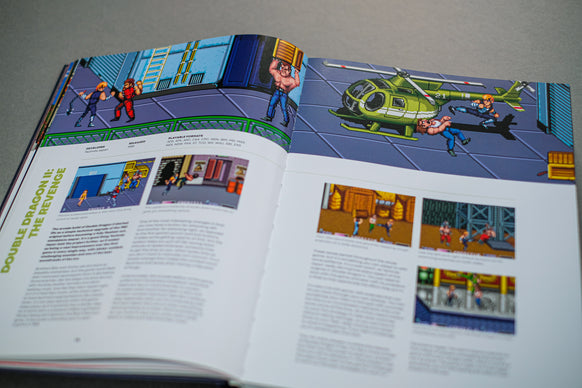 This book details hundreds of games in chronological order, breaking them down by decade. As I mentioned before, the paper quality is outstanding, with each page being about three times as thick as a typical book page. Most games are presented over a one or two-page spread with multiple screenshots, some of which are very large. The developer, release date, and playable formats are also specified. Formats are listed as acronyms, some of which are not self-evident. Cryptic letters combinations ARC (arcade), ZXS (Spectrum), and AMI (Amiga) will have you referencing the key.

Each game includes a review that typically runs several paragraphs. Author Dave Cook does a fine job of providing a high-level description of each game while highlighting its unique features, quirks, and cultural significance. There are also frequent references to other games in the book, neatly tying everything together. The author's style is actually quite similar to mine, although he's much less critical. He manages to find redeeming qualities and silver linings in all but the very worst titles.

The book also contains numerous fold-outs as well. They're not just for centerfold models anymore! Editor's Note: Inappropriate! Certain pages open up to expansive four-page spreads highlighting interesting elements of significant games. For example, the fold-out for Altered Beast examines all the enemies in the game. The one for Final Fight dissects its world map, and in the case of Combatribes you get to savor panoramic views of all of its stages. 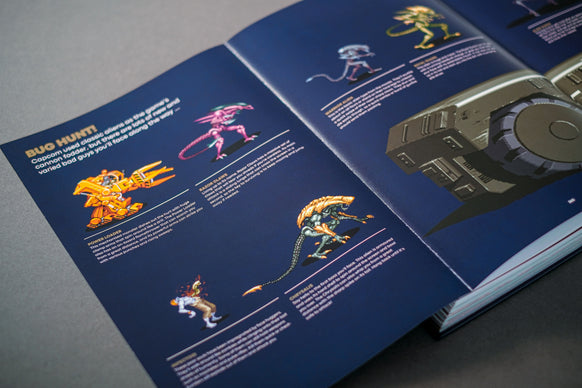 Go Straight features over 200 games spanning 37 years, but it's worth noting the author did expand the definition of your traditional 2D side-scrolling brawler. A few titles like Rastan are the kinds of games I would probably place in the platforming genre. In addition, a number of 3D games are included such as Fighting Force, Die Hard Arcade, and The Bouncer. Considering these games contain all the essential elements, it makes sense.

Despite being a self-proclaimed expert on side-scrolling brawlers, I learned quite a bit from Go Straight. For example, I did not realize that Kung Fu Master (NES, 1984) sprung the entire genre, and was in fact loosely-based on a Jackie Chan movie. Likewise I never understood how influential Renegade was for the NES. I remember playing Gladiator in the arcades in the 80's and never realizing how groundbreaking it was.

This book helped me discover so many games I had never heard of before. There are many, many obscure arcade brawlers including Gang Wars, Dynasty Wars, Crime Fighters, and Guardians of the Hood. It's a crime that some of the best of the genre like Golden Axe: Revenge of Death Adder and Dinosaurs And Cadillacs have never been released to home systems. I was also intrigued to discover new fighting games like Wulverblade and Mother Russia Bleeds.

When I first got this book it sat on my table for a week or two. I think I was just intimidated by the size, thinking it would take me forever to bang out a review. But once I finally cracked it open I could not put it down. I sat there for hours. This is the kind of book you get lost in. On one page you'll find some bizarre arcade game you never knew existed, and on the next there will be an old favorite from your childhood.

I showed this to my friend (and fellow fighting game fanatic) Chris, and the guy was absolutely floored. So maybe I'm not crazy after all. Go Straight is an outstanding piece of work, so go straight (sorry) to Bitmap Books and order a copy today. You won't regret it.