The SNES Omnibus: A-M
The Super Nintendo and its Games
Volume 1: A-M 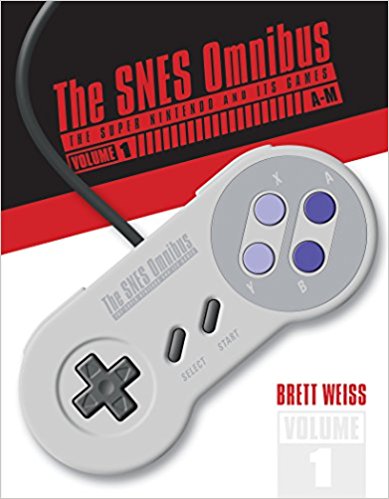 If you're a gamer in the market for a coffee table book or a freaking coffee table the SNES Omnibus is likely to meet your criteria. It's so damn big all you really have to do is add four legs! This heavy-duty 416-page tome is a celebration of the Super Nintendo. The foreword makes an argument for the system being "arguably Nintendo's greatest console", as it arrived at the pinnacle of 2D gaming. The preface establishes the "street cred" of author Brett Weiss who is certainly a prolific author of gaming literature. The book covers 350 SNES titles from A-M. That's right - this is just the first volume!

I happen to own a sizeable SNES game collection (which I cherish) but while paging through this book I realized I was missing a lot! A good chunk of these games I had never even heard of. Captain Novolin? Dragon View? Magic Boy? Harley's Humongous Adventure? Naturally you'll find all the heavy-hitters like Batman Returns, Chrono Trigger, Contra III, Donkey Kong Country, Final Fantasy III, Killer Instinct, Mortal Kombat, and Legend of Zelda: Link to the Past. A few even have multi-page spreads. I made a list of interesting games I'm planning to track down including Al Unser Jr.s Road to the Top (snow!), Ardy Lightfoot (pirate ship!), Bazooka Blitzkrieg (light gun!), Dirt Trax FX (FX chip!) and Biker Mice from Mars (Mice!) 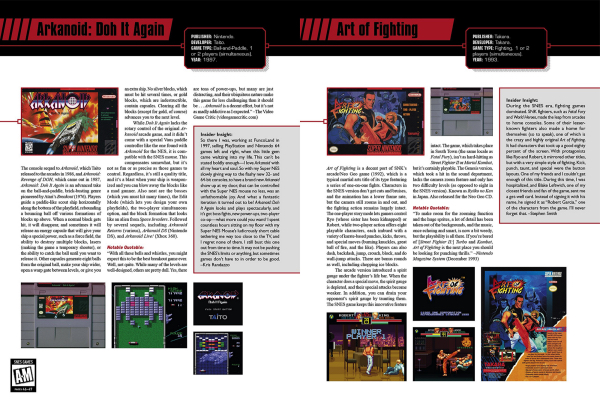 Each game is dedicated at least one page including box art, the cartridge label, and multiple game screenshots. There are even a few magazine ads thrown in here and there. I wish larger screenshots were used to fill some of that empty space, but you'll see enough to give you the gist. Publisher, developer, year, and "game type" information are also provided. A rarity score would have come in handy, but oh well. The text offers a detailed summary of the game along with several "Notable Quotables" cited from magazines like GamePro or highly esteemed websites like videogamecritic.com (you may have heard of it). There are also "insider insights" offering personal and sometimes funny experiences from classic gaming experts. These supporting tidbits are usually enough to let you know if the game is actually any good.

The SNES Omnibus is a substantial book - both literally and figuratively. It's one any Nintendo fan would be thrilled to receive it as a gift. It's not the kind of book you read from front to back, but flipping through it always reveals something new - whether it's an old favorite or maybe an obscure title you never had the chance to play. The SNES is was a groundbreaking console and this high-quality book makes you appreciate the breadth of its library. It also makes you want to play the system.