The SNES Omnibus
The Super Nintendo and its Games
Volume 2: N-Z 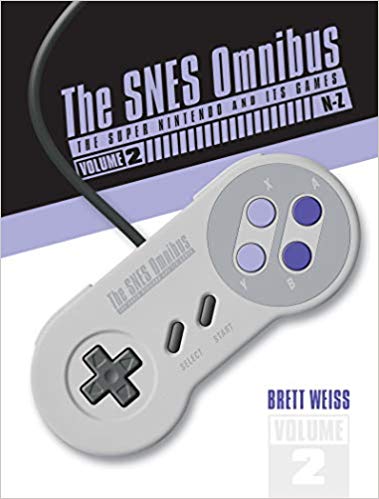 Most people prefer "real books" and SNES Omnibus Vol 2 offers a big 'ole pile of dead trees for the money. Clocking in at 458 pages this is the mother of all coffee table books. And just look at how handsome that cover is! Tantalizing images across the back cover feature timeless gems like Super Mario World, Street Fighter II, NBA Jam, StarFox, and Primal Rage. When it comes to this system anyway, the second half of the alphabet seems to be the stronger half.

The foreword sets the stage by describing how the Super Nintendo found a sweet spot in the competitive video game market of the early 90's. Though its processor was underpowered (compared to the Genesis) its architecture was designed for "maximum visual and audio performance". That along with its innovative six-button controller allowed the system to make an instant and lasting impact. While its initial launch offerings were light, the system would eventually amass an impressively large library with countless beloved classics.

Like the first edition, this tome dedicates one or more pages per game with 350 titles in all. Included with each are screenshots, box covers, cartridge photos, and even some vintage advertisements. Some of the photos are a bit on the small side, but you can tell the author at least made an effort to use the page space efficiently. Each game is described in detail along with fun facts and "notable quotables" from various web sites and periodicals (including this one). There are also "insider insight" sections from people sharing their personal experiences with the games. 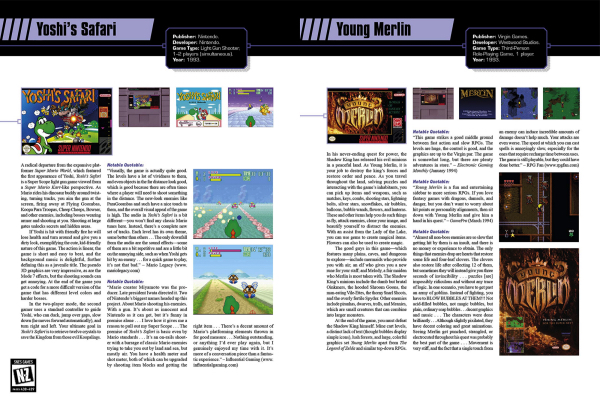 The book kicks off with a substantial number of sports titles, which is understandable when you begin with the letter "N" (NBA, NCAA, NFL, NHL, etc). You'll find several quotes by the Video Game Critic in this section, largely because I'm one of the few game critics to pay close attention to sports titles. And yes, I still think NHL 94 is the best hockey game ever.

Paging through this book brought back fond memories of late night game marathons with friends, with memorable titles like Tetris 2, Teenage Mutant Ninja Turtles: Turtles in Time, and the incomparable Zombies Ate My Neighbors. It's amazing how so many blockbuster titles for the system began with "Super", including Super Castlevania IV, Super Ghouls and Ghosts, Super Mario Kart, Super Bomberman, Super Mario World, Super Metroid, Super Punch Out, and Super Star Wars just to name a few.

Like the first volume, collectors are bound to find undiscovered games they'll want to seek out. For me that list includes Operation Thunderbolt, Outlander, Phantom 2040, Pocky and Rocky 2, Run Saber, Skyblazer, and Untouchables. Even some of the notably bad titles peaked my interest such as Oscar, Sea Quest, Space Ace, and The Simpsons: Bart's Nightmare. Unfortunately there's no rarity scores given so a cart that looks intriguing might turn out to be far out of your price range.

SNES Omnibus Vol 2 is overwhelming in its bulk and difficult to review, but it's that heft that makes it such a good investment. No matter how many times you leaf through its pages you're bound to learn something new or discover some obscure title you never knew existed. This along with the first volume makes a perfect supplement for SNES collectors, classic game enthusiasts, or those who just want to take a fun trip down memory lane.