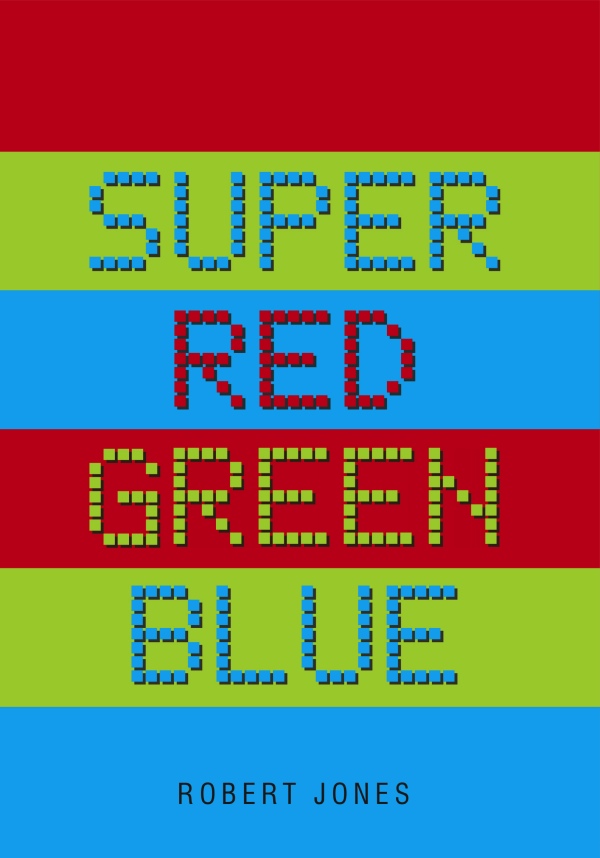 I don't normally read fiction but how could I resist a book about "retro games and the people that play them"? If anything, I may be overqualified to review a book like this! Fortunately it turned out to be only 125 pages and printed in a larger-than-normal font. I knew this was something I could handle.

Super Red Green Blue is a coming-of-age story about a video game enthusiast named Steve trying to find his way in life. He works with two friends at a used video game shop in London called the Super RGB. All three possess an encyclopedic knowledge of gaming and maintain a fierce reverence towards video game "heritage". One of the friends, Jeff, is even in the process designing a game of his own, a project Steve doubts will ever get off the ground.

The first chapter comes off like a scene from the film Clerks as the three squabble about frivolous video game topics like the top five Japanese role-playing games of all time. Throughout the book just about every conversation is chock-full of fun game references, whether it's espousing the virtues of a particular franchise or trashing a popular series. The profanity-laden diatribes are funny and have an authentic "slice of life" quality gamers will appreciate.

Subsequent chapters delve into Steve's on-and-off relationships with women. Each girl he meets has a distinctive personality and background that shapes the way Steve views himself and the world. Honest and personal, these scenes makes it clear that the book is at least semi-autobiographical. How else could he describe how a girl held a cigarette with such lucid detail? I appreciate how these relationships are explored purely at a psychological level with no sexual content.

Super Red Green Blue didn't truly really win me over until the chapter detailing Steve's trip to Tokyo, Japan. At the time he was covering a convention for a gaming magazine he was working for. There he meets a Japanese girl trying to break into a video game industry. She was having a tough time because the industry tends to eschew women (especially in Japan). During one memorable night she introduces Steve to the Akihabara - the mecca of the gaming world! This video game wonderland dazzles his senses and leaves him awestruck. Later they visit obscure arcades, dance at clubs, eat local cuisine, and drink plenty of booze. It's a lot of fun to read about this adventure because it's written in a way that makes you feel as if you're along for the ride.

The video game references throughout the book are rich. There are top-five lists (like best side-scrolling brawlers), off-the-cuff references to obscure titles (such as Under Defeat), and in-depth discussions about the fighting moves in Garou: Mark of the Wolves. In one chapter Steve examines the intro sequence to Final Fight in detail just for the sake of doing so. I was impressed by the author's knowledge of Japanese video games, some of which sound so intriguing I intend to track down a few.

While the book might be considered a celebration of retro gaming, there's also a lingering sense of disillusionment running through its chapters. Steve and his friends perceive the gaming industry as being on the wrong path. Focusing on profit over all else, the big companies have forsaken the passion and creativity that made the industry so appealing in the first place. I think all retro gamers will agree with these sentiments to some degree.

While reading this book I felt a certain kinship with the author. Like him, video games have been an enduring subtext in my life. They are a sanctuary I can always escape too. While my recollections of significant life events have grown hazy I can recall playing specific games during those times with crystal clarity. I also related to Steve's memories of his father. Like Steve, I only played games with my father sparingly but those were moments I will always treasure.

Super Red Green Blue is a bittersweet story that will resonate with all of the retro gaming enthusiasts out there. It's probably the most effortless read I've ever done. I highly recommend all gamers to pick it up and also consider it as a thoughtful gift for anyone who appreciates classic games.