The Ultimate History of Video Games

A Book Review By The Video Game Critic 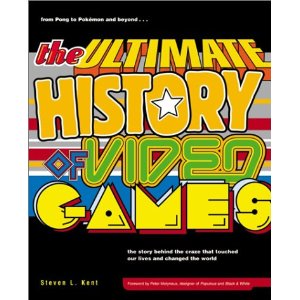 I've read my share of video game books, but The Ultimate History of Video Games by Steven L. Kent is by far the most riveting and insightful. I consider myself an expert on classic games, but I never knew the story behind the games. If you love video games, you owe it to yourself to buy this book.

Ultimate History details the modest origins of major industry players such as Atari, Nintendo, and Sega. You'll read about the age-old struggle between passionate programmers and businessmen who only care about the bottom line. You'll learn about ridiculous licensing agreements and court cases that resulted in bizarre settlements. You'll understand the management decisions that propelled some systems to greatness and doomed others to failure.

The book's text is easy to read and often very funny. It does a great job of balancing minute details, like personality disputes, with broader issues, such as the impact of video games on culture. It's loaded with frank quotes from the very people who shaped the industry. It's especially interesting to hear how these people would have done things differently in retrospect.

Here a just a sample of the interesting stories covered in the book's 600+ pages:

Is there anything wrong with the book? Well, one thing that initially bothered me was how the stories are not necessary told in chronological order. Sometimes the book seems to double-back on itself, giving you a sense of deja-vu. In retrospect however, this was probably necessary to maintain the narrative flow. Since many of the storylines overlap by several years, the author probably did the best he could to keep things readable.

Ultimate History of Video Games focuses on the 1970's and 1980's, but covers up to the early 2000's. It debunks a lot of the rumors you've heard over the years, and corroborates others. Enjoyable to read from cover to cover, this book has given me a new perspective on video games. I highly recommend it!