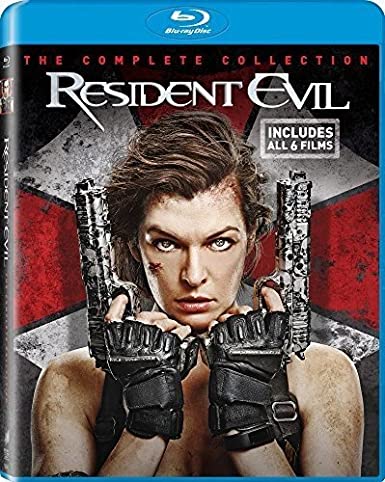 I originally stopped paying attention to the Resident Evil movies after the first two, as I was very disappointed with how they completely diverged from the video game series. Instead of the creeping horror of the games, the films were a dizzying series of jump-scares, explosions, and soldiers engaging in inconsequential shootouts.

Of course being stuck at home due to a pandemic gives you a whole new perspective. The film series did get a few things right. They were correct about a future pandemic, except for all the zombie stuff. They also predicted the emergence of an all-powerful monopolistic corporation controlling the world's production chain, which we now know as Amazon. Now that's scary! Anyway I saw this six-film Blu Ray set on Amazon and figured its was time to give the series another look.

This page contains my random thoughts upon watching all six films over six nights with the help of a fridge full of beer (now empty). Caution: spoilers ahead! 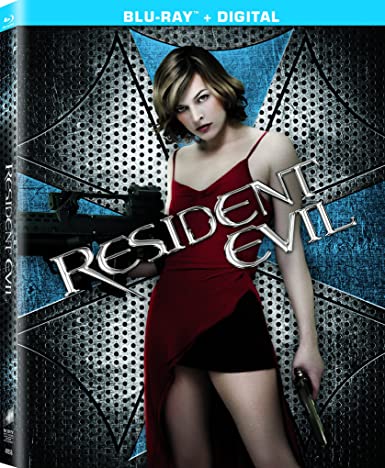 I hoped the original Resident Evil film would be faithful to the video game but it was not. Instead of taking place in a claustrophobic old mansion the producers watered things down by setting the story in an expansive, sterile underground headquarters. The industrial scenery isn't very interesting but I guess it was easier to film there. The premise is that a deadly virus has been unleashed in Umbrella's underground headquarters and a squad of soldiers has been sent in to investigate. The star of this movie is Alice, an Umbrella super-soldier fighting a bout of amnesia. Milla Jovovich plays this role in all six movies, gradually growing into the role. The movie is vapid and predictable, but does have a few redeeming qualities. The production values are good and the acting is respectable. There are a few intense scenes involving deadly lasers and zombie dogs. We're also treated to some gratuitous nudity compliments of Milla Jovovich. To be fair, she is wearing a sheet of paper. My main gripe is how the movie shamelessly sets up a sequel by not even attempting to resolve anything. 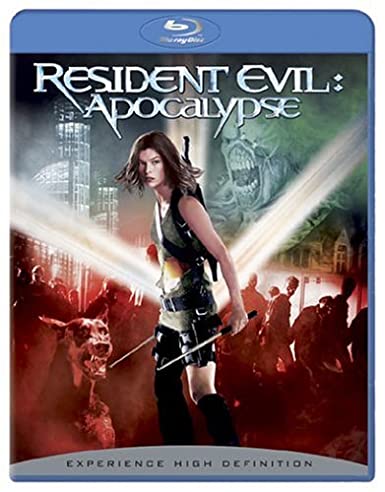 Like the transition between the first and second Resident Evil video games, Apocalypse takes the action out of the lab and into the chaotic streets of Raccoon City where the virus is spreading and people are freaking out. The basic formula is the same as the last film, boiling down to a series of loud shooting scenes set in locations like a church, graveyard, and police station. One new addition is the off-duty police officer Jill Valentine decked out in standard issue tube top, miniskirt, and boots. Yowza! Maybe this isn't so bad after all. The monster "Nemesis" from the Resident Evil 3 game serves as the "big heavy", and I feel bad for the guy buried under all those layers of rubber. High on explosions but low on content, Apocalypse is the kind of movie you forget about the moment it ends. 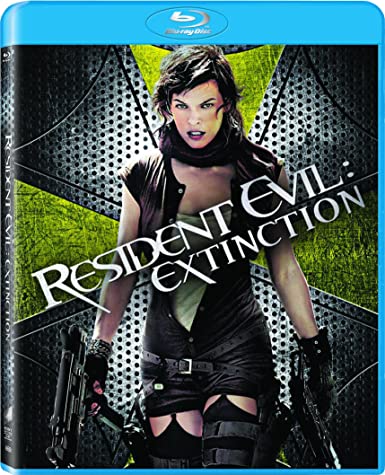 I have to give the producers of Extinction credit for taking the series in an entirely new direction. At the end of Apocalypse the virus had spread worldwide, leaving the planet in a desolate state. Extinction is like Mad Max in Nevada, with trucks and buses barreling across the desert while smashing through barriers and plowing through zombies. Linden Ashby of Mortal Kombat appears in a minor role. The action is very much by the numbers, although mostly takes place in daylight for a change. While it gives the movie a very distinctive, brownish hue, I found it to be much less scary. The movie climaxes with a battle in a half-buried Vegas, and it might be the loudest scene my ears have even been subjected to. Near the end of the movie Alice discovered she was one of an army of clones. The main villain is played by Iain Glen (Jorah in Game of Thrones) and he brings the proper level of gravitas to the role. I should also mention that the scene where the scientists are teaching a zombie how to use a camera is a direct rip-off of Romero's Day of the Dead. 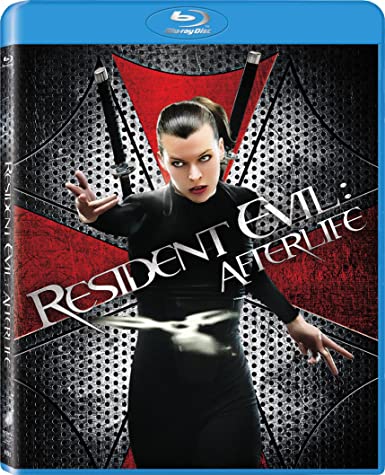 Afterlife tries to pay off the ending of the previous film by having Alice and her clone army take on the head of Umbrella Corp... in Tokyo. Why Tokyo? So they can incorporate a lot of crazy martial arts action with throwing stars and ninjas and stuff like that. Eventually Alice loses her powers and ends up holed up in a deserted prison in LA with some friends and a few shadowy dudes. An undead mob trying to break into the building, led by a hooded giant who looks like he was played by Shaquille O'Neal. It's all a blur to me now but somehow Alice and her friends manage to escape to a tanker named "Arcadia" sitting just off the coast. She thinks it holds the key to their salvation but it's just another Umbrella trick. At this point the movie turns in a really blatant Matrix rip-off, with all sorts of bullet-dodging and shapeshifting and all that garbage. Incredibly, the credits roll just as Umbrella's military helicopters are descending upon the ship. Shameless! 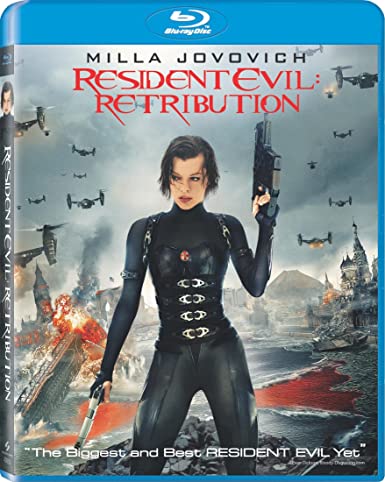 This one begins with the best sequence in the whole series. It shows the attack by Umbrella helicopters on an oil tanker, played in slow-motion and in reverse during the opening credits. Explosions look so much more interesting played backwards! Under the guise of "cloning" Retribution manages to resurrect several familiar faces from earlier in the series. It also covers a lot of ground including New York, Tokyo, and Moscow. This is made possible by the fact that the bulk of the film takes place in Umbrella's testing facility which simulates cities all over the world. We're also introduced to a new character named Ada Wong. Good thing she's drop-dead gorgeous in that red dress, because you'll need something to divert your attention from her acting! The movie starts fresh but soons devolves into the obligatory series of loud shootouts where bullets flying around really don't mean anything. And in case you wonder where writer/director Paul Anderson gets his ideas from, the answer is other films. Retribution borrows liberally from Aliens, as Alice must rescue a little girl captured and held in the nest of the big ugly boss creature. The ending sets the stage for one last sequel, believe it or not. 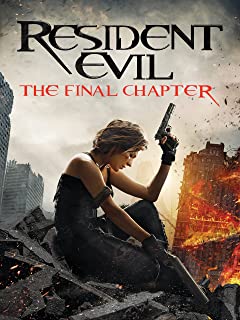 This is the kind of movie that begs the question "Wait, there's another one?" Yes, and believe it or not it may just be the best of the bunch! Final Chapter reprises several characters including the curvaceous Jill Valentine, now under Umbrella mind control. I didn't even recognize her with her long brown hair and purple outfit. Also returning is the mad Umbrella scientist played by Iain Glen, who is by far the best actor to appear in the series. This movie packs some exciting scenes beginning with Alice fighting some kind of mutant Pterodactyl thing in a post-apocalyptic DC. The story then moves to Racoon City via huge tanks being trailed by an army of undead. There's some really crazy fight scenes on top of these tanks as they're rumbling down the highway. The saga concludes at the original Umbrella Hive where a few unexpected twists occur. Final Chapter does a surprisingly good job of wrapping things up, making it all the more unsettling when the ending leaves the door open for yet another sequel!

So what's the verdict? Well, fans of the games may come away disappointed. The storylines don't follow the games at all, with only a few passing references to game characters and locations. If you're looking for straight-up action however, these films have you covered with massive explosions, kung-fu, and endless gunfights. There's no shortage of gore and the dialog is minimal. I think it helps to watch all six movies in a row, preferably while inebriated. I don't think any of the films rate above average, but taken as a whole the six-movie saga is pretty epic. Part of me even wants to watch the whole thing over again. After another trip to the liquor store of course.