If one classic console was in dire need of a Flashback release, it was the Colecovision. The original console was cheaply constructed and is hard to find in working condition. The thing was poorly designed and its controllers cramp your hands after prolonged use. The games however were awesome and usually far superior to their Atari and Intellivision counterparts. 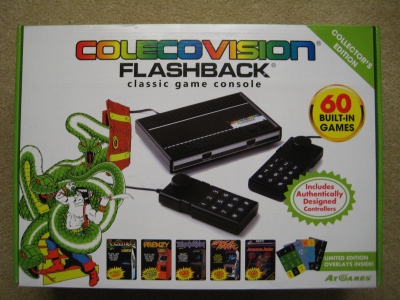 Colecovision Flashback doesn't look like much, although ridges and decals try to convey the look of a miniature Colecovision. An output in the back connects an RCA/composite cable (yellow and white plugs) to your television. If you have a newer HDTV, you might want to check to make sure it supports this. A power cable plugs into the side of the Flashback but would have looked a lot better coming out of the back. There are two buttons on top of the system: reset and power. Putting that reset button on the controller would have been preferable since you're constantly leaning over to press it.

The front of the system has ports for two wired controllers, and in contrast to the original system, it's not a painful chore to plug them in. I really like the feel of these controllers. While similar in shape to the originals, they are slightly smaller and lighter. The thumbstick provides less resistance and makes a satisfying click when you move it. The keypad on the front of the controller has a nice rubbery tactile feel. You can slide game-specific overlays over the keypad, but only a handful of these are included. Unfortunately neither the controllers nor overlays are interchangeable with those from the original system.

The first thing I noticed when I fired up the Colecovision Flashback was its clear video signal. My real Colecovision always has some degree of ugly electromagnetic interference, forcing me to jostle wires to minimize it. I prefer to play classic games on an old-style (CRT) television as God intended, but for testing purposes my friend Chris and I hooked the Flashback up to my plasma TV. We were pleasantly surprised by the results, as the games looked and played great. Still, your mileage may vary depending on the TV. 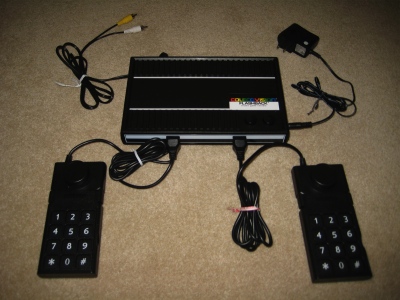 So how are the games? Well, with 60 to choose from you get a lot of play value even if you skip the clunkers. Some of the more popular titles include Space Fury, Frenzy, Choplifter, Jumpman Junior, Miner 2049er, Montezuma's Revenge, Omega Race, Venture, Jungle Hunt, and Zaxxon. The best looking games tend to be produced by Imagic, like Dragonfire, Fathom, Moonsweeper, and Wing War. You'll find a number of obscure titles like Aquattack, Artillery Duel, Evolution, Flipper Slipper, Gust Buster, Sir Lancelot, Slurpy, and Telly Turtle. Some of these haven't held up well over the years but you're bound to discover a few gems. Chris really enjoyed the head-to-head strategic action of Artillery Duel. Also included are a surprisingly number of games developed in the last ten years like Module Man, Monster Masher, Bankruptcy Quest, Mecha 8, and Princess Quest. I love the idea of new games on old systems, but I didn't find any of these particularly appealing. On the downside, there are some glaring omissions including Donkey Kong, Burgertime, Subroc, and Tutankham. And you won't find any sports titles except for the painfully slow Tournament Tennis.

One potential issue is the lack of manuals for these games. The sparse instruction booklet provides a paragraph for each title, but these high-level descriptions fail to do the games justice. Most classic titles seem simple on the surface but have subtle nuances as well as multiple variations to select from. Good luck trying to figure out how to play Rolloverture or Quest for Quintanaroo without a manual! Yes, you can find the instructions on the Internet, but it's a shame AT Games couldn't include reproductions of the originals.

As a purist I'm normally apprehensive about systems that rely on emulation software, but the games of Colecovision Flashback are very faithful to the originals. Still, I did encounter the occasional bug, like when the color palette went crazy during Aqua Adventure, or the time when Motocross Racer locked up on me. I've been told some effects are off-key or missing altogether, but I didn't notice. Most games played very well and I was able to rack up some high scores. The designers may have cut some corners but it's hard to complain about a $40 system with 60 games. I'd recommend Colecovision Flashback not only to casual gamers but collectors as well. With its clear signal and comfortable controllers, you'll probably find yourself enjoying these games more on the Flashback than you ever did before. 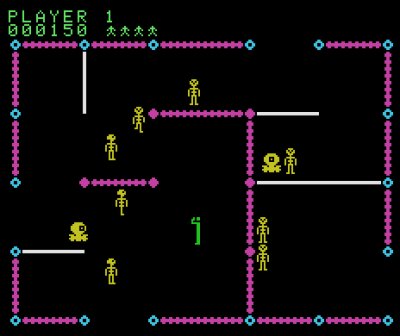