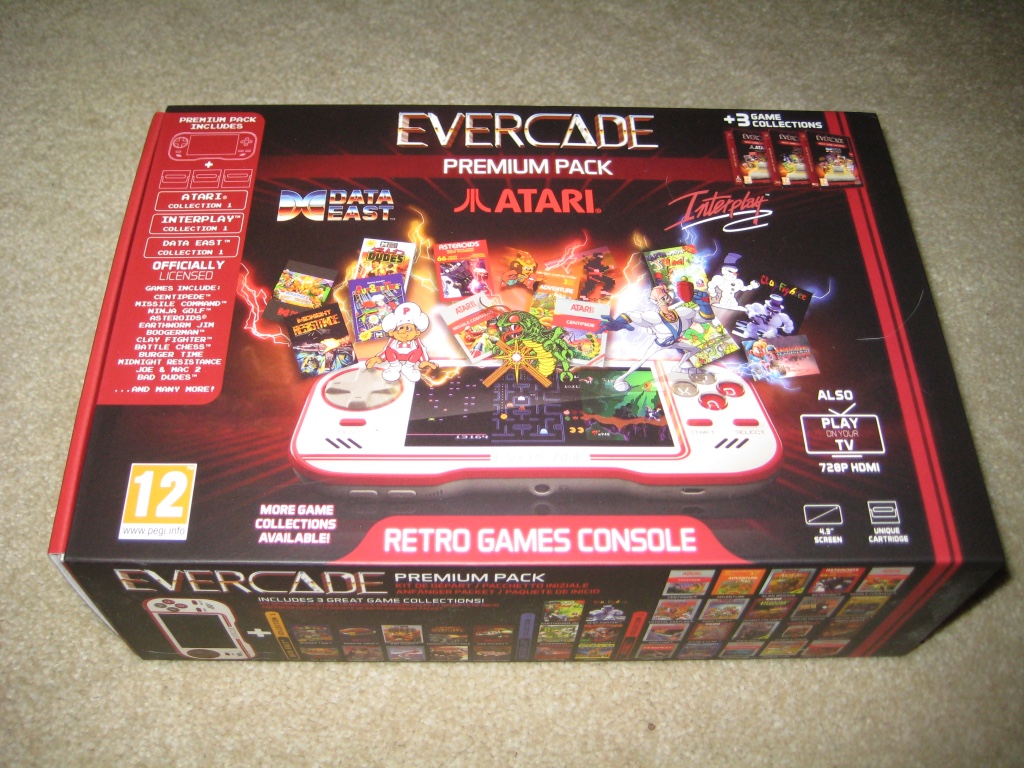 7/1/2020
I've long enjoyed classic game compilations, purchasing every one I could get my hands on from the Namco Museum Volume 1 (Playstation, 1995) to SNK 40th Anniversary Collection (Playstation 4, 2018). These collections provide a treasure trove of classic games and also represent a piece of video game history. With the advent of digital distribution however these compilations have become less common, with most publishers preferring the nickel and dime approach.

From a collector's standpoint the Evercade is appealing. It's an inexpensive little portable that specializes in classic game compilations. Although it's a portable system it can also be played on the big screen. An impressive catalog of game collections are already available with many more on the way. These collections are housed in small white cartridges (!) sold in attractive packaging with glossy, colorful manuals. Best of all, the system is completely offline! For an old-school gamer like me it's almost too good to be true. 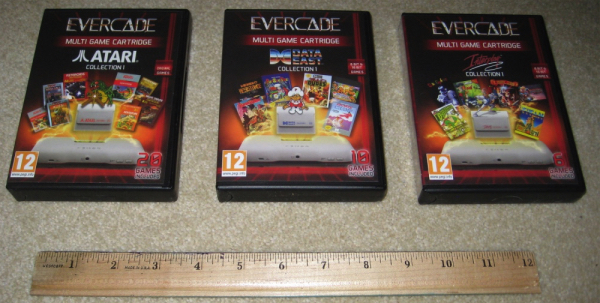 The Evercade premium pack ($99) comes with system and three collections normally retailing for $20 each: Atari Collection 1, Data East Collection 1, and Interplay Collection 1. I was a little concerned when the package arrived and the box was less than a foot wide! Each collection comes in its own clamshell case but these are also smaller than expected, measuring a mere 4 x 5.5 inches. That's a far cry from the distinguished volumes I envisioned sitting on my bookshelf. This also severely limits the size of the glossy color manuals I've heard so much about. The back of each case depicts the original box covers of the games, but the images are so tiny I can't even make them out. The thin manuals are more like pamphlets, paying brief lip service to each title with a control diagram that requires a magnifying glass to read! These manuals are mostly for show I'm afraid.

Although the inner box for the system says "ready to play", the instructions recommend fully charging your Evercade before first use. The thing was already half-charged, so I hooked up the included micro-USB cable to a USB block and let it go for a few hours. The thing can hold a charge for 4-5 hours and you can even charge it while playing. 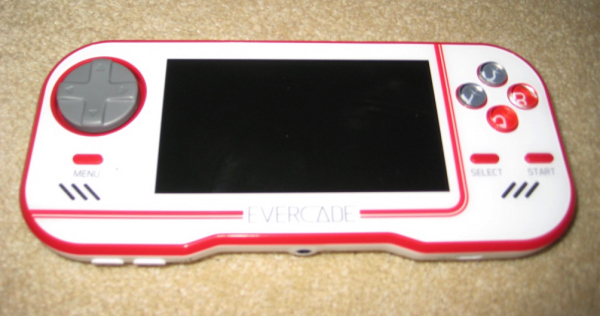 As for aesthetics, the Evercade's white plastic design with red racing stripes has "cheap" written all over it. I'm trying to imagine a better color scheme but the only ones that come to mind are all of them. That said, I love the ergonomics of the Evercade. This may be the most comfortable portable console I've ever held! It molds to my hands perfectly and the big tappable buttons feel great. I don't even mind the click-y shoulder buttons. It is kind of unfortunate that there are only two shoulder buttons, as the system will never be able to properly support Playstation or Saturn titles. The directional pad feels terrific and the select/start/menu buttons are out of the way so you won't accidentally hit them. 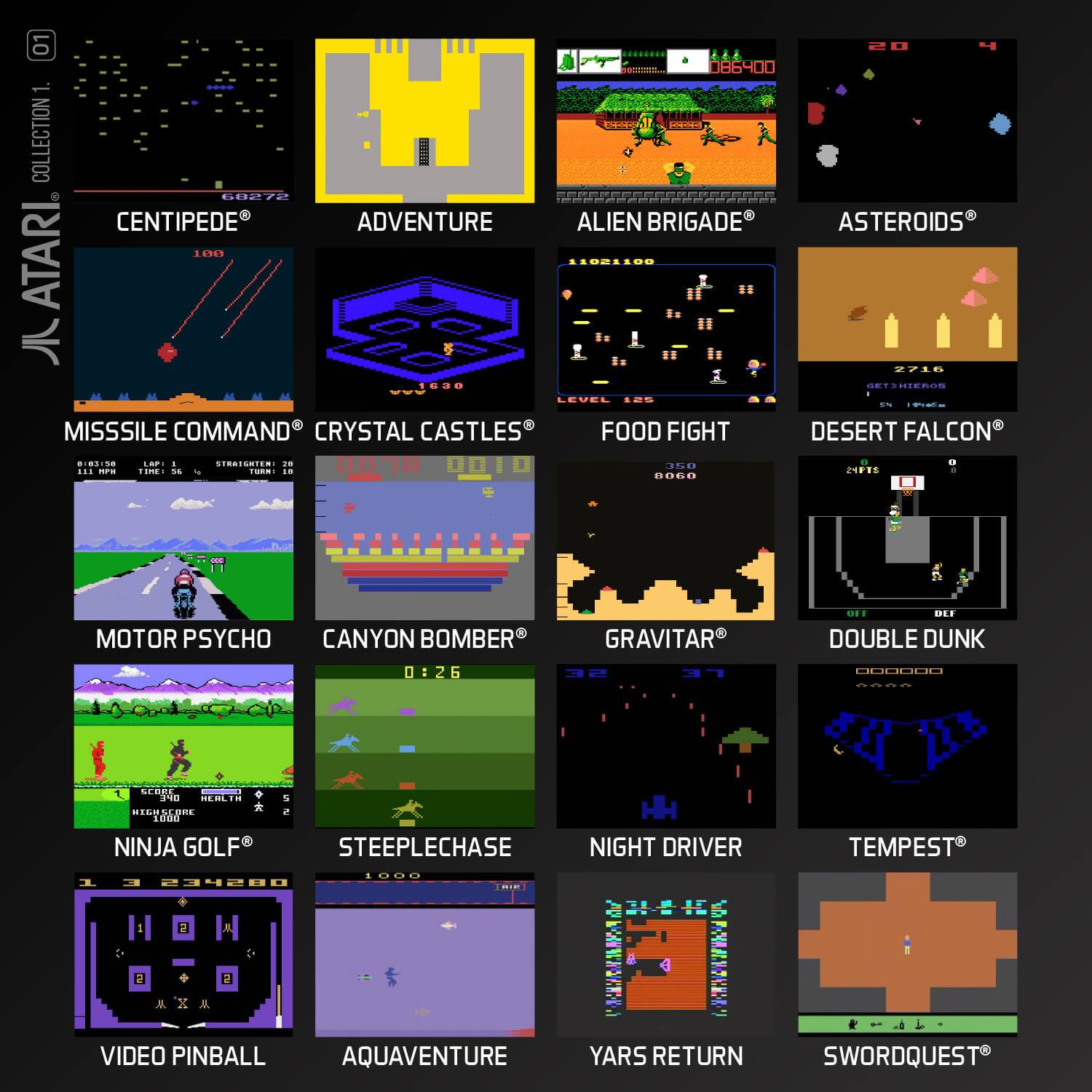 It's a shame the Atari Collection 1 was chosen as the default pack-in, because it's badly flawed. Most of its 20 games hail from the Atari 2600, and while there are some heavy hitters like Adventure, Asteroids, Centipede, and Missile Command, there are also several that just don't belong. Aquaventure and Tempest are merely playable prototypes - titles more suitable as bonus extras. Night Driver and Steeplechase were designed to be used with analog paddle controllers and are practically unplayable without them. Swordquest Earthworld is utterly incomprehensible without the accompanying instructions and comic. And why would they include the obscure Yars' Return over the ever-popular Yars' Revenge?

The collection has no concept of difficulty switches which can dramatically alter the games. For example, in Asteroids setting the difficulty to "A" adds sharp-shooting UFOs into the mix. You'll never see them on the Evercade, sadly. The settings screen would have been a good place to toggle these, but the only option I ever see is the screen aspect ratio. Atari 2600 games also have dozens of variations detailed in colorful grids in their original manuals. The paltry Evercade manual doesn't even attempt to address these. It's too bad because the actual games play well and some look fantastic. Missile Command looks stunning with its sharp lines and vivid color schemes.

Perhaps the biggest selling point of Atari Collection 1 is its four Atari 7800 titles: Alien Bridge, Food Fight, Ninja Golf, and Motor Psycho. These play very well and some are quite rare. I just wish they didn't map the easy-to-hit X button to reset! There's no way to track high scores in any of these games, which feels like a missed opportunity. I feel like someone tossed this collection together without doing their homework. These timeless classics deserve better. 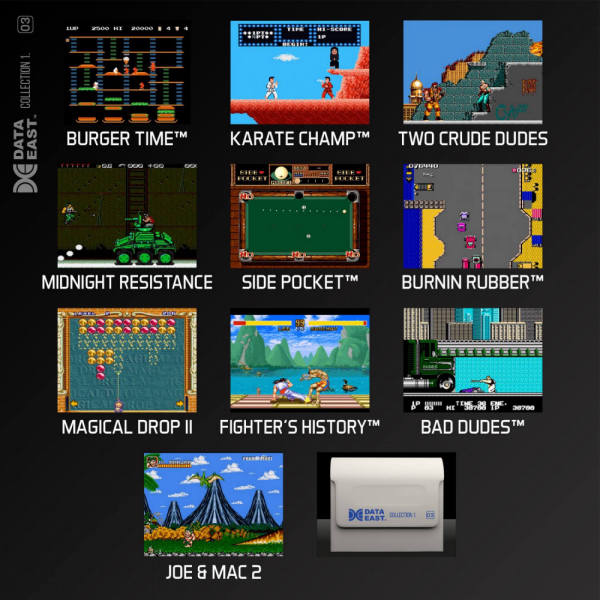 The Data East collection is considerably better, with ten quality titles hailing from the NES, Genesis, and SNES. Bad Dudes (NES) is a side-scrolling brawler which seemed awfully choppy until I went back and played the original NES cartridge. Yep - it's supposed to be that way! Two Crude Dudes (Genesis) takes the violence to the next level with its larger 16-bit sprites. Burgertime and Burning Rubber (aka Bump and Jump) are two fine NES games, although the controls are a little stiff. Midnight Resistance is an excellent army shooter with a Contra vibe. Fighter's History is blatant Street Fighter II rip-off (even the music sounds the same) but at least it's a quality rip-off. Karate Champ is a rudimentary one-on-one fighter that shows its age. Joe and Mac 2 is a terrific prehistoric side-scroller but since the Evercade doesn't support two-players you won't get the benefit of co-op. Is there a reason they included this sequel over the original Joe and Mac? Magical Drop 2 is an okay puzzle game and Side Pocket is an addictive billiards title. I assume this is the SNES version of Side Pocket because it's lacking the swanky Genesis lounge music.

These games inherently track the best score so it's possible to use the load/save state feature as a poor man's high score save system. It's a hassle though, especially with no auto-load option. That said, this Data East collection is by far the strongest of the three. 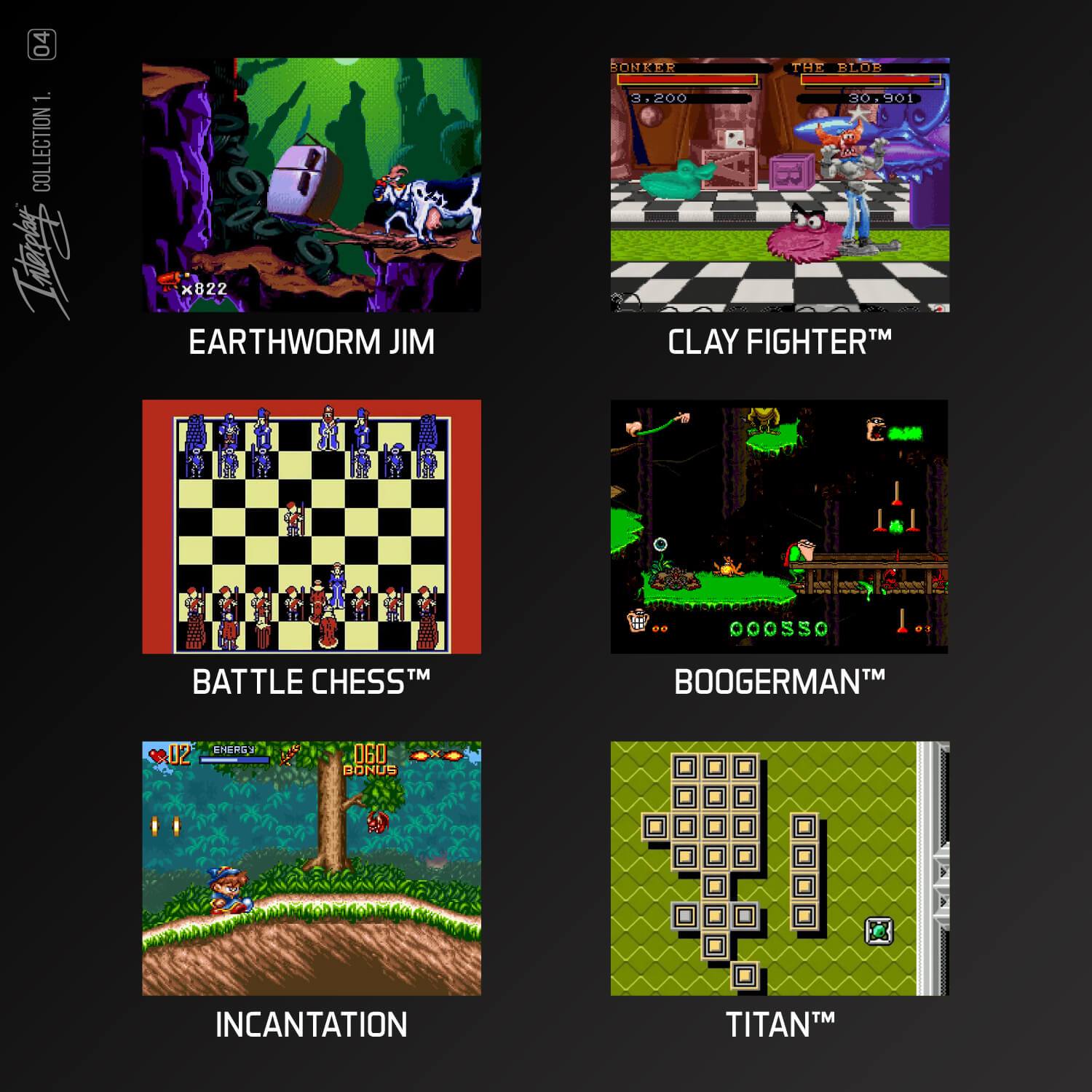 Interplay Volume 1 contains a paltry six late 80's/early 90's titles of varying quality. Battle Chess is simply chess with animated pieces. It's the kind of game you'd expect to play on a computer, but this is actually the NES version. When you move a knight it will slowly trudge along the spaces, pausing occasionally so a pawn can step out of his way. Upon taking a piece, a separate animation shows a quick one-on-one battle sequence which is quite entertaining the first time you watch it. Boogerman (Genesis) is a fun 16-bit platformer known for its gross-out humor (farts and booger flicking). Clayfighter was a big hit with my friends back in the day but its slow, stiff gameplay hasn't aged particularly well. That said, it's amusing to watch a snowman face off against Elvis. It's a shame they didn't list any of the moves in the manual. Isn't that what a manual is for?

Earthworm Jim is the obvious headliner, offering rapid-fire, cow-launching intergalactic fun. Its surreal graphics, excellent soundtrack, and humorous animations make it a standout title. Incantation is a generic side-scroller never released in the States, and once you play you'll know why. Titan is a basic clear-out-the-bricks game that suffers from choppy scrolling. All in all, the Interplay collection has its moments but not enough of them. 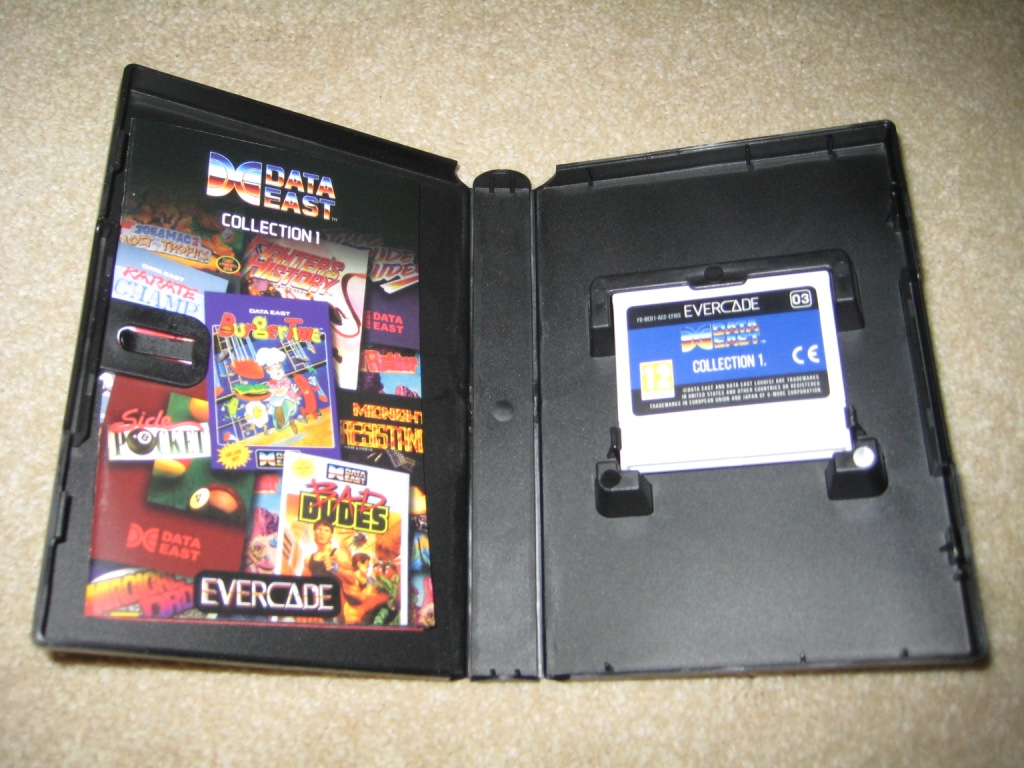 As an expert on the topic I'd also like to say a few words about the Evercade user interface. It's not great. When you select a game to play there should be some sort of immediate feedback. Instead the screen just freezes for a few moments while the game is loaded. Likewise when saving there should be some indicator that it did in fact save successfully. The lack of an auto-load option seems a bit lazy. And would it have been too much trouble to mention what system each game hailed from? Considering most of them were released on multiple platforms, that's kind of a big deal. At the very least this information should be included in the manual.

Enjoying the Evercade is not quite the effortless experience some reviewers have made it out to be. The cartridge slot is super tight so you really need to work the carts in and out with your thumb. I wish there was a way to bypass the opening Evercade logo intro, since one supposed benefit of cartridges is instant loading. Since I prefer to play these games on an HDTV I had to track down a mini-HDMI to HDMI converter. These are harder to find than you think. After striking out at Target, Home Depot, and Staples, I was finally able to snag one at Best Buy. After hooking it up I had trouble getting it to work because that mini wire has to be really snug. If the wire comes a little loose during play the entire system will reboot! I've also encountered intermittent audio problems which I attribute to that wire connection since I haven't encountered them in portable mode. I'm starting to think having a wire plugged into a portable is a bad idea, especially when playing frenetic fighting games.

After coming in with sky-high expectations I came away somewhat disappointed with the Evercade. The collections contain a weird hodgepodge of common games with only a few rarities. Messing with the wires can be a headache when playing on an HDTV. And while the games look sharp and generally play fine, I still prefer playing them on their original systems. I have no burning desire to collect the entire Evercade library but might be interested in future collections if they offer hard-to-find or previously-unreleased arcade titles.

So here's the scoop. If you're looking for an instant retro-game collection you can play as a handheld, Evercade will do the trick and won't break the bank. If you already own most of these games however or prefer big screen action, you may want to think twice before diving in.