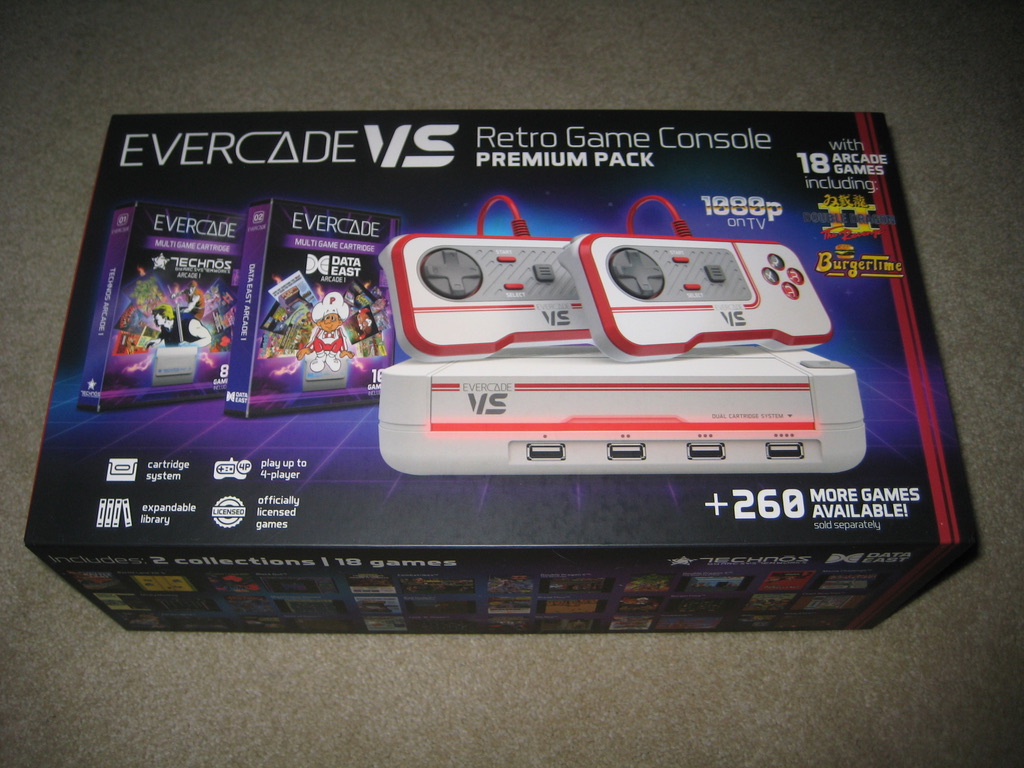 Review by The Video Game Critic

6/6/2022
Whenever I invite someone into my game room the first thing they ask is what that little white box on the floor is. When I flip open the lid to reveal the two cartridge slots, eyebrows are raised. After playing it they ask how much it costs and where they can get one.

I wasn't sold on the original Evercade which assumed the form of a handheld system. I loved the concept of real cartridges packed with classic games, but the system itself felt clunky and was difficult to output to a television. In retrospect I'm glad Evercade took the handheld-first strategy, as they learned the necessary lessons to develop this more polished, fully-realized system. 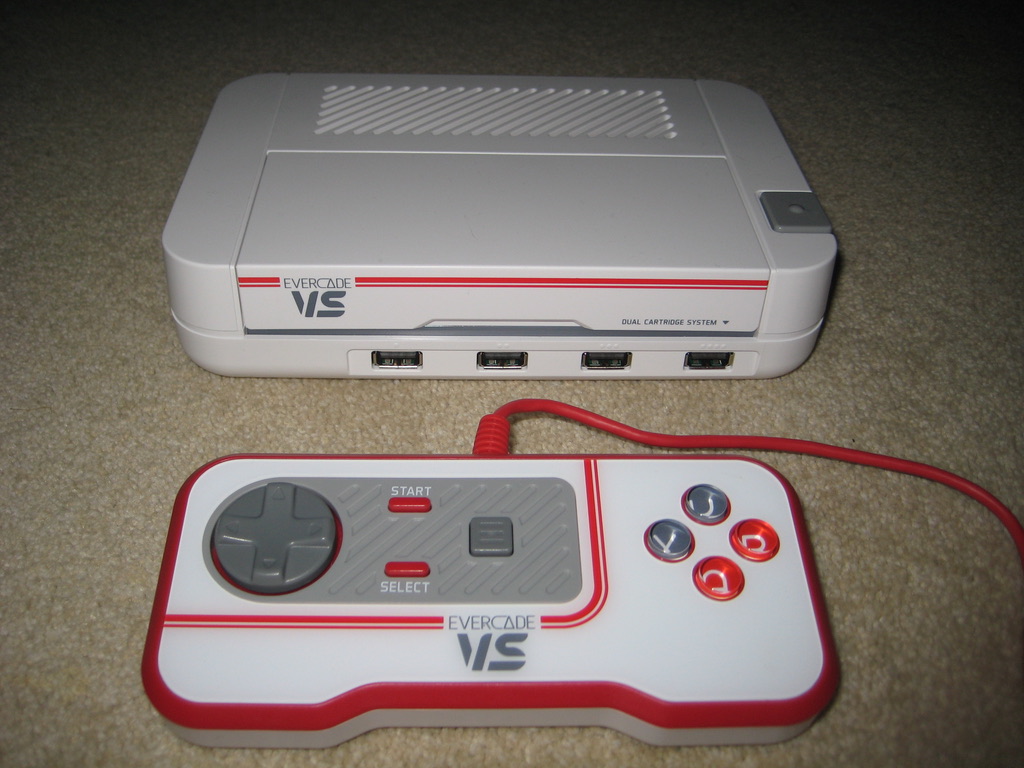 The Evercade VS is a rectangular 8x5 inch white box with a glowing LED power indicator strip across the front. Actually, turning it on is half the battle. I thought my unit was broken until I noticed a little blurb in the instructions stating you have to hold in the power button for "0.5 seconds". Wait what?! Even after owning this system for months I'm sometimes mystified when I hit the power button and nothing happens.

Once you get over that tiny hurdle it's smooth sailing. The system's two cartridge slots seem odd but it actually works out well. Since each cartridge packs up to 20 games, having two plugged into your system ensures you have a wide selection of titles at your fingertips. In addition, having a pair of cartridge slots sets the Evercade apart from every other console ever made! 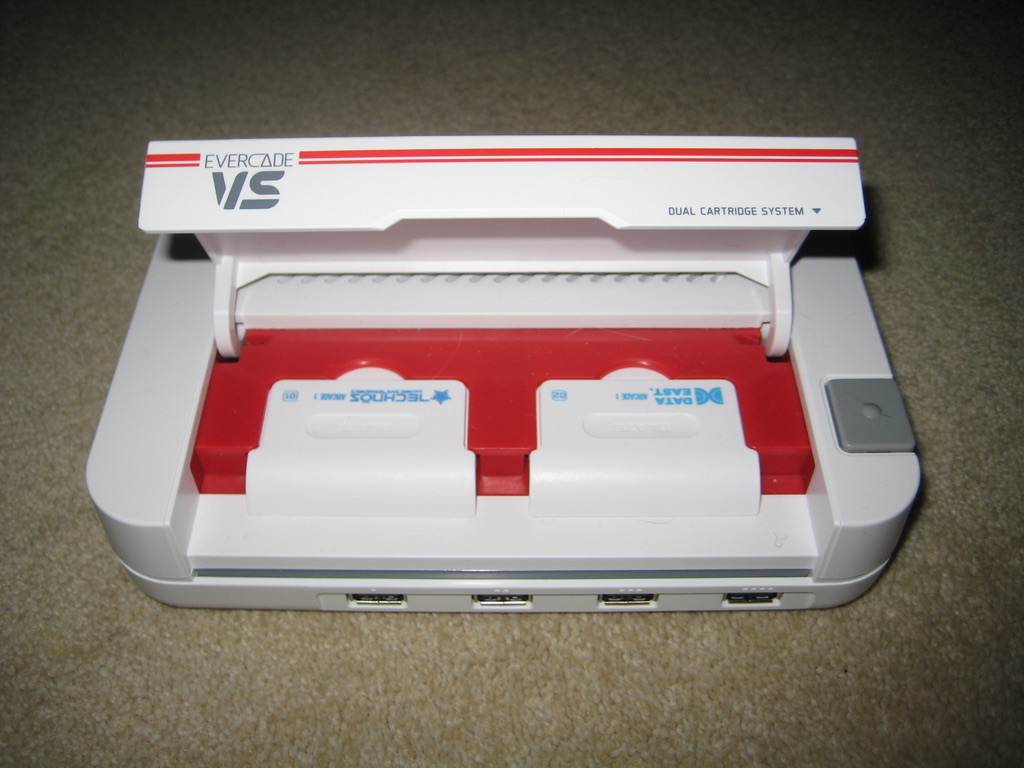 Four controller ports (!) line the front, and I absolutely heart these wired controllers. You get two with the system. They feel so good with their smooth, rounded edges and big, tappable buttons. There are four "face" buttons arranged like a diamond, along with two shoulder triggers. Naturally you get the obligatory start and select buttons, along with a big fat "home" button that lets you save progress, adjust settings, and more.

I would describe the menu interface as Netflix-style, but in fact it's a big improvement over Netflix! Upon making a selection, you get a preview of the selected game along with a handy control diagram. Evercade put a lot of thought into this system and it's paid off. I'm not even sure what I would have them do differently! Sony and Microsoft could learn a lot from this. 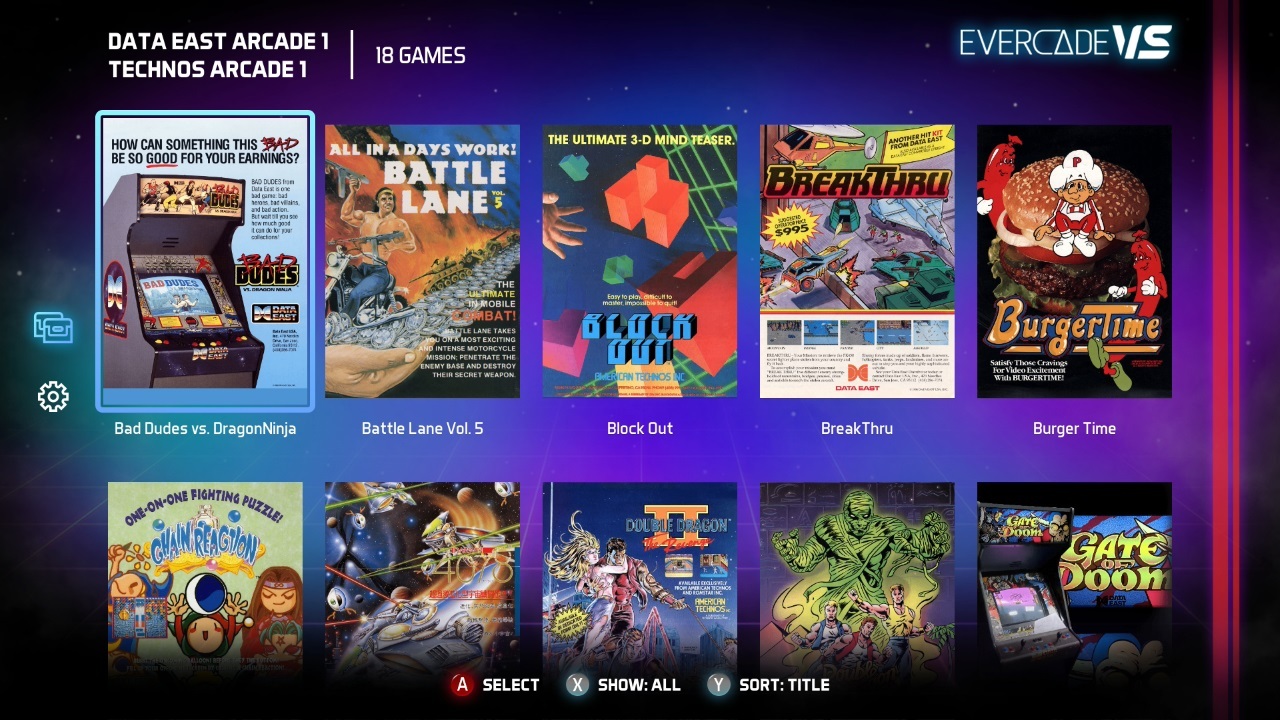 The two cartridges included with my Premium package are Technos Arcade 1 and Data East Arcade 1. Together these provide a grand total of 18 titles. Being arcade games, they all have a pick-up-and-play quality, and many support two players. I guess that's where the VS ("versus") comes into play.

The Technos collection is fascinating because I hadn't even heard of many of these. Battle Lane No. 5 is an extremely challenging Indiana Jones style-motorcycle shooter. Blockout tries to be a 3D Tetris, but falls a little flat. Combatribes is a wild, cartoonish brawler. Double Dragon II is a remarkably hard-to-control sequel to the side-scrolling beat-em-up. Double Dragon III's abrasive sounds and rough animation makes me think sometimes the console versions of games are better.

Mania Challenge is a little wrestling game with a lot of personality. It really could use more than two buttons however. Minky Monkey is a Donkey Kong Jr. rip-off starring a hideous tomato-like creature. The main character in Mystery Stones looks like Indiana Jones, if he was a homeless wino. He shoots monsters and pushes stones, but it's all very confusing and off-putting. To be honest none of these games are particularly good. If you're looking for fun, that's where the Data East collection comes in.

Data East kicks off with Bad Dudes, a terrific beat-em-up where you plow through ninjas to rescue President "Ronnie". BurgerTime is one of the greatest platformers of all time, having you navigate a little chef around dangerous condiments. If you thought the excellent Intellivision version of Lock 'N Chase was a treat, the arcade-quality version will blow your mind with its smooth animation and crisp controls. Chain Reaction is a Bust-A-Move style puzzle games that will really get under your skin. Darwin 4078 on the other hand is an early vertical shooter that's rightly been phased out by natural selection.

BreakThru prompts the question "when did this come out, and why have I not heard of it?" Like an isometric Moon Patrol, you'll blast tanks and soldiers with three-way shots while jumping bridge gaps. Wow. You have to wonder how much its generic name held it back. Sly Spy is a stunning James Bond shooter where each screen feels like a new adventure. Tumblepop is an engaging co-op platformer with an appealing Bomb Jack aestetic. Gate of Doom (Dark Seal) is an isometric D&D style brawler I could only dream about back in the day. Its sequel Wizard Fire (Dark Seal II) ups the ante with improved graphics and a new magic button. 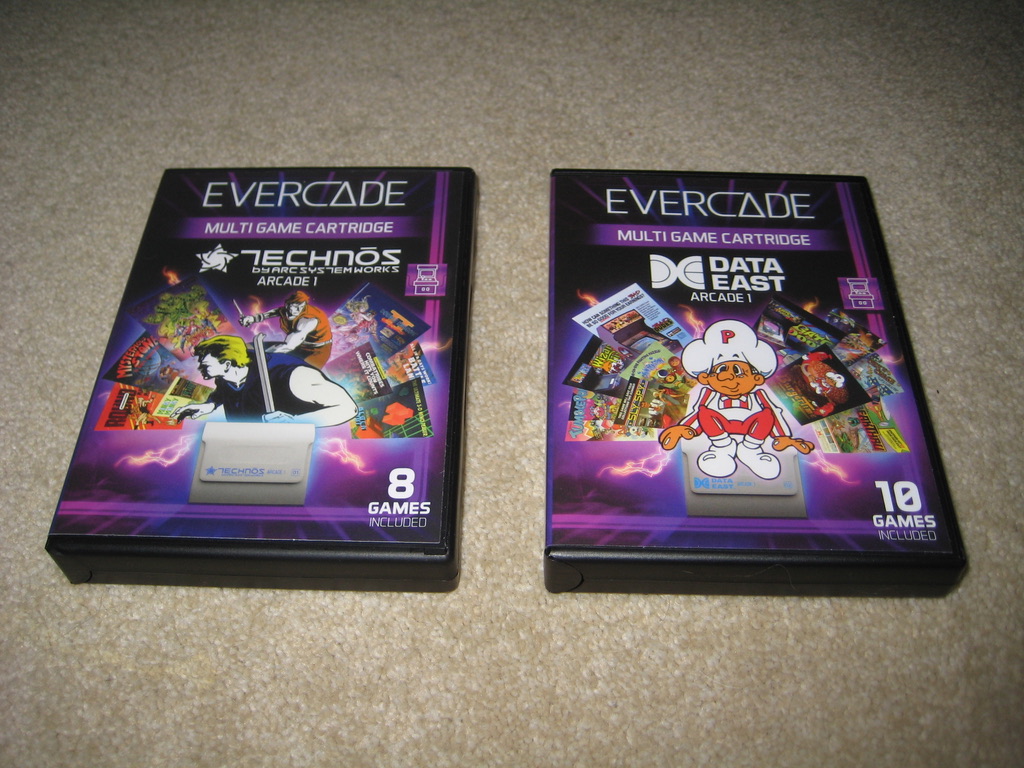 If you want to save your high scores, the Evercade has you covered. Just select "load last save" when you start up a game. Select adds credits, but don't go overboard because these games are short and it's not satisfying to simply blow through them in one sitting. I usually enter one credit and press start to begin. Upon ranking in with a high score, use the quick-save option on the home menu.

The Evercade VS is the real deal. If you have any love for vintage games - whether they be from the arcade or home systems - this system provides a great package for a very reasonable price. No more messing around with those seedy ROM sites! New cartridges are being announced on a regular basis, covering console titles and portable games in addition to arcade hits. Having the Everycade VS is like having your own legitimate classic arcade.

Purchase Evercade VS from eBay, Amazon