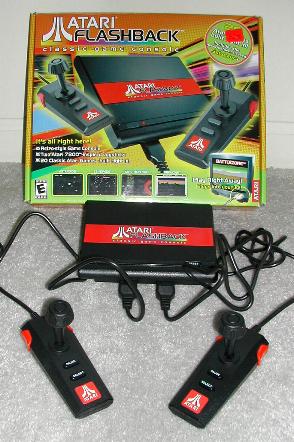 As a video game fanatic whose first console was the Atari 2600, I was totally psyched when I heard the good times were back again! Unlike the bare-bones games-built-into-a-joystick products, Flashback is a miniature console complete with detachable joysticks! The 20 built-in games are a mix of Atari 2600 favorites and more sophisticated Atari 7800 hits. There are even a few rare and previously unreleased titles.

Please note that while the Flashback is produced by Atari, this is not the original Atari many of us grew up with. No, that company is long gone. The new Atari is a software company who purchased the rights to the properties and has since assumed the Atari name. It's a critical distinction, because clearly this company has little grasp of the nature and history of these classic games. While the basic concept of Atari Flashback is terrific, the execution reeks.

The best aspect of Atari Flashback is its slick packaging, beginning with its colorful, inviting box. The back offers a series of screenshots of the more popular games included. The instruction booklet isn't bad either. Although the pages are black and white and printed on cheap paper, there's a fair synopsis of each game along with an adequate breakdown of the controls and variations.

One curious aspect of the system is the design of the console itself. While it looks sizeable in the picture on the box, it's actually less than 6 inches wide by 4 inches deep. Worse yet, its shape is not inspired by the beloved Atari 2600 console (circa 1977), but instead resembles the ill-fated Atari 7800 model (circa 1987)! What kind of "flashback" is Atari trying to evoke? This is definitely not the design most people remember! In fact, the Atari 7800 was such a failure that most people have never even heard of it.

The Flashback system has a power and reset button on top, with two controller ports on the front. But where are the difficulty switches? Most of the featured games are Atari 2600 titles, which were customizable using two difficulty switches. The lack of these switches severely hampers the playability of these games. The television cable has yellow and white RCA plugs, which in theory should provide a composite image much sharper than the original system. As you will see, that's not necessarily the case.

The only thing worse that bringing back the 7800 console is bringing back its infamous controllers. Yes, Flashback features miniature versions of some of the worst joysticks ever conceived. They may look slick, but they were specifically designed to generate painful hand cramps during extended play. Still, I will admit that the joystick mechanism feels sturdy and responsive, and it's nice to have pause and select buttons on the controller itself. I tried these out with my vintage systems, but while their plugs look identical, they are in fact incompatible.

The games are accessible through an attractive menu screen. I fired up Adventure (one of my old favorites) but quickly realized something was not quite right. The screen layouts were the same, but the objects looked odd, and the everything was fuzzy. Finally it dawned on me that either the game had either been reprogrammed or was running on a really bad emulator! The bottom line is that these games do not look or play as they should. They're not nearly as fun as the originals - not even in the same ballpark! Almost every game is plagued with obvious glitches, fuzzy graphics, awful collision detection, and butchered sound effects.

If any old Atari game deserved first class treatment, it was Adventure. The control is not bad, but the lack of difficulty switch options is conspicuous and the collision detection is heinous. This is definitely not the game I grew up with.

It's not easy to screw up a simple target-shooter like Air Sea Battle, but Flashback managed to do it. The control scheme is flaky and the background graphics are so distorted that you'll want to avert your eyes to avoid permanent retinal damage. 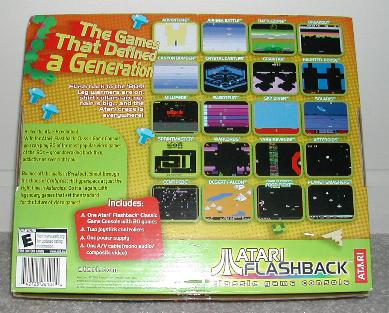 Asteroids is a second-rate version of the 7800 game which featured nifty rotation effects and several challenging variations (including two-player co-op). This pitiful version not only lacks the variations, but the thrust control is a joke. There's no sense of momentum at all, so your ship stops on a dime. Weak!

Breakout doesn't look so bad, but the game was designed to be played with analog "paddle" controllers, and the joystick control just doesn't cut it.

Canyon Bomber doesn't lose much in terms of gameplay (its only control is a single button), but the edges of the planes and canyon "blocks" look rough.

Centipede is the 7800 version, which like Asteroids was a pretty slick game. Most objects in this version look sharp enough, but the touchy control is problematic. Worse yet, poor collision detection causes your shots to pass right through oncoming fleas.

Crystal Castles looks comparable to the original 2600 version, but its control is the worst. You're constantly getting hung up on the edges of the playfield, requiring you to wrestle with the joystick like crazy. 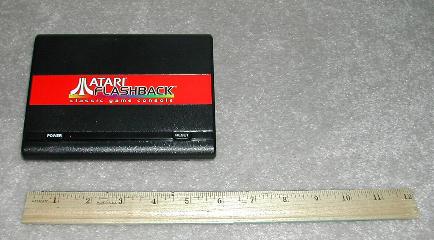 Desert Falcon for the Atari 7800 was not particularly good to begin with, and this version is so cluttered and flickery that you can't even tell what's going on half the time.

Food Fight was one of the best games for the 7800, but this rendition is confusing and slow. After playing it, I was tempted to induce vomiting, and that's not exactly a ringing endorsement.

Gravitar is a tough shooter that requires pinpoint control as you navigate narrow caverns while dealing with gravitational fields. This version runs way too fast, and incredibly, there's no gravity at all! An insurmountable difficulty level and inexplicable pauses in the action render this one worthless.

Haunted House is yet another disappointment. The numbers at the bottom of the screen vibrate nervously, and the scary sound effects of the original game have been replaced with generic beeps. The "redrawn" spiders only have six legs, which is anatomically incorrect.

Millipede may be the single bright spot of the entire package. Oddly enough, Atari went with the 2600 version, despite using the 7800 version of Centipede. No matter, this game features blocky visuals but rock-solid gameplay. The action is fast and exciting, and even the joystick control is adequate.

Planet Smashers for the 7800 is a rare space shooter that was never produced in large quantities. Once you play it you'll understand why.

Sabateur is touted as a "previously unreleased" title, but its gameplay is confusing and the graphics look downright ugly.

Sky Diver resembles the original, but for some reason it takes forever for each round to begin, which ruins the whole game. 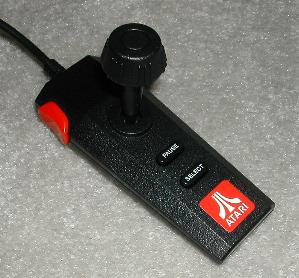 Solaris was an innovative space shooter for its time, but this spastic version runs entirely too fast and touchy controls make it impossible to navigate the map screens properly.

Warlords is a horrific translation of the four-player classic. Not only is this version remarkably slow, but the range of your "shield" is extremely limited. This is an insult to the original game.

Yars' Revenge is not as good as the original (big surprise there), but it's close, which is more than I can say for most of these games. The only perceivable differences are slightly-altered sound effects and different "explosion" visuals.

Atari Flashback is unacceptable. These are not the games we remember and love from back in the day. As a classic game collector, I actually own the original versions of all of these games, and I can attest that most are actually quite enjoyable, despite what Flashback would have you believe. These translations are lacking in every regard, tarnishing the legacy of a great system.

Fortunately, the new Atari didn't wait long before replacing this debacle with Flashback 2. Would they get it right this time? Read my review to find out.