Sega Genesis Classic Game Console does for the Genesis what the Flashback series did for the Atari 2600. It resurrects a classic console with a compact design, excellent controllers, and a slew of built-in games. The system itself is tiny with two buttons (power and reset), two controller ports, and a cartridge slot. That's right - this thing can play real Genesis cartridges! 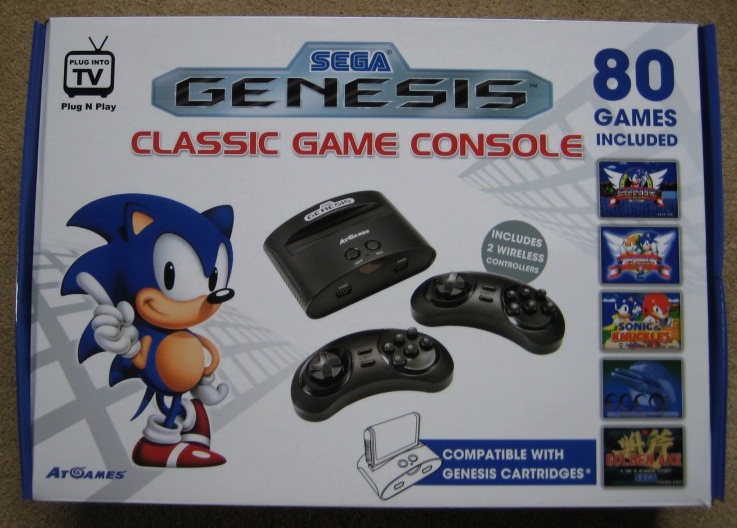 The controllers may be the best part. Not only are they molded like the original Genesis six-button models, but they are wireless! They perform exceptionally well assuming you are more-or-less facing the console's IR sensor. Unfortunately, sometimes you get comfortable, lean back, and your controller stops responding because it's no longer in line-of-sight. The system is a bit finicky when it comes to this. The controllers also have an extra "menu" button that resets the system without having to lean over the console.

Unlike the Atari Flashback controllers, there is no power switch; these controllers automatically turn off if no buttons have been pushed for a few minutes. It's a nice feature that could save you money, since each controllers requires two AAA batteries. The compartment that holds the batteries has a tiny (and unnecessary) screw holding it closed. Hopefully you'll have a tiny Philips-head screwdriver in your toolbox.

The 80-game selection claimed by the box is somewhat deceptive. There are actually 40 classic Genesis titles and 40 filler titles that resemble free Flash games you'd play on your PC.

The good news is that the collection of Genesis games is impressive. You get first-rate 16-bit titles like Comix Zone, Ecco the Dolphin, Eternal Champions, Golden Axe, Shinobi III, Vectorman, Sonic the Hedgehog, and all three Street of Rage games. There are several hard-to-find titles including Ristar, Gain Ground, and Virtua Fighter 2. I don't believe Jewel Master or Golden Axe 3 were even previously released in America. 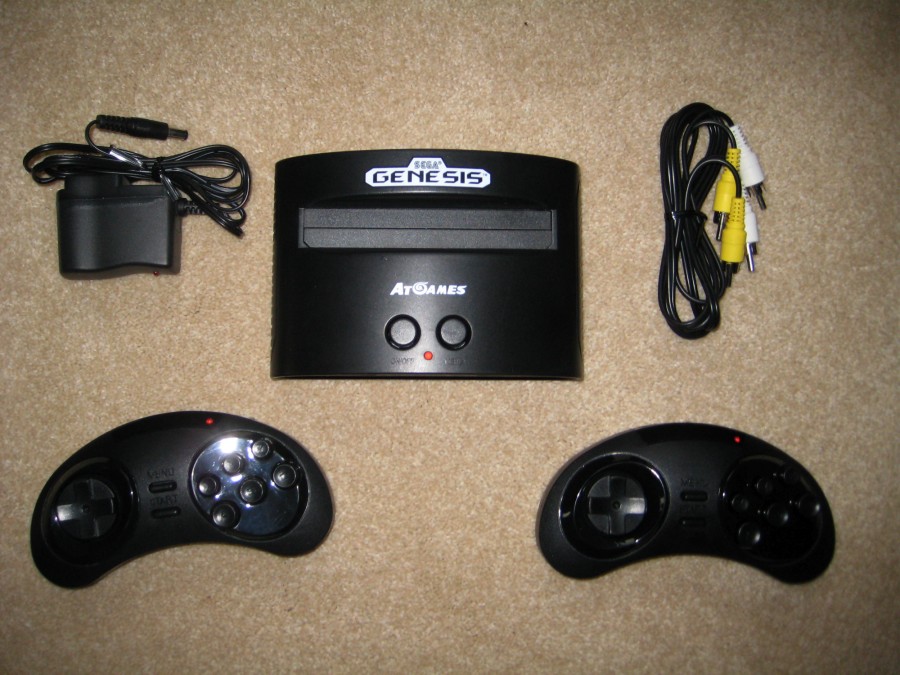 That's a lot of 16-bit action for the money. The games play well, and the composite output looks so sharp you'll think you're playing the arcade versions. The original Genesis had a very "fuzzy" video quality, so this is a major step up. When playing Streets of Rage on my HDTV I found myself noticing subtle details in the scenery I could never see back in the day.

Unfortunately since the games are emulated they do not play 100% like the originals (this goes for using real cartridges as well). Sonic never quite reaches the speeds he reached on the real Genesis - although he does come close. Also, some of the music is a little off-key. You can't have everything right? Those who still play Genesis games on a regular basis will notice slight discrepancies here and there, but most casual gamers will not. I could not get the two-player mode to work in Golden Axe 3, but otherwise my friends really enjoyed the system.

In addition to the Genesis titles, you also get 40 games that look like homemade jobs. These have names like Treasure Hunt, Spider, Cross the Road, and Mr. Balls. Most are puzzle/memory style games. I tried about six and couldn't stomach any of them. You'd need to be really bored to resort to these, but thanks to the fine selection of Genesis games, you'll never have to.

Overall Genesis Classic Game Console packs a substantial amount of 16-bit joy into one convenient package. Timeless games like Sonic the Hedgehog and Streets of Rage will appeal to everybody, and the more obscure titles will attract classic gaming enthusiasts. Thanks to the nifty wireless controllers, it's easy to sink many hours wading through these blasts from the past. And it is time well spent.

LATE NOTE: It was brought to my attention that this system also runs Japanese Genesis cartridges! Bonus!