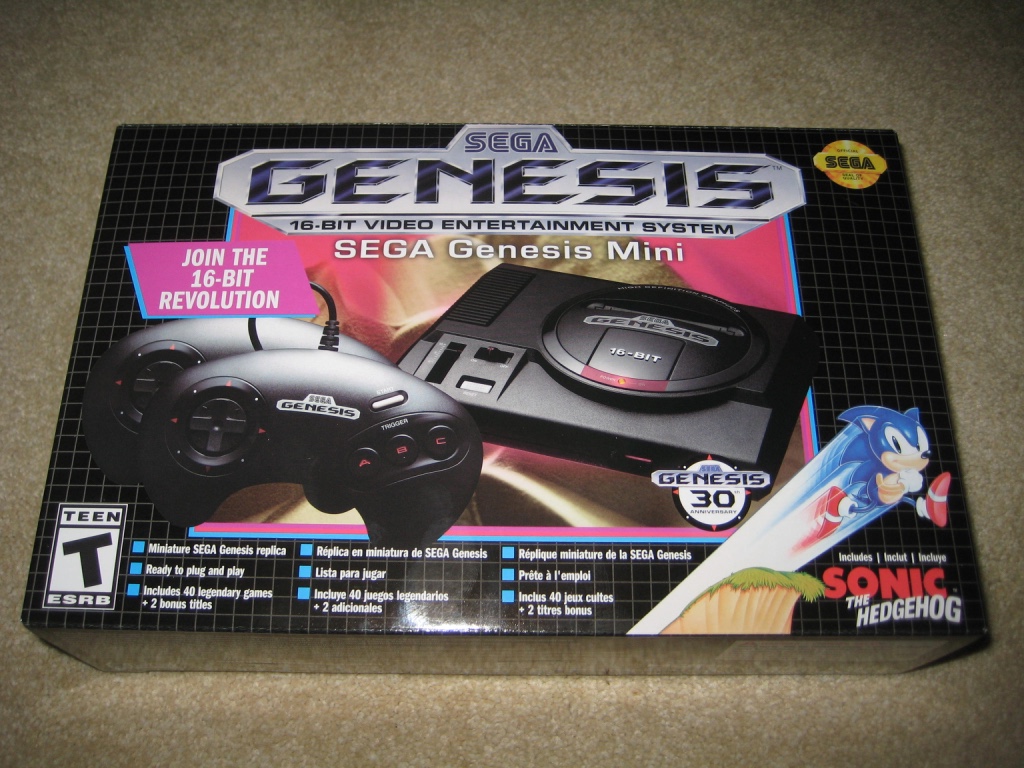 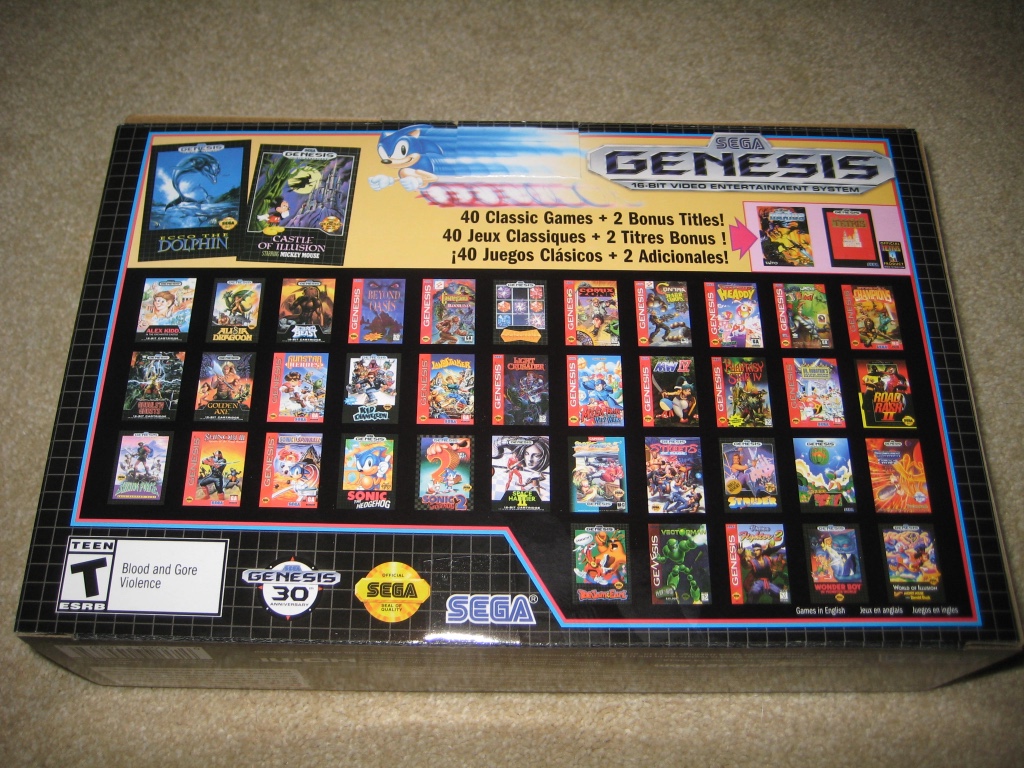 1/2020
If you grew up with a Sega Genesis and want like to relive the magic, the Sega Genesis Mini is the easiest way to do so. Unlike the original system this is tailor-made for high definition TVs. And if you think old 16-bit games are only good for nostalgia, think again my friend. This collection is chock full of first-rate titles that have aged like wine, and you could argue they look and play better than ever before.

The Genesis Mini is packaged in a handsome black box similar to that of my original Genesis (1991), albeit a fraction of the size. Likewise the system itself is a shrunk down replica, retaining that distinctively sleek 16-BIT design. While it measures only about 4 inches wide, the two three-button controllers are full-sized and very comfortable. I think they feel better than the original controllers! Granted, they are the three-button model which may hamper your ability to play certain titles like Street Fighter II. The system connects to your HDTV via HDMI cable (included) but it may take a few seconds to start up when you first turn it on so be patient. The front of the console has two functioning buttons - a power switch and a reset button. You can slide the volume switch but it doesn't do anything because there's no headphone jack. Likewise the little cartridge doors open but there's nothing in there. A little red light indicates the power is on. 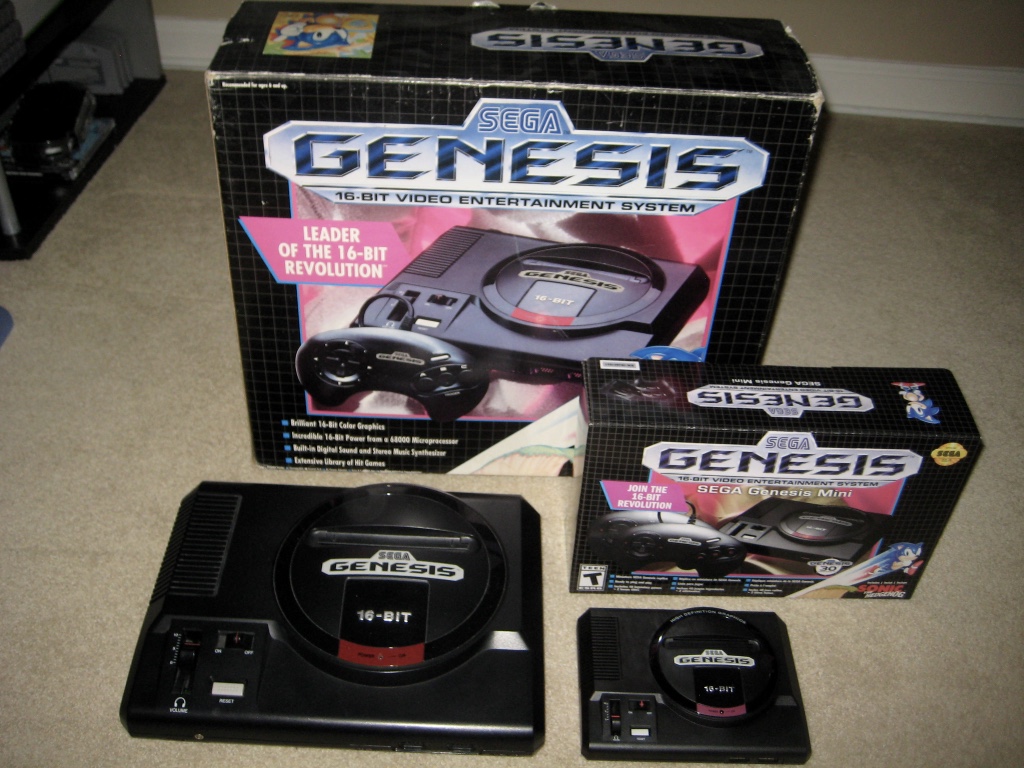 While the library of 42 built-in games is far from comprehensive, it does offer a pretty sweet cross-section of 16-bit genres. And if you think these 16-bit graphics haven't held up, wait until you witness the spectacular visual splendor of Vector Man or Comix Zone. Most of the included games were very popular in their day, but there are a few hidden gems and even a couple never-before-available titles. Sonic the Hedgehog 1 and 2 are the two headliners, but the third one is curiously not included - apparently due to some obscure licensing issues. Perhaps that explains why the original Road Rash and Streets of Rage games are missing as well. Upper tier titles include Altered Beast, Ghouls 'N Ghosts, Golden Axe, Castle of Illusion (starring Mickey Mouse), Strider, ToeJam and Earl, Streets of Rage 2, Road Rash II, and Earthworm Jim. Shooter fans get Contra Hard Corps, Thunder Force III, Gunstar Heroes (!), and Mini-exclusive Darius. If you like puzzles you'll find Columns, Dr. Robotnic's Mean Bean Machine, and a new version of Tetris (another exclusive). Monster World IV was released in 2012, so that might be considered new as well. There's a nice selection of role-playing games which is a big deal since the console saves state. RPGs include Shining Force, Phantasy Star IV, Beyond Oasis, Landstalker, and Light Crusader. Sports fans are left in the cold however, which is a shame because the Genesis was always a power-house in that department. 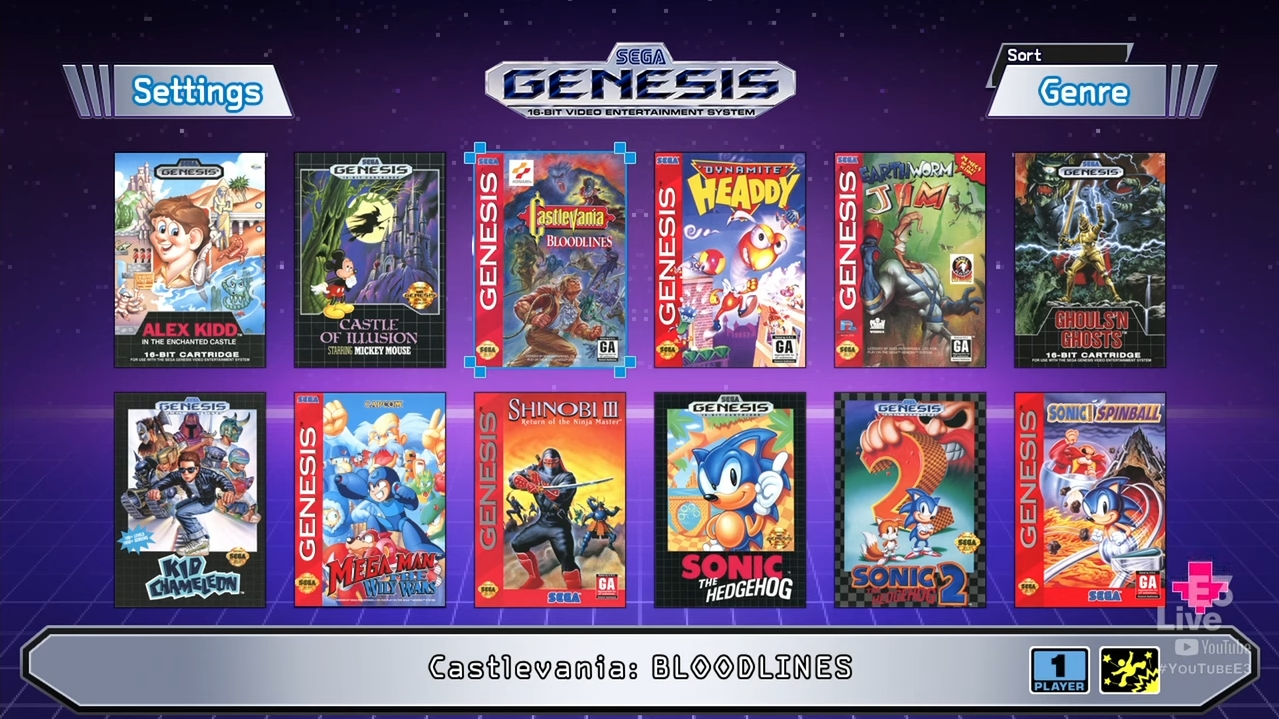 The game selection interface is a little touchy and doesn't provide much information outside a perfunctory description. To access the system menu while playing a game you hold in the Start button for a few seconds. It's clumsy but workable. The system menu provides four save slots per game. And while the system doesn't provide any overriding high score saving mechanism, most shooters retain their high scores so just use the same slot each time. The system menu also lets you return to the main menu so you can hop between games without leaving the comfort of your recliner. A settings menu lets you toggle between screen formats or add a CRT filter for more of an old-school vibe.

So how do the games play? Well obviously they are emulated but the quality is excellent. Unless you're playing the original Genesis on a regular basis (like me) you won't notice a few millisecond lag with the controls. Certainly nothing that will affect your ability to enjoy the games. What you may notice is a lack of "blast processing" in the Sonic games. They move fast but seem a step behind the originals. In terms of audio I occasionally hear a note slightly off-key but that's rare. The fact that the graphics and sound are so clear and crisp really makes up for any subtle variances. As for the manuals, a link is provided to where they can be found online.

Another interesting feature I glossed over the first time around was the language option on the settings menu. Changing this to Japanese not only changes the system menus but also transforms the games into their Japanese counterparts! This means new box art and even new titles in some cases. For example, Streets of Rage 2 becomes Bare Knuckle 2. I'm told that the Japanese versions of the games tend to have lower difficulty which some find appealing. Either way, this option gives you a whole new set of games to explore. Just note that once the menus change to Japanese, it might take a while to figure out how to change back to English!

I picked up my Genesis Mini at Best Buy for $59 which I consider a bargain. I have a huge Genesis game collection yet this provided me with several titles I didn't already own. The ability to save in progress really makes the RPGs a lot more attractive. Oh sure you can replace the batteries in your original RPG cartridges, but that's a project. Those looking for sports or movie tie-ins (like Batman) might be disappointed but if you just want to bask in the glow of 16-bit goodness, this little system will transport you back to a wonderful time in video game history. 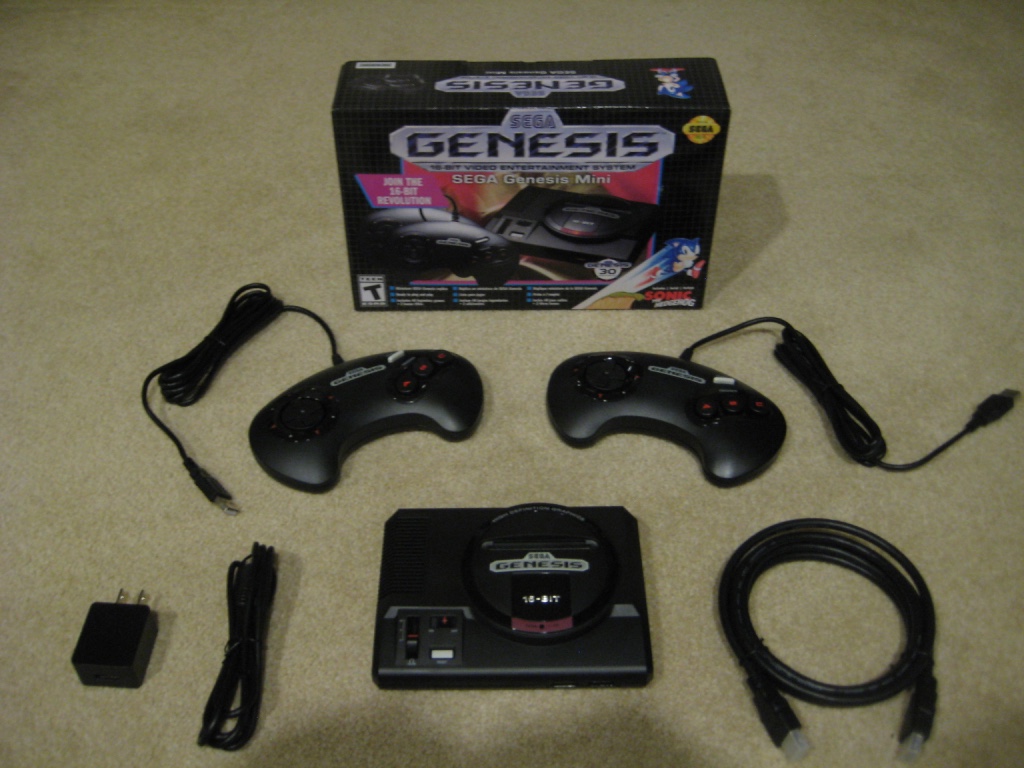