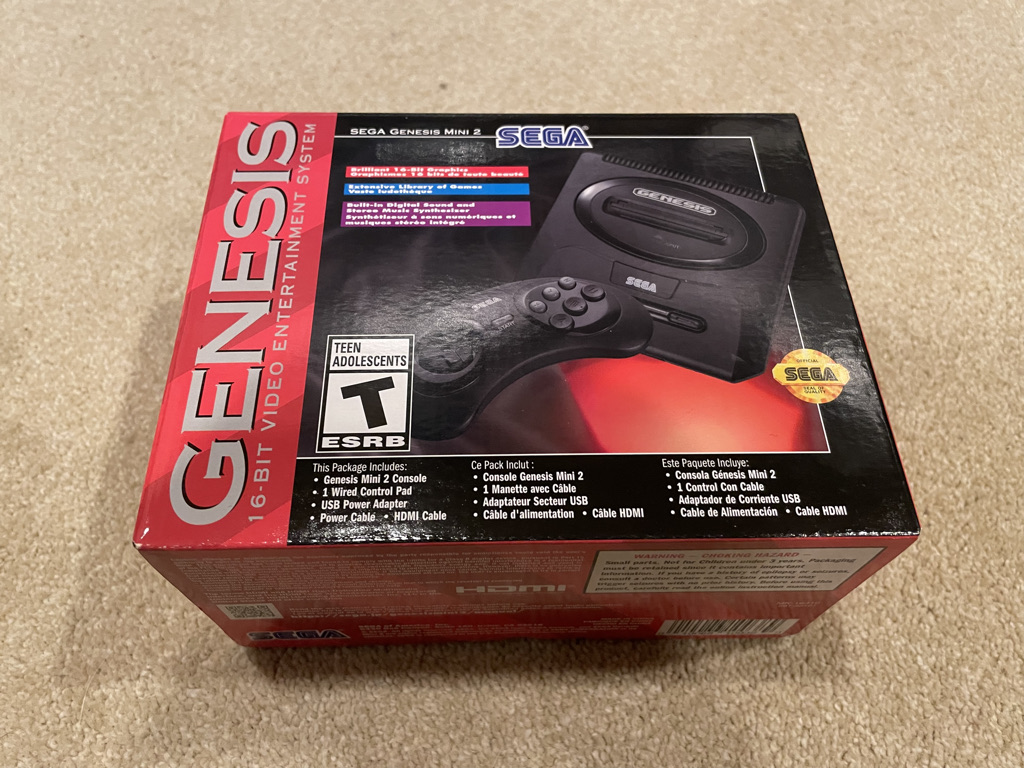 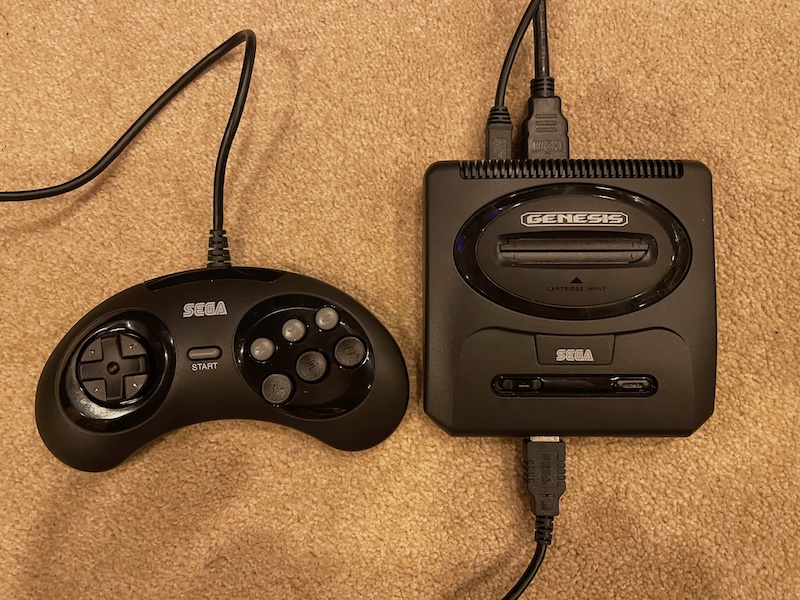 1/2023
Recent years have ushered in a wave of miniature classic consoles, and the original Genesis Mini (2020) was the cream of the crop. Now we get another wave of 16-bit goodness. Sega Genesis Mini 2 mimics the same streamlined look as the original Genesis model 2, except of course this one is tiny. When I received it in the mail, I was shocked that the box was only about five inches long. At least it's easy to set up. Plug in the power and hook up the HDMI and you're in business.

A six-button Genesis controller is included, but you only get one, sadly. It's light but well-constructed, and the texture feels so good. The "mode" shoulder button brings up the in-game menu, letting you record your progress or return to the main menu. No manuals are included, but Sega does make them available online. 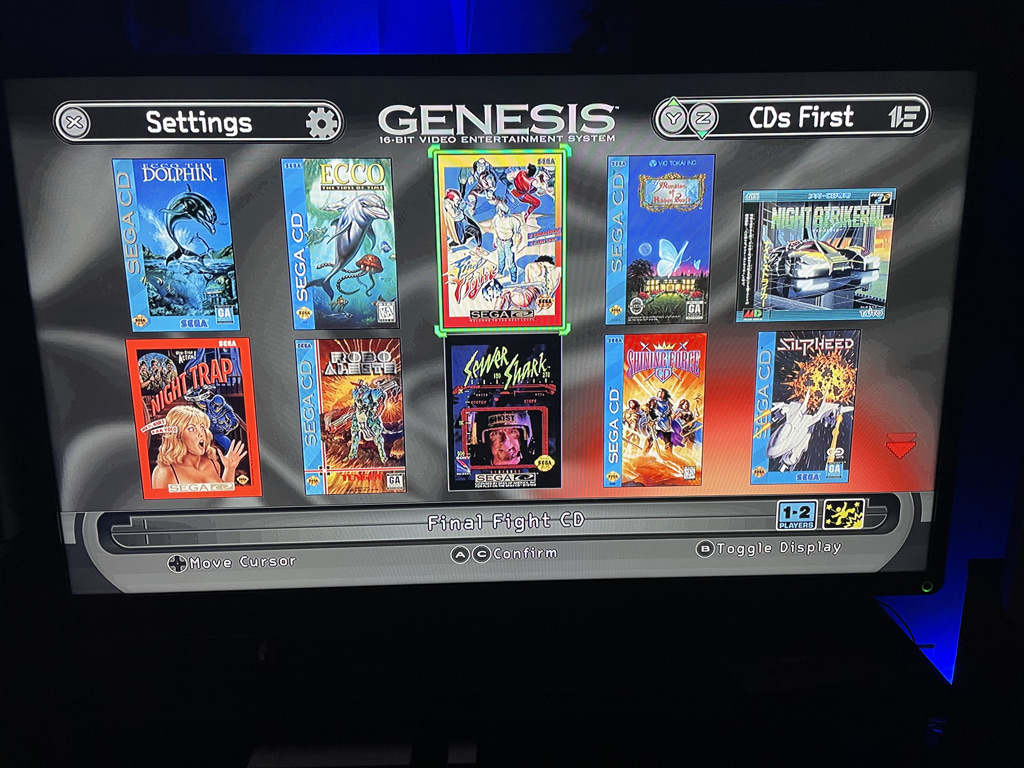 The main menu presents you with a tiled screen of alluring Genesis and Sega CD (!) box covers. You can also have them presented in a compact shelf view, with only their spines showing. The 53 games span every genre including racers, platformers, shooters, fighters, RPGs, full-motion video (FMV), and puzzle games. I also counted about nine titles not previously released in North America. 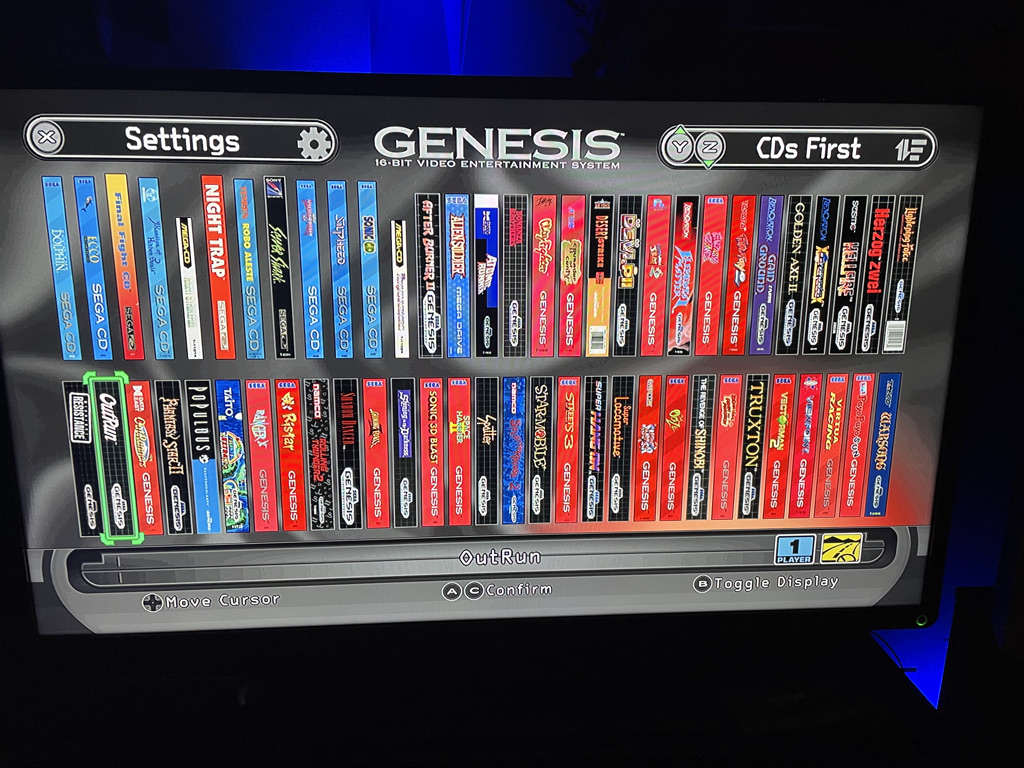 For my first game I couldn't resist Outrun, and sure enough this classic racer looks gorgeous in HD. Now only does the tropical scenery burst with color, but the scaling and animation is so smooth and the digital steering feels so good! Afterburner II and Space Harrier boast the same quality graphics and control, but beg the question: Why not the 32x versions? Could they be saving those for the Mini 3? 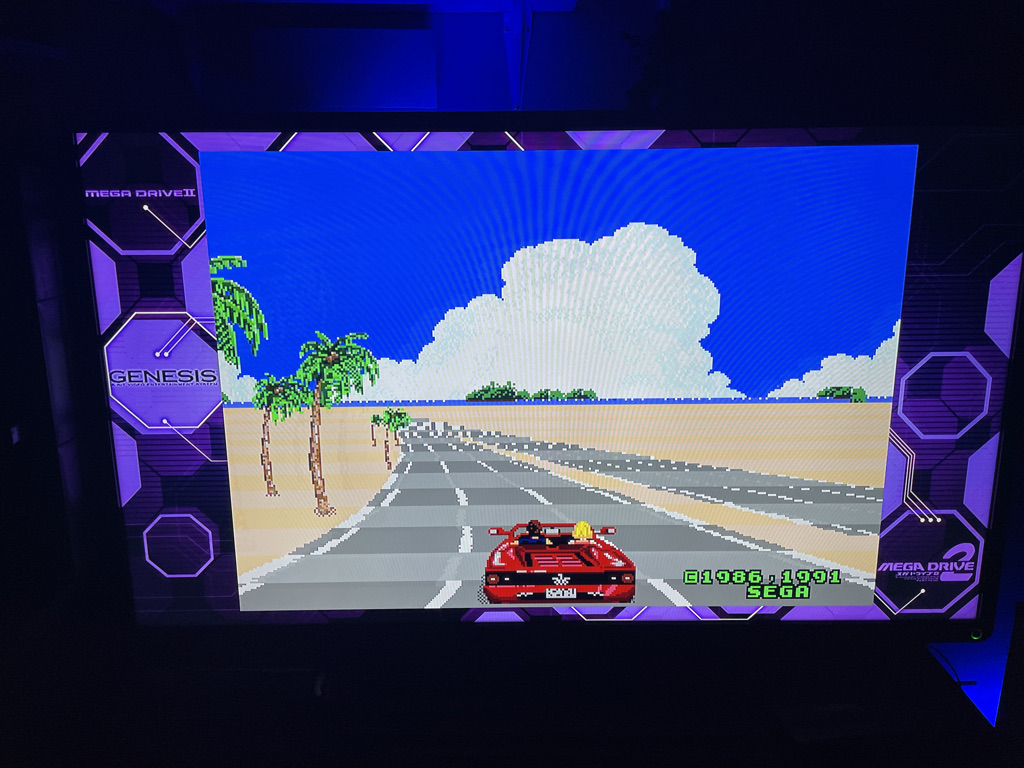 There's a lot to cover, so I'll try to give a brief synopsis of each game. Alien Soldier was previously available via the short-lived Sega channel. Developed by Treasure, this jaw-dropping shooter delivers rapid-fire action with huge characters. It's more sophisticated than most 16-bit shooters, offering plenty of weapons to experiment with. 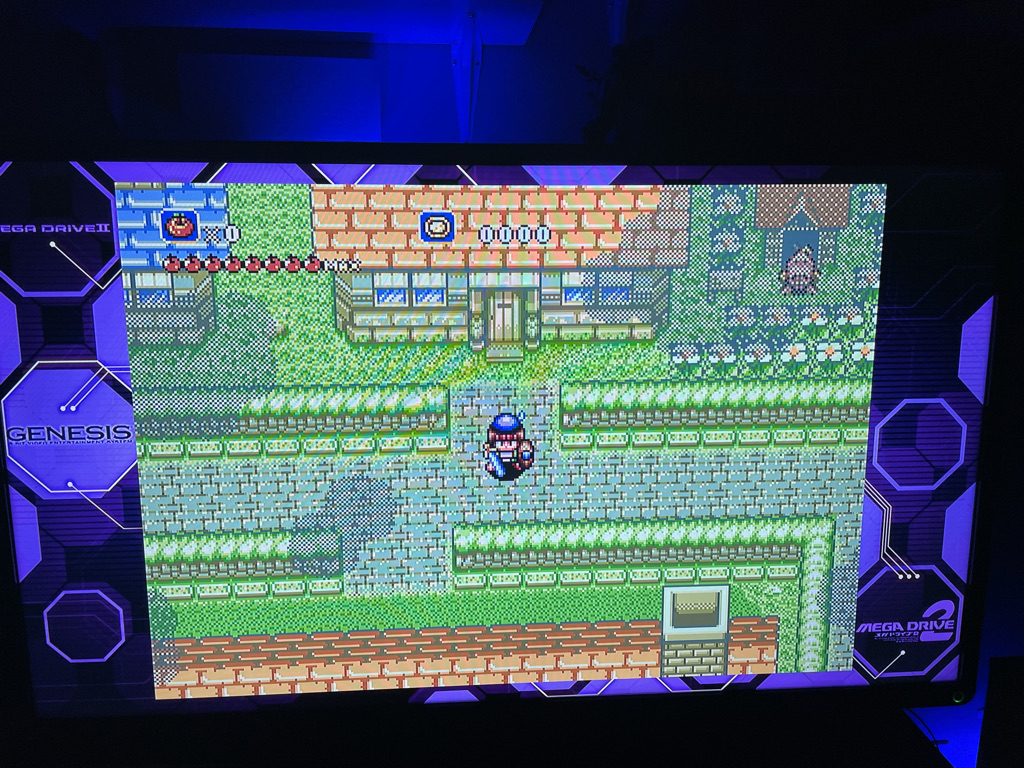 Atomic Runner is an obscure shooter with a frantic run-and-gun style. Bonanza Bros. is a quirky cops-and-robbers arcade romp. Clayfighter could be described as the claymation version of Street Fighter II, and what it lacks in play value it makes up for in novelty. Crusader of Centy is one of those RPGs that's become prohibitively expensive, and it looks impressive. 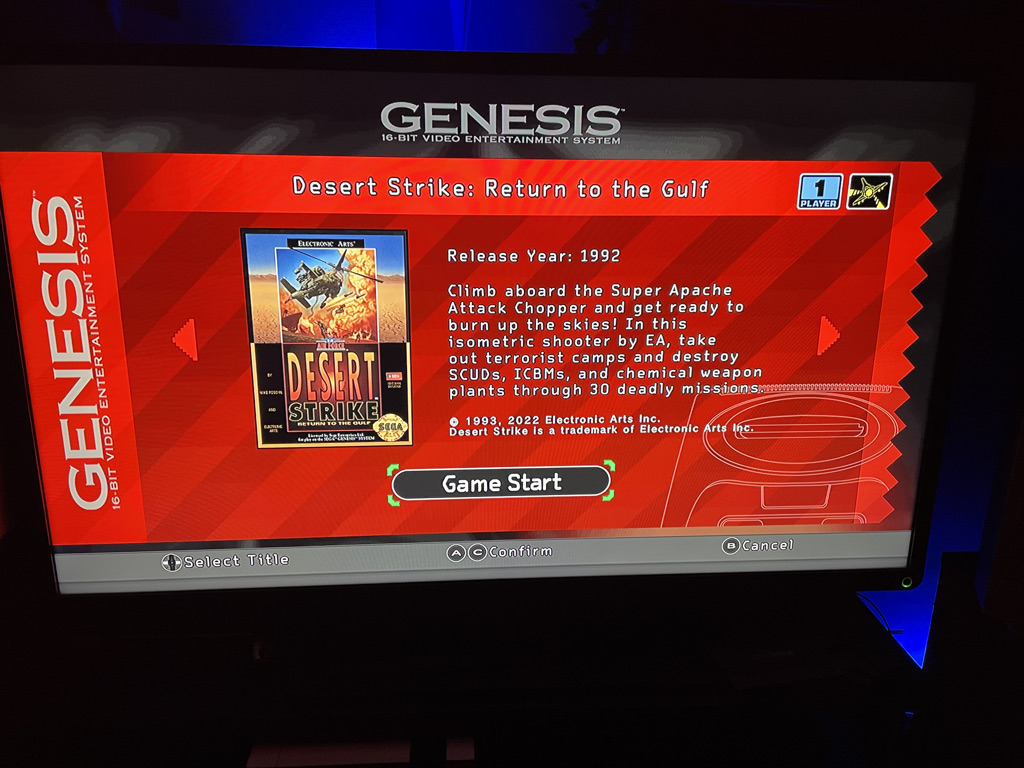 Desert Strike is an all-time great. Its military objectives, isometric view, and realistic explosions make it feel as if you're on a real covert mission! Devi & Pii is another previously-unreleased game. Programmed in 1993, it's a mediocre Breakout clone with cartoon graphics.

Earthworm Jim 2 was one of the darlings of the 16-bit era, combining state-of-the-art animation with zany characters and rapid-fire shooting. It's indisputably great. Elemental Master is a basic vertical shooter that's very difficult but equally addictive. Fantasy Zone is a whimsical side-scrolling shooter some may recall from the 8-bit Sega Master System era. Never before has it been available for the Genesis in North America, but I'm not sure it dramatically benefits from the 16-bit upgrade.

Fatal Fury 2 is the Genesis port of the popular Neo Geo one-on-one fighter. It's no Street Fighter II, but still very respectable. Gain Ground is a slow-moving tactical game and Herzog Zwei is a real-time strategy shooter. Both have built a cult following over the years.

Golden Axe II is a fine wizards-and-warriors beat-em-up for two players. Granadia X is an overhead tank shooter where you scour districts for enemies to vanquish. The fact that so few shooters adopt this approach helps this one stand out. Hellfire and Lightening Force are two stellar side-scrolling space shooters. Midnight Resistance is more of a Rambo-style, run-and-gun shooter. Outrunners is the mildly-entertaining split-screen sequel to Outrun.

Phantasy Star II represents Sega flagship RPG franchise and will keep you occupied for weeks on end. Populous is a sophisticated strategy game that lets you "play God". Rainbow Islands was an ill-advised Bubble Bobble sequel not previously available in North America. You fight enemies and climb the screen by creating little rainbows. Ranger X is a chaotic side-scrolling shooter with exceptional graphics. Ristar is a colorful but confusing platformer starring a star-shaped character who grabs stuff. Did I just hurt that monster or did he hurt me? 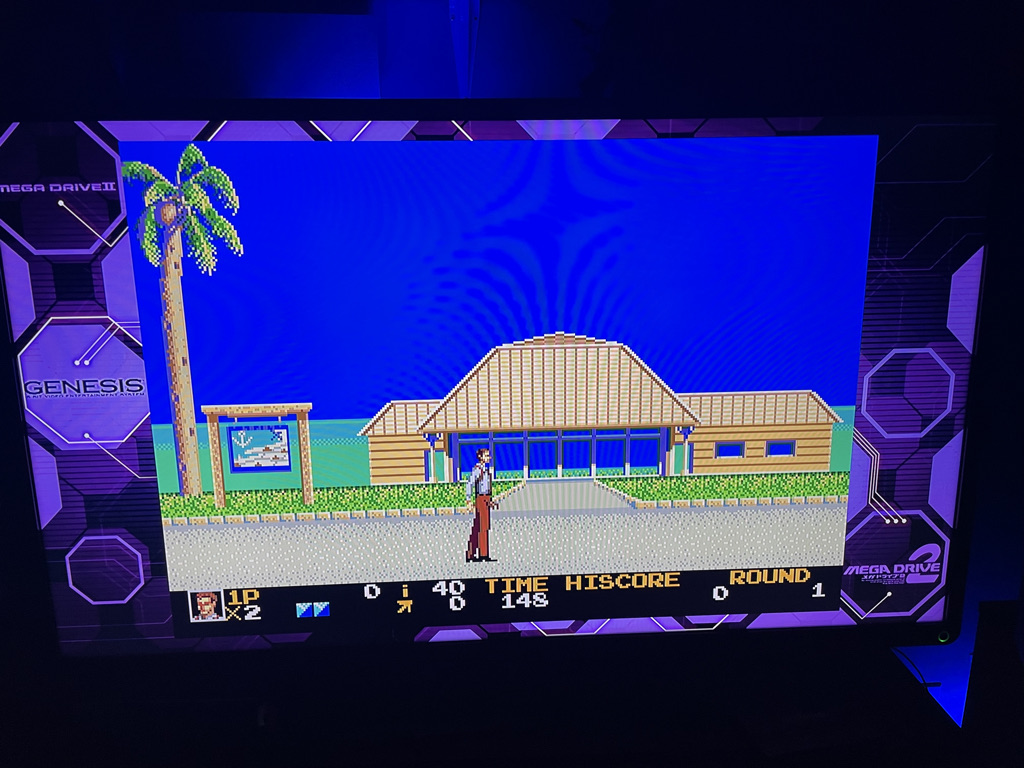 Rolling Thunder 2 is a side-scrolling police shooter with spectacular tropical resort eye candy. Revenge of Shinobi is a solid ninja adventure that really represents the height of the genre. Shadow Dancer is a more tactical version of Shinobi. You have a dog by your side you can send in to distract an enemy hiding behind a shield or whatever. It's slower but just as satisfying.

Shining Force II is another acclaimed RPG. Shining in the Darkness is some kind of first-person adventure I've been meaning to play for about 30 years. Maybe this is the year! Sonic 3D Blast was Sonic's initial foray into 3D and the results are mixed. It boasts some slick 3D graphics but lacks that speed and reckless abandon that marked the 2D games. Slippery controls and so-so music also keep a lid on the fun. 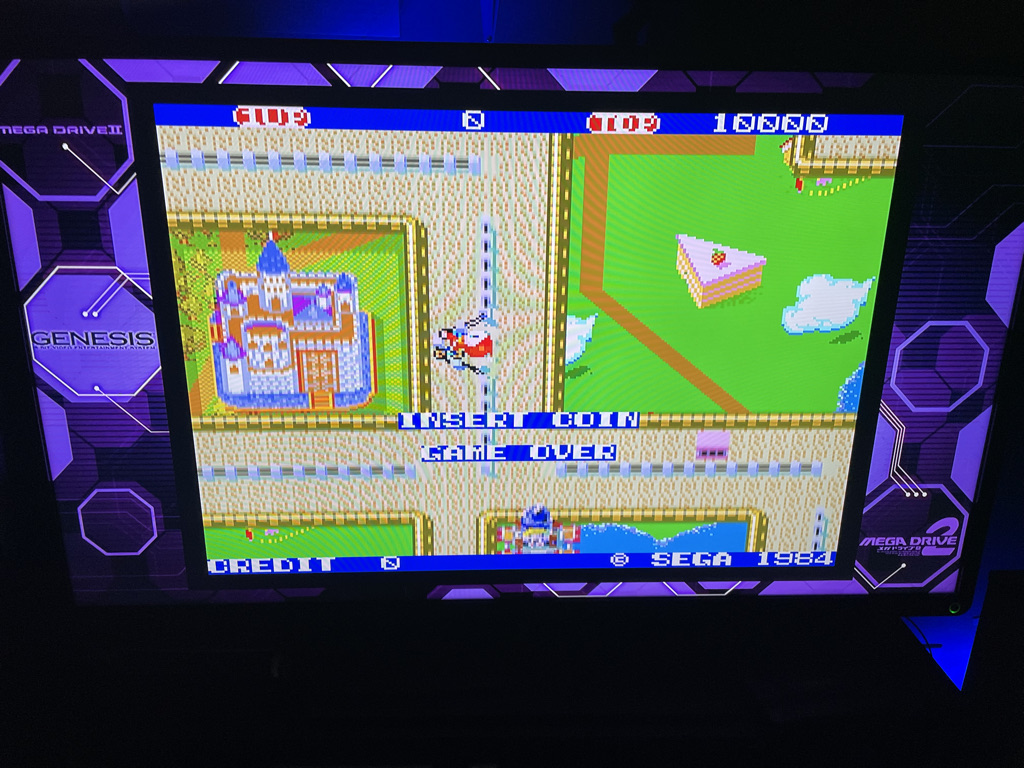 Spatter is another new game. You're a kid on a tricycle moving around an elevated maze, performing little acrobatic tricks to evade pursuers while gathering flowers. This game is super cute and surprisingly enjoyable. Splatterhouse 2 is a superb horror side-scroller where you brutally bludgeon ghouls that spurt green blood. Star Mobile is a 30-year-old puzzle game that looks ingenious in design. Apparently you're supposed to catch stars on an elaborate scale.

Streets of Rage 3 is the last Genesis edition of the side-scrolling beat-em-up dynasty. Super Hang On is a motorcycle racer that's a bit slow and laggy. Super Locomotive sports a copyright of 1982, indicating it's probably an old arcade game. The action is largely limited to the top half of the screen as you guide a locomotive along tracks that fork all over the place, trying to collect items and shooting down planes. A manual would have been nice. 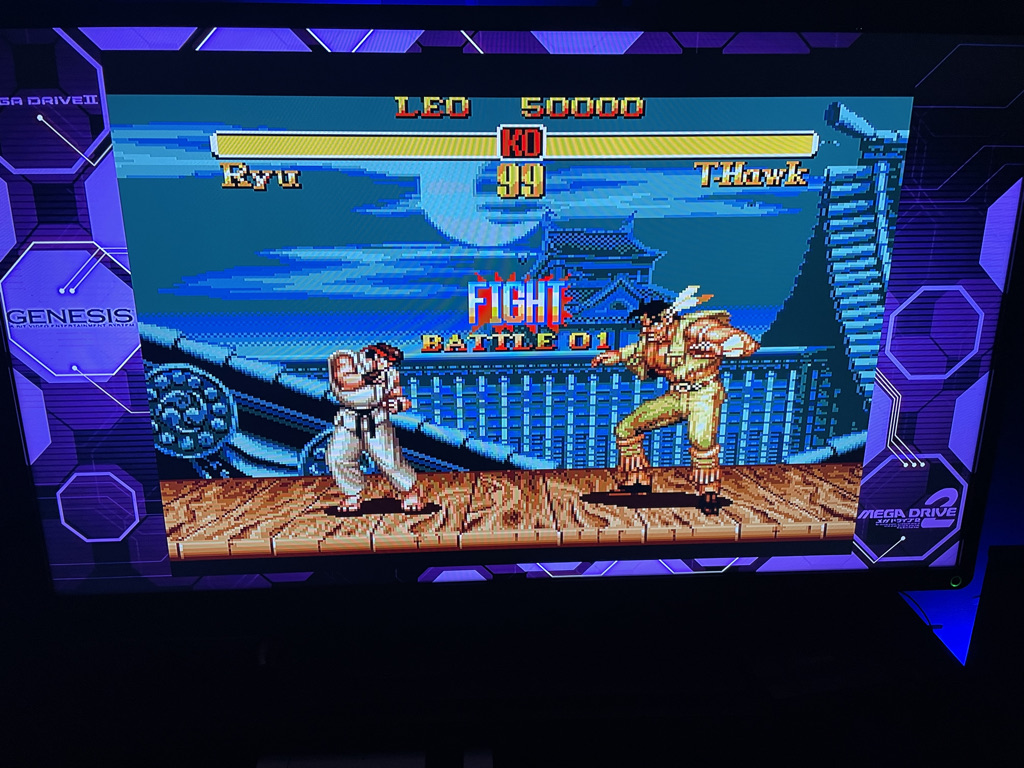 Perhaps the biggest coup of this entire collection is Capcom's Super Street Fighter II: The Challengers. It's the ultimate Street Fighter game for the Genesis. Good thing this system comes with a six button controller so you can play it as God intended. The audio is a bit scratchy but the action is superb.

The Ooze is one of those late-arriving Genesis games that never quite gelled. ToeJam and Earl in Panic on Funkotron is the ultimate buddy co-op title, boasting split-screen and a bizarre sense of humor. Truxton is a tremendous vertical space shooter; the kind I live for really. Vectorman 2 was one of those late-arrived games that pushed the limits of the Genesis hardware, delivering a truly sublime platform-shooter experience. 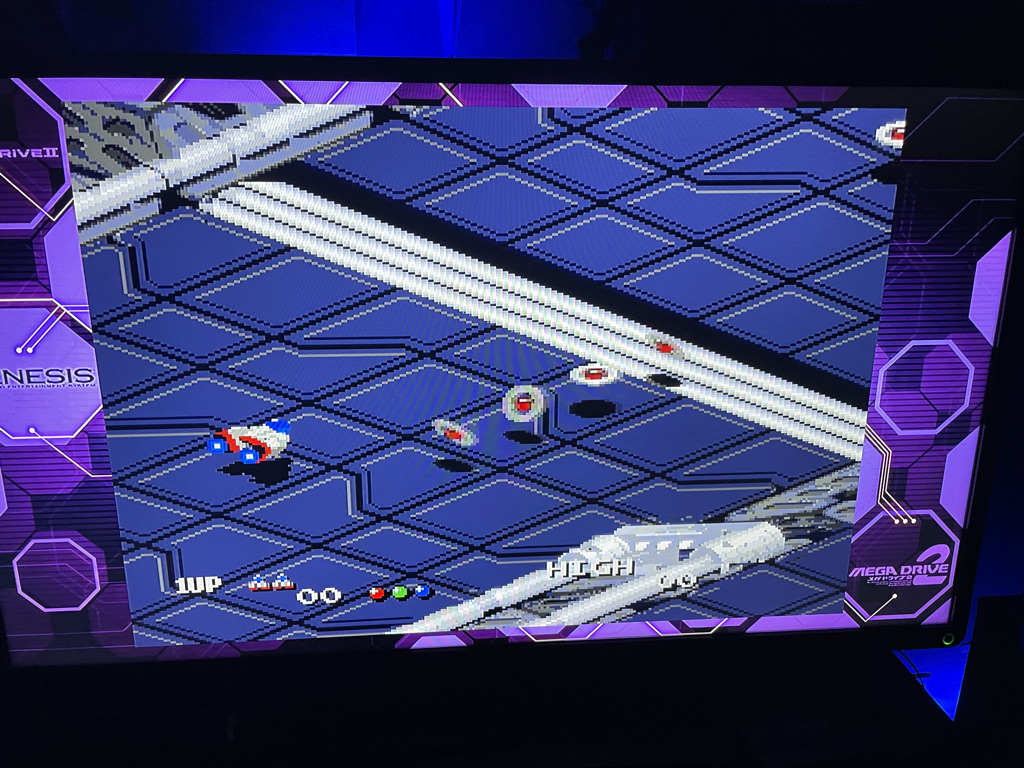 Viewpoint was an ambitious isometric shooter ported over from the Neo Geo. All things considered, it's pretty amazing. Virtua Racer was originally an infamous $100 cart, packed with a special chip to allow the game to render 3D polygon graphics. In my mind, it is a thing of beauty, combining smooth polygon action with charming old-school pixelation. 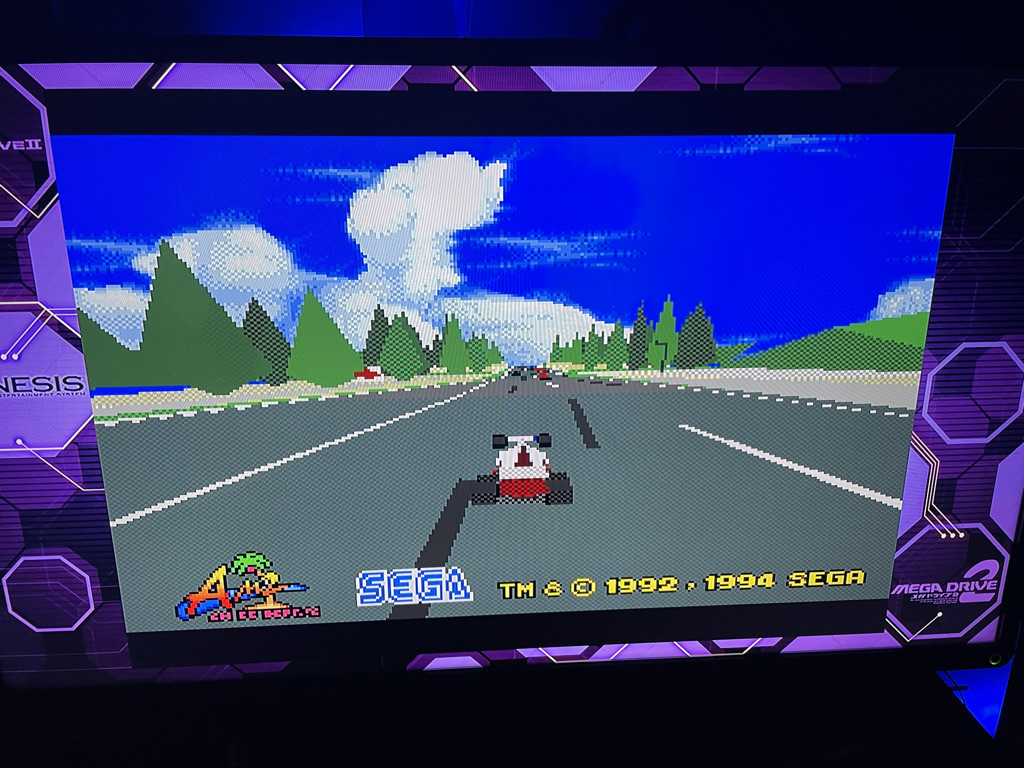 Vs Puyo Puyo Sun is the Genesis version of the long-running puzzle series. By stacking colored beans you can initiate some really cool combos - usually by accident. Whenever you do, some school girl jumps in and starts yelling stuff. Warsong is a medieval strategy game that looks to have a lot of potential, if one were to sit down long enough to figure it out! 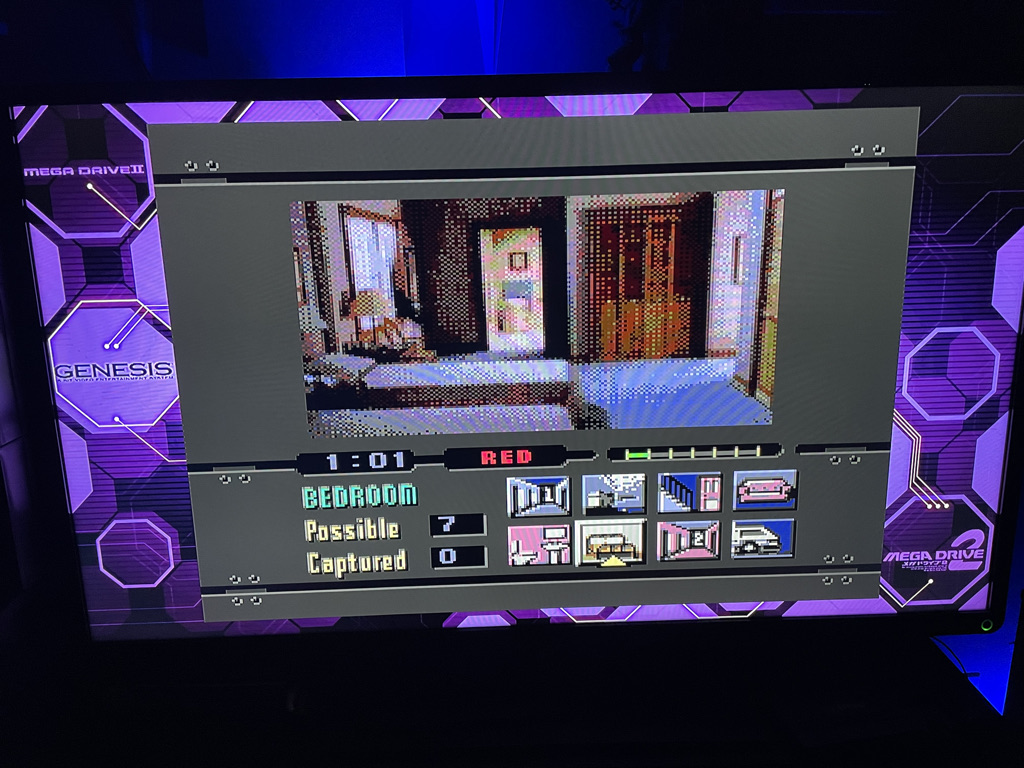 Last but not least, the system contains a dozen Sega CD titles! Most notable is Night Trap, the original full-motion video (FMV) title where you toggle between cameras in a house while triggering traps. I expected it to look better; I think the extreme clarity tends to accentuate the pixelation. Sonic CD fares better and I love the clarity of that catchy Sonic Boom theme song. Its time-travel gameplay is confusing but its colorful graphics dazzle.

The two Ecco games are the Sega CD versions, giving them higher fidelity music. Ecco the Dolphin was Sega's attempt at a non-violent video game, and it went over very well thanks to its smooth animation and rich coral reef visuals. These also sport some remarkable water effects.

Mansion of Hidden Souls is a haunting mystery game that takes advantage of the system with pre-rendered digitized graphics and some really bad voice acting. It's not particularly scary but fascinating nonetheless. 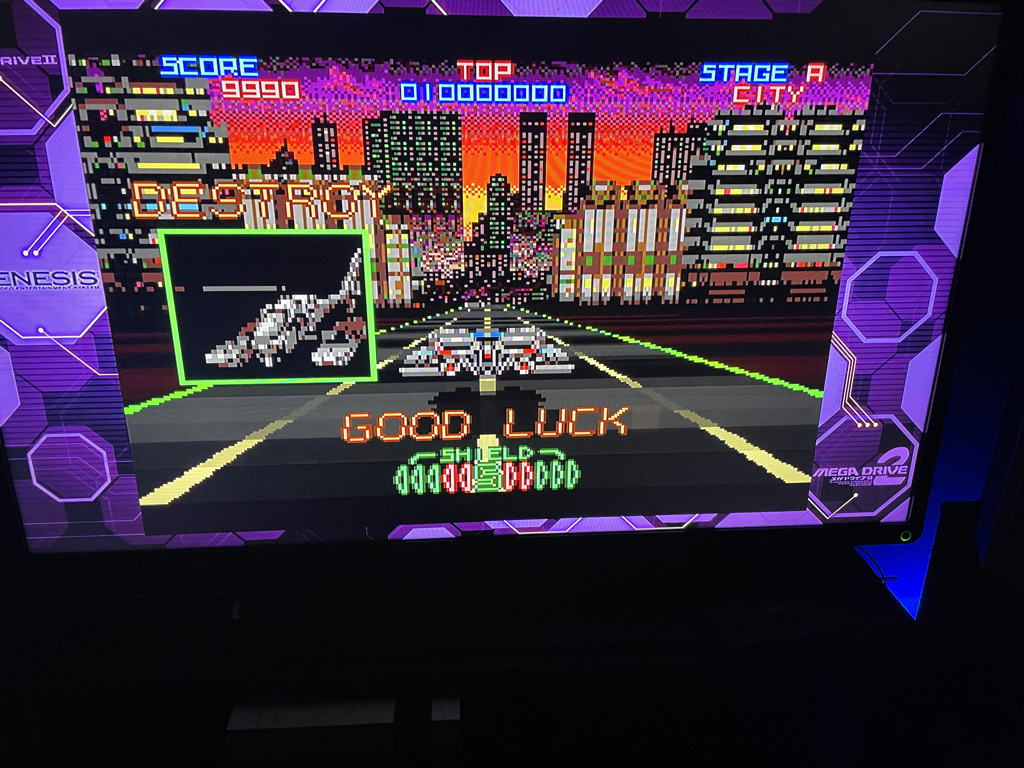 Night Striker is yet another "first time in America" game. A blend of Outrun and Space Harrier, you're blasting ships while zooming through futuristic cities at night. I typically love old-school, pixelated graphics, but in this case it's just too much. You can't tell what's going on.

Sewer Shark was the original Sega CD pack-in title, and if you can stomach the pixelated full motion video, this on-rails shooter is pretty fun. Final Fight CD is a sensational port of the arcade side-scrolling beat-em-up. Robo Aleste's inclusion makes the Mini 2 a total steal. Not just a first-rate vertical shooter, this is one of the most sought-after titles for the system.

Shining Force CD is another one of those rare RPGs games that would otherwise cost you a small fortune to acquire. Silpheed is a name that should bring a smile to old Sega CD owners. It's a highly-playable old school shooter with awesome pre-rendered backdrops. I'm really glad it made the cut. Ninja Warriors is a side-scroller I previously reviewed for the PC Engine, but this version boasts much better audio.

In some cases you can select between different versions of games, for example the US or European version of Sonic CD. In the case of Truxton, you can choose an alternate arcade soundtrack. 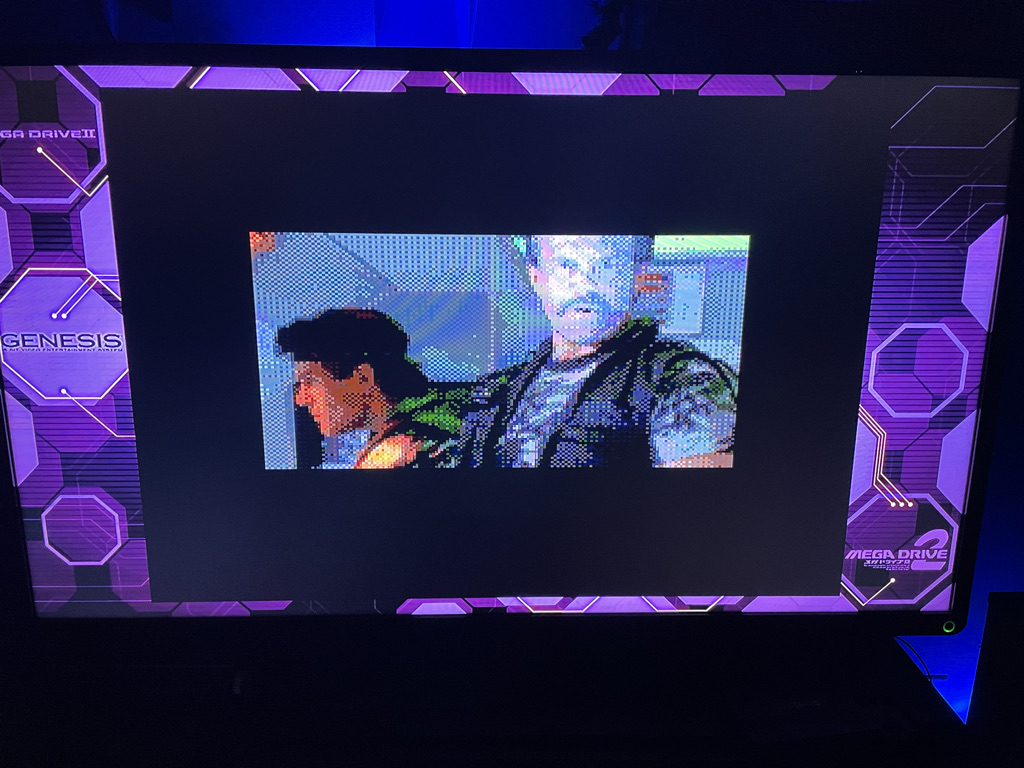 What more can I say? The Sega Genesis Mini 2 is an incredible value. Trying to obtain these games along with the proper hardware to run them would easily cost thousands of dollars. Here you get an entire classic collection at your fingertips, and with all the modern conveniences. And don't sell these old 16-bit games short! Once you start sampling them, you'll find the hours just melt away.