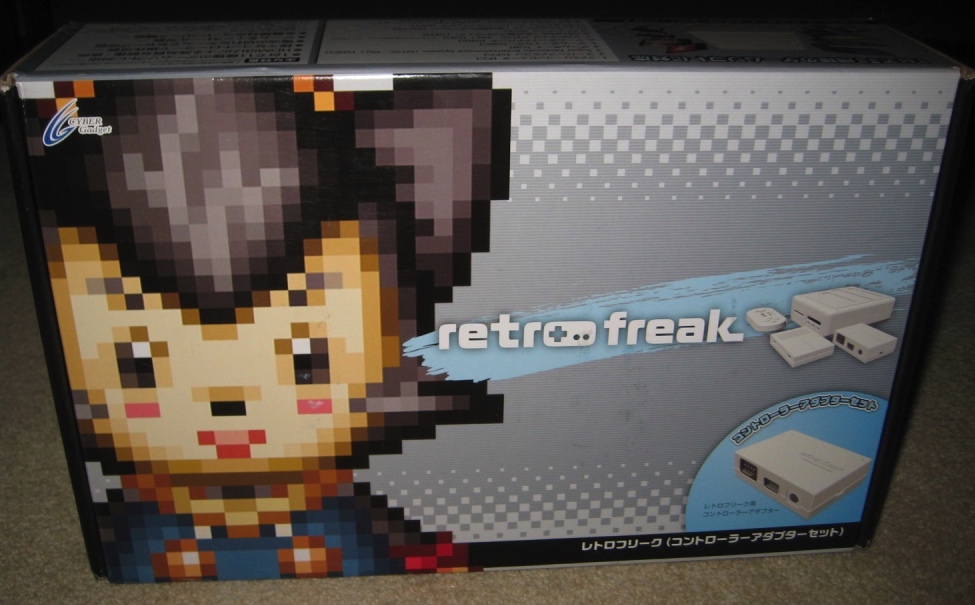 10/8/2017
Last year I purchased a Japanese copy of Ghouls 'N Ghosts (aka Daimakaimura) off Ebay thinking it would run on my Turbografx or Turbo Duo. Sadly, I discovered that this pricey title would only run on an obscure Japanese system called the Supergrafx. This failed "successor" to the Turbografx/PC Engine only had a handful of titles produced for it. I couldn't justify acquiring the system for a single game, so Ghouls 'N Ghosts sat on my shelf.

Then I heard about the Retro Freak console. Much like Hyperkin's Retron series of emulation systems, this little box lets you play console games from a variety of classic consoles - including the SuperGrafx! Unlike the Retron 5, it supports the entire line of Turbografx/PC Engine HuCards. Like the Retron 5, it rips the games off their cartridges (or cards) and displays them to your high-def TV via an HDMI cable. 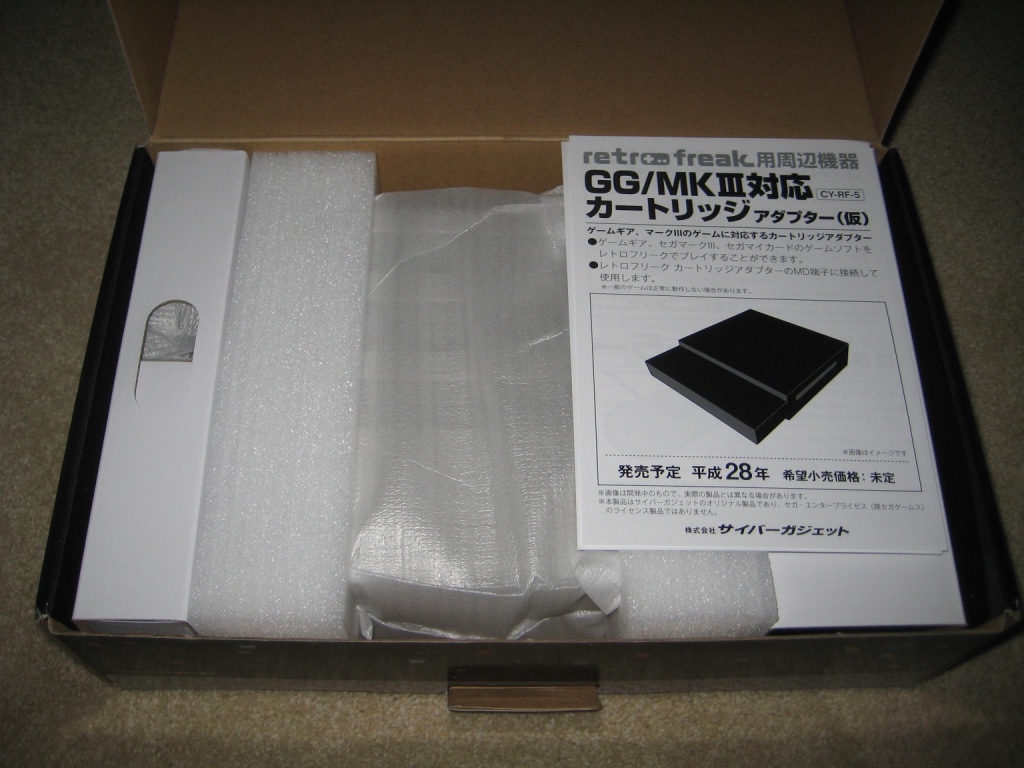 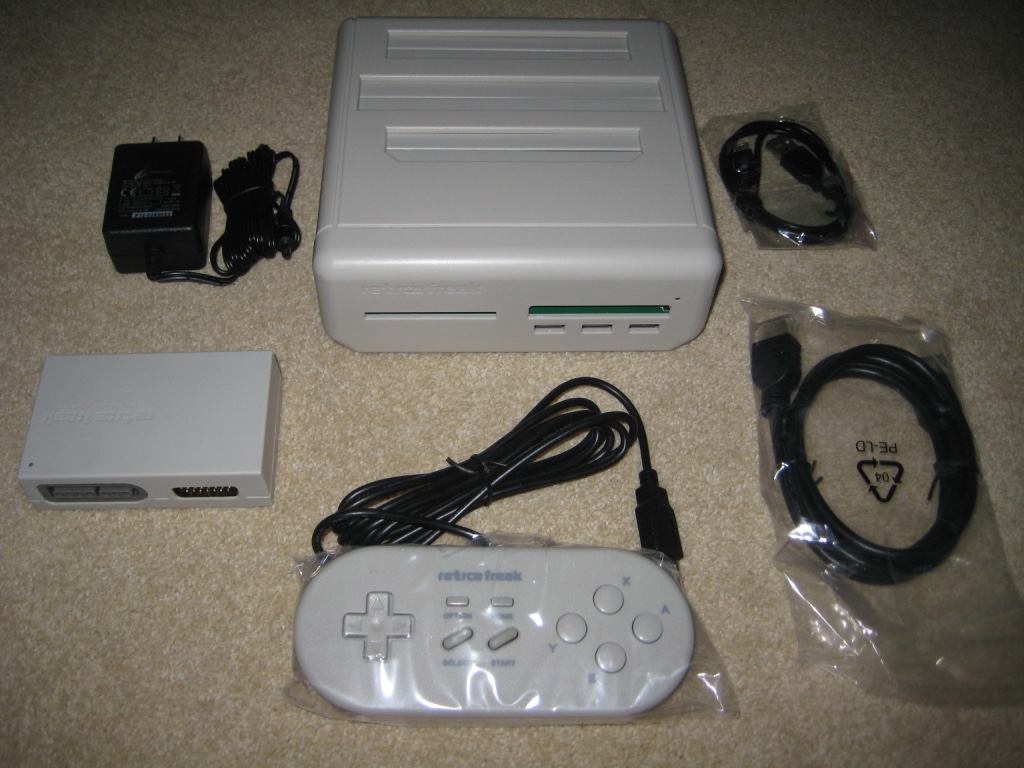 I was in for a long wait. By the summer of 2017 the region-free version was still unavailable. That's when I breached the subject to the knowledgeable members of the VGC forums. I was informed that the Japanese model was the same as the region-free model, except cheaper and without the NES adapter which can be obtained separately. I decided to take the plunge.

I ordered the Retro Freak from Amazon for about $180 and was surprised when it arrived on my doorstep. Instead of being packaged in a cardboard box, the Retro Freak was sitting there "naked" with an address sticker slapped across the front! Being a collector I was mortified. Had I not been able to remove that sticker cleanly, there would have been hell to pay.

I opened the box to find a tiny, lightweight white console measuring approximately 6.5 x 6.5 inches. The included controller features the classic SNES design. It feels familiar and comfortable, but very lightweight and a little cheap. The power button is a tiny little nub on the back. Along the front are 3 USB ports, one for the included controller and two for controller adapters. An HDMI cable is included but at three feet it's probably too short for most people.

The system comes with one controller adapter. This is a small box with plugs for the Genesis, SNES, NES, Turbografx, and some "Famicom expansion" port. I like how its wire is a few feet long, extending the range of your actual controllers. The problem is, you only get one adapter box, so you're limited to one-player action. I assume you can purchase a second, but these were not readily available at the time of this writing. 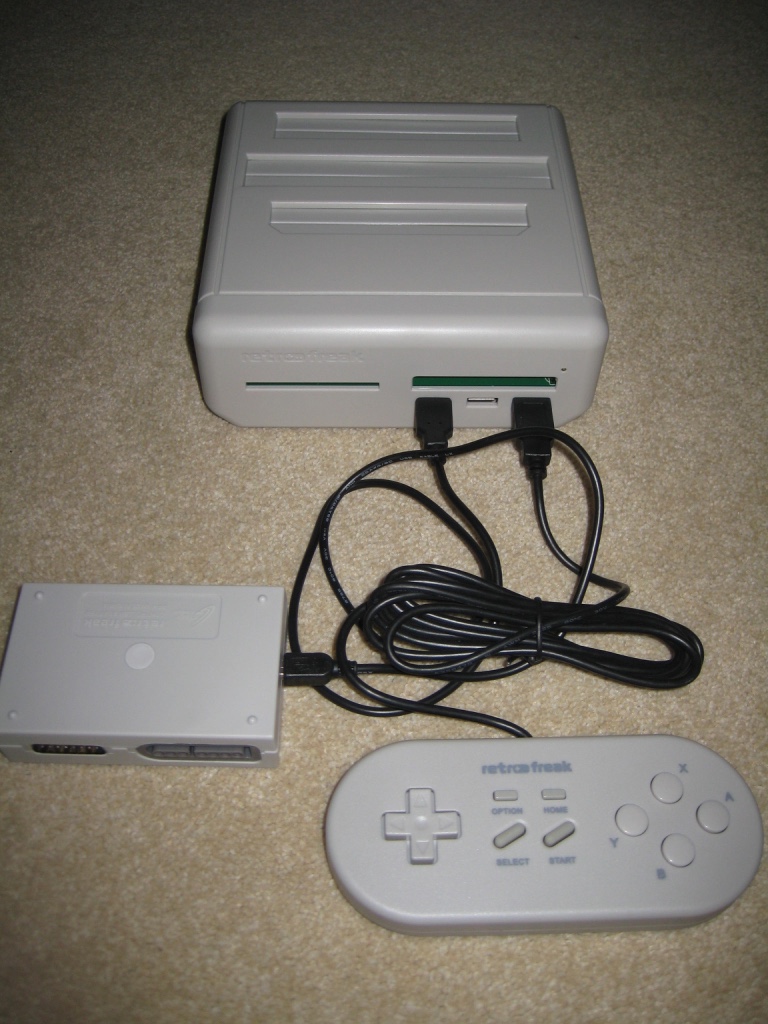 Compared to the Retron 5 configuration nightmare, setting up the Retro Freak is a breeze. The included controller is wired so no need to charge up anything ahead of time. I turned on the system via the tiny power button in the rear and was prompted for my language preference. Then I adjusted the display to fit my screen. When the system prompted me to install an "update" for the controller adapter I got a little nervous. I reluctantly said "yes" and it installed instantly without any hassle. *Whew!* 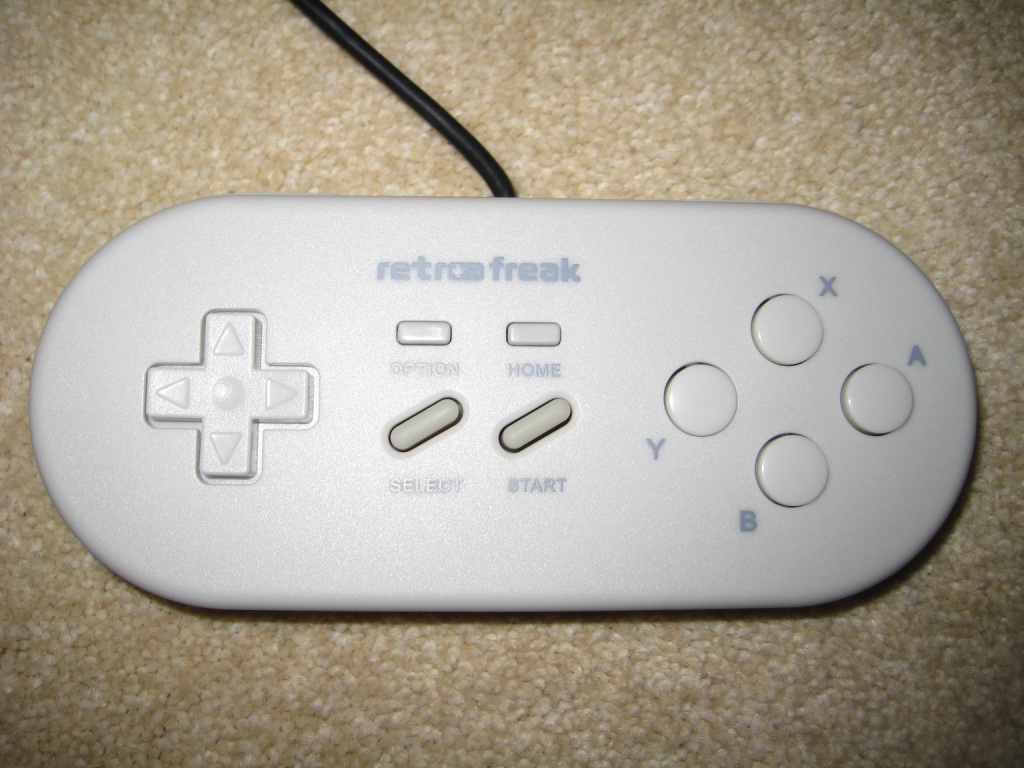 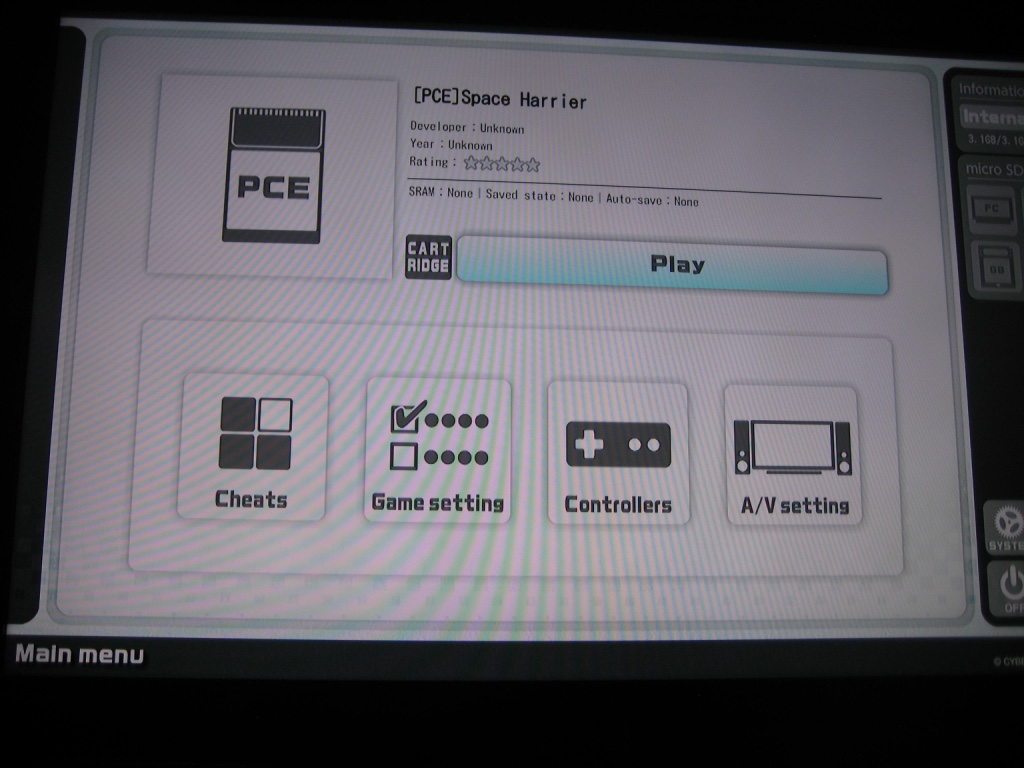 The first game I tried was Space Harrier for the Turbografx. The system slurped up the code and immediately presented the game in brilliant high definition. Sweet! The graphics look so crisp and the action is fast and smooth. The controls feel great with no discernible lag.

Next up was my precious Ghouls 'N Ghosts - a game I waited over a year to play! Once again, loading it up was a cinch. The game itself doesn't look dramatically different from the Genesis game, but under closer scrutiny there is more detail and subtle gameplay improvements. It's probably the definitive version of the game and I'm really happy with it. 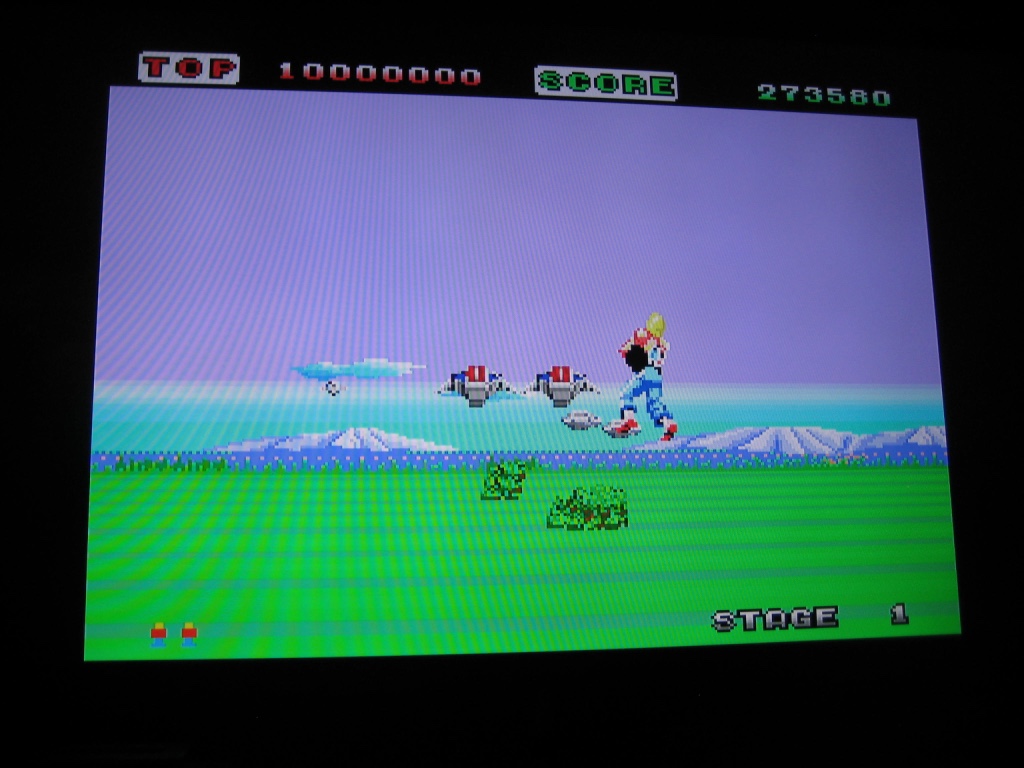 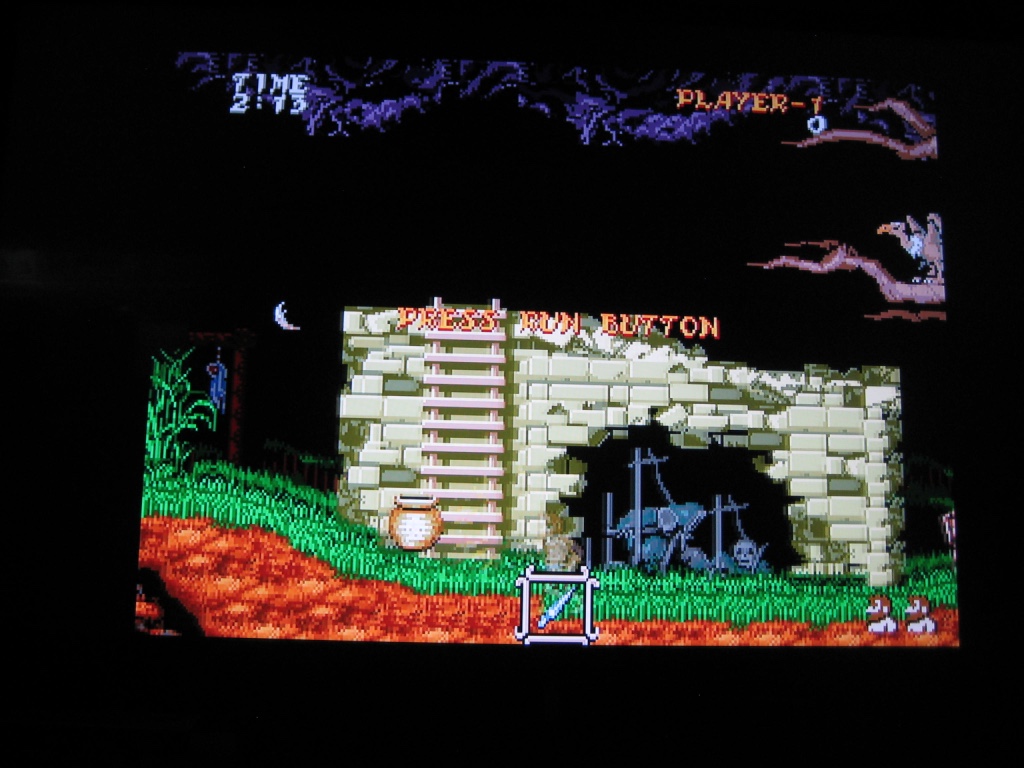 I tested other games from a variety of systems, particularly the Genesis and Super Nintendo. I find it odd how the Genesis cartridge slot is rectangular, although the carts are curved. I'm happy to report Sonic the Hedgehog (Genesis) exhibits none of the slowness I saw on the Retron 5. Defender/Joust (Game Boy) looks fantastic and plays great. The SNES cartridge slot feels a little loose but works fine. I noticed that the slowdown in Super Ghouls and Ghosts is completely intact, leading me to the believe the emulation is quite faithful (flaws and all).

I did encounter a problem playing Demon's Crest (SNES) in that system basically rebooted while I was playing it. I don't know the reason exactly (could be a glitch in the software) but I did notice the system was running a little hot. Not sure if it overheated, but after that incident I decided to keep the system off the carpet just in case.

Like the SNES cartridge slot, certain controller ports (like the Genesis) feel a little loose. If you jostle the thing you might lose control and need to reconnect. Details like these lead me to believe that perhaps the Retro Freak was not produced to the highest quality standards. That said, I don't regret buying it. Just being able to play my Turbografx games in HD makes it a worthwhile investment

In terms of customization features, they are all here. You can save game state at any time, and with 3.1 GB of internal storage, you probably won't need that optional SD card anytime soon. You can adjust the display to any dimension and applying filtering and scanline effects. You can map the buttons and initiate rapid-fire. The options just go on and on.

The Retron 5 and Retro Freak are comparable systems with a lot of overlap. If you want to play Turbografx, the Retro Freak is your clear choice. If you want to play two-player, the Retron 5 may make more sense. The Retro Freak has a clear edge in terms of the ease of use, with a clean interface and comfortable controller. Still, it feels a little cheap. The Retron 5 is larger, more attractive, and feels heavy duty. It's a tough decision, but once you see those classic pixelated images on your big screen TV, you'll know it was worth it.

After a few overheating incidents I did a little research and discovered a system update may in fact fix this issue. Performing an update on my Retro Freak was even worse that the Retron 5. In order to upgrade to the latest version (2.5), I had to first upgrade my current 1.4 version to 1.5. So I had to perform two rounds of moving files between my Retro Freak and computer.

Making matters worse was the fact the the Retro Freak uses micro SD cards. I had never heard of these, so had to purchase one off Amazon (it can with an SD card adapter thank goodness). Did somebody really think normal SD cards were too small? These micro cards are the size of my pinky fingernail! You could inhale one of these things if you're not careful.

Anyway, I managed to get through the whole process but wanted to update this review, since updating the firmware in the Retro Freak is just as aggravating as the Retron 5. I just hope it will resolve my overheating issues.