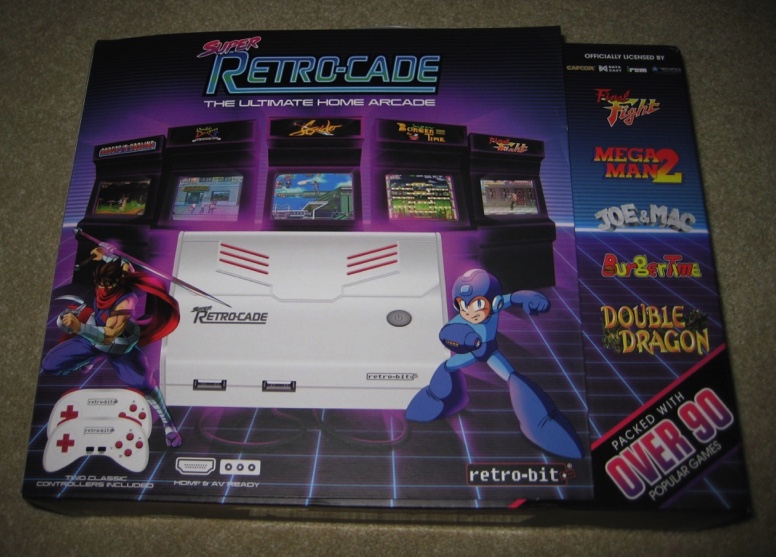 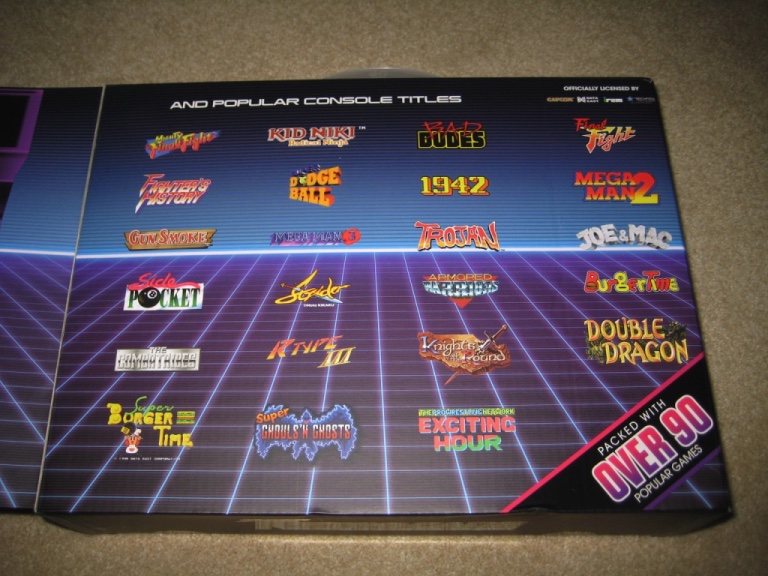 2/4/2018
I thought last year's Retro-Bit Generations was a pretty good value with its 48 built-in games, but it has nothing on the Super Retrocade. This tiny box packs a wallop with 90 quality titles for the cost of one full-priced game!

The Super Retrocade is so easy to set up I couldn't believe it. You plug in the small AC supply and hook up the HDMI cable to your TV. Make sure the other end of the HDMI cable is pushed all the way into the back of the Retrocade. Hit the red power button and you have your very own old-school arcade. No set-up screens or anything like that. 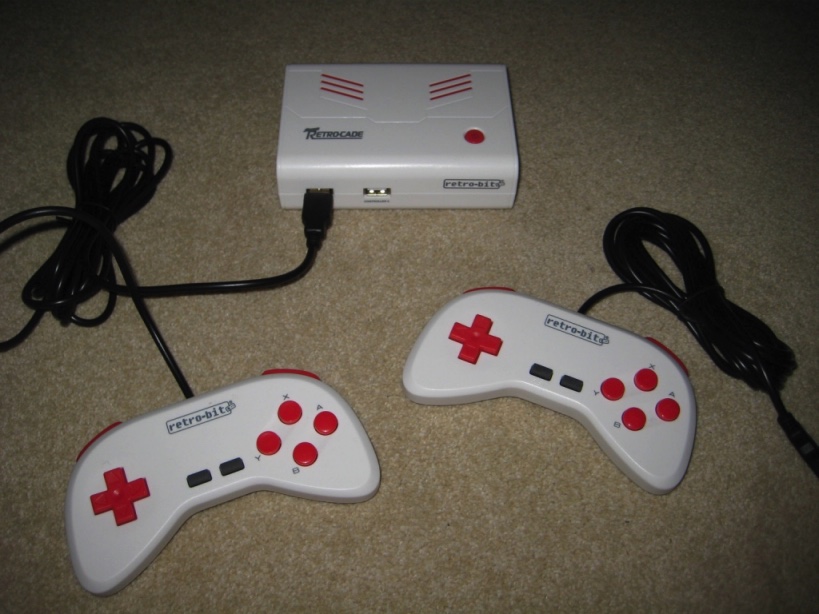 The tiled game menu is easy to peruse, but you can also sort the games in a number of ways including by favorites, genre, or system. The first game I tried was 1942, and I was surprised to see it fill up my entire screen. Fortunately the system allows you to select the "original size" video format. 1942 looks and plays so much better in its proper vertical format. In fact, I'd advise you to set all of the games to their original format, even if they only consume 1/3 of your HDTV.

The black controllers packed with last year's Retro-Bit Generations were inspired by the Genesis, but the new white Super Retrocade models have a distinctive SNES influence, with the "diamond" button configuration and two shoulder buttons. The controller wires are a generous length - about nine feet. The controls are responsive but I did notice a slight lag during some of the fast-action shooters like 1942 or Cobra Command. This is to be expected when running an emulated system an HDTV. It really depends on the game and I suspect most people won't even notice.

The system contains a mixture of arcade games and console titles. For arcade games the select button is used to deposit coins and start is used to start (obviously). Pressing both brings up the in-game menu, which controls button mapping, game volume, and the ability to save/load state. The system has internal memory but there's also a slot for an SD card.

Compared to the Retron 5 or Retro Freak, the customization options are pretty bare-bones. I really wish there was a turbo option because a lot of these games demand constant button-tapping. A difficulty setting would have been nice as well, as it seems the arcade games are all set to easy. I do appreciate the ability to save state per game as it effectively lets you preserve the high score tables of the arcade games. Still, I wish there was an auto-load feature, or at least a prompt. 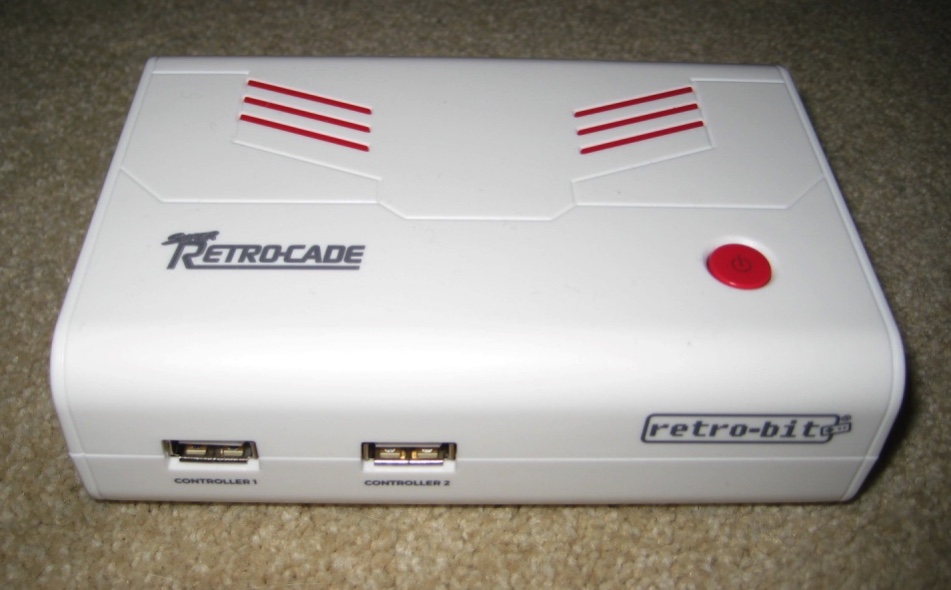 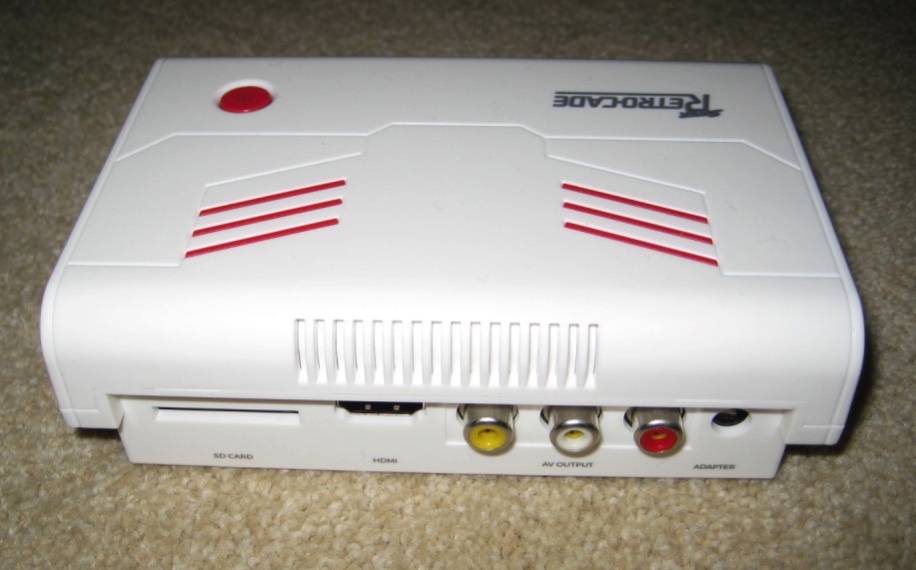 The game selection is terrific, although there are some curious gaps. The bulk of the games are arcade titles not previously available in home versions. There are shooters, platformers, fighters, racers, and even a few puzzle games. And if you like ninjas - boy oh boy are you in for a treat! Check out the publisher lineup: Data East, Capcom, Irem, and Technos. These guys are legit! In some cases you get both the console game and the arcade original, and it's fun to compare them. Most of the console titles hail from the SNES and NES, with one lone Genesis entry (Mercs).

Despite being the most jaded video game player on the planet, this collection fascinated me to no end. Even long-in-the-tooth titles like Double Dragon and Ghosts 'n Goblins felt fresh because I had never played the original arcade versions before. A few of the console titles like Codename Viper and Hammerin' Harry are so good I want to buy the actual carts! There are some great titles here I had never even heard of, including a few only released in Japan. Who knew Super BurgerTime was a thing? 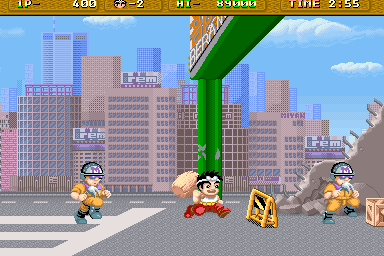 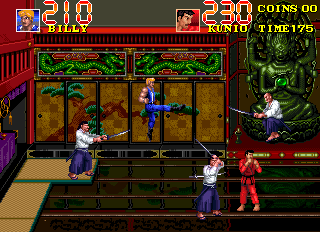 I played all of these to some degree and here are some of my personal notes:

Armored warriors (arcade): Side-scrolling fighter with giant robots pounding the crap out of each other!

Blade Master (arcade): This is the kind of game that gets me excited - an obscure medieval side-scroller I've never even heard of before.

Boogie Wings (arcade): Unique but misguided shooter where you can swing around a hook from your biplane. Pretty confusing.

BurgerTime (NES): Always loved this game but the controls feel a little stiff.

Cobra Command (arcade) - Never played the arcade version of this side-scrolling helicopter shooter before, but loving its explosive action.

Code Name Viper (NES): No idea how this side-scrolling jungle shooter with impressively large soldiers had escaped me until now.

Commando (arcade): I was expecting the arcade version to play a lot better, but it just looks sharper.

Dark Lord (NES): The only RPG in the collection. I became lost during its endless setup screens.

Double Dragon (arcade): Plenty of cool fighting moves but the controls are atrocious!

Double Dragon 3 (arcade) : Animation is choppy as hell but I love those gritty downtown storefronts. 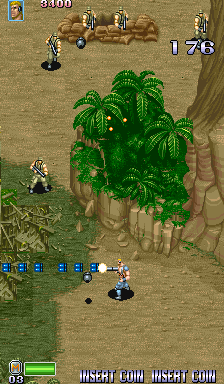 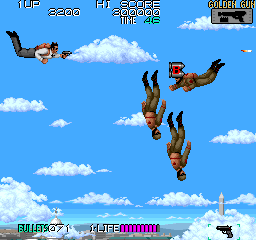 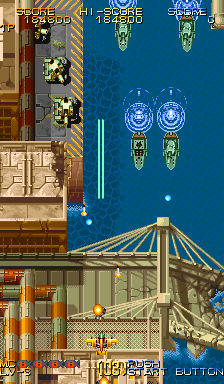 Dragon Breed (arcade): This side-scrolling shooter is bizarre! You ride on the back of a giant swirling dragon, using its body to block shots or knock down enemies.

Exciting Hour (arcade): Despite the laughable title this is one of the best-looking arcade wrestling games I've seen. Pretty repetitive though.

Fighters History (SNES): I can't get over how similar this is to Street Fighter 2! Still, I love the interesting background animations and the ability to deflect projectiles. I noticed the shoulder buttons felt a little tight while playing this.

Gunsmoke (arcade): Plays much different than the NES game due to narrow screen format.

Hammerin' Harry (arcade): Feels good to beat the living crap out of everything with a hammer. City skyline looks amazing and that cheesy "let's get busy" voice cracks me up.

Heavy Barrel (arcade): The firepower in this game is awesome, and the helicopter battle over the waterfall is epic.

Joe & Mac (arcade): Caveman platforming with impressively large dinosaurs. Much better than the plodding SNES version, which is also included.

Joe & Mac Returns (arcade): Not what I expected. Plays like a caveman version of Nightmare in the Dark (Neo Geo).

Ken Go (arcade): Now this is what I'm talking about. Side-scrolling ninja slash-a-thon with blood! Bring it!

Legend of Hero Tonma (arcade): This seems a lot different from the super-expensive Turbografx version.

Mercs (arcade): The Genesis version (also included) is very faithful, but I'm a sucker for those crisp arcade graphics.

Mighty Final Fight (NES): This is exactly what I expected - a scaled-down version of the SNES side-scrolling classic. Not too bad. 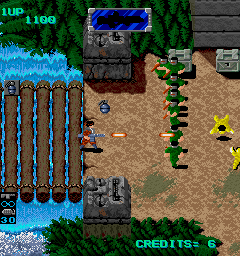 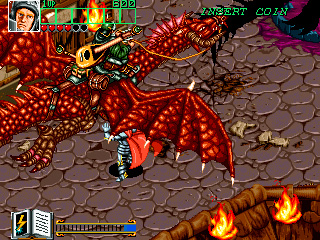 Mystical Riders (arcade): The side-scrolling starring a witch reminded me of the Cotton series.

Pirate Ship Higemaru (arcade): Roll barrels on a ship's deck to clear out pirates. Controls are a bit stiff.

R-Type 3 (SNES): The cartridge version commands big bucks, so here's your chance to play it for cheap.

Strider (arcade): Can't get over how well this action-packed hack-n-slash platformer has held up over the years. Amazing.

Super BurgerTime (arcade): I think I see why I had never heard of this before. No bueno!

Super Dodge Ball (arcade): All the fun of the NES game but without the slowdown and graphic breakup.

Super Side Pocket (SNES): This is disappointing. Same as the Genesis version, but the lounge music isn't as good.

Three Wonders (arcade): I was expecting this three-in-one package to suck, but all three games are surprisingly fun!

Thunder Blaster (arcade): So let me get this straight - the faster I tap the button the better my firepower? This should have a carpal-tunnel warning label.

Xmultiply: Surprisingly well-constructed sci-fi shooter set in freaky organic caves. Your ship has these crazy waving arms that let you fire all over the place.

On a final note, I should mention the arcade games have all the original startup sequences, including disclaimers about regional restrictions. Many games state on startup that it is a crime to play the game outside of the United States, but some state it's a crime to play them outside of Japan! You can't win! I guess it was just too much trouble to remove those.