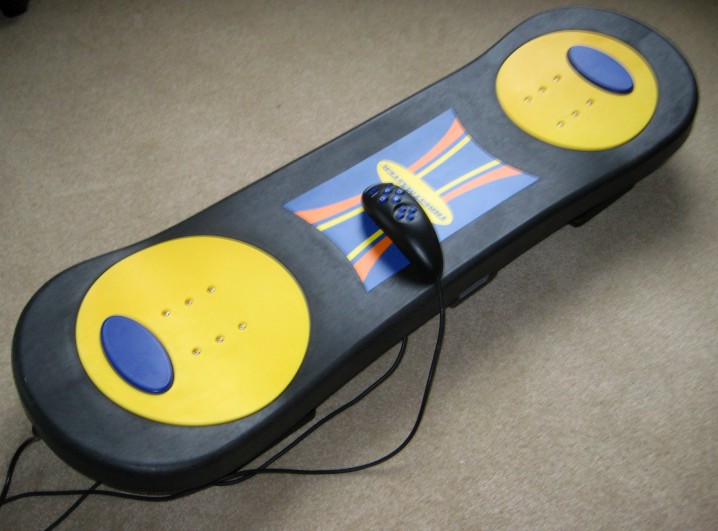 This snowboard-shaped controller really stands out as one of the more sizeable pieces in my collection. First things first - who the hell named this thing? I've done my share of snowboarding yet I don't ever recall doing any "thrusting" during this activity. Anyway, this controller is a pretty impressive-looking piece of hardware. At 34" x 11", it's nearly as big as a real snowboard, and it's quite sturdy. While standing on it and rocking from side to side you can carve the slopes in slowboarding games like SSX, Coolboarders, and Shaun Palmer's Pro Snowboader. It has just the right amount of "give" so you can lean from one side to the other without falling off (usually). I hear this board also works with skateboarding titles like Tony Hawk's Pro Skater, although I've never tried it.

Of course, there's more to snowboarding than carving, so the board comes wired to a small controller than fits in the palm of your hand. It contains the face and shoulder buttons you need to navigate menus and perform elaborate tricks. The board itself has two huge buttons on the front and back which you can press with your feet - in theory. Although these are meant to facilitate the "wind up" before jumps, it's a heck of a lot easier to use the X button on the controller. Steering is hard enough without having to shuffle your feet around the board. 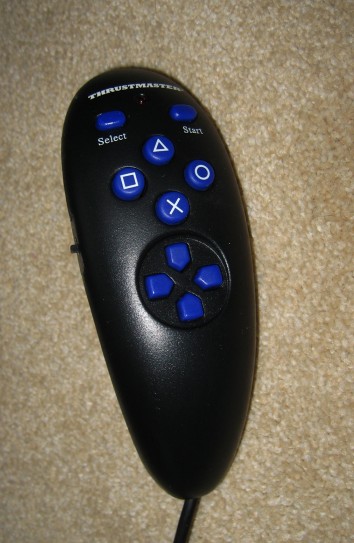 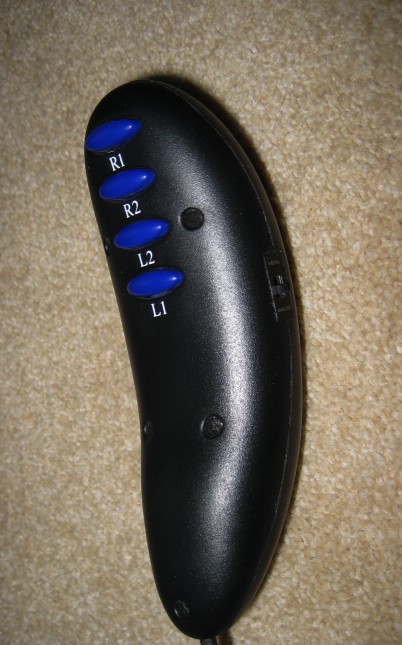 I love the concept of a snowboard controller, but in this case I'm afraid the execution falls short. Despite the fact that it has an analog mode (allegedly), the steering control has an all-or-nothing quality. Snowboarding requires a certain degree of finesse that the Thrustmaster sorely lacks. The inability to make slight adjustments to your form results in a lot of wild, side-to-side movements on the screen. I've even witnessed people fall off the controller trying to stay on course! Yes - thanks to the Thrustmaster, it's possible to suffer a snowboarding injury in the comfort of your own home!

Okay, so the Thrustmaster isn't all it's cracked up to be, but it's not totally worthless. Despite its lack of precision, it's still more true-to-life than playing a snowboarding game using a normal controller. I pull this thing out about once a year when there's snow outside and I'm in the mood. You won't break any high scores with this thing, but it's still possible to navigate a trail with some practice. It really presents an entirely new challenge to beat your best times while using this board. And if you display this controller in your game room, I guarantee people will ask you "what the [expletive] is that?!"

It's hard to recommend the Thrustmaster, but I still like the concept. Maybe someday a controller manufacturer will finally get it right. Until then, use this controller at your own risk and try not to bust your ass.