By The Video Game Critic
2/9/2011
Every hardcore gamer needs at least one solid joystick in their arsenal, and X-Arcade makes the best in the world. These heavy-duty arcade-quality joysticks are super responsive, comfortable, and practically indestructible. The only problem is, in the past you needed a different adapter for each console you wanted to use these joysticks with. X-Arcade's new multi-system adapters attempt to address that problem.

The multi-system adapters are clear plastic boxes with two wires coming out of one side. Each wire fans out with different types of plugs. In addition to multi-system support, the adapters offer two additional features:

The 5-in-1 adapter works with the Wii, GameCube, Playstation 1, Playstation 2, and Dreamcast. It's a great value. Although technically it supports five systems it only needs three types of plugs. The Playstation-shaped plug handles the PS1 and PS2, the GameCube plug handles the GameCube and Wii, and the third plug fits into the Dreamcast. I tested this adapter on a number of games including Street Fighter Alpha 2 (PS1/PS2), Thunder Force V (PS1/PS2), Ikaruga (GameCube), Tatsunoko Vs. Capcom (Wii), and Marvel Vs. Capcom 2 (Dreamcast). There was no detectable lag and controls were crisp and precise. You'd probably have trouble going back to a normal gamepad after playing these games with the X-Arcade. 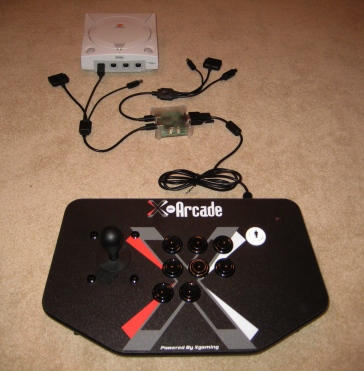 X-Arcade 5-in-1 Adapter connected to a Dreamcast.

The 2-in-1 adapter supports the Xbox and Playstation 3, which may seem like a pretty odd combination. To test the Xbox configuration I played Midway Arcade Hits Volume 1 using the dual-joystick option. Enabling this mode requires hitting a combination of two buttons, and while there's no visual feedback, it works like a charm. Playing Robotron this way was just like playing it in the arcade.

When using the Playstation 3 with the 2-in-1, you need to first press Start and Select in order to register the controller. Colored lights visible through the adapter housing provide immediate feedback. Virtual Fighter 5 was my test case, and the game seemed far more enjoyable than it was when I originally reviewed it. 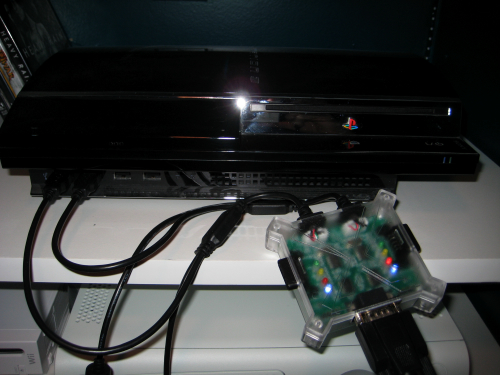 X-Arcade 2-in-1 Adapter connected to a Playstation 3.

X-Arcade did a fine job with these adapters and I would definitely recommend them to gamers with multiple systems. My only disappointment is that the Xbox 360 is not one of the supported consoles. You can read about the technical reason for that at http://www.xgaming.com/pages/x-arcade-xbox-360-available. Hopefully one day X-Arcade will add support for classic systems like the Saturn, Genesis, NES, and Atari 2600. They would be a natural fit!

Read More About It: