Attack of the Mania 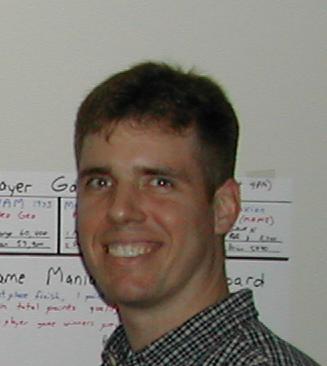 Once every hundred years, a phenomenon occurs that inspires the imagination of an entire generation. Video Game Mania III is nothing like that, but it was still pretty cool. On January 18, 2003 AD, twenty-two warriors from the greater Baltimore region engaged in an epic battle for video game supremacy. It's time to recap this historic event.
Click on Links Below

Bruce: ""I really built up my testosterone for this thing - I haven't had sex for a week!"

Bruce "I don't think I'd want to be known as the 'Super Monkey Ball' Champion"
George "Don't worry - you won't be."


"Use the button."
"What button?"
"The one that makes it do all that fancy sh*t"

"Use the whammy Luke!"

"I've never heard anyone use that kind of language while playing Pong before."