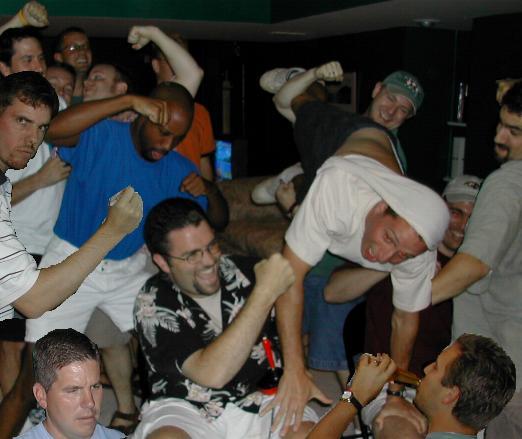 Ellicott City, MD: Un-F-ing believable! Those are the only words that can adequately describe the awesome video game tournament that was Video Game Xtreme One (VGX). Competitors converged from all over the world (read: Maryland) on 31 July 2004 to participate in this no-holds-barred, cutthroat video game competition. Relentless trash talk and excessive alcohol consumption signified this inaugural event. The competitive pressure mounted throughout the evening, officially reaching the danger zone by the time playoffs got underway. Finally, a shoving match between finalists Steve N and Mike F rapidly escalated into a full-scale riot, as bitter gamers took out their angry frustration on each other in a massive melee. When the dust finally settled, no one was seriously injured, although Rob Z did report a broken fingernail. Two combatants reported being touched inappropriately during the fracas, although both later admitted they "didn't mind" and "hope it happens again". All in all, VGX lived up to the hype as the most exciting video game spectacle in the history of video game-dom. Veteran old-school gamer Mike F took home first place, but only after a series of miraculous circumstances.

Video Game Xtreme was originally conceived as an experimental spin-off to the popular Video Game Mania (VGM) series of tournaments held each January in the People's Republic of Maryland. Unlike VGM, VGX was scheduled on a Saturday night in the middle of the summer, with plenty of alcohol provided to fuel the competitive spirit and verbal mud slinging. VGX also incorporated new rules that had a dramatic impact on the outcome. For one thing, players invited to VGX were encouraged to suggest a list of games to be included in the tournament. A subset of these games were scribbled on pieces of paper and tossed into a bag. Periodic draws from this bag determined the head-to-head games, fostering a sense of mystery and unbearable suspense. During the playoff round, a new game was chosen for each round.

The tournament began in earnest at 5PM, and the first few hours were relatively low-key as the 13 contestants jockeyed for position. After enjoying a hearty buffet at 7PM, the volume of beer consumed increased dramatically and trash talking intensified proportionately. By 10PM, the insults, accusations, and verbal abuse flew like a bad Jerry Springer episode (or is that a good episode?). Leading the charge was newcomer David B, who elevated the art of trash talking to a whole new level. Although Rob Z was his main target, no one was immune to his sharp tongue. By the end of the night, David would shock those in attendance by snagging the third place trophy in his very first video game tournament. Afterwards, in the ultimate display of defiance, he mocked his adversaries by drinking beer straight from his shiny new trophy - right in their faces!

The dramatic VGX finals pitted #2 seed Steve N and #4 seed Mike F in an epic battle. To put things in perspective, this match-up made the Tyson/Holyfield fight look like two 5-year-old girls slapping each other around on a playground. Steve "Duke" N selected the game at random that would decide their fate, which turned out to be Virtua Athlete 2000 for the Dreamcast, a game ideally played by four people. Per the new rules, both finalists had one opportunity to "veto" the selected game and force a redraw. Steve chose to immediately use his veto power, inadvertently playing right into Mike's hands. In an amazing twist of fate, Mike randomly drew Atari 2600 Combat - the one and only game he had originally suggested for VGX! Thus, Steve was doomed to play Mike on his "home turf". The variation of Combat used was tanks with guided missiles, and although Steve made it respectable, Mike was clearly in command during the entire battle. In the end, Mike F emerged as the official video game champion of the F-ing universe.

George C was arguably the most dominant player of the night, but as usual he came up short. He ranked first or second in 8 out of the 17 games (not including the playoffs), which is a pretty remarkable feat. Although he held the #1 seed in the playoffs, "G-man" was forced to execute an amazing come-from-behind victory to beat Marc G (#8 seed) and survive the first round (Smithereens, Odyssey 2). George knew he was doomed however when the game selected for the second round was Street Fighter 2 (SNES). Less skilled in fighting games, George was manhandled and beaten into submission by Mike F, who also defeated him in Street Fighter 2. On another interesting note, #3 seed Steve S was the one and only player upset in the first round, losing to #6 seed David B. After his devastating loss, Steve was utterly enraged when he heard that Street Fighter 2 was the game selected for the semi-finals. That game was Steve's bread-and-butter, and had he survived the first round, he would have cruised into the finals. But that is the nature of VGX - anything can happen and usually does.

"That was the practice game, right?"
- Most often quoted line at VGX1.

"Have you see Catwoman yet? Aww, that movie was awesome"
- Keith, clearly impressed by Halle Barry's latest flick.

David B: "I should make you my beer bitch for beating you in this game. BITCH GET ME A BEER!"
Eric S: "What kind?"

Rob Z: "I don't like how this feels in my hand. The shaft is too long. I like to be able to keep my thumb on top"
Keith: "Yeah, me too"
- Rob and Keith commenting on the shape of the Wico joystick, as opposed to the standard Atari 2600 model


"Frog Bog is better"
- Keith sticking up for the Intellivision version of Frogs and Flies.

"YOU'RE MY BOY BLUE!!"
- David B rooting for blue frog in Frogs and Flies

Steve N: "You wouldn't happen to have Madden in that bag would you?"
- Steve N, inquiring about the random game selection

"I'm telling you, Catwoman is worth seeing just for Halle Berry's walk. She is BAD."
- Keith, again

"Come and get your love, big boy!"
- Whoops - sorry, this was obviously not a quote from Video Game Xtreme. Actually, this quote was from Video Gay Xtreme, an event held at Rob's house last month. Not sure how that got mixed in. Please disregard!

George: "Dammit! There's something wrong with this Colecovision controller"
David B: "Aww, c'mon now George - nobody likes a whiner!"

"This gay music is throwing off my game!"
- David B, commented on the VGX music mix which included Kylie Minogue

David B: "Who's controlling the guys in the red trousers?"
- Asking about the 2600 Ice Hockey

John: "Hey, playing this fishing game is just like w---ing off!"


Dave B: "So, what other games are good for the Dreamcast?"
Dave M: "I can't think of any now, but believe me, there are a LOT of them!"

Rob (to David B. during first round of playoffs): "Dude, hurry up and lose! C'mon, Steve - beat him!"
David B (after winning): "Here, take this quarter and go place Crystal Palace ya f---ing Nancy!"

"I can't f---ing believe this s---! Holy mother of f---!"
- Steve S after being eliminated from the playoffs and hearing that the next game was Street Fighter 2 - his specialty.

"For all you kids!!"
- Someone imitating Ryu in Street Fighter 2 performing a Dragon Punch.

"Hey Dave, when I buy Catwoman on DVD, I'll let you borrow it"
- Keith, going on about Catwoman.

"Always a bridesmaid never a bride!"
- George after being eliminated in the semi-finals.

Dave M: "Okay everybody, I'm going to ask for some group participation now"
Steve S: "Uh-oh, I don't like the sound of that"

Dave M: "ALRIGHT EVERYBODY - THIS IS IT!! THIS GAME IS FOR THE CHAMPIONSHIP OF THE UNIVERSE!! EVERYBODY REMAIN CALM!!!"


"He chose... poorly."
- Ancient knight of Last Crusade upon hearing about Steve N's decision to veto Virtua Athlete in the finals.

Rob: "I would have gone all the way if I hadn't been LOCKED out of Gran Turismo!"


Marc G: "Oh yeah? How many points did Eric score?"
Steve S: "Eric got zero points!"
Eric S: "Steve, I think that was a rhetorical question"

Eric S: "Dave, you're not going to post the fact that I didn't score any points on the web site are you?"
Dave M: "Yes Eric, but don't worry, no one will notice."

"You always have to watch out for the quiet ones"
- David B after Mike F won the championship.

Rob Z (to David B): "Dude you're horrible. Nice Ford Focus you're driving. You have got to be the worst gamer ever..."
David B: "I just won third place, I got a trophy bitch! How many of these things do YOU have Rob? ANSWER THE QUESTION BEEYATCH!"

"This one's for you guys."
- David B drinking beer out of his trophy cup in open display of defiance to Rob and Marc